Here’s What We Know so Far: 10 Most Horrifying Facts About the Uvalde Texas School Shooting

It's been several days since a small Texas town was rocked by the unimaginable: a horrific school shooting that left 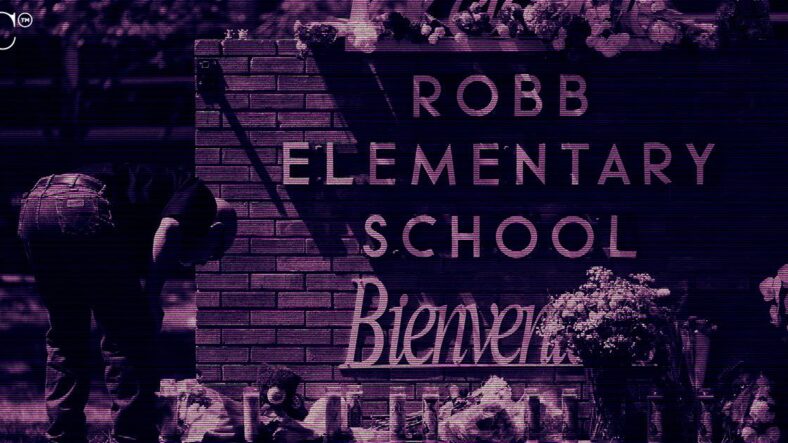 It's been several days since a small Texas town was rocked by the unimaginable: a horrific school shooting that left 21 dead, most of those fourth grade children.

In the immediate aftermath of the shooting, chaos ensued and mixed messages were spread from officials and witnesses. Now, days later, what really happened is coming into clearer focus, and it's painting a picture of even greater horror and failure than originally was imaginable.

Signs were missed, neon breadcrumbs left by the shooter in the days leading up to the attack, police turned their ire on desperate parents and failed to breech the school for long agonizing minutes; here's what now know about what happened on that fateful day in Uvalde, Texas, and how deeply the children at Robb Elementary School were failed by those promised to protect them.

The first most shocking thing we've discovered since the shooting occurred on May 26 are the names and faces of the 19 children and 2 teachers who were killed. The children were all 9, 10, or 11 years old and both teachers were in their 40's. The kids were full of life, promise, and a summer vacation just days away. Learning who they are and about the lives cut short is the most painful revelation to come out of the Texas tragedy, but the most important.

Here are their names:

Heartbreakingly, DNA identification was necessary for many of those killed due to the damage done by the shooter's bullets.

2. What the Police Did

In the wake of the shooting, questions are being raised about the way police reacted to the shooting. Ultimately, it was a Border Patrol agent who shot and killed the shooter, while local police waited outside.

Here's what we know about the sequence of events:

Initially, officials reported that there was an armed resource officer on scene but that has since been proven to be untrue.

When the shooter entered the school, it was through an unlocked door. Associated Press reports, "But the first police officers did not arrive on the scene until 12 minutes after the crash and did not enter the school to pursue the shooter until four minutes after that. Inside, they were driven back by gunfire from Ramos and took cover, Escalon said.

The crisis came to an end after a group of Border Patrol tactical officers entered the school roughly an hour later, at 12:45 p.m., said Texas Department of Public Safety spokesperson Travis Considine. They engaged in a shootout with the gunman, who was holed up in the fourth-grade classroom. Moments before 1 p.m., he was dead."

Before the school shooting in Columbine, Colorado, police protocol required local responding officers to wait for backup before entering an active shooting scene. However, after that incident, protocol was changed. Now, officers are expected to enter as soon as they have arrived and assessed the scene when lives are at risk.

So why did police wait for over an hour while the shooter roamed the school, slaughtering at will? It's a question with no satisfying answers, but responding officers did violate procedure as they sat outside waiting for more specialized forces.

3. Who the Shooter Was

The murderer “cut up his face with knives for fun,” drove around shooting random people with his bb gun, tried to fight people in the park. Cops visited routinely. He harassed the women he worked with. People said his aggressiveness kept escalating.https://t.co/x13xHwrAfD

We also now know the shooter's name: Salvador Ramos. Locals say he was quiet and kept to himself. When he did speak, he was often aggressive; mostly towards women.

In the days leading up to the shooting, Ramos shared pictures of assault-style weapons that he bought and sent bizarre messages on social media. Both rifles he used in the shooting were purchased legally just days before, in celebration of his 18th birthday.

Immediately preceding the rampage, Ramos argued with his grandmother (who he lived with) about failing to graduate from high school, shot her, and then got in the truck before ending up at Robb Elementary. Ramos' grandmother has survived, but is in critical condition.

Ramos recently lost touch with a friend who said his behavior had begun to "deteriorate," and the friend admits that Ramos used to drive around and shoot at people randomly with BB guns. Ramos was bullied as a child due to a stutter and lisp, but so far does not appear to have any criminal or official mental health history.

A mom of two children at Uvalde was put in handcuffs after urging police and law enforcement to enter the school.

Once freed from her cuffs, she jumped the school fence, ran inside and sprinted out with her kids.

While the police were taking cover outside, parents were begging them to enter the school. According to witnesses on the scene, some parents were even begging the police to hand over their bulletproof vests and guns and offering to go in for them.

Several were reportedly threatened with arrest, police focusing their ire on desperate parents instead of the shooter who continued to rampage inside the school. Texas officials promise to review what protocol may have been violated, leaving many in the community feeling unheard.

EXTREMELY heartbreaking and come with deep sorrow to say that my Tia Irma’s husband Joe Garcia has passed away due to grief, i truly am at a loss for words for how we are all feeling, PLEASE PRAY FOR OUR FAMILY, God have mercy on us, this isn’t easy pic.twitter.com/GlUSOutRVV

Compounding tragedy for one particular Uvalde family, the husband of slain teacher Irma Garcia has now died from a heart attack just days after his wife was killed. They leave behind four children. Joe and Irma were childhood sweethearts.

Buzzfeed shares, "One of Irma's nephews, John Martinez, announced in a tweet Thursday that Joe had 'passed away due to grief.'

'I truly am at a loss for words for how we are all feeling,' Martinez wrote."

6. Governor Abbott and the NRA

In the midst of the heartache and tragedy, political heavyweights like former President Donald Trump, Texas Governor Greg Abbott and Texas Senator Ted Cruz are all slated to speak at the NRA leadership forum this weekend.

It's a jarring juxtaposition that has many crying foul. Just days after a horrific slaughter by gunfire, these political leaders are expected to extoll the virtue of unregulated gun ownership; an unimaginable situation in any other country in the world.

Although Trump and Cruz are still expected to appear in person, Abbott has since agreed to speak in a pre-recorded appearance instead of showing up in person. It's a small concession, but many still consider it nowhere near enough. Abbott plans to speak on the ground in Uvalde instead, clearly trying to please two very at-odds voter bases and failing to please either.

Victor Escalon, a regional director for the Texas Department of Public Safety, said he couldn’t say why no one stopped the deceased gunmanhttps://t.co/Aeg1Nc3g6o

One Texas law enforcement official is facing extreme social media pressure after a comment many see as insensitive, especially considering the lackluster response by police which allowed the rampage to last for over an hour.

Daily Dot reports via MSN, "'I'm a father. I can't go home tonight and hug my kids. That hurts,' [Department of Public Safety director Victor] Escalon said. 'The members behind me—our family members. Their kids. It's tough. It's hard.'"

Escalon was blasted, with online comments reading many variations of, "at least your children are alive at home to be hugged later."

It's a small slip-up in the grand scheme but continues to add to the overall picture that Texas officials are disconnected and clueless about the magnitude of this loss. Additionally though, Escalon continues to seem baffled by answers he should be ready to provide by now – frustrating media and viewers who are trying to get answers.

8. The Gunman Left an Obvious Trail of Signs

Although there were no past criminal or mental health records to draw from, Ramos did leave some signs including a message on social media 30 minutes before it all started claiming he wanted to shoot his grandmother.

In addition, shortly after purchasing the weapons, Ramos made bizarre posts and comments online.

NY Post shares, "The same account shared a photo of two rifles lying side by side to its Stories. The account tagged another user in the photo.

That user, @epnupues, said Ramos was a total stranger who tagged her in the gun photo and messaged her that he 'got a lil secret.'

The Instagram user, who said she doesn’t live in Texas, questioned why he tagged her in the pic of the rifles and said she found it scary that he tagged her.

'You gonna repost my gun pics,' @sal8dor_ direct messaged the girl on May 12.

'what your guns gotta do with me,' she replied on Friday.

'Just wanted to tag you,' he said back.

The girl asked “about to what” to which he answered, 'I’ll tell you before 11.'

He said he’d text her in an hour and urged her to respond.

'I got a lil secret I wanna tell u,' he messaged with a smiley-face emoji covering its mouth.

9. The Focus on Mental Health

Now, many in Washington are turning to easy answers to soothe a nation roiling with grief and rage. Out of the mouths of many senators has come promises to address the "mental health" crisis in America.

While the mental health infrastructure in the United States undoubtedly needs attention, it's only one piece of the puzzle. Other countries have people who are mentally ill, so it's not unique to the US. And there's no mental health history to turn to for Ramos; he passed the necessary background checks to purchase his weapons legally.

That leaves one more topic to address, which at least half of politicians in Washington just won't do: gun law reform. Although a vast majority of Americans support expanded background checks and possibly regulating ammunition, a strong gun lobby in Washington makes politicians sluggish to move and hesitant to listen to the will of the people.

10. Even Ukraine Stops in Horror

Perhaps one of the most remarkable moments that was quickly washed over by more urgent headlines came out of Ukraine.

In a country beset by war, dealing with an invasion by a much larger nation, and grappling with horrors of their own, Ukrainian officials reached out to send their condolences and yes – shock – to the Uvalde community.

It's a staggering reminder that the slaughter of children in schools is a rare and horrifying occurrence, even to those currently under siege and being bombed daily.

As more information trickles in by the day, none of it's good. Instead of any singular moment where we can say, "well that's not as bad as we feared," it's becoming worse as the hours pass.

In a country filled with heartbreak, grief, and tired of the worst – will this finally be the impetus needed for change? Time will tell, but in Washington, politicians are giving themselves 10 days to come up with a common sense solution. Unfortunately, for the families of 21 loved ones in Uvalde, Texas, 10 days or 10 years – it no longer matters.