Las Vegas welcomed Virgin Hotels Las Vegas, part of Curio Collection by Hilton, to its pantheon of resorts March 25 as the doors 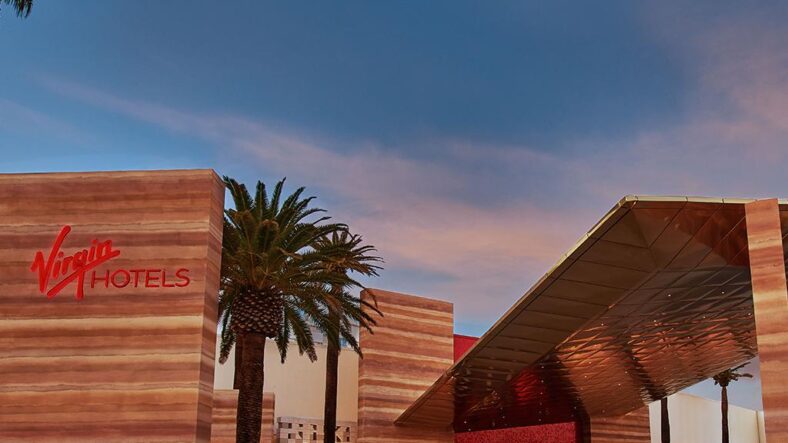 Las Vegas welcomed Virgin Hotels Las Vegas, part of Curio Collection by Hilton, to its pantheon of resorts March 25 as the doors swung open on the completely remodeled property, formerly the Hard Rock Hotel & Casino. It was a star-studded affair just like the old days as Las Vegas socialites, entertainment executives, top food and beverage industry talents and a sprinkling of reality and television celebrities, frolicked into a frenzy all day and all night long throughout the first 24 hours. Virgin Hotels Las Vegas is owned JC Hospitality and its casino is operated by Mohegan Gaming & Entertainment. This casino marks the entrance of tribal gaming into Las Vegas.

For those not familiar with the portfolio, “Virgin Hotels is a lifestyle hospitality brand that combines heartfelt service, straightforward value and a seamless, personalized hotel experience with the track record of innovation and smart disruption that Sir Richard Branson’s global Virgin Group has pioneered for 50 years. Each property intermixes a passion for food and beverage with music and culture, fusing with the local landscape and providing a vibrant and inclusive environment for travelers and locals alike.” Virgin currently has properties in Nashville, Chicago and Dallas with New York, New Orleans, Miami and Edinburgh to follow.

CELEB checked in to check out the opening day festivities and here is what went down. 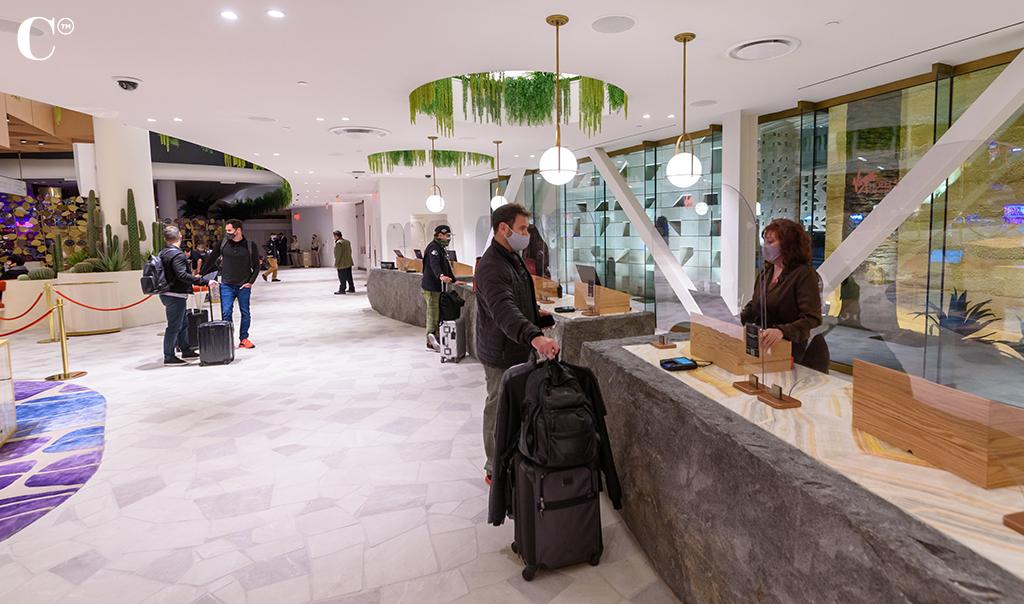 Virgin Hotels Las Vegas has three hotel towers, all of which have been completely remodeled. The Ruby Tower lobby, which is where invited guests checked in features a spectacular modern desert aesthetic. Many likened it to the funky vibes of the mid-mod Parker hotel in Palm Springs. Enter through two massive yet welcoming red doors and pass through the arched entryways, to the long undulated sofas and circular chair swings—all of which craft the whimsical vibe of Virgin Hotels entry into the Las Vegas market.

One reccuring design feature is the use of cacti—everywhere. A cactus in the desert might seem obvious but they appear in playful and unexpected ways throughout the property.

After checking in, we made our way to the Canyon Tower, where our room was located. The King Chamber showcases many of those cool touches for which the Virgin Hotels brand is known. There is a striking orange velvet corner sofa in this room type, as well as a vanity table with selfie-perfect lighting. Plus, outlets and USB ports can be found everywhere, even in the base of the sofa. The custom-designed hybrid bed features a built-in corner chair back that is perfect for lap-topping in bed. The hallway, closet and bathroom are separated into a dressing room space with a privacy door that keep the sleeping quarters quiet and secluded. 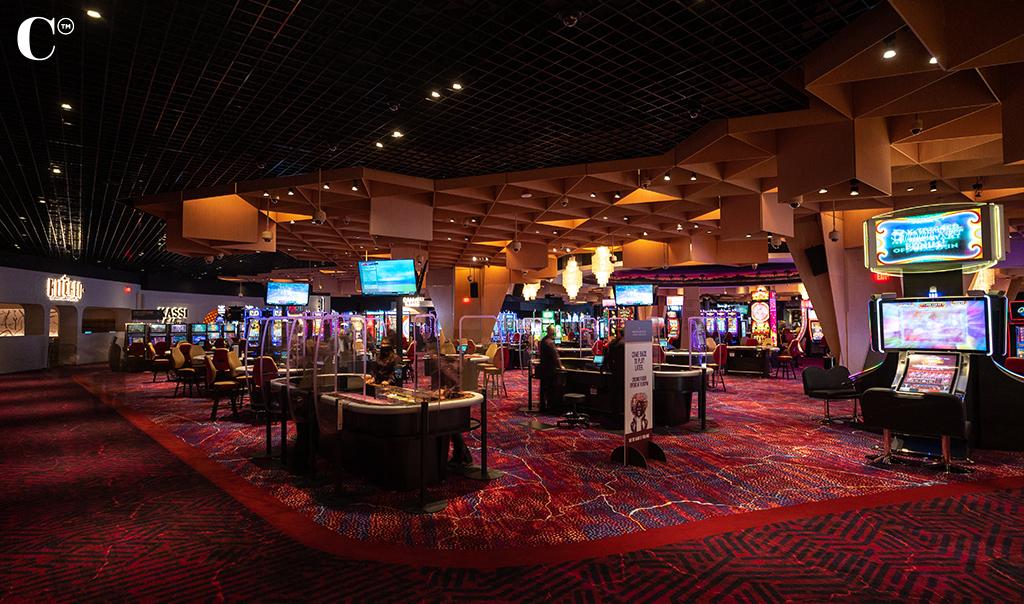 According to one guest, they found a bag of $100 chips on the floor of the casino, prior to opening. This very honest patron got some major karma points for returning them to the casino cage. As all the machines were turned on and tested and the dealers took their spots, the energy began to bubble. However, there was no gambling until the doors officially opened. The 60,000-square-foot Mohegan Sun Casino Las Vegas features 650 slots and over 150 table games. The sportsbook is by Betfred, also a first to market. 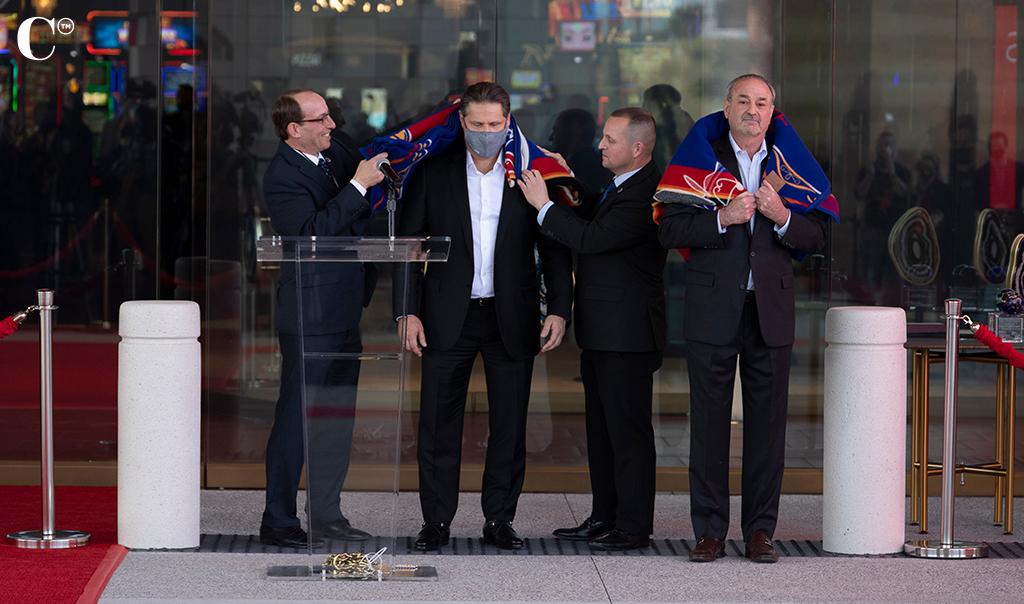 Richard ‘Boz’ Bosworth, president & CEO of JC Hospitality, owner of Virgin Hotels Las Vegas; Ray Pineault, COO of Mohegan Gaming & Entertainment, James Bermingham, CEO of Virgin Hotels and Danny Hughes, president of Hilton Americas gathered before a crowd spectators eager to get the first look inside. “The opening of Virgin Hotels Las Vegas is just one more positive sign of the recovery of the Las Vegas economy,” says Bosworth. “We’re excited to have our team members back to work as we prepare to welcome locals and tourists alike at our completely redesigned resort.

In traditional fashion, Tribal Councilors Joe Soper and Ken Davison presented a gift to Bosworth and Lou Serafini, president and Chief Executive Office of Fengate, including a hand-crafted Mohegan gourd, sweetgrass and a Mohegan blanket.

Following the remarks, the doors were unlocked and the masses poured in, along with drum line and procession of performers, such as slit walker, acrobats, dancers and exciting characters.

Throughout the night, celebrities, were spotted enjoying the casino and toasting the celebratory evening. Actor and TV host Mario Lopez tossed the ceremonial first dice roll at the craps table and “The Bachelor” Matt James and Chrisell Stause of “Selling Sunset” and “Dancing with the Stars” were spotted trying their luck at blackjack and craps. Stars of “Vanderpump Rules,” Tom Sandoval and Tom Schwartz hit the Desert Star Bar and sipped on cocktails. “Real Housewives of New Jersey” star Melissa Gorga was joined alongside husband Joe Gorga and friends celebrating her birthday at One Steakhouse. Both Matt James and Chrisell Stause hit Nobu for the world-renowned sushi and cocktails. 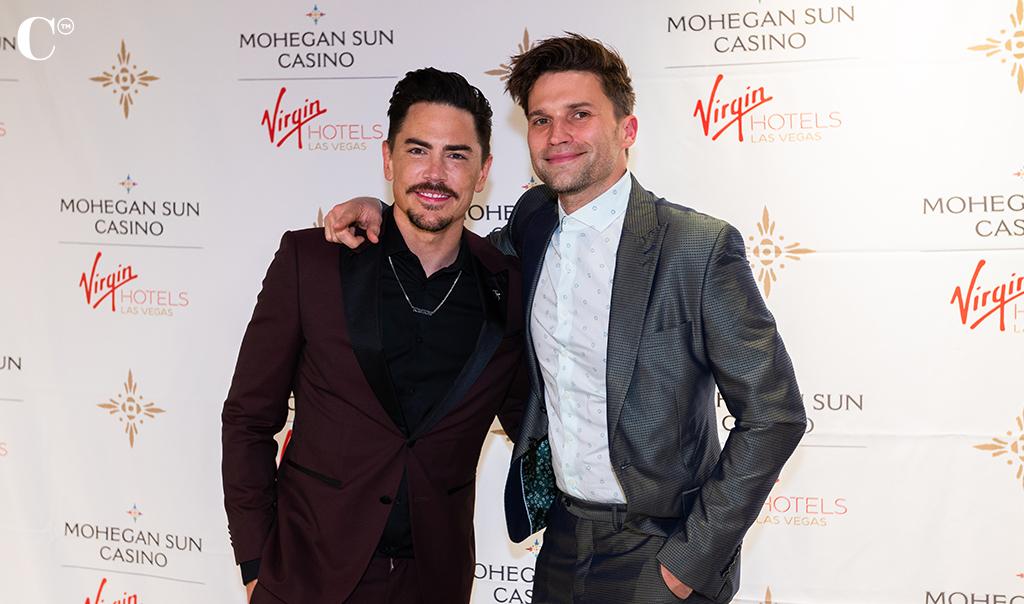 In true Vegas fashion, you can’t open the doors of anything without having a party. The celebration for invited guests, featured a stage with a live band and took place on the Event Lawn, formerly the infamous Rehab Pool in Hard Rock days. Virgin Hotel Las Vegas buried that past like a time capsule and now it is a grassy area for large events.

Dinner at ONE Steakhouse, 9 P.M. 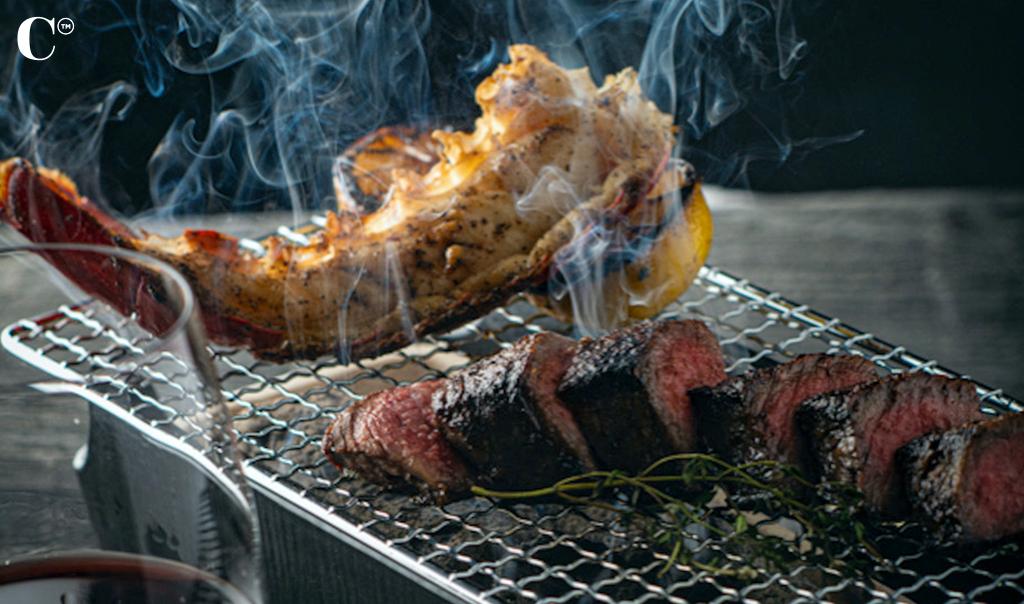 Virgin Hotels Las Vegas has an all-star lineup of restaurants. Now open are Casa Calavera, Kris Yenbamroong’s Night + Market from Los Angeles Nobu and One Steakhouse from Michael and David Morton. Celebrity guests flocked to One Steakhouse opening night. Mario Lopez, UFC’s Dana White, “Real Housewives’” star Melissa Gorga and the coach of the Las Vegas Raiders, John Gruden, were among the celebrities who joined brothers and restaurateurs Michael Morton and David Morton for the grand opening of One Steakhouse.

The bar, which is blanketed by an awning of a striking 3,000-piece LED chandelier, was buzzing with masked partiers who toasted the hotel’s opening, a stunning and complete transformation in what used to be the Hard Rock Hotel and Casino Las Vegas. The brothers were joined by their extended family, including their mother, Zorine Morton, who was traveling for the first time out of her hometown Chicago following her second vaccination shot; Jenna Morton; and their three children.

Other guests included Bosworth, Resorts World President Scott Sibella, as well as Linda and Beverly Hilton. Those lucky enough to get a reservation opening night dined on One Steakhouse’s steaks, including a 16-pound tomahawk ribeye that is carved tableside by Executive Chef Patrick Munster and serves up to 12 people. Other favorites from opening night included Alaskan king crab pasta made with miso butter and topped with lemon breadcrumbs, pan-roasted Alaskan halibut served in a tomato broth with olive relish, and baked short rib rigatoni, made with whipped burrata, roasted tomato sauce and basil.

Drinks at The Bar at Commons, Midnight 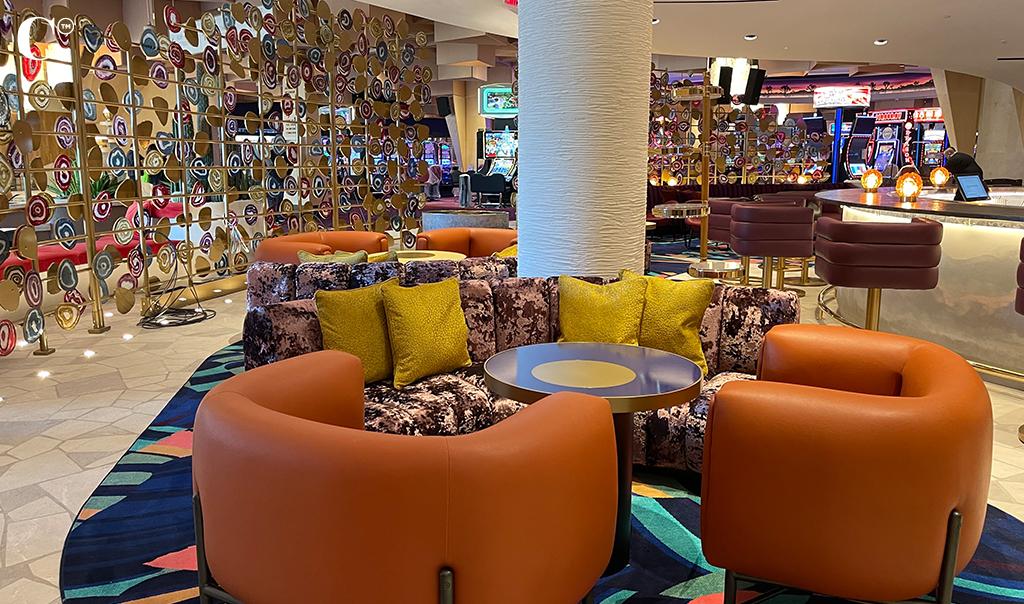 After dinner, the action was at The Commons as a DJ pumped up the crowd on a turntables built into a grand piano.

Breakfast at The Kitchen, 9 A.M. 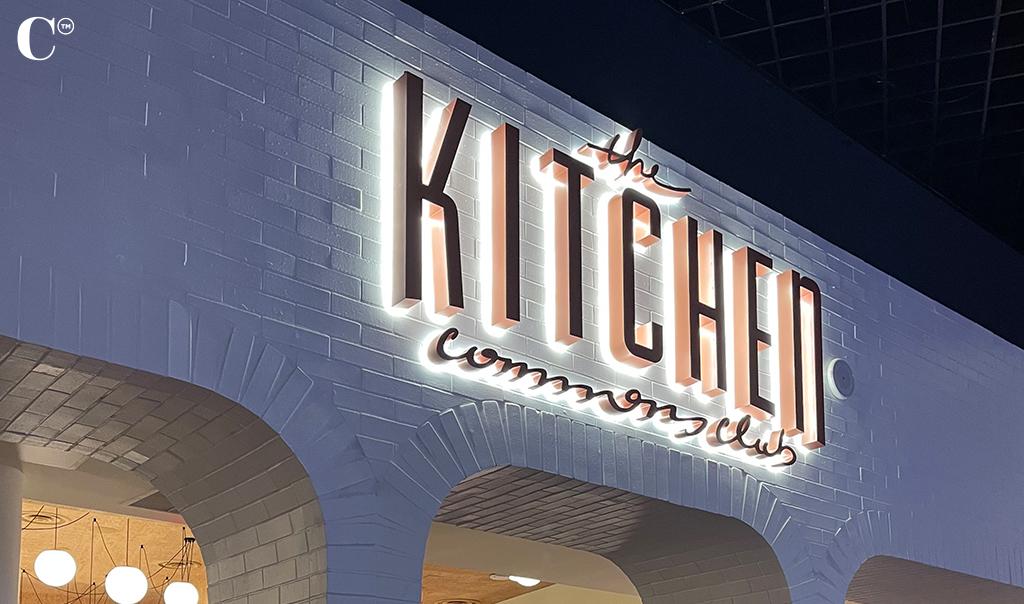 The next morning, the scene was at The Kitchen at Commons Club where breakfast and Bloody Marys were served to cure the previous night’s revelry. Chef David Werly crafted the perfect cafe menu with all the favorites and the fluffiest pancakes one could imagine. 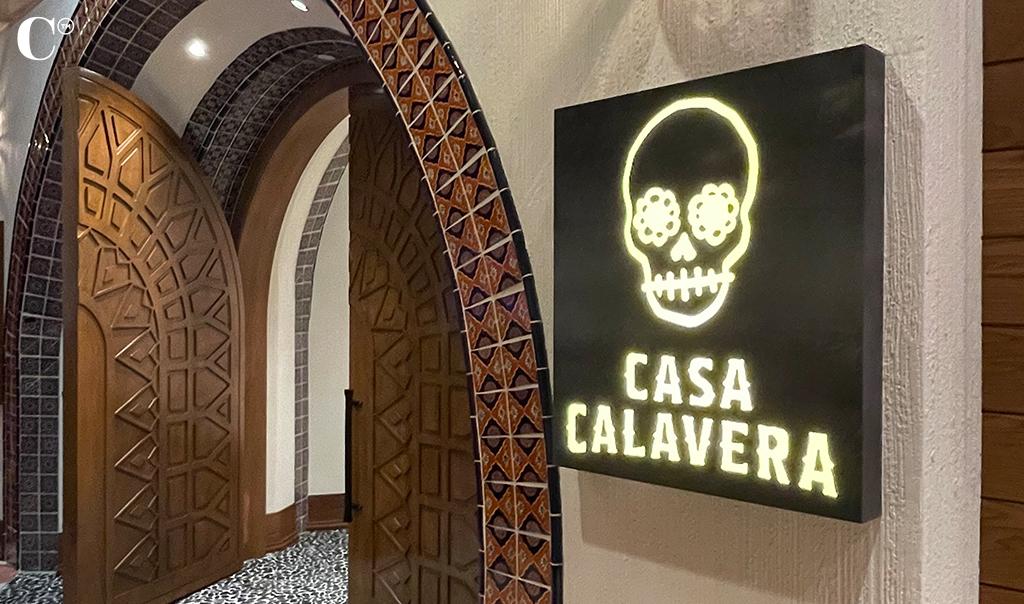 Nothing like back to back meals and no trip to Virgin Hotels Las Vegas is complete without a visit to Hakkasan Group’s Casa Calavera. Imported from Cabo, this Mexican restaurant has tables right in the sand to give the feeling of beachside service. Tacos, guacamole and margaritas are the ideal way to kick off a beautiful story with a new Las Vegas favorite.

Virgin Hotels Las Vegas representatives say this was just the soft opening and that a grand opening celebration is being planned for late spring based on projected increased gatherings and potential lifting of entertainment restrictions.