Yesterday, we reported that 90 Day Fiance stars Paul Staehle and Karine Staehle had gotten into an argument that ended up with Karine calling the police. Now,

Yesterday, we reported that 90 Day Fiance stars Paul Staehle and Karine Staehle had gotten into an argument that ended up with Karine calling the police.

Now, just a day later, Paul has shared that he has an STD after going to the hospital- and claims he did not cheat on Karine- and that Karine has taken a restraining order on him. And, in a breaking news item, he has claimed Karine is MISSING and that a sheriff search for her is underway.

It All Started With A Call By Karine Staehle

To review, when Karine called the police Paul decided to live stream the entire thing on his Instagram story. Paul also decided to call his Mom to come over during the incident, which fans also saw happen on Instagram live.

During the ordeal, he made a number of bizarre comments. These included stating Karine had an open case with Child Protective Services, his instance that he wanted to go therapy with Karine (but she was resistant), and that he had cameras all around his house that were “1080P.”

Most relevant to today’s bit of news, though, is that Paul was insistent that Karine had cheated on him. Paul also noted their argument began when he saw a conversation on her phone between her and a lawyer where she was discussing divorce and child support.

While things seemed quiet on the Paul and Karine front for at least a few hours, that all took a turn last night.

Taking to his favorite form of social media, Paul began with sharing the following: 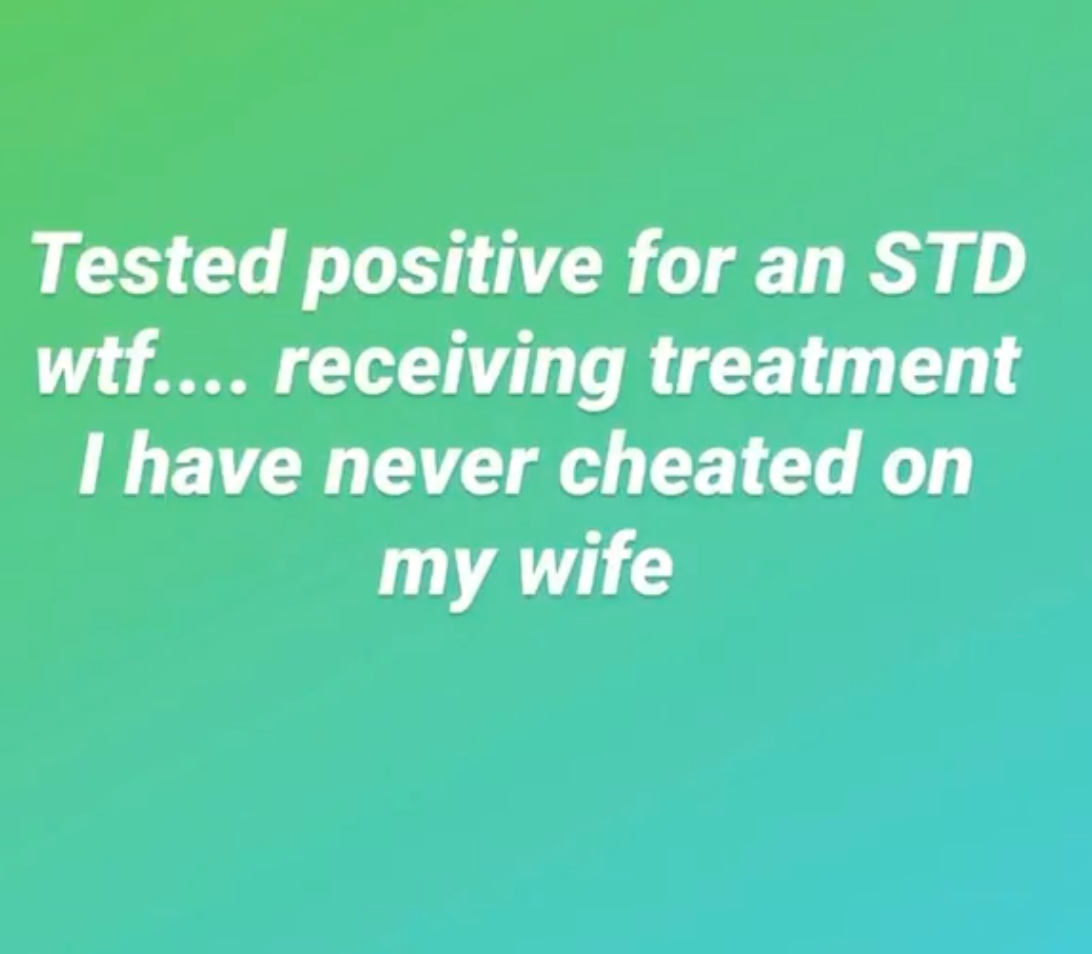 As you can see, he claims he “tested positive” for an STD even though he “never cheated” on Karine. Clearly, he was implying that Karine had cheated.

He followed up documenting the ordeal from the hospital, as can be seen in this video:

“Hey, so I want to let you all know I’ll be alright. I came back,” Paul began with sharing from the hospital.

Paul added that “I never cheated on Karine ever but apparently I tested positive for an STD. Hopefully, everything goes well and I’ll be out of here.”

Upon leaving the hospital, though, Paul had even more news to reveal.

Karine Takes Out A Restraining Order!

“Hey you guys,” Paul went on to share. “Karine filed a full restraining order on me. I’m not allowed to be around her or my son within 500 feet of them. At all. So- yeah, that’s how she does it.”

Paul then showed off a copy of the restraining order, which we have zoomed in on to get the details: 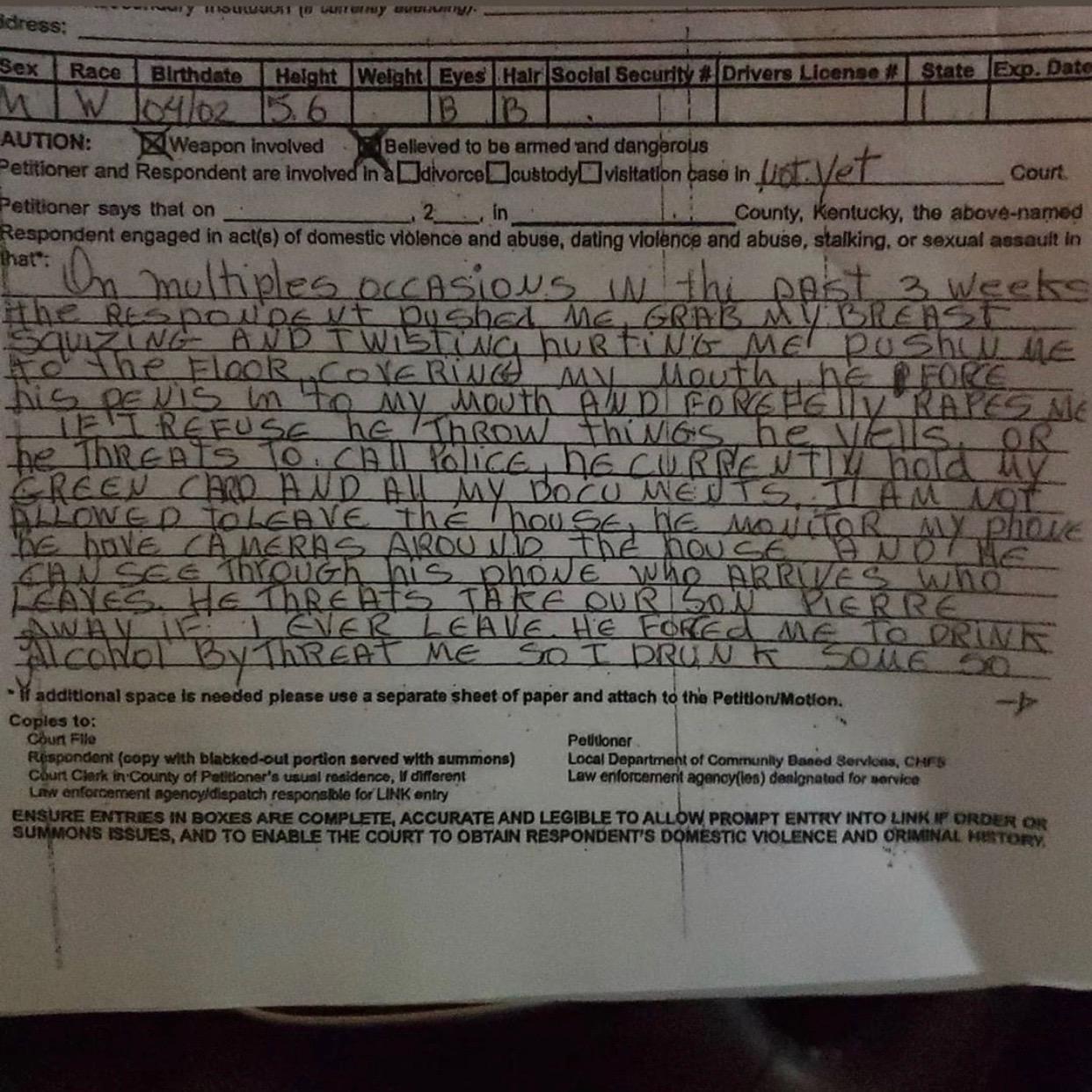 In the first part of the restraining order that Paul shared, Karine goes on to state that “On multiples occasions in the past 3 weeks the respondent pushed me, grab my breast squizing and twisting hurting me pushin me to the floor covering my mouth. He force his penis in to my mouth and forcefully rapes me. He threats to call police. He currently hold my green card and all my documents. I am not allowed to leave the house, he monitor my phone. He have cameras around the house and he can see through his phone who arrives who leaves. He threats our son Pierre away if I ever leave. He forced me to drink alcohol by threat me so I drunk some so he calm down.” 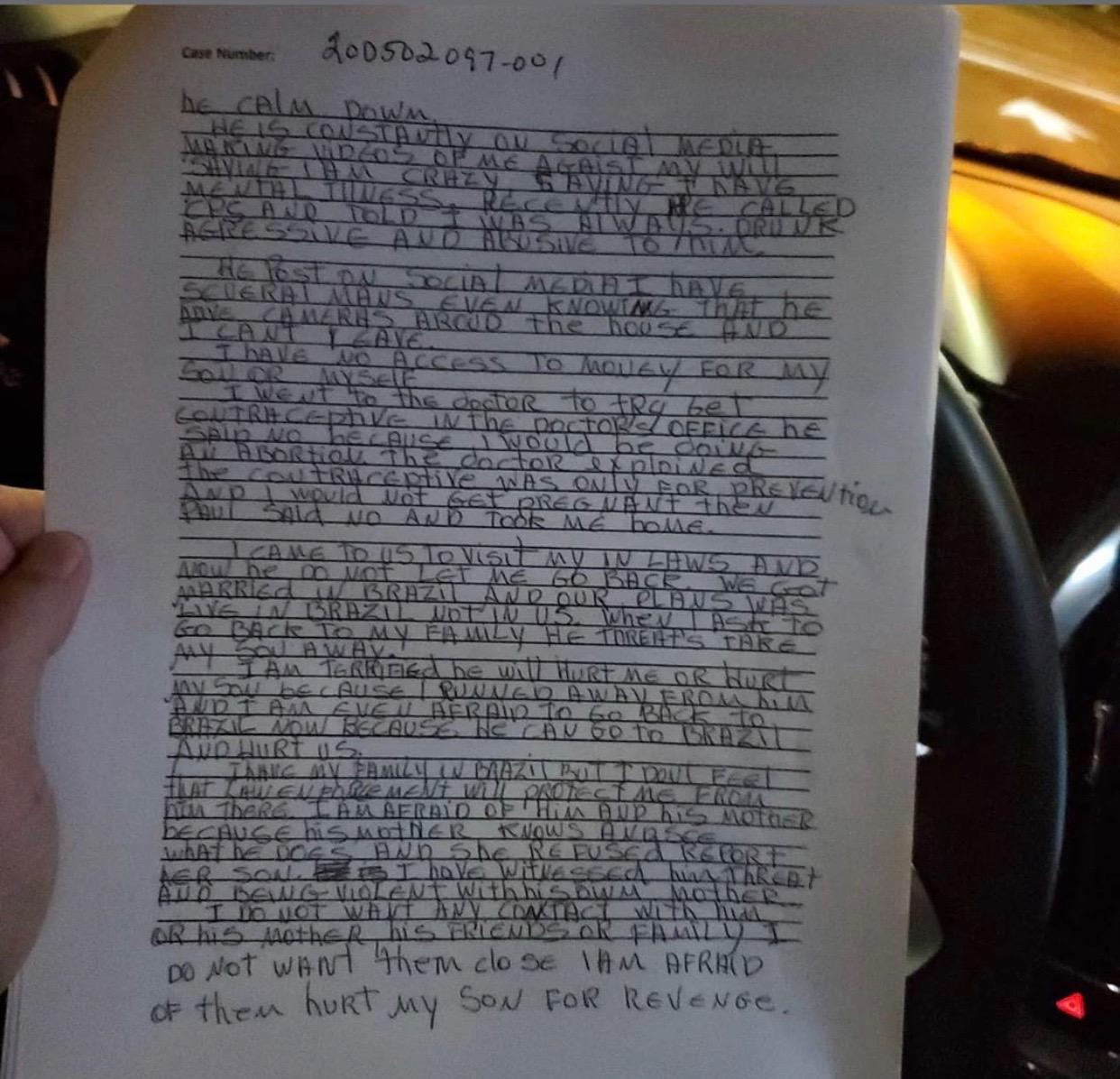 As can be seen in the second part, it continues reading:

“He is constantly on social media making videos of me against my will saying I am crazy, saying I have mental illness. Recently he called CPS and told I was always drunk, aggressive, and abusive.”

“He post on social media I have several mans even knowing that he have cameras around the house and I can’t leave,” the restraining order notes continue. “

“I have no access to money for my son or myself,” Karine continues writing. “I went to the doctor to try get contraceptive in the doctors office he said no because I would be doing an abortion. The doctor explained the contraceptive was only for prevention and I would not get pregnant then. Paul said no and took me home.”

“I came to US to visit my in laws and now he do not let me go back,” Karine also added. “We got married in Brazil and our plan was live in Brazil not in US. When I ask to go back to my family he threat’s take my son away.”

Karine goes on to share that “I am terrified he will hurt me or hurt my son because I runned away from him and I am even afraid to go back to Brazil now because he can go to Brazil and hurt us. I have my family in Brazil but I don’t feel that law enforcement will protect me from him there. I am afraid of him and his mother because his mother knows and see what he does and she refused report her son. I have witnessed him threat and being violent with his own mother. I do not want any contact with him or his mother his friends or family. I do not want them close. I am afraid of them hurt my son for revenge.”

As can be seen in the above video, Paul has now claimed that the sheriff stopped by and Karine is missing.

Specifically, he stated “Hey everyone. It’s gonna be a little scary. I can’t believe I have to make this message. It’s got me really upset right now.”

“They are looking for Karine” Paul added, “They came here looking for her. Obviously, I don’t know where she’s at because I got a PO [Protective Order]  and what she does is her business at this point. I’m very scared for her and the child, as was the Sheriff that was here.” 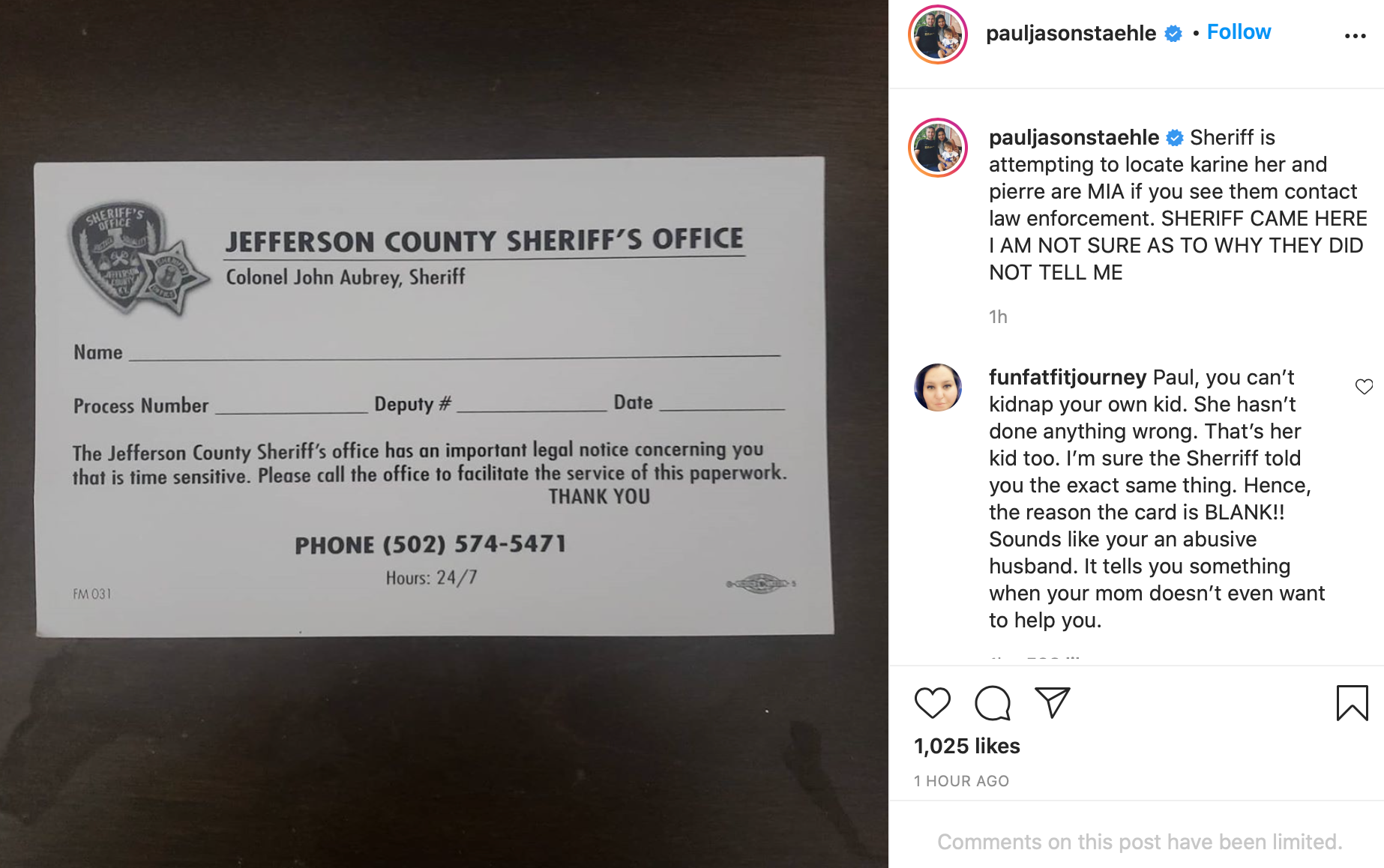 Paul also posted the above on Instagram, writing “Sheriff is attempting to locate karine her and pierre are MIA if you see them contact law enforcement. SHERIFF CAME HERE I AM NOT SURE AS TO WHY THEY DID NOT TELL ME.”

As Paul has a restraining order against him, he currently cannot see Karine or their son… and, Karine’s whereabouts remain to be seen.

What will happen next remains to be seen, but it seems like Karine is done with Paul for good. We will be sure to keep you posted on this story as more developments occur.