A Century of Beauty: Anantara Chiang Mai’s Old British Consulate Welcomes Guests to Thailand for a Taste of History and Pampering

There are beautiful places in the world, but few can compare to the mystery and majesty of Thailand. A country 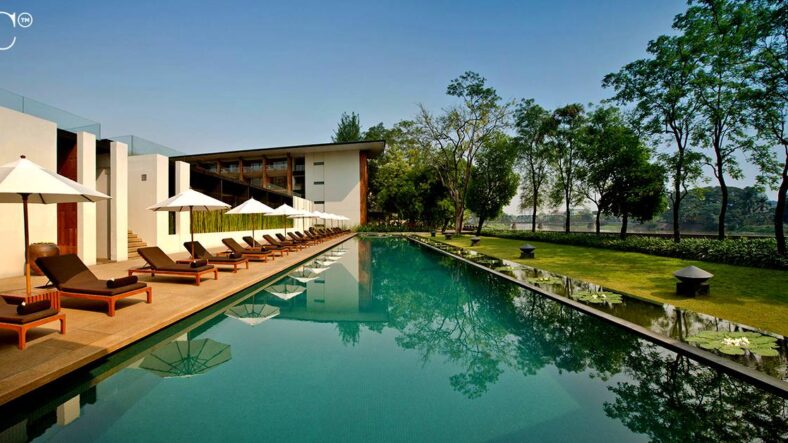 There are beautiful places in the world, but few can compare to the mystery and majesty of Thailand. A country of mountains, breathtaking water destinations, venerated forests and green, misty mornings – it's the perfect country to explore when your body and soul need healing.

The old British Consulate which sits in the center of Anantara Chiang Mai is celebrating a century of history, and now is the perfect time to visit and see what makes it such a special place.

These days, it's known as The Service 1921, a restaurant in the heart of Anantara Chiang Mai which is modeled after the British Secret Service of the early 1900's.

But once, this beautiful building served as the British Consulate, and the unique building carries a century of history with it.

Luxury Travel Magazine shares the building's singular history; "In its unofficial capacity as the gatekeeper to Chiang Mai’s past, the 100-year-old building buzzes with visitors from all over the world who come here to dine on fine Thai cuisine and have their fill of stories about the legendary parties for the British King’s or Queen’s birthdays, spirited croquet games played on the consulate’s lawn, and its resident elephants.

The King Ruler of Chiang Mai, Inthawichayanon, first granted the 1.12 hectares of land along the banks of the River Ping to the British government in 1884 and the construction of the British Consulate building in 1915 was one of the first tasks undertaken by the then-newly appointed Consul General in Chiang Mai, William Alfred Rae Wood. W.A.R. Wood was originally dispatched to northern Thailand to protect the interests of the British teak companies that set up shop in Chiang Mai in the late 19th and early 20th centuries.

The consulate included a residence for the consul’s family, a courtroom, offices, servants’ quarters, and stables for four elephants who, back in the day, were the preferred mode of transport to cut through the dense jungle. "

It was originally built to the standards of British foreign offices of the time, but with a unique quirk: it's 22 yards long, exactly the length of a cricket pitch.

And the builders made other nods to the unique needs of a building in Thailand; it sits atop a meter-high foundation, built to withstand flooding, and offers open-air verandas designed to catch the breeze and cool off visitors.

Built with a croquet lawn and with polo elephants in mind, it became a hub of sport and entertainment in its time before it closed during World War II for a period of four years. It was reopened after the war until 1978, when it closed for good and was sold by the British government.

The building was mostly forgotten until the 2000's, then it was renovated and restored to a state of beauty honoring the building's history, with its dark teak and rich Victorian paint scheme paying homage to its past. The space is referred to as "heavily masculine" and incorporates antique rugs, braille, morse code signage and fictitious secret service paraphernalia to lend to the air of mystery and intrigue.

To plan your visit to The Service 1921 and enjoy Northen Thai, Sichuanese and Vietnamese cuisine or teas on the verandas, visit the website.

Anantara Chiang Mai, the Perfect Place to Explore Thailand From

But the old consulate isn't the only thing worth checking out at Anantara Chiang Mai; the resort itself is beautiful, serene, and full of pampering options for the discerning traveler.

The property sits alongside the bangs of the Mae Ping River, and offers four types of rooms and suites to suit each guest's needs. Decor across the property embraces dark woods and walls of windows and glass doors that slide to let the fresh breeze flow through. Palettes of soft grays, browns and earth colors make it a soothing stay, and guests can relax poolside while the river whispers just beyond.

The Chiang Mai spa overlooks the river and invites guests in to enjoy traditional healing and wellness services that focus on creating harmony from the inside out.

And in the best British tradition, guests can expect a regular tea time – so you'll feel special and refreshed before setting out to explore the city.

For more information or to book your stay, visit the website.

Thailand isn't just for the average traveler – celebrities love the country as well. Here are some of the biggest names to call Thailand a place of refuge:

Other stars known to vacation in Thailand include Beyonce and Jay Z, David Beckham, Leonardo DiCaprio, Dan Bilzerian and more – so if you want to vacation like a star and want somewhere off the beaten path, Thailand may be right up your alley.