Art on theMART is one of Chicago’s great destinations. A massive projection screen for digital art installations, Art on theMART 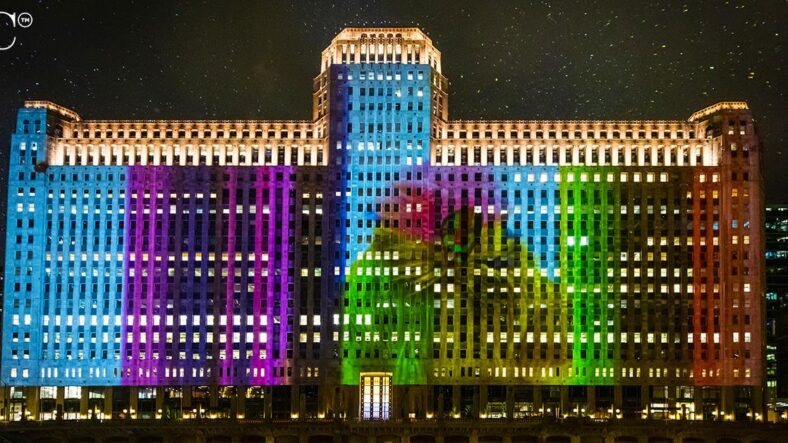 Art on theMART is one of Chicago’s great destinations. A massive projection screen for digital art installations, Art on theMART draws art lovers and dreamers alike. This Spring, a new installation will be debuting featuring the iconic Soundsuits of American artist Nick Cave. Known for his evocative and thought-inspiring pieces, Cave’s projection is an opportunity for the city and world to experience the beauty, deep meaning, and wonder of the Soundsuits installation. Cave’s Art on theMART projection coincides with an exhibit of another artwork at the Museum of Contemporary Art, known as “Forothermore.” 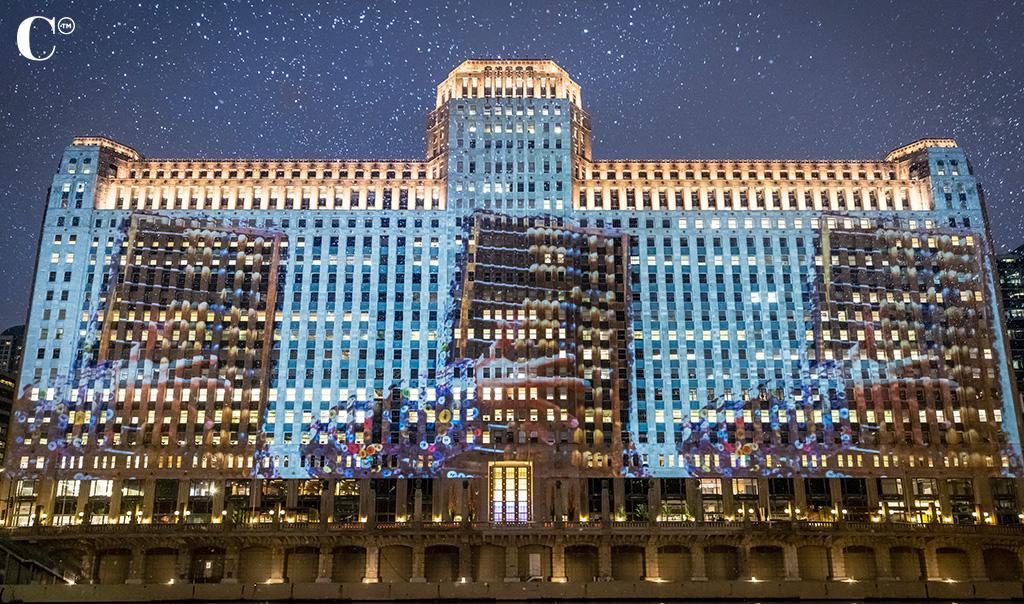 Back in 1991, the brutal beating by police of a Black man named Rodney King ignited a firestorm. In the wake of video released of the beating, public furor arose over racism, abuse of power, and other issues we still grapple with to this day. But it wasn’t until 1992 when the powder keg exploded. The four offices who beat King were acquitted, and the city of Los Angeles erupted in riots. Ultimately, two of the officers were later indicted on charged with violating the Civil Rights of King, while the other two were found Not Guilty.

But the damage the case had done to the trust between people and police was extreme. As this was ongoing, artist Cave was doing what artists do – looking for a way to reach people through their work. Cave came up with the idea of his now-iconic Soundsuits; sculptural body suits made from synthetic hair and raffia. The Soundsuits were designed to mask the wearer’s body, transcending boundaries artificially created by race, class and gender. When viewing the Soundsuits, viewers are forced to challenge and look beyond their preconceived notions and internal biases.

With Art on theMART, the Soundsuits are coming to larger-than-life as they span the massive projection installation. The installation will combine dance, performance, film and public art to encourage those viewing to think, consider, and grow.

In a statement, the Art on theMART team shares, “… Brightly colored figures will dance across theMART’s iconic riverside façade, transporting the viewer to a kaleidoscopic otherworld on the river’s edge. Amidst the flurry of movement, a figure adorned with a stop-sign emerges, reminding viewers of the underlying sense of urgency despite the jubilant expression of freedom. In Drive-By Remix, Cave’s original film Drive-By (2011) is adapted to take full advantage of its new venue. Originally displayed in the windows of a Chicago corner storefront, Drive-by Remix is re-formatted and updated with amplified colors to make use of the unique location and theMART’s status as an iconic Chicago landmark.

Contextualizing his new video projections, Cave states, ‘Chicago is a living representation of America as a melting pot. My hope is that by turning our collective gaze up to theMART’s monumental facade and taking in the Soundsuits in all their limitless exuberance, we can let some of that positivity seep into our own skins.’”

Soundsuits debuts at theMART May 5 and will run through September 7.

Forothermore at the MCA 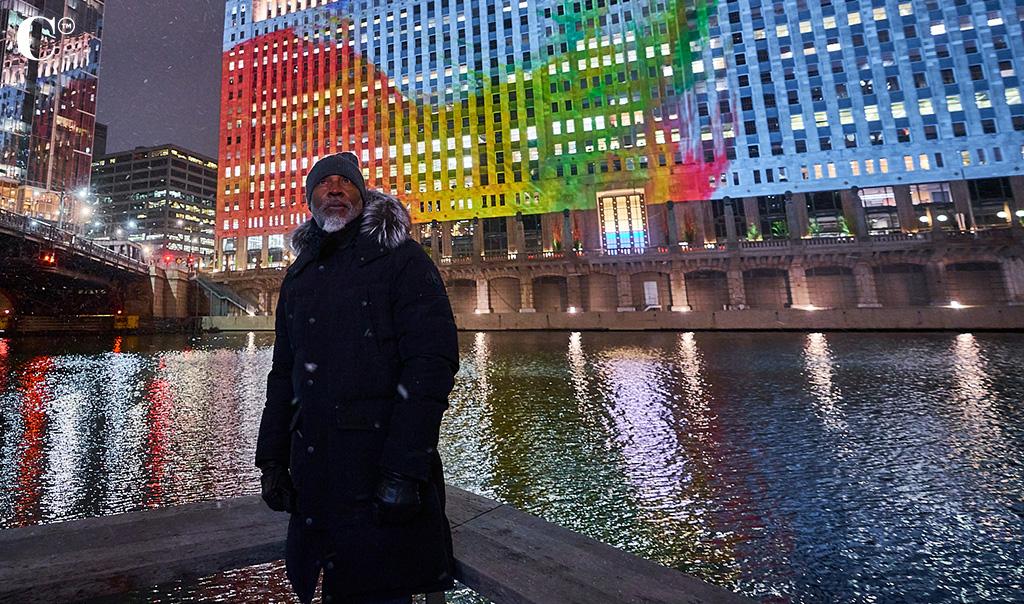 The debut of the Soundsuits installation in theMART is coinciding with a career-spanning retrospective exhibit at the Museum of Contemporary Art. Cave’s “Forothermore” will be on display at MCA from May 14 through October 22. The exhibit includes new, never-before-seen works of art that include a continuation of the Soundsuits series, a captivating installation designed specifically for MCA titled “Spinner Forest” made up of thousands of kinetic spinners hung suspended in the museum’s two-story atrium and fourth-floor lobby.

The museum website explain, “Cave came to prominence as a visual artist almost twenty years ago with his dazzling, sculptural Soundsuits, and works in Chicago as an activist, educator, designer, and performer. Nick Cave: Forothermore gathers all of these aspects of Cave’s work into the artist’s largest museum survey to date. This immersive journey through Cave’s distinct bodies of work is accompanied by an exhibition catalogue designed with Cave’s partner, Bob Faust.

Nick Cave: ‘Forothermore is an ode to those who, whether due to racism, homophobia, or other forms of bigotry, live their lives as the ‘other’—and a celebration of the way art, music, fashion, and performance can help us envision a more just future.’” 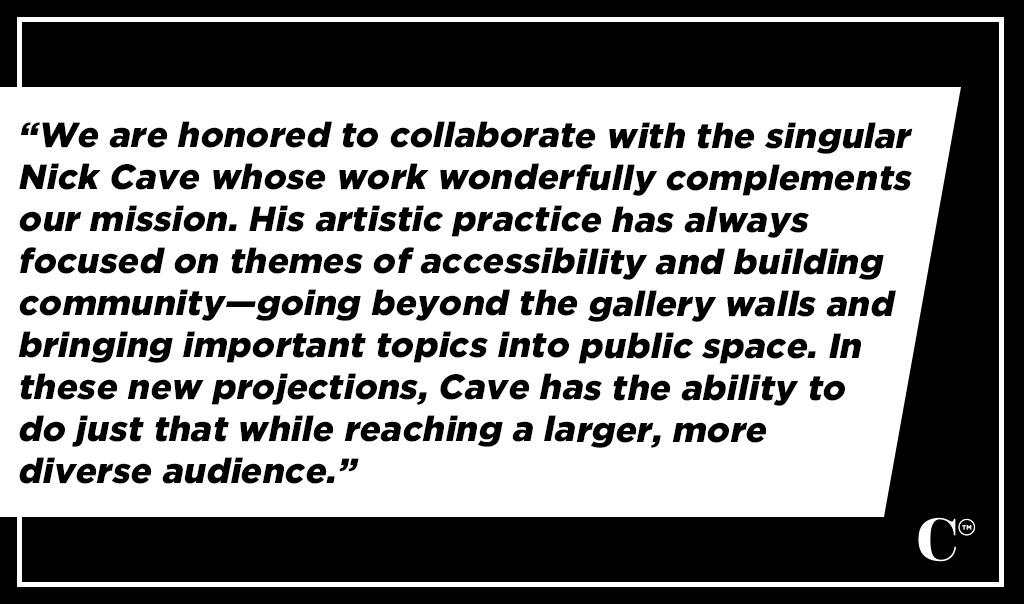 Art on theMART is known as one of Chicago’s great art destinations. Art on theMART is the largest permanent digital art projection in the world, spanning a whopping 2.5-acre river facade of theMART. Installations on theMART rotate seasonally, and are visible to the public from Wacker Drive down along the Chicago Riverwalk.

TheMART is the largest privately-owned commercial building in the United States, covering 4.2 million gross square feet, two city blocks, and rises 25 feet in the air – the perfect canvas backdrop for the art installations.

In a statement, Art on theMART director Cynthia Noble shares, “We are honored to collaborate with the singular Nick Cave whose work wonderfully complements our mission. His artistic practice has always focused on themes of accessibility and building community—going beyond the gallery walls and bringing important topics into public space. In these new projections, Cave has the ability to do just that while reaching a larger, more diverse audience.”

For more information or to plan your viewing, visit the website.