There's nothing quite like the experience of bringing your first baby home. Everyone has an idea in their head of 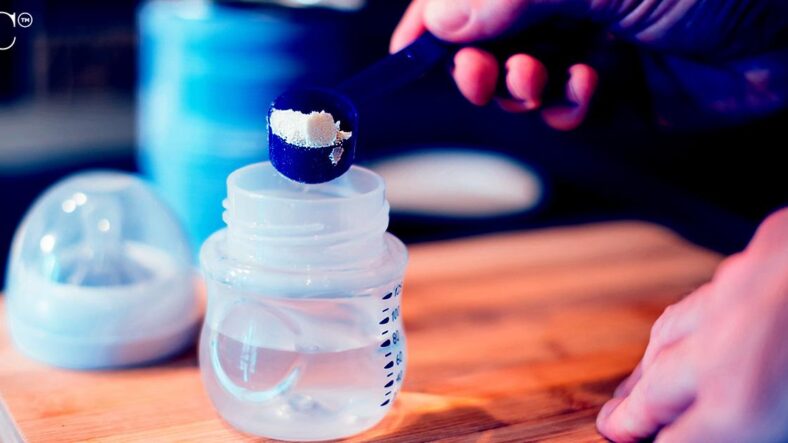 There's nothing quite like the experience of bringing your first baby home. Everyone has an idea in their head of what that experience is going to be like, but reality rarely cooperates. Maybe you thought your baby would sleep through the night, but your new bundle of joy avoids sleep like the plague. Maybe you thought breastfeeding would be a breeze, but you end up needing to turn to formula for sanity's sake.

Whatever the unexpected occurrence is, modern parenting products have provided endless solutions to make things easier, if not always solved. There are dozens of sleep solutions and aids on the market, toys, gear and products for every parenting conundrum. But one very basic product that decades of parents have taken for granted was suddenly incredibly hard to find, and unfortunately it was the most fundamental and vital: baby formula.

For months, the baby formula supply has dwindled to a trickle, leaving desperate parents of infants and older children with special needs scrambling. Networks have been set up across the country to try to coordinate between those who need formula and those who find it on the shelf. Some have turned to stockpiling and have been blasted for taking product away from others; some stores have limited the amount of formula any one person can purchase at one time; and some have turned to desperate measures to keep their babies fed, diluting formula or creating their own homemade products.

The system was slow to react to the shortage, leaving parents frustrated, scared, and furious, but there may be an end in sight. According to the FDA commissioner, we now know when the shortage should ease – but is it soon enough?

An End in Sight

According to Califf, parents can expect the shortages to end in late July, with a slow wind-down leading up to that point. Cliff explains, "“It’s going to be gradual improvement up to probably somewhere around two months until the shelves are replete again," per CNBC.

CNBC adds, "Abbott plans to resume production at its plant in Sturgis, Michigan, on June 4, and it will start shipping out its specialty formula EleCare on June 20. The company has previously said it would take six to eight weeks for its formula to arrive in stores once production restarts.

The FDA has eased import restrictions to allow foreign manufacturers to send formula to the U.S., and the Defense Department is airlifting in the equivalent of 1.5 million bottles of formula from Europe."

The Sturgis factory was closed earlier this year after bacteria contamination killed several infants, but the location was responsible for 40% of the Abbott US inventory of baby formula, and Abbott itself provides 40% of the US supply. Add that fact to the supply shortages caused by the pandemic, and what you end up with is bare baby formula shelves and desperate parents.

While parents are relieved to know that the shortage is coming to an end, 2 months is a long time to go with hungry babies.

The Impacts and Failure of the Shortages

The formula shortage has exposed anew the inequities between families with means and those without. People with money and resources have been able to travel far distances and work with expensive shipping options to keep their babies supplied with formula.

Those with fewer resources, no personal transportation or who rely on WIC – often the lowest income families – are the ones who haven't been able to access the life-saving resources of their wealthier peers.

While these realities are nothing new, the formula shortage threw them into stark contrast as desperate low-income families began diluting formula or making their own to keep their babies' bellies full, even as experts chided them for the unsafe practices.

For many babies with food sensitivities or allergies, the shortage has also been a nightmare. Parents online have shared stories of having to wean their allergic babies onto formula that causes them pain or covers them in rashes, but when the alternative is letting them starve – you do what you have to do.

Multiple babies have been hospitalized since the start of the shortage, either due to being unable to find specialized formula or electrolyte imbalances from diluting.

It's a heartbreaking reality for far too many across the country. Although it's a relief to hear that there's just two months to go before the supply should be back to normal, 2 months is an eternity when you have a hungry baby in your arms.