Bansky‘s artwork has a knack for appearing when society needs it most. From visual commentaries on the climate crisis to 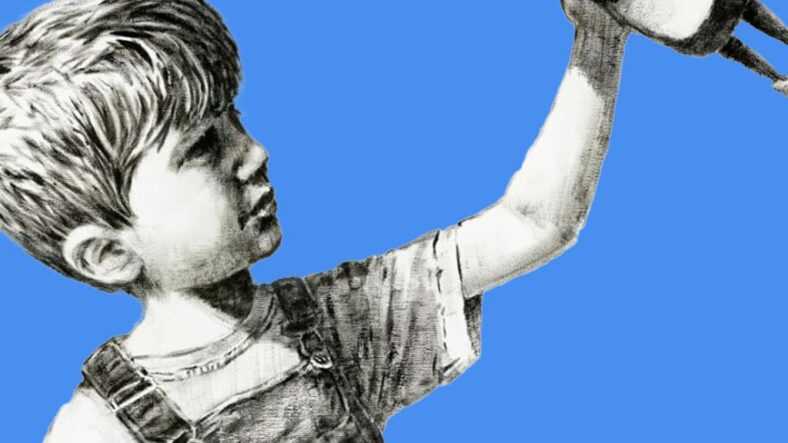 Bansky‘s artwork has a knack for appearing when society needs it most. From visual commentaries on the climate crisis to the way humans treat one another, the mysterious street artist frequently has his finger on the pulse of what society needs to be reminded of most. One of his recent pieces, titled “Game Changer,” has reminded society that the nurses and doctors of the front line of the COVID-19 pandemic are the superheroes we’ve always been searching for. And now, that piece has been sold for a staggering amount, with the proceeds directly benefitting an NHS charity. 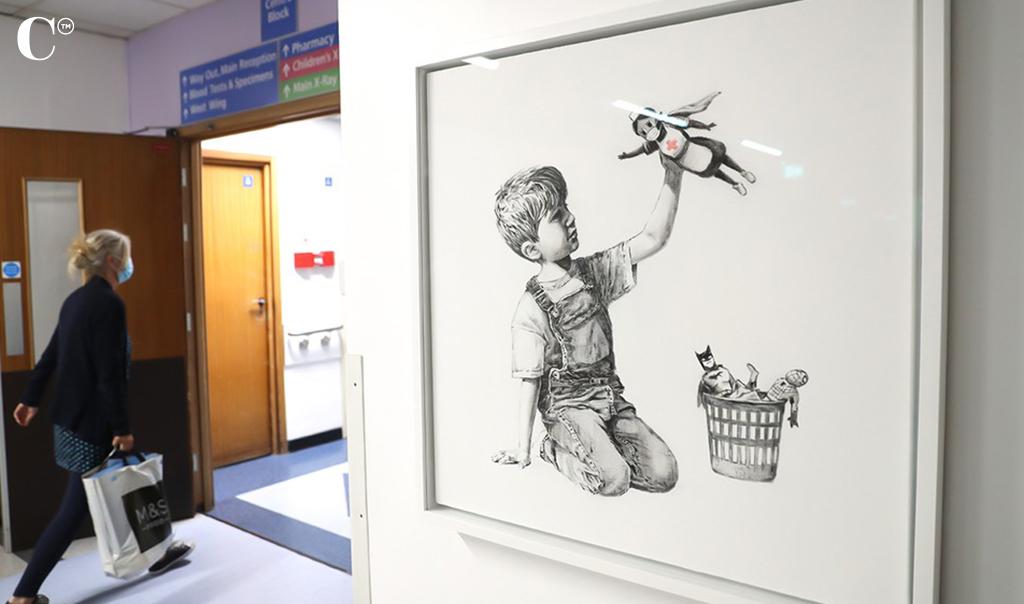 The street artist’s piece appeared in the foyer of the Southampton General Hospital. Delivered in May of 2020, the piece included a note from the enigmatic artist that read, “Thanks for all you’re doing. I hope this brightens the place up a bit, even if its only black and white.”

“Game Changer” is a stark black-and-white piece that shows a child sitting next to a bucket of superheroes including Batman and Spiderman. But in lieu of the more commercial superheroes, the child holds his favorite aloft; a nurse, wearing a mask. With a determined expression and a flowing cape, the nurse superhero figure is clearly representative of the healthcare workers who have helped us survive the past year’s nightmare.

Per CNN, “At the time, UHS chief executive Paula Head called it ‘an inspirational backdrop to pause and reflect in these unprecedented times,’ in a tweet.”

The stunning piece of artwork was auctioned off at Christie’s in London, and sold to the tune of £16.7 – £14.4 before the buyer’s fee ($23.2 million). The proceeds from the sale will benefit the system Banksy was looking to uplift. DW reports, “Christie’s says the Southhampton Hospitals Charity will use proceeds from the sale to ‘fund well-being projects for staff and patients,’ and to ‘distribute to a wider community of healthcare providers both within the NHS and charitable sectors.’

‘This incredible gift will be invaluable in helping us to focus on promoting and protecting the welfare of our staff as they heal and recover from the last year,’ said David French, interim chief executive officer at University Hospital Southampton.”

Now that the original has been removed, a reproduction will replace it near the Southampton General ER – where it’s been boosting morale for almost a year.

Other Banksy Pieces Remonstrate or Inspire 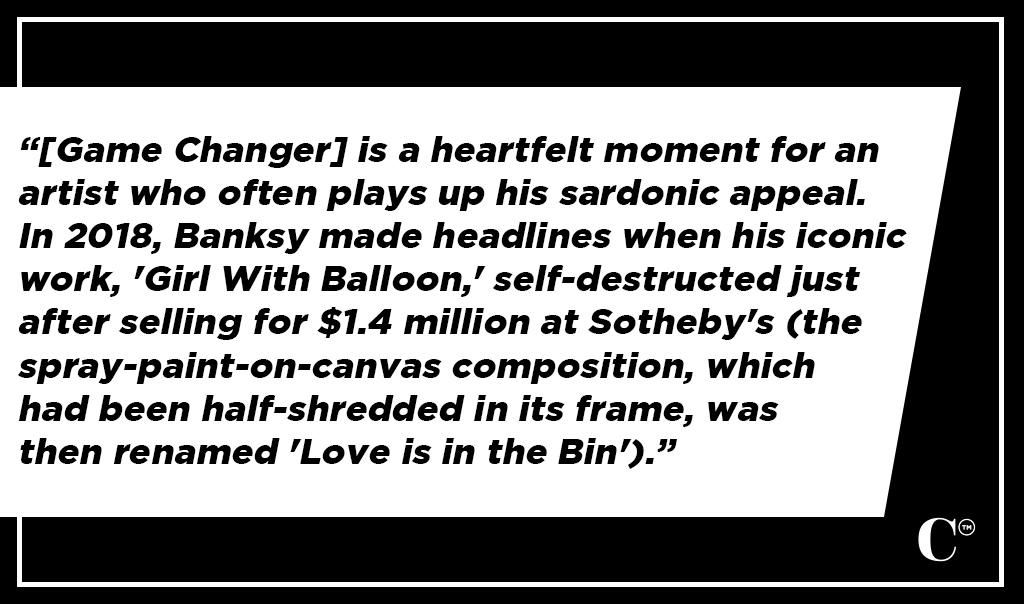 “Game Changer” is an unusually solemn ode for an artist who often uses whimsical satire to remind society of its duty and its failings. Some of Banksy’s artwork chastises society’s obsession with material objects, and other pieces chastise us for how we treat each other. CNN reports, “[Game Changer] is a heartfelt moment for an artist who often plays up his sardonic appeal. In 2018, Banksy made headlines when his iconic work, ‘Girl With Balloon,’ self-destructed just after selling for $1.4 million at Sotheby’s (the spray-paint-on-canvas composition, which had been half-shredded in its frame, was then renamed ‘Love is in the Bin’).

‘Game Changer’ was not Banksy’s only pandemic work. Three months after the donation, Banksy left stenciled rats with face masks around the London Underground — which were promptly removed for violating Transport for London’s ‘strict anti-graffiti policy.’ Then, in December, he left a mural of a woman violently sneezing on the side of a home in Totterdown. Though Banksy has yet to reveal his identity, many of his early works in and around Bristol, including the playful work ‘Aachoo!!,’ have led to speculation that he is from the area.”

Game Changer will Change the Game for Many Patients 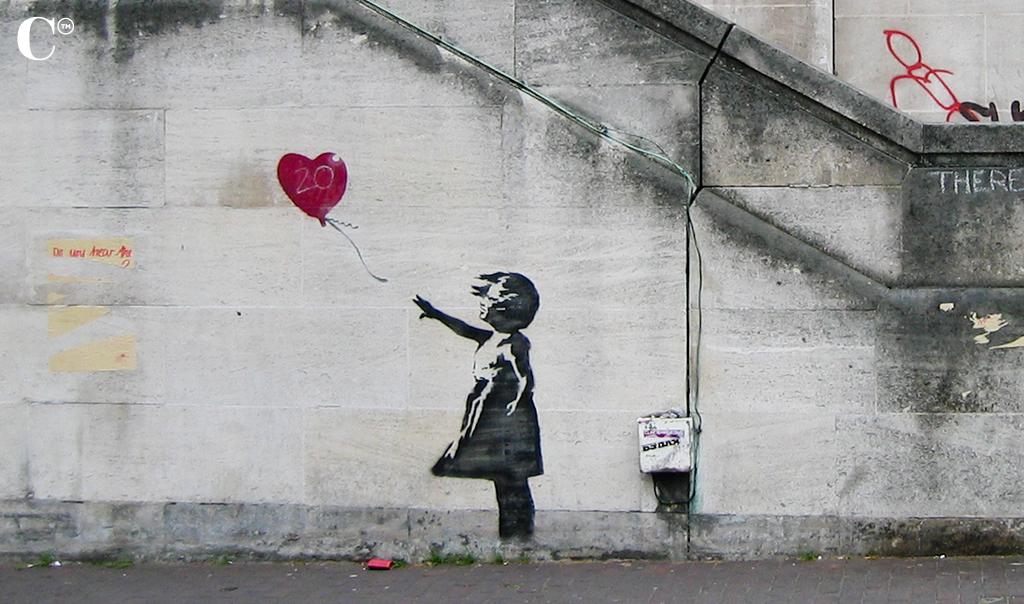 The cash injection from “Game Changer” will help a desperately overloaded NHS. Britain’s heath system has been overtaxed by the pandemic like so many health systems around the world – but the NHS in particular has been underfunded for decades. DW shares, “The NHS in particular is a chronically underfunded behemoth that can never keep up with the demands put on it by an aging population despite annual budget increases.

That strain means that early screening for illness might not be done and waiting times at hospitals and physicians’ offices are exacerbated by shortages of healthcare workers that have in turn been further negatively impacted by Brexit.

A 2018 Organization for Economic Cooperation and Development (OECD) study comparing 21 countries found that the UK had among the lowest per capita number of doctors, nurses and hospital beds in the Western world, with only Poland having fewer doctors and nurses, and only three —Canada, Denmark and Sweden — having fewer beds.”

While a one-time boost won’t change the system forever, it’s a breath of fresh air after a year of treating pandemic patients with the already overburdened system. Once again, Banksy’s art is providing more than a pleasing sight – it’s helping people. And the image of a hero nurse being held aloft is a good reminder of who we should be focused on appreciating for surviving the dark year of 2020. While politicians kept economies on track and entertainers kept us sane – nurses and doctors literally kept us alive, and Banksy wants everyone to remember.