Beirut Explosion Update: What We Know Now, And What We Don’t

On Tuesday, a massive explosion rocked the capital city of Lebanon, Beirut. The small country is located in the middle 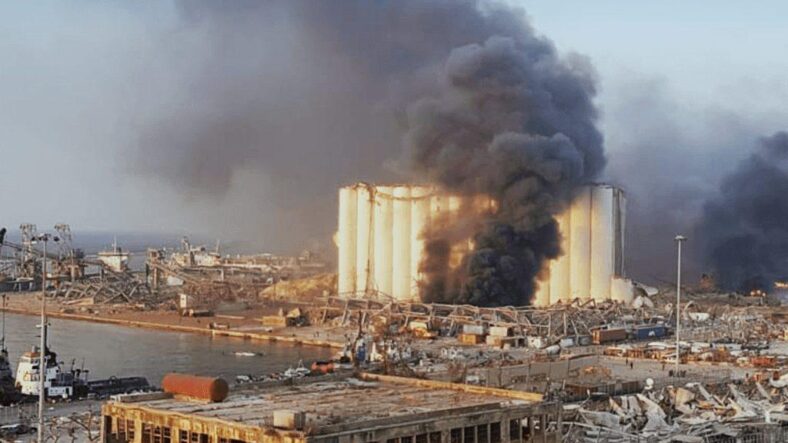 On Tuesday, a massive explosion rocked the capital city of Lebanon, Beirut. The small country is located in the middle of several volatile regions in the Middle East, and no stranger to unrest and violence. Even so, the blast that rocked the city this week stands out as exceptionally brutal and deadly. Often caught in the crossfire of political causes, Beirut is currently roiling with anger at the city’s elite, whose negligence is being blamed for the disaster that killed over 100 people and injured thousands.

What Caused The Beirut Explosion?

AP News reports that 2,750 tons of ammonium nitrate, a volatile and explosive chemical used to produce fertilizer, was stored at the facility for over 6 years. Ammonium nitrate increases in potency over time, and 6 years of improper ventilation would have created a literal powder keg. The facility where the explosion occurred resides in the Port district, historically a corrupt and unstable area, fought over by factions and politicians who hold power in the region, including militant organization, Hezbollah.

What We Don’t Know

Hezbollah’s involvement in the explosion remains conjecture, but Bloomberg tells us that they will not escape blame for the blast. However, despite what US President Donald J Trump would tell us as he called the explosion, “a terrible attack,” the parties to blame are difficult to nail down. Was it an attack? Negligence born of a dysfunctional government? Intentional negligence, facilitating terrorist activities? In order to determine this, one needs to explore the possibilities.

As Hezbollah is often at the root of violence in the region, it is natural that many looks to them to cast blame. According to the Council on Foreign Relations, Hezbollah is a Shiite Muslim political party and militant organization, mostly operating in Lebanon and neighboring Syria. They receive backing from Iran and use their resources in an anti-Israel campaign with the goal of casting out western influence in the middle east. The United States designates Hezbollah as a terrorist organization, and they have been involved in the civil war in Syria, supporting Bashar al-Assad’s regime. They have great influence over, and some call it a significant hold on, the Prime Minister of Lebanon, Hassan Diab.

But in an area often caught up in political and ideological strife, being a terrorist organization in the region doesn’t automatically make them responsible for the explosion. Historically, Hezbollah has controlled the Port district in Beirut for some time, and public conjecture suggests that the group was storing the explosive materials for use in Syria. 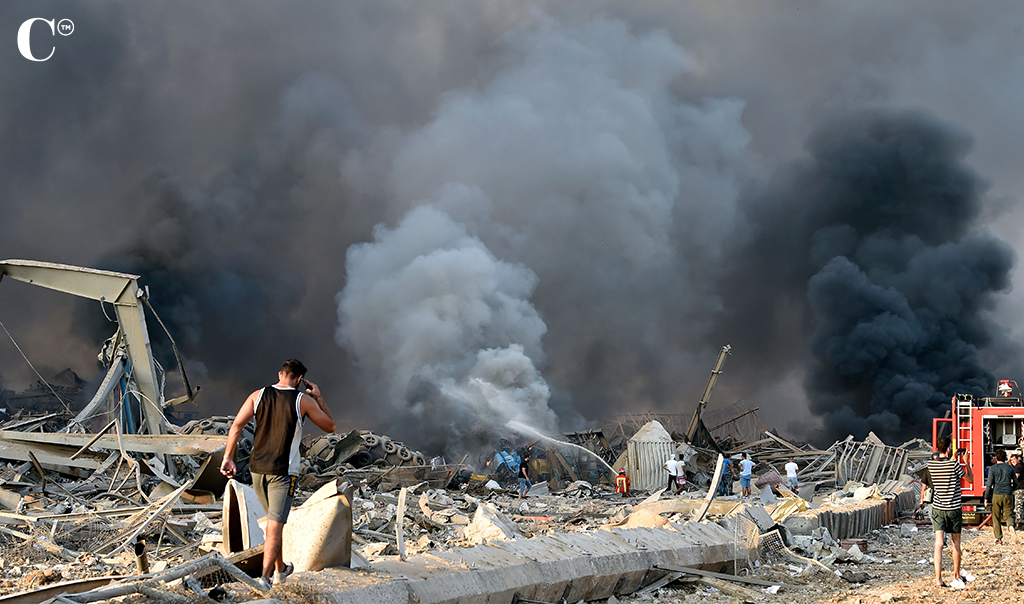 Warnings were issued repeatedly about the stored materials over the years, according to AP News. They report that, “an official letter circulating online showed the head of the customs department had warned repeatedly over the years that the huge stockpile of ammonium nitrate stored in the port was a danger and had asked judicial officials for a ruling on a way to remove it.” The fact that the government is in the hands of Hezbollah, a group which would greatly benefit from access to a stockpile of explosive materials and conveniently ignored the repeated warnings, suggests that there may have been some intentional negligence involved.

But how did the material get there in the first place?

According to Bloomberg, the ammonium nitrate was sized in 2013 from a ship traveling from Georgia to Mozambique, under a Moldovan flag. Normally, seized cargo such as this would be returned, auctioned, or disposed of, but an unnamed source brought the shipment into Beirut. Who that source is, and what their intentions were, is a great driver of the mystery surrounding the cause of the explosion.

It is also possible that the cause is simply tragic negligence caused by a dysfunctional government. For the past few months especially, economic meltdown, a breakdown of public services, and an uptick in the cases of COVID-19 in Lebanon have led to exceptional instability in a country already beset with woe. Therefore, it is not unimaginable that the storage status of some fertilizer material in a port facility might fall by the wayside. Local officials suggest a welding spark from nearby ignited the aged and extra-volatile material.

What We Do Know About The Explosion 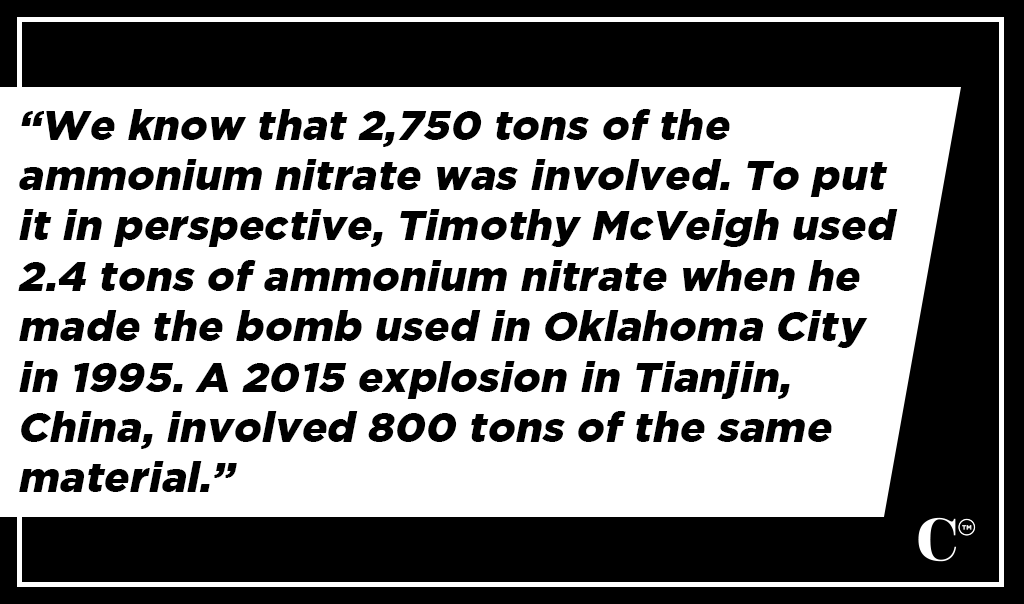 Despite the uncertainty surrounding the who and why of the explosion, what is concrete is some of the numbers surrounding the blast. We know that 2,750 tons of the ammonium nitrate was involved. To put it in perspective, Timothy McVeigh used 2.4 tons of ammonium nitrate when he made the bomb used in Oklahoma City in 1995. A 2015 explosion in Tianjin, China, involved 800 tons of the same material. Bloomberg equates this explosion to 1,100 times the Oklahoma City bombs, and this level of explosion could certainly account for all of the damage caused, and does provide the proper chemical profile for the red mushroom cloud that loomed over the city in the moments after the material ignited.

CNN gives us numbers of the aftermath. As of Thursday, 137 have been reported dead, more than 5,000 wounded, and 300,000 people have been displaced from their homes and businesses as a result of the explosion. Hundreds are still missing, and the Lebanese health minister says that they expect the death toll to rise as they continue to search. Entire city blocks were leveled, and AP News reports that Beirut Governor Marwan Abboud has claimed between $10 billion and $15 billion worth of damages have been done.

But while the aftermath provides a clear picture of how many have suffered and the breadth of the blast, it hasn’t yet cleared up the how and why. AP News spoke with a senior U.S. Defense Department official and a member of the U.S. intelligence community who said, “there were no indications the explosion was the result of an attack by either a nation state or proxy forces… … at the moment [the spoke to the Associated Press], the explosion seems to have been caused by improper storage of explosives.” 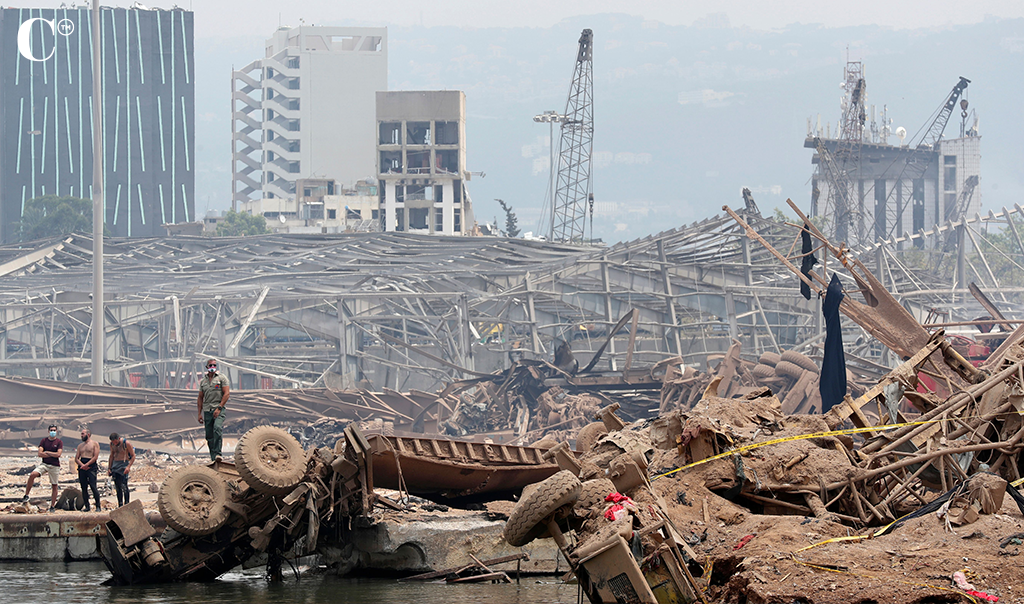 Prime Minister Hassan Diab, eager to redirect blame away from his administration as people rumble over his connections to Hezbollah and their potential motives to further destabilize the region, described the blast as, “a major national disaster,” and pledged punishment for those responsible for what he considers negligence. But he faces an urgent public relations crisis, as the day before the blast, the foreign minister, Nassaf Hitti, resigned, “accusing colleagues of lacking any intention to institute meaningful reforms and warning that conflicting interests threatened to turn the country into a, ‘failed state.’”

Whether it was a tragic coincidence that those words occurred the day before such a horrifying disaster, or a good read of the situation and warning of things to come, it is clear that the Lebanese government and leadership in Beirut are not well trusted by their people. Their connection with Hezbollah and failure to contain the economic disaster, as well as effectively address the surge of the COVID-19 pandemic, has led to a simmering anger among the people and the assertion that whether by intent or by negligence, the explosion should have been preventable.

As of now, France, the United Arab Emirates, and Germany are offering various types of aids to help search for the missing and treat those who have been injured in the explosion. But all the doctors and medical aid in the world won’t restore public confidence, or help the government piece back together a country teetering on the brink of unrest. It will take a herculean effort to help the citizens of Beirut return to a feeling of normalcy and safety, and the economic uncertainty they currently face will only deepen the struggle.