It’s safe to say that this season of Bravo’s Below Deck Mediterranean has been among the most dramatic ever and the shocking drug use accusations by Bosun Malia White against Chief Stew Hannah Ferrier have only added to the drama.

Now, in the midst of those drug accusations- which MANY fans took issues with- Malia, who reported Hannah’s drug use, has been accused of using drugs herself.

In addition to the latest shocking scenes, there has also been a ton of controversy surrounding the show, including a racist scandal, a firing of a chef that many took issue with.  This is a lot to break down, so let’s review…

Peter Hunziker is one of the deckhands on this season of Below Deck: Mediterranean. While fans were raising their eyebrows at Hunziker’s comments towards his boss Malia White– calling her “hun,” for example- it was a post Hunziker made to his Instagram story that got him in big trouble.

According to The Daily Mail, Hunziker had put up “a reposted meme that depicted shocking racist and degrading sexual imagery that showed a naked Black woman in shackles.”

After Bravo was made aware of the post, a spokesperson for the network confirmed to The Daily Mail that Hunziker had “been terminated for his racist post.”

They also added that “Bravo and 51 Minds [the production team behind Below Deck Mediterranean] are editing the show to minimize his appearance for subsequent episodes.” 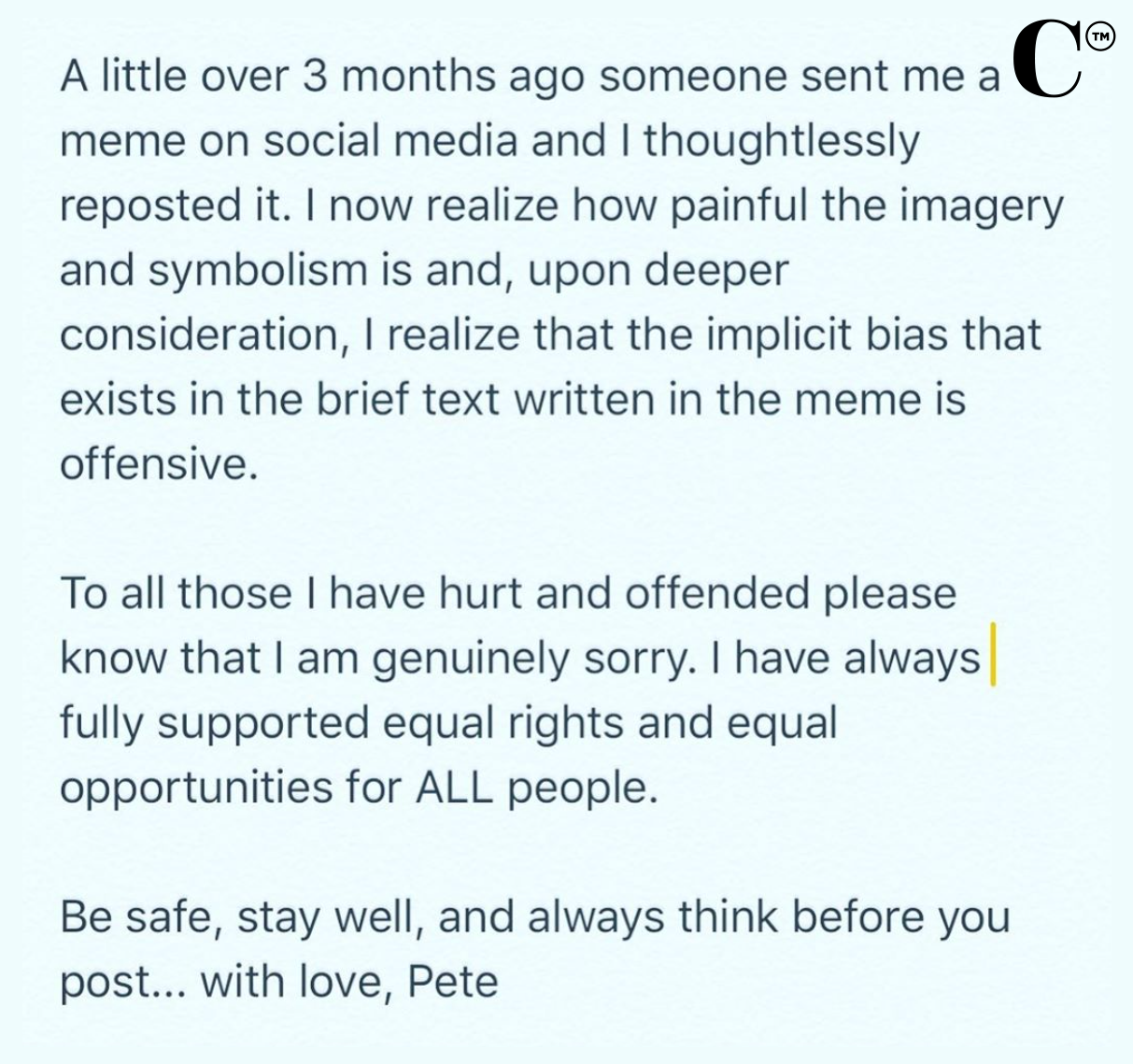 Towards the end of last month, Hunziker took to his Instagram to post an apology, as seen above.

“A little over 3 months ago someone sent me a meme on social media and I thoughtlessly reposted it,” Hunziker began with sharing. “I now realize how painful the imagery and symbolism is and, upon deeper consideration I realize that the implicit bias that exists in the brief text written in the meme is offensive.”

“To all those I have hurt and offended please know that I am genuinely sorry,” Hunziker continued stating. “I have always fully supported equal rights and equal opportunities for ALL people.”

Hunziker wrapped with saying “Be safe, stay well, and always think before you post… with love, Pete.”

The chef when this season of Below Deck Mediterranean began was Hindrigo “Kiko” Lorran. Fans immediately fell in love with Lorran, as he had a sweet disposition and a big enthusiasm. As the season progressed, though, some of the guests were not overly thrilled with his food, and boss Captain Sandy Yawn began to take issue with it. After giving Lorran an ultimatum to improve or risk losing his job, Yawn ended up letting him go.

The episode on which this happened was quite emotional to watch, as Lorran was seen sobbing in his bed and did not even want to get out of bed to cook the guests breakfast, but Yawn insisted he does so. In addition, his close friend (and chief stew Hannah Ferrier) was so upset by Lorran leaving (and the way that he was treated) that she had a panic attack.

After last week’s episode where Lorran officially left, he took to Instagram to share the following statement:

“I just wanna say thank you so much for all the support and I love what you guys are sending to me. I can really feel this amazing energy! Also I hope I could represent my country, all the latinos and hard workers around the globe, life is not always easy for us. So when we have an opportunity we take no matter what .

“Thank you so much @bravotv and @51minds for this opportunity and experience in the show I could see what I am really good in and be more confident and also I could see where I need to improve to be a better chef and also a better person.”

And for my Fans, dont blame the other crew members for me leaving the show. A chef is responsible to make his own decision, I was so tired and I did a couple of right and a couple of wrong things, the pressure and the cameras made me loose my mind. In normal circumstances that probably would not happen but it did.

So I have to say that was on me.

I hope I can still make you guys smile here and also inspired you guys with my food, personality, and adventures , it’s been amazing time and I feel so blessed in this world and I’m so So So happy with you all. I can’t believe that I have so many great fans thats is amazing.

Spread the love guys not hate that’s the message I wish to send to you all!

We are humans let’s try to be Angels.(so cheesy )

God, Jah, buda, Allah whatever you believe bless you all!

As if this wasn’t enough drama this season, on this past Monday’s episode things took an even darker turn. As we previously mentioned, Ferrier had a panic attack (which her roommate, Malia White – who is the Bosun on the ship- sees happening) after seeing the way Lorran was treated and finding out he was leaving.

Then, on this week’s episode, White’s boyfriend Tom Checketts came to visit her on the boat. It turns out Checketts is a chef, and Yawn asked him if he would work on their ship to replace Lorran and Checketts agreed to take the job.

While room assignments had already been made, as the ship had already been through quite a few charters, White immediately wanted the rooms to be changed so that she could share a room with Checketts. While White wanted Ferrier to room with Bugsy Drake (who came back to the show after a few episodes this season when the second stew Lara Flumiani ended up quitting), Ferrier and Drake had issues in the past. While Ferrier and Drake have mostly gotten along this season, they both agreed that rooming together would not be ideal.

Rather than just accept things as they were, White went to Yawn to complain about this and, even though Ferrier has claimed rooming assignments is her job, Yawn decided the rooms would be allowed to be changed, claiming the chef ranked above everyone. Due to this, Ferrier ended up having to change rooms from rooming with White to rooming with Drake, so that White and Checketts could be in a room together.

As if this wasn’t enough drama for one episode, at the end of the episode we see that White turned a photo of Ferrier’s “personal belongings” over to White. The photo included a box of Valium and a pen (that could be used for CBD). Yawn claimed “someone has drugs on board,” and decides to address this with Ferrier.

While White told Andy Cohen on Watch What Happens Live that she reported Ferrier “because it was my duty to,” noting that “I don’t want to lose my licensing,” many fans took issue with what went down. Specifically, the fact that Ferrier was being accused of being on “drugs” when she was taking a prescription for anti-anxiety medication and had a CBD pen- which is legal where she was- was beyond ridiculous. It seemed to send the message that having to take medicine for anxiety was equivalent to having a drug problem. 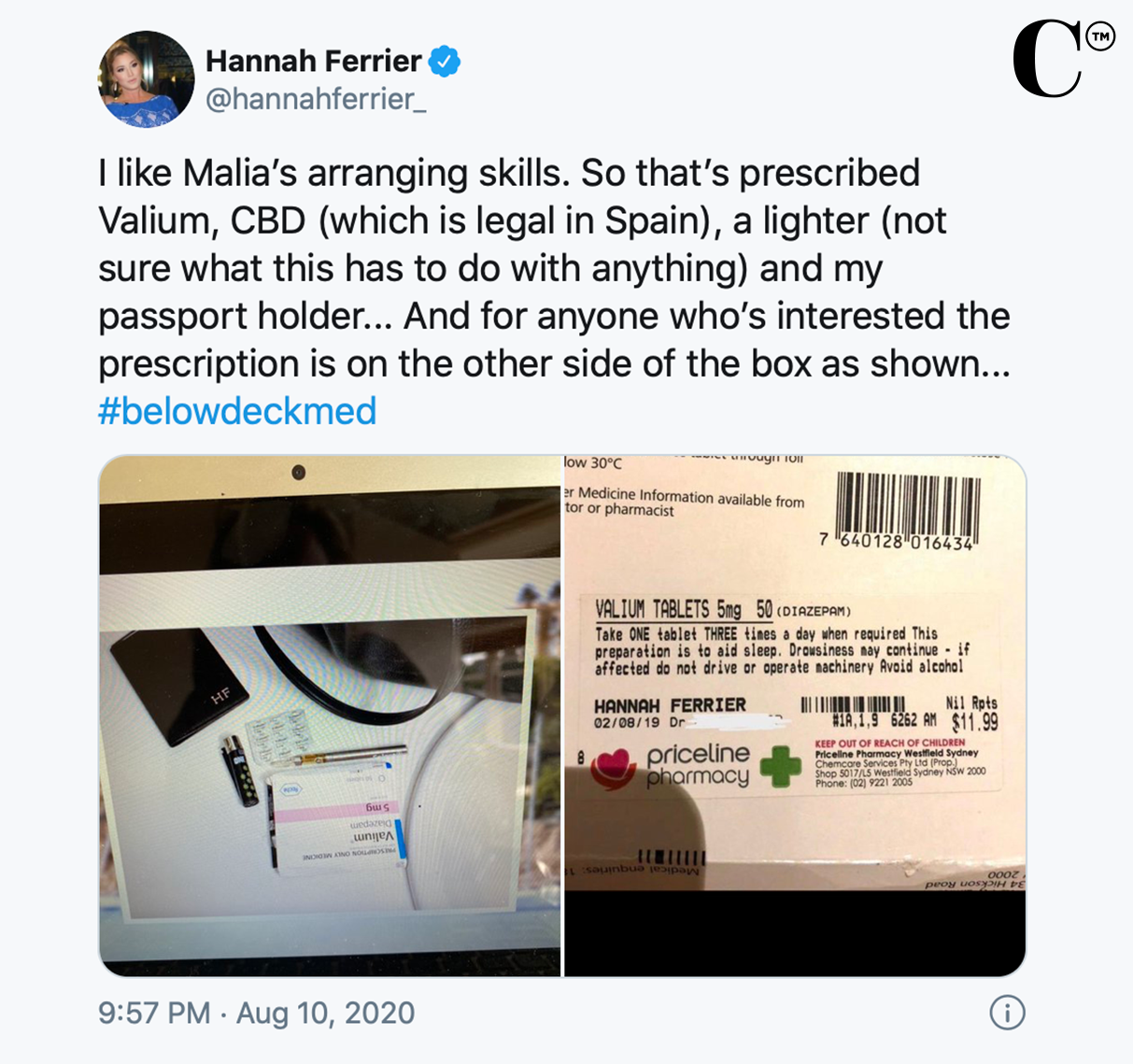 As you can see, Ferrier not only re-shared the photo that White took and sent to Yawn, but also proved that her valium was indeed prescribed by a doctor.

In an Instagram post she ended up deleting, White tried to further defend why she did what she did, stating the following:

“If any crew member suffers from a mental health condition that they require medication for they must disclose that to the Captain BEFORE signing onto the boat. They then under the supervision of Captain or Officer can be given medication as needed and evaluated to see if they can still stand duty.

While at sea the Captain is the medical person in charge- any and all medical decisions MUST go through them. Taking any sedative while on duty is completely illegal and could cost myself, the officers and Captain Sandy all of our licensing.

Not to mention possible jail time and fines if an incident occurred & a crew member was found to have been on something without authorization,” she wrote. “Reporting any incident especially one we witness is all of our job. Yachting is my career- I’m not here to worry about plot twists & TV drama- I’m here to do my job and learn how to become a Captain. Maritime laws are in place for a reason.”

Ferrier took to Instagram live to state that “I was really disappointed because I felt like Malia and I got along quite well all season,” Ferrier said. Adding, “I feel like we were respectful to each other. I really didn’t realize that Malia and I were in such a bad place that she would do that. It’s just very snakey, very underhanded.”

While some think White’s reasoning for turning the photo over to Yawn had to do with the drama surrounding the room arrangements- something White has denied- the plot thickened last night when Hunziker took to his Instagram story to accuse White of using drugs herself- and, these drugs are not the type that are prescribed.

In a now-deleted Instagram story post, Hunziker wrote “I feel for @hannahferrier234. I battle anxiety daily for personal reasons between me and my doctor, I’m prescribed similar medicine and had it with me on board the whole time.”

“I didn’t get fired,” Hunziker continued. “I had panic attacks, I took my medicine, I was fine.”

Hunziker then went in on white, specifically stating “What a rat, let’s air sweetheart Malia’s DRUG history out there Miss I’m so worried about my ticket but I’ll sniff an 8 ball not eh weekend.”

For reference, an 8 ball is a slang term, typically referring to an eighth of an ounce of cocaine.

While Hunziker did remove the post, this is a major allegation in White’s direction, especially since White was involved in accusing Ferrier of “having drugs onboard,” making this a major part of the storyline that likely will lead to Ferrier being let go from the cast.

Where Do Things Go From Here For Below Deck?

While we are anxiously awaiting next week’s episode to see the drama continue to unfold, it seems there is a lot of drama that is occurring off-camera between the cast as well now. To quote Cohen’s most famous moniker, we’re just going to have to sit back and “watch what happens” – but something tells us the explosive fighting and information outing is far from over.