Is Bill Belichick of the New England Patriots Singing the Blues with 2-4 Start?

NFL fans are dying to know what is it about Bill Belichick that makes Patriot fans so drawn to him? The 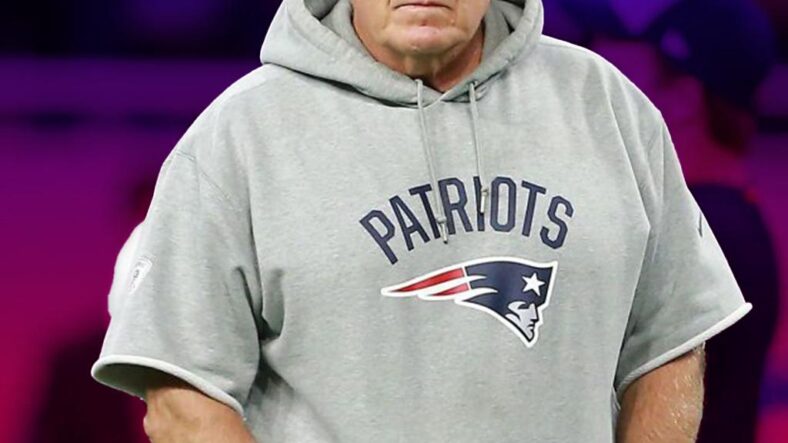 NFL fans are dying to know what is it about Bill Belichick that makes Patriot fans so drawn to him? The longtime NFL coach was born on April 16, 1952 in Nashville, Tennessee as William Stephen Belichick. And his middle name Stephen is the first name of his son who is 33 years old and is the linebackers coach under his father and the New England Patriots. The Patriots have been a dynasty under Belichick, but other fanbases in the NFL say it has all been due to having Tom Brady as the quarterback for almost 20 years now.  People in the current generation need to know more information about Belichick pre-Tom Brady.

Back in 1978, Bill Belichick was a young and hip 26-year-old when he first walked into the facilities of the team from the mile-high in the Denver Broncos. The head coach for Denver was Red Miller who saw potential in Belichick as the defensive minded coach he later would become. Miller set him up with then defensive coordinator Joe Collier to perform entry level tasks any coach would need to learn when just starting out.

He studied film, but this was back in the days of handwriting and notepads, unlike the modern day technological geniuses such as the late Steve Jobs (Apple) and Bill Gates (Microsoft). Belichick wouldn’t overthink things, as he would keep his philosophies simple and comprehensible for his players. This is where Belichick created, Do your job. “He wasn’t about chatting people up.” 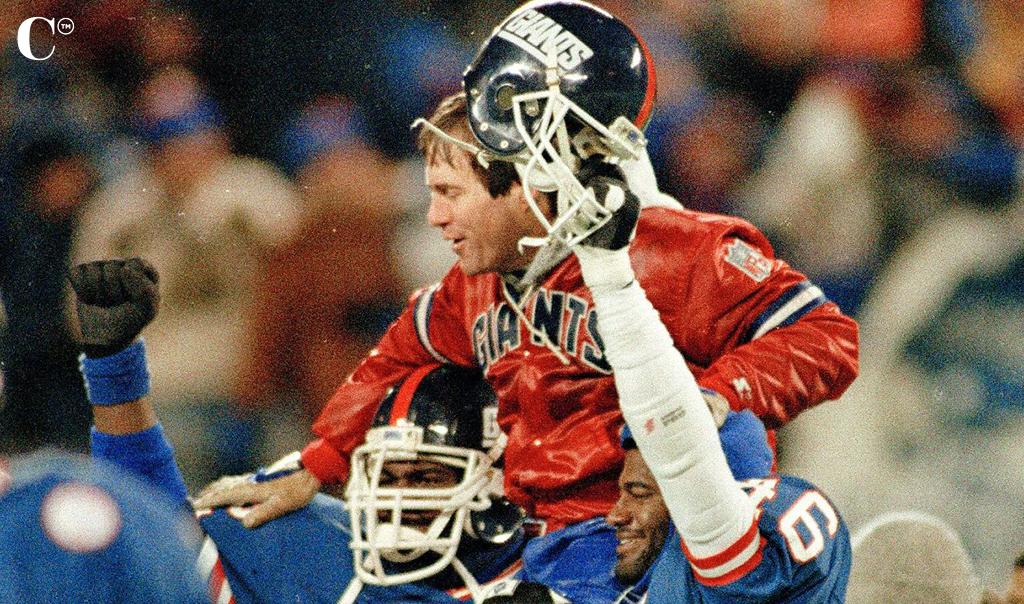 Belichick began with the New York Giants in 1979 under then head-coach Ray Perkins, but his claim to fame with the Giants came as the defensive coordinator under Bill Parcells. Facing the Buffalo Bills and their quick scoring, no huddle offense led quarterback Jim Kelly, they found it hard to score against Belichick’s defense.

Along with Parcells, Belichick advised the offense to control the clock by running the ball down the Bills throats to keep their offense off the field. It worked even though the Bills scored on all but one of their offensive possession.  The score was only 20-19 and the Bills were in a position to kick the Super Bowl winning field goal. The kick went wide right and the Giants held on for the 1 point win. In the end, the Giants had the ball for nearly 40 minutes of time possession, and Belichick was credited for this game plan despite running the defensive side of the ball.

Belichick left the Giants in 1991 and was hired by the original Cleveland Browns under owner Art Modell as their new head coach. He put together a staff to include defensive coordinator Nick Saban (now the head coach of Alabama) and newly hired team researcher Jim Schwartz (now the defensive coordinator for the Philadelphia Eagles). The Browns went 36-44 under Belichick and as a result, he was let go in 1995. This was the last head coaching gig Belichick would serve until 2000.

In 1996, head coach Bill Parcells asked Belichick to reunite with him as he was hired as the defensive backs coach and assistant head coach with the New England Patriots. The Patriots went 11-5 under quarterback Drew Bledsoe who was selected by New England as its #1 draft pick in 1993. The Patriots would make the Super Bowl where they would lose 35-21 to the Green Bay Packers led by Hall of Fame Quarterback Brett Farve, and MVP wide receiver Desmond Howard out of Michigan. After the 1996 season, Parcells and Belichick would reunite for the third time, but with the Patriots AFC East rival, the NY Jets.

Belichick once again served as an assistant to Parcells with the Jets from (1997-1999). In his first year with the Jets, Belichick and Parcells reached the AFC-Championship where they would lose to the Denver Broncos led by quarterback and now current Denver general manager John Elway. After 1999, Parcells retired following a disappointing 8-8 record in which quarterback Vinny Testaverde ruptured his achilles tendon and missed the rest of the season.

In 2000, Belichick was given the head coaching position of the New York Jets when Bill Parcells called it quits after the 1999 season. He would only coach the team for one day as he would officially resign by writing the resignation on a napkin. Little did the Jets know how this would later come back to haunt them. 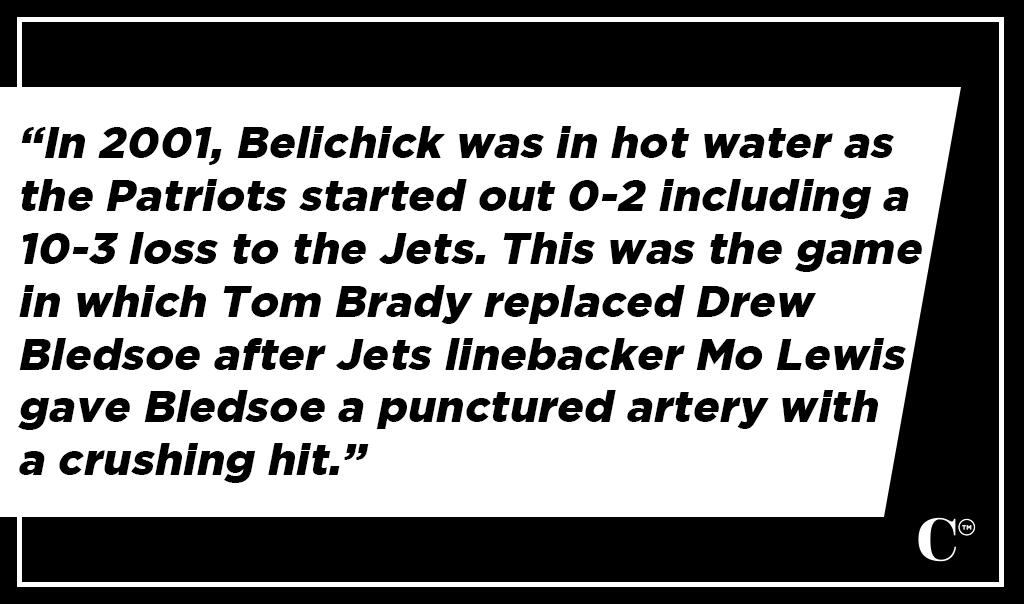 After resigning with the New York Jets, Belichick returned to the Patriots as he was hired by team owner Robert Kraft to be the team’s new head coach after Pete Carroll was hired to coach for the USC Trojans.

Belichick only went 5-11 in his first year as head coach, but during a 34-9 loss on Thanksgiving to the Detroit Lions, sixth round rookie QB Tom Brady appeared in the game. In 2001, Belichick was in hot water as the Patriots started out 0-2 including a 10-3 loss to the Jets. This was the game in which Tom Brady replaced Drew Bledsoe after Jets linebacker Mo Lewis gave Bledsoe a punctured artery with a crushing hit.

It was brought to our attention that Bledsoe’s injury wasn’t life threatening, and this is what he had to say; “Every once-in-a-while I’ll see something where it is like, a celebration of the day I almost died,” Bledsoe said, “and that part, I don’t like.”

Bledsoe’s injury paved the way for the birth of the Brady-Belichick dynasty that would be seen for the next 20 years.

When Belichick made the decision to take Eastern Illinois quarterback Jimmy Garroppolo in the second round of the 2014 NFL draft, Patriots fans went bonkers as he was seen as the future successor to their team’s durable franchise quarterback Tom Brady. During a 41-14 loss on Monday night in Week 4 against the Kansas City Chiefs however, fans and the rest of the league thought the Patriots dynasty was over. In fact, Garroppolo came in relief of Brady, throwing for his first touch down pass to tight end Rob Gronkowski in the fourth quarter. But the Patriots would only lose two more games on the season to finish 12-4 in 2014.

Garroppolo then earned his first super bowl ring as a rookie.  The Patriots survived a Seattle fourth and goal on a Malcom Butler interception to win the game 28-24.

In 2017, Belichick decided to make what would turn out to be a controversial move for the Patriots’ organization moving forward. He traded Jimmy Garroppolo to the San Francisco 49er’s in-exchange for quarterback Brian Hoyer and a second-round-draft-pick in 2018. With the 49er’s, Garroppolo made an immediate impact, winning his first-five starts in which the team would start 2-10, but then winning out the rest of the season to finish with 6 wins. Meanwhile, the Patriots still led by Tom Brady reached Superbowl 52, but lost 41-33 to the Philadelphia Eagles on a failed hail mary attempt in the end zone to Rob Gronkowski on the final play of the game. 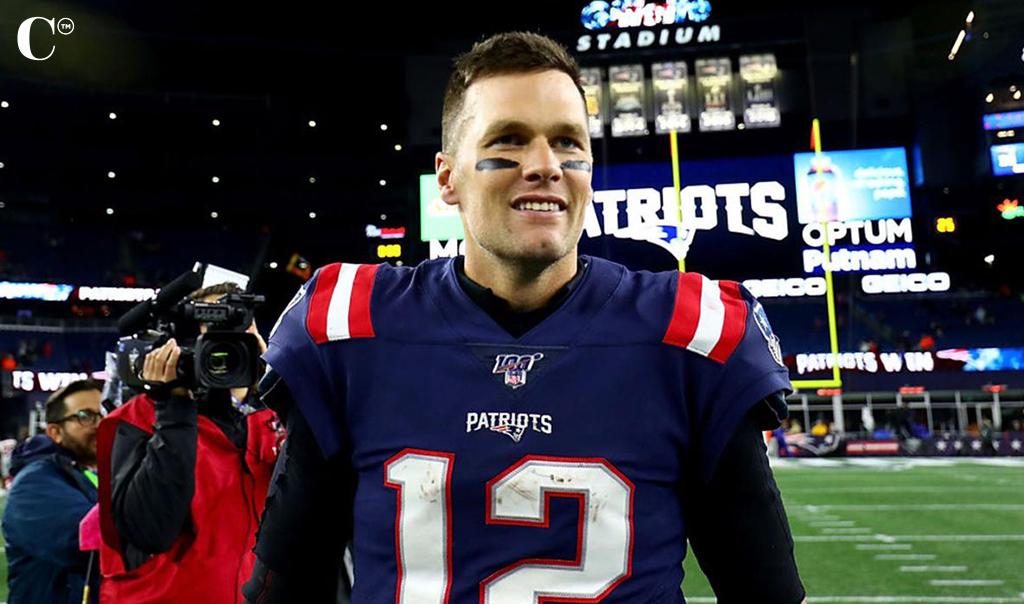 After the Patriots lost 21-13 to the Tennessee Titans in the 2019 NFL-wild card playoffs, it was expected that this were to be the last playoff-game of the nearly 20-year partnership of Tom Brady and Bill Belichick.  In March 2020 during free agency, the 42-year-old Tom Brady and 67-year-old Bill Belichick decided to mutually split as Brady signed with the Tampa Bay Buccaneers. Needing a solid quarterback to replace Brady, the Patriots went and grabbed (former #1 draft pick in 2011, and Carolina quarterback), Cam Newton in free agency. While Belichick knew that having Newton would not be the same as Brady, he did see the Super Bowl (50) appearance by Carolina that was mainly because of Newton’s leadership and also the efficiency of Carolina’s offense.

Newton has shown flashes of what he can bring to the Patriots, but inconsistent play and being out against the Kansas City Chiefs due to testing positive for Covid-19 has led New England and Belichick to a 2-4 start.

Is Belichick’s success only because of Brady, or will the coach prove he can still have the success he’s had with a different quarterback?