‘Black Panther: Wakanda Forever’: The Reverence and the Women Are Front and Center 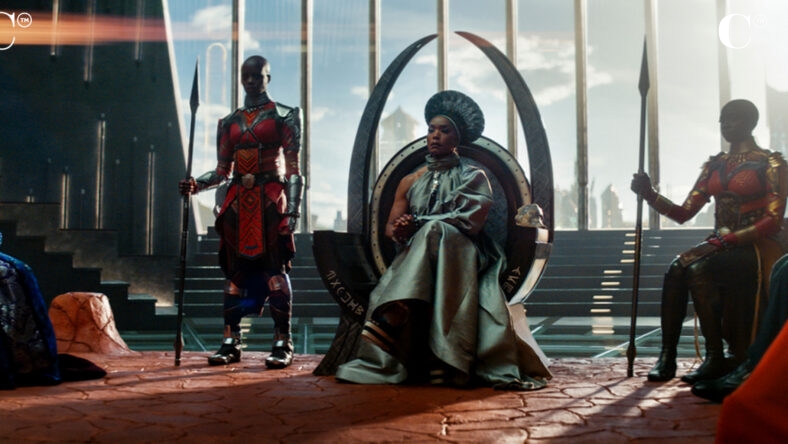 In the four years since audiences first laid their eyes on Wakanda the already high  expectations have only been climbing, exponentially.

And why wouldn’t it? The movie was revered by Marvel fans as a new world came to life onscreen. The African-American community loved it for its positive and inspiring messages. And with its opening weekend pulling in a $202 million domestic payday, Hollywood was instantly enamored. For the record, to date Black Panther has grossed  just over $1.3 billion across the world.

What can we say, film became a cultural phenomenon in every sense.

Yep, the world fell in love with Wakanda.

The world wanted to live in Wakanda.

That is where we find Wakandans in Black Panther: Wakanda Forever… in mourning. Director Ryan Coogler returns for the sequel and echoes the grief of the public with the grief in the story. We start on the one year anniversary of King T’Challa’s passing.

Queen Ramonda (Angela Bassett) sits upon the throne and handles the business of the nation. That business includes protecting Wakanda from the greed of the outside world. Not surprisingly everyone wants their hands on that very valuable vibranium.

In an attempt to extract the precious resource an entirely new nation of protectors of vibranium is discovered. This nation, Talokan, resides under the surface in the sea and is led by Namor (Tenoch Huerta Mejía).

Namor, with his pointy ears and winged-ankles has a centuries old beef with the surface world. Seems long ago his ancestors were forced into the water to escape the Spanish colonization and the enslavement of his people.

On paper, it would seem that both Wakanda and Talokan, having a mutually beneficial goal of protecting vibranium, would be perfect allies. But being that this is a Hollywood movie, you should know that isn’t that easy. Soon, the two nations are at odds with one another and the audience is left questioning why these two nations with beauty, history and power, can’t just get along. Not unlike us real folk in the real world right?

At the center of it all are the women of Wakanda. Shuri (Letitia Wright), little sister to King T’Challa is doing her best to lead her land. She along with Nakia ( Lupita Nyong’o), Okoye (Danai Gurira) and Riri/Ironheart (Dominique Thorne) are turning Wakanda into a bonafide matriarchy. As our real world Queen Lizzo sings, “It’s about damn time!”

The women of Wakanda are its strength. We aren’t mad about that at all. The women are ripe for their own franchise and someone needs to get on that right about now.

Review: The Good and The Not So Good

First, the good. Coogler had a gargantuan amount of pressure on his shoulders for this film. I am elated to say that he did an outstanding job helming this production. It is the right amount of reverence for the late Chadwick Boseman. His presence is in the bones of this movie and it shows.

As for the not so good there really isn’t much at all. The very minor observation would be a technical one with the underwater scenes. If you are expecting to see the vibrant colors and expansive wide shots underground you will be somewhat disappointed. While there is a tour of Talokan that is visually appealing, overall it is too dark to make out and leaves an unfinished feeling on these eyeballs.  That was a small let down considering the people that are being depicted belong to such a vibrant and colorful culture. Again, a minor observation.