‘Our Clothes Were Off!’ – Brandi Glanville Finally Reveals ALL Details On Denise Richards Affair!

Fans of the Real Housewives of Beverly Hills have been getting information about the Brandi Glanville and Denise Richards affair piecemeal over the past few months, but Glanville has opened up with details that throw the entire affair into a different light; Richards aggressively pursued Glanville.

In an interview with DailyMailTV, Glanville opened up about everything that happened between herself and Richards. Glanville told DailyMail, “‘I really didn’t think it was going to be as huge as it is. It’s literally everywhere. However, I think the denial with Denise has made it a huge deal, especially since it’s all over Housewives. All I’m interested in is getting the truth out there.’”

It All Started in a Bathroom

Originally it seemed as though the beginning of the affair was the time they slept together at a shared house while filming a podcast. But Glanville has revealed that isn’t true; it actually began months before, as they met for dinner in Malibu in 2018.

Glanville explains to DailyMail, “The whole time she kept looking at my boobs. We went to the restroom, and she just kind of threw me against the wall and started making out with me.”

The former fashion model continues, “‘And I was down for it, I honestly didn’t mind. I was like, okay, what are we doing, but this is fun. We were drunk and it’s not the first time I’ve made out with a friend or a girl. I was flattered, it was a compliment. She’s a beautiful girl. She’s Denise Richards. We had a good time and then we went back to the table and had more drinks. Brandi says Denise then came on heavy. ‘She said to me, ‘Oh my God, I always wanted to f–k the s–t out of you. And I was like, what? ‘But I was going with it. I was having a good time.’”

DailyMail shares, “‘…before we left she was like, ‘Oh my God, I hope that you would never tell anyone about this, my personal life is my personal life. I trust you’. To me it was not a big deal, two girls getting drunk and making out, but of course I didn’t know she was married at this point, she never mentioned Aaron once.’ Brandi said Denise did say she wanted to see her again, however, and it wasn’t long before she was bombarding the beauty with texts.”

After that night, Glanville suggests that Richards began obsessively pursuing her. “She was literally texting me every single day… …It was nonstop from her after the first night we met. She wanted to finish what she started, that’s how I felt.”

According to Glanville, what came next was a nearly non-stop series of attempts by Richards to meet up. Glanville claims she came up with excuses for almost every encounter, and Richards’ behavior felt aggressive to her. 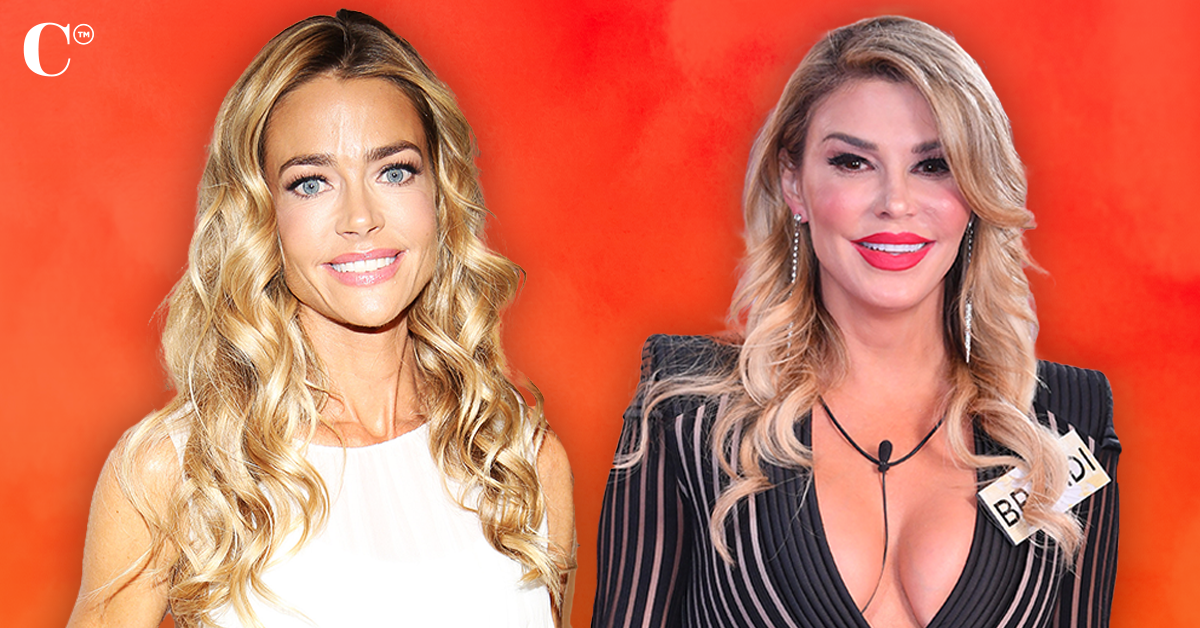 In the DailyMail interview, Glanville explains, “‘I felt almost like it was a guy that wanted to hit it and quit it. Like he wanted to get what he wanted, but this was Denise. All I wanted was a new friend that I liked, that was cool and drank. I really was not looking for any kind of sexual partner, I felt like I was running from her.’

Brandi says the two of them didn’t really see each other until they shot a scene together for RHOBH in November that year.”

After filming the scene together, Richards and her husband Aaron met up with Glanville for dinner, where the conversation turned to intimate topics. According to DailyMail, “Brandi claims it wasn’t long before the newly married couple began openly talking about having threesomes with other women. She also claims her first intimate encounter with Denise was brought up and Aaron was fully aware.

She said: ‘They got on the subject of how do they get other women to come into their marriage and into their bed? They asked if I could help them? And I’m like, ‘um, call Charlie Sheen’. All night we talked about sex and how he (Aaron) was okay as long as she was with a girl, she could never be with a guy. It was an interesting conversation and it just made me feel like, okay, these are very sexual people that are very open.’”

The Night of the Affair

It seems as though the pair continued along with more of the same over the next few months as Richards continued to pursue Glanville via text, and Glanville continued to politely avoid her. In April 2019, Richards and Glanville met again to film a podcast together. Richards was filming a movie with her ex, Patrick Muldoon, and the three met up.

In the interview with DailyMail, Glanville sets the scene by explaining how the trip started, “Denise, who had her daughter and her daughter’s friend staying with her, had promised Brandi a roll away bed to sleep on but one never materialized.

‘When I arrived, I met up with her and Patrick and we all hit it off and were having a great time,’ she said. Patrick and I were just being silly and we started kissing. I think in a weird way, I was making out with him just to put off having to make out with Denise.’

Denise went to bed early to phone her husband so when Brandi came to bed she was already asleep. The following day, Denise went off to film and Brandi looked around Mendocino with her daughter and friend. After Denise and Patrick finished on set the trio started drinking and Brandi recorded a podcast with Patrick in his hotel room.

‘I thought it was great. We were all wildly drunk, and Patrick said, “so did you hook up with Denise last night after you left me?” ‘And I said, no, what are you talking about? But he said, ‘Brandi, I dated the girl for five years, I know she likes girls.’ That night we all got even more drunk than the night before and went back to Denise’s cottage. The girls were asleep in their room.’”

Glanville says Muldoon returned to his room eventually, and left her alone with Richards. Glanville was tired and ready to sleep, but soon things turned hot and heavy. Glanville says, “‘I was really ready to pass out. And the next thing I know we’re making out, she’s on top of me and our clothes are off. And yeah, we’re going at it, we had sex. But Denise said to me, ‘I don’t understand, you seem like you’re not into it.’ And I wasn’t, I just didn’t want to do it.’

Brandi [says] she bit Denise several in the throes of passion in what she claims was an attempt to put her off sex. ‘It’s not that I don’t think she’s a beautiful, attractive woman. I just put myself in a situation that I didn’t want to be in,’ she explained.

Brandi admits she went to Mendocino with her eyes open though, saying: ‘I put myself in that situation, so I’m not a victim.’”

The Next Morning, a Different Tune

Glanville was shocked by Richards’ reaction the next morning. Glanville told DailyMail, “‘She was like, ‘wow, you left marks all over my body and Aaron, if he ever finds out, he’s gonna kill me. He can never find out.’

I literally did a double take and I was silent for a few minutes. I am not good with secrets. They make me uncomfortable. And as far as I was aware Aaron was one million per cent aware that Denise and I made out the first night we met because we talked about it. He also knew I was going to Mendocino and I was sleeping in the same bed as her, so I was shocked by what she was saying.’”

After that night, Glanville says she didn’t hear from Richards for about six months. “‘The first time I saw her was on Housewives in November and I was so nervous because I didn’t know whether to be like, “screw you” or to shut up and not let anyone know because I was ashamed,’ she said. ‘And I thought people were going to judge me – you’re a cheater, you’re sleeping with a married woman. And so I had this weight on my shoulders.’”

But after Glanville spilled the beans to friend Kyle Richards, Kyle convinced her to open up to the rest of the women. What followed, fans of the show are familiar with. Glanville drops the bombshell at a dinner, and the women confront Richards later in Rome.

Richards immediately went on the defense, denying the whole affair. DailyMail shares, “Later in the show some of the RHOBH cast struggled to believe Brandi’s claims, but when she produced a series of text messages proving her and Denise were close most of the women began to back her.

‘I think as far as Kyle, Kim, Lisa Rina and Erika go, they know I’m a straight shooter. They know I’m not going to make anything up,’ says Brandi. ‘Dorit, I can’t even speak about, but I said, listen, here you go, look at all of the messages please. And they were like, okay, Denise is 100 percent lying. And it really did feel like, ‘Oh my gosh, thank God somebody believes me.’”

Despite texts corroborating Glanville’s story and her rock-solid recounting of events, Richards maintains that nothing happened. Richards paints herself as disgusted by the salacious rumors, and has issued a Cease and Desist order to try to silence the affair. Richards told Entertainment Tonight, “I was very much caught off guard, and the subject matter that seems to be in all the tabloids of late is – I think it’s kind of disgusting that they even talk about it. But that’s something they choose to, and I’ve had worse things said so I can rise above it. I have a very solid marriage and my husband and I, we just rise above it. People will say what they’ll say, and in the big picture, we can’t worry about that stuff.”

Glanville is maintaining her side of the story. If the most recent details are accurate, it paints Richards in an even more unflattering light than before. Before, it appeared as though Richards was embarrassed at having cheated on her husband. However, Glanville’s more detailed account suggests another motive; Richards wants to hide her predatory behavior.

Richards hasn’t reacted yet to Glanville’s open and frank discussion of events surrounding the affair, but this story continues to grow by the day and we will bring you any updates as they occur.

For her part, Glanville said to DailyMail, “‘I was super shocked when Denise said that she was leaving the show. She’s a strong woman. She said she wanted closure all year, so sit down with me and get closure. I think that she just needs more of a narrative that she can control. And you know what, maybe she’s just not built for reality television.’ She added: ‘I just want to know why she made up all the lies.’”