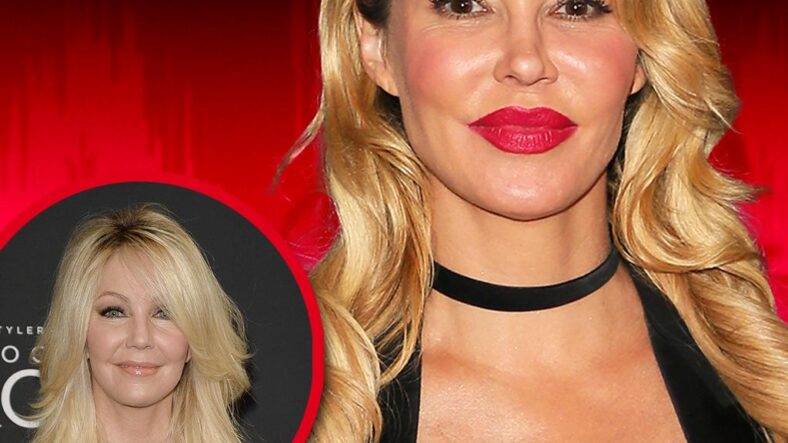 Brandi Glanville claims she received support from actress Heather Locklear after going public with her claims of an affair with Denise Richards months ago on The Real Housewives of Beverly Hills.

After first revealing Heather had contacted her during an appearance on Watch What Happens Live last week, Brandi is revealing more details about the communication that took place between the two of them and suggesting that Heather fully supports her decision to share the news of her supposed romance with Denise.

During an interview with the Daily Mail TV on September 16, Brandi said that after coming forward with her allegations against Denise, she received a direct message from Heather on Instagram.

“During this whole dramatic situation, during the reunion and whatnot, I get an Instagram DM from Heather Locklear who I literally grew up watching on TV and I was kind of starstruck,” Brandi admitted in her bombshell interview.

“She said thank you with a bunch of hearts and prayers and I wrote back to her, I said, listen, you know, the truth always comes out no matter how long it takes and that I’m really sorry that you went through what you went through,” she continued.

As followers of Heather may recall, she and Denise were friends years ago. However, after Denise engaged in a romance with Heather’s now-ex-husband, Richie Sambora, their relationship came to an abrupt end and many tabloid headlines suggested Denise had betrayed their friendship.

Although Denise had reportedly told Brandi during their years-long friendship that she and Heather weren’t as close as the tabloids made it seem, Heather has since informed her that she and Denise were actually quite close.

“Denise told me that she didn’t know Heather, that they weren’t friends at all. And now I’m finding out completely the opposite,” Brandi shared.

During the 10th season of The Real Housewives of Beverly Hills, Denise claimed to her cast mates that despite Brandi’s suggestions about the time they spent together, they weren’t actually friends. However, during Teddi Mellencamp’s baby shower, Brandi proved that they were friends, at the very least, as she allowed her co-stars to scroll through years of text messages that had been sent between her and Denise.

Looking back at Denise’s denials regarding their relationship, Brandi said that after talking to Heather, she’s starting to better understand how Denise operates.

“You know, Denise is now saying that she doesn’t know me and we weren’t friends at all. So I kind of see how she’s operating these days,” Brandi stated.

After Brandi’s cast mates saw the messages she and Denise explained, a number of them, including Teddi and Erika Jayne, found that it was a bit suspect that Denise had so vehemently denied that they were friends, when they clearly were.

Brandi Glanville and Heather Locklear Have Formed a Friendship

According to Brandi, she and Heather are planning to meet for a lunch this week for a chat about their interactions with Denise.

“I feel bad for her because I think that part of a lot of what Heather had to go through (in her marriage) was because of what Denise did,” Brandi said. “Not that her husband was not part of the problem, but when you have a girlfriend and you think that you’re close, you don’t think you have to worry about your husband with that person.”

While Denise and Richie were accused of having an affair behind Heather’s back, they have both insisted that their relationship came after he and Heather parted ways.

Regarding the Real Housewives of Beverly Hills three-part reunion special, which began airing earlier this month, Brandi said Heather attempted to watch the drama between her co-stars play out but was unable to stay tuned in.

“I tried to watch the reunion. I just felt sick, I guess about Denise’s spirit, such a dark place. So I had to turn it off,” Heather allegedly told Brandi in one of the messages she sent to the reality star.

Although Brandi wanted to show the messages she’s exchanged with Heather to her cast mates as cameras rolled for the show, Heather told her she wasn’t on board with her doing so and preferred to keep their exchanges private.

“Probably best not to show it because I’ll get a cease and desist, which she sent me years ago. LOL. I won’t even say anything. I support you fully,” Heather stated in another alleged message sent to Brandi.

During last week’s Watch What Happens Live, Brandi said that while she had asked Heather to appear alongside her on the episode, which was filmed from her home in Los Angeles, Heather told her she would not do so because she had already received a cease and desist from Denise.

After Denise and Richie called it quits on their romance in 2012, Denise spoke to Redbook magazine and insisted that she was not responsible for the end of Heather’s marriage.

“I was no longer friends with Heather months before Richie and I got together,” Denise said at the time. “I don’t want to say what caused the split, but she and I weren’t even speaking then. It wasn’t ever like we’d be shopping and go back to her house and I’d flirt with her husband.”

Denise went on to say that when she and Richie first began dating, they were not having an affair because the divorce process had already begun.

“Yes, I got together with Heather’s soon-to-be ex-husband, but no, I didn’t have an affair with him,” she explained.

She then added that she wouldn’t have dated Richie if she and Heather were still friends at the time.

“If Heather and I had been friends at that time, I would never have crossed that line. But we weren’t,” Denise shared. “The friendship was not salvageable, and in the beginning, Richie and I just talked as friends because we were dealing with similar situations. We never planned for anything to happen.”

“But in my heart, I know I did not break up their marriage. If either Richie or I had felt our marriages were fixable, we wouldn’t have crossed that line… I definitely fell in love with him. That would have been a big price to pay for just some rebound fling,” she explained.

Denise Richards is No Longer Appearing on ‘RHOBH’

Earlier this month, after facing rumors of an affair with Brandi for months on The Real Housewives of Beverly Hills, Denise confirmed that she would not be returning to the cast for filming on its upcoming 11th season.

As for who could take her place, there haven’t been any names thrown out there quite yet. And, with Sutton Stracke, making an impressive debut during her first season as a friend, it is certainly possible that she will be upgraded and that no new cast members will be added.