Louisville Boards up, Bracing for Unrest As Decision on Breonna Taylor Case to be Announced

It’s been seven months since police officers shot into an apartment, killing who they thought was a suspect taking shots 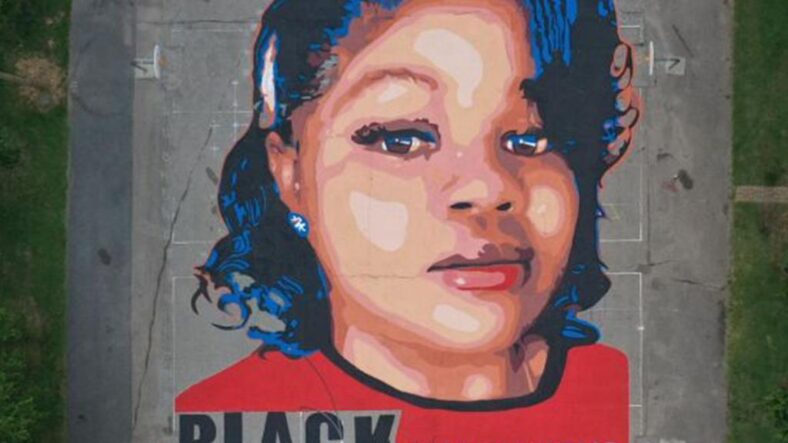 It’s been seven months since police officers shot into an apartment, killing who they thought was a suspect taking shots at them with a rifle. Their, “suspect,” turned out to be the wrong person, innocent and unarmed Breonna Taylor, a 26-year-old EMT. Now, officials in Louisville are on the brink of making an announcement on charges that may or may not be filed in the case, and the city is bracing for unrest if the announcement is made that they will not be charging the involved officers.

What Happened to Breonna Taylor?

On March 12, 2020, LMPD Detective Joshua Jaynes wrote affidavits for 5 “no-knock” warrants on a narcotics investigation he was working. The judge, Jefferson Circuit Judge Mary Shaw, signed off on all five. Taylor was listed on the search warrants due to her association with ex-boyfriend Jamarcus Glover, who was also named on the warrant. Both Taylor’s apartment and car were approved for search.

On March 13th, just after midnight, police gathered on Taylor’s front porch. Although the warrant issued was a “no-knock” warrant, which is exactly how it sounds, LMPD officers claim they knocked and announced themselves first. According to records, at this point they already knew that Taylor would not be with their main suspect Glover, who had already been located. Records indicate that they were unsure whether Taylor had pets or children, and expected her to be home alone.

According to the Louisville Courier Journal, the police contradict themselves from here. Although they claim they expected Taylor to be alone and that they had located their suspect, they geared up for a heavy operation. TheCourierreports, “‘It was a heavy, manpower-intensive operation, and they just needed bodies,’ [Sgt. Jonathan] Mattingly said.

Mattingly said police at Taylor’s apartment repeatedly knocked and announced their presence. He said he was unsure why the warrant was requested as a no-knock, but he was then told to knock and announce.

‘Our intent was to give her plenty of time to come to the door because they said she was probably there alone,’ Mattingly said.

He told investigators they waited ‘more than enough time for the average person or even a disabled person to get to the door’ before deciding to force entry.”

Inside the apartment Taylor and boyfriend Kenneth Walker, who was uninvolved in the warrants, were doing what most people do at night; relaxing in their home. Walker claims no announcement was made, that the first sounds he heard were the police breaking into the apartment. This lines up with statements from witnesses who claim that the police did not announce themselves and that the first sounds and sights they witnessed were the door being broken down with a battering ram, and shots being fired. 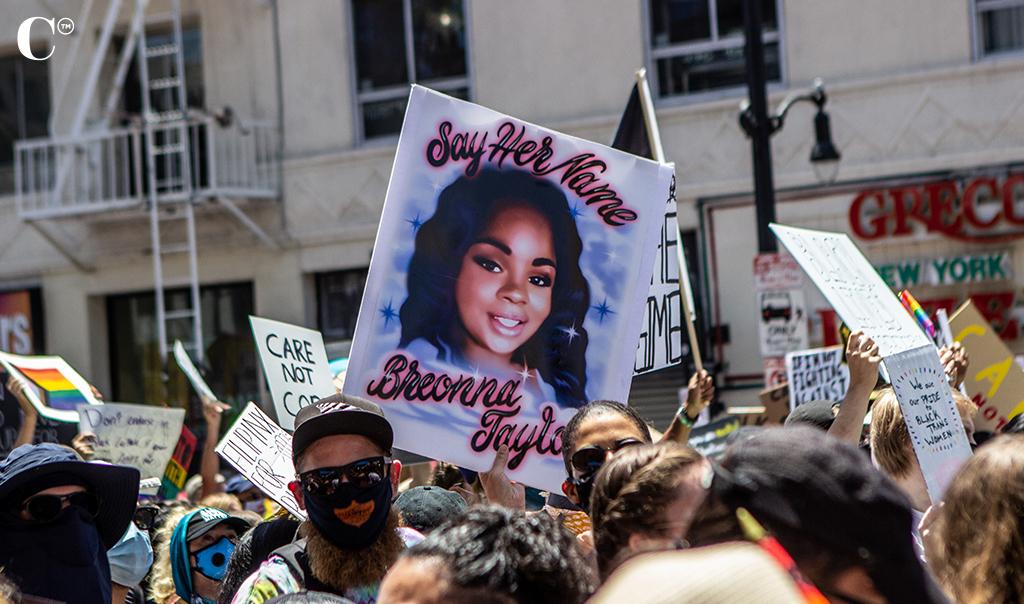 As the door was knocked off it’s hinges by a hand-held battering ram, Walker claims he fired one shot at what he thought were intruders as a, “warning shot.” This lines up with the injuries sustained by officers; Mattingly was struck once in the thigh. Officers, on the other hand, fired over 20 rounds into the apartment; Mattingly, detective Myles Cosgrove, and now-former detective Brett Hankison. Not only did they strike Taylor 8 times with bullets, killing her within minutes, but bullets were found all over the apartment, in the ceiling, and in a neighboring apartment where a 5-year-old child was sleeping. As officers were breaking into his living room, Walker was on the phone with police dispatch pleading for help with who he thought were intruders. Taylor died at 12:48AM in her own hallway; the whole encounter took just over 5 minutes. Walker was arrested for attempted murder of an officer.

The Courier reports that Walker was questioned by the LMPD Public Integrity division; “Walker tells investigators that he and Taylor had gone to Texas Roadhouse for dinner that night, the first that she had off from work in a few days, before getting back to her apartment and watching ‘Freedom Writers.’

Then, there was banging at the door and they got up to see who it was. Within a few minutes, Taylor would be dead.

At one point during the interview, an investigator asks Walker if he’s injured.

‘I wish I had something for that, man,’ the LMPD officer replies.

Describing what took place when he left the apartment, Walker tells investigators he was told that he was going to jail for the rest of his life and that a dog was going to be let loose on him.

“(An officer) asked me, ‘Were you hit by any bullets?’ I said no. He said, ‘That’s unfortunate,’ Walker adds.

Also being questioned were the three officers who fired into Taylor’s apartment. Mattingly described now-fired Hankison as, “worked up.” Hankison was later fired for his actions, and the Courier recounts, “[Interim Police Chief Robert ] Schroeder wrote in a letter to Hankison that he showed ‘extreme indifference to the value of human life’ and that his use of deadly force was improper because he failed to verify it was directed against someone who posed an immediate threat.

Schroeder accuses Hankison of ‘blindly’ firing 10 rounds into Taylor’s apartment and the one next door.

‘I find your conduct a shock to the conscience,’ Schroeder repeated. ‘I am alarmed and stunned you used deadly force in this fashion.’”

Black Lives Matterprotesters arrived in Louisville shortly after, crying out for justice as none of the officers were charged in the days, weeks, and months after Taylor’s death.

On March 20th, Taylor’s family and friends held a wake in her memory. On March 26th, Walker was released from jail. On April 27th, attorneys for the Taylor family filed wrongful death claims against Ofcs Hankison, Cosgrove, and Sgt Mattingly. On may 15th, key party Louisville Postal Inspector Tony Gooden says that his office was not involved in an inspection of alleged drug trafficking in relation to Taylor’s home. This directly contradicts information supplied on the search affidavit that was submitted to the judge which suggested that suspicious packages had been delivered to Taylor’s residence. 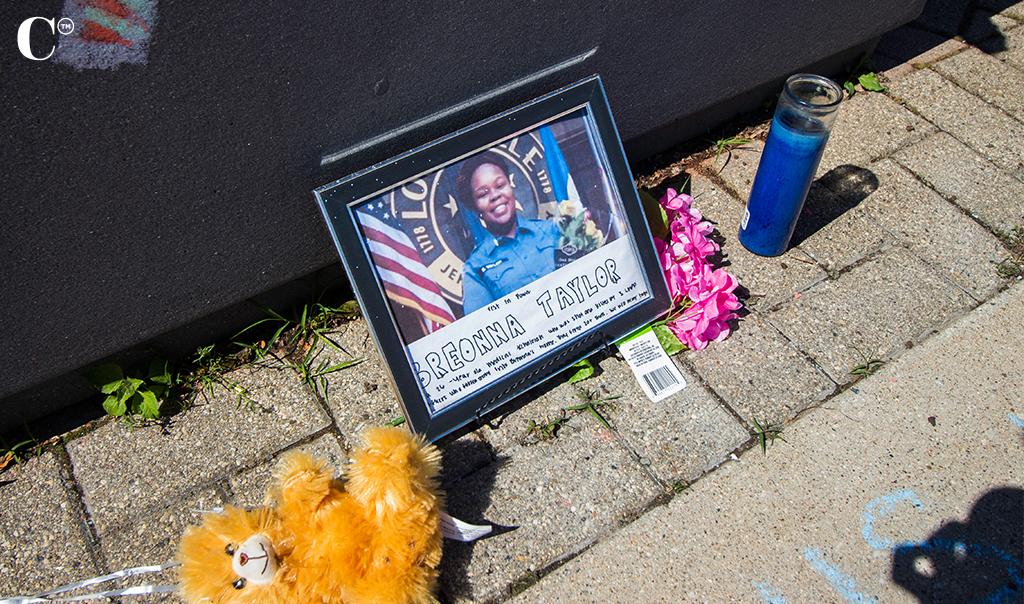 On May 22nd, charges against Walker were dismissed. On June 19th, Hankison’s imminent firing was announced.

What Has Happened Since Hankison Was Fired?

An investigation was launched into Taylor’s shooting death. But as it became clear that no action was quickly forthcoming, unrest rose around Louisville and across the country. In the US, cities were already rocked by protests over the wrongful killing by police of George Floyd, and Taylor’s death threw fuel on the fire as word of her death spread in late March and early April. Critics say Hankison’s firing was a weak attempt to look as though the department was taking action, but that it wasn’t enough. Activists are calling for murder charges for the two officers and one sergeant who fired into the apartment.

Louisville Braces as Announcement is Imminent

NBC News reports, “Authorities in Louisville are seemingly preparing for renewed protests if officers are not charged. Some federal office buildings in downtown Louisville were closed to the public this week, with the first-floor windows of the Gene Snyder U.S. Courthouse boarded up Monday.

The Police Department said on its Twitter account that it was also preparing for the announcement by placing ‘No Parking’ signs on downtown streets. Sgt. Lamont Washington, a department spokesman, also said barriers will most likely be placed around downtown.”

Residents of Louisville are sharing all over social media the sense of unease and anticipation they’re feeling as downtown boards up and locks down.

CELEB spoke exclusively with Brittany C., a lifelong Louisville resident, who offered her perspective; “Things are a little tense, kind of like we’re all holding our breath, whether it’s people afraid of violence breaking out or people afraid that justice won’t be served. It’s not an optimistic feeling either way, kind of foreboding. There’s detours downtown where most protests take place, from barricades being erected, so buses can’t get through certain streets.” 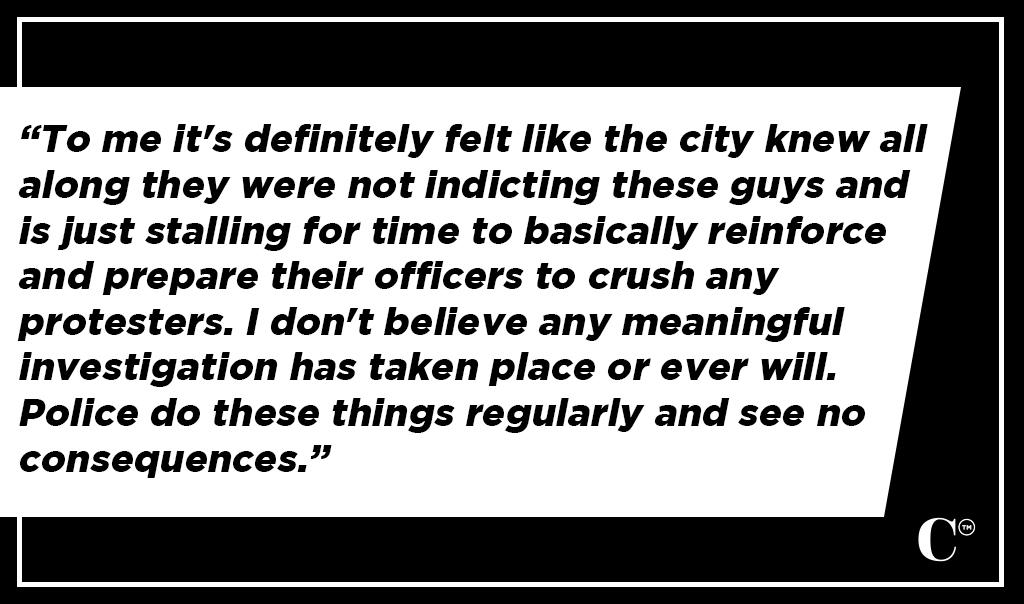 Brittany continued, “To me it’s definitely felt like the city knew all along they were not indicting these guys and is just stalling for time to basically reinforce and prepare their officers to crush any protesters. I don’t believe any meaningful investigation has taken place or ever will. Police do these things regularly and see no consequences.”

The lifelong Louisville resident talks about how jarring the experience is as the city locks down, “It’s a little odd because it’s like living in two cities. There’s the part I live in, quiet, pretty low key, unaffected so far, and then there’s the parts I see my friends dealing with, downtown, in the thick of it. I’ve seen accounts of police wrecking protesters’ supplies like water and first aid supplies. There’s barricades, streets blocked off, boarded up federal buildings. I’ve never seen that before here.”

Brittany adds, “One of my mom’s friends has a daughter who’s been marching from day one and this woman had to fend off a guy who was threatening to run over protesters and even pulled a gun on them. She was arrested. As far as I know, that guy wasn’t. The police walked him to his car even though protesters had footage of him pulling his gun. It feels like more than ever, right wingers feel emboldened to go to protests just to threaten protesters because they know they can just lie and pretend they were in danger and the cops are looking for reasons to arrest protesters anyway. There’s not even meaningful counterprotest happening, just people looking for a fight.”

The area has been rocked with unrest in recent months, and the Louisville resident shares, “In Jeffersontown (a more upper middle class, very white suburb of Louisville) they just held a ‘Take Back Louisville’/ pro police rally this past Saturday. Since [Ruth Bader Ginsberg] died, protest has started to spread a bit into areas like Hurstborne, and often [Attorney General of Kentucky] Daniel Cameron‘s house is a place where protests are held.”

When asked what she expects of the announcement, Brittany responded, “What do I expect? Sadly, I expect the city to announce no indictments will be filed, and any attempts at protests will likely be squashed by a police force that has had months essentially to prepare for the anger and frustration they themselves have fostered in protesters. I fully support the protesters and all actions they take.”

Although officers involved in shooting deaths of suspects are rarely indicted, residents of Louisville hold onto thin hope that maybe this time something will be different. The world certainly feels different in the months since Floyd and Taylor were murdered; anger simmering below the surface has been thrust to the forefront. Grief and heartache over police brutality have entered a dialogue previously reserved for discussions on policy. As Louisville braces for what is sure to come soon, the world watches and hopes that maybe this time, justice will be served.