Cast of ‘Dahmer’ Talk Drama and Darkness of Netflix Show

“Interestingly enough, this is one of the first times that we have all gotten together,” says Ryan Murphy of his 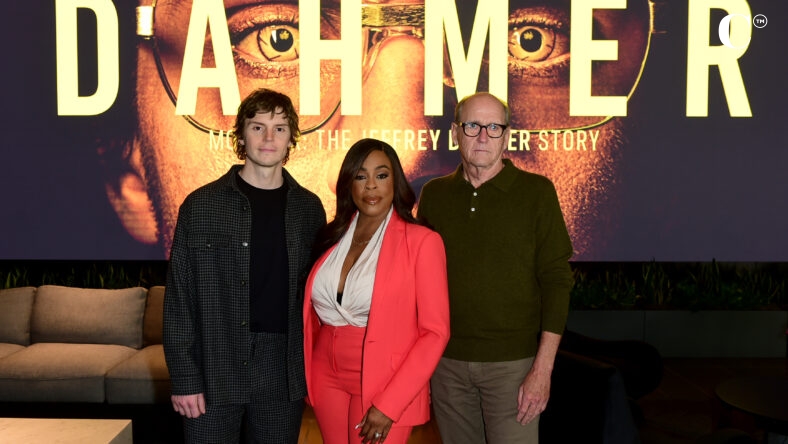 “Interestingly enough, this is one of the first times that we have all gotten together,” says Ryan Murphy of his Dahmer – Monster: The Jeffrey Dahmer Story cast. The executive producer extraordinaire, Evan Peters (Mare of Easttown), Richard Jenkins (Step Brothers) and Niecy Nash (Reno 911!) all met up for a panel discussion on one of the most talked about shows this season.

Peters And The Darkness of Dahmer

For Niecy, who played Glenda Cleveland, next door neighbor to the infamous serial killer, it may as well have been the first time that she met co-star Evan Peters who played the title role. “People would say, ‘What is Evan like? And I would say, ‘I don’t know, I don’t know the man!’” Niecy said of her time spent shooting with Peters. Nash would come on set and greet her cast mates with warm enthusiasm in the mornings. Evans was having none of that. “He was like, ‘Oh no maam,’” she says of his icy and cold demeanor.  “Then I realized, that is part of his process and I want to respect that,” she said to the audience.

For Ryan Murphy, that totally tacked. He and Peters have worked on multiple projects for years. Murphy revealed that his lead actor in real life is far from the role of Dahmer who he plays on tv.  “Everyone always thinks of Evan as dark and brooding, and I am like absolutely not, Evan is hilarious.”

For Evans, the dark and distant attributes worked hand-in-hand with the role. “Doing the role I wanted to give it 120% the whole way though so I brought in a lot of darkness and negativity.” Peters tells the audience that the decision to take on the persona of the serial killer was beyond daunting. “I was terrified. I really went back and forth on whether I should do it or not. I knew it was going to be incredibly dark and an incredible challenge,” says Peters. “I wanted to dive into the psychology of that extreme side of human behavior.”

That isn’t far from what actor Richard Jenkins did to prepare for his role as Lionel Dahmer. Initially he was less than thrilled about the role. “ I said what’s it about,” Jenkins recalled of the first conversation between him and Murphy. “And you went Jeffery Dahmer. And I went ugh.” But Jenkins read the first three scripts and he was in.

“Immediately it interested me,” he says. Ultimately it was about the humanity that was baked into the script.  “I kept thinking to myself, ‘If Jeffrey Dahmer is your son, do you stop loving him?’” Jenkins shakes his head. “You don’t.” The Oscar nominated actor admitted, “The last thing that I thought about a Jeffrey Dahmer movie was that it would be so human. That is what you [Murphy] wrote and it was beautiful.”

That was 100% by design. “We weren’t really interested in Jeffrey Dahmer the monster. We were interested in what made the monster?  Who was complicit in the making of the monster?’ he continues. “We tackled systemic racism. We tackled homophobia. We were always thinking of the victims.” Murphy addressed some of the backlash to the series saying they reached out to upwards of 20 victims’ friends and family while in production. They heard back from no one he reports.

Peters concentrated on getting Dahmer’s characteristics correct. “He has a very straight back, he doesn’t move his arms when he walks. So, I put weights on my arms to see what that felt like. I wore the character’s shoes with lifts in it, his jeans, his glasses. I had a cigarette in my hands at all times. I just wanted all this stuff,  these external things to be second nature when we were shooting,” he says.

After four months of prep and six months of shooting, when it came to balancing the dark with the light, Evans knew what he had to do. “At the end of the day it is a job and you sort of have to compartmentalize. After the shoot it was comedies and lighthearted things,” Peters says. One of those lighthearted comedies he took in was Step Brothers. Ironically also starring Richard Jenkins.