The investigation into sex offender Jeffrey Epstein‘s sex trafficking ring has led down some dark and alarming paths. Many powerful

The investigation into sex offender Jeffrey Epstein‘s sex trafficking ring has led down some dark and alarming paths. Many powerful people have been caught up in the investigation, and serious corruption has come to light. Now, another unlikely avenue has pulled art auction giants Christie’s and Sotheby’s into a civil investigation of Epstein’s tax filings, as subpoenas have been issued for the two houses to release documents related to Epstein. 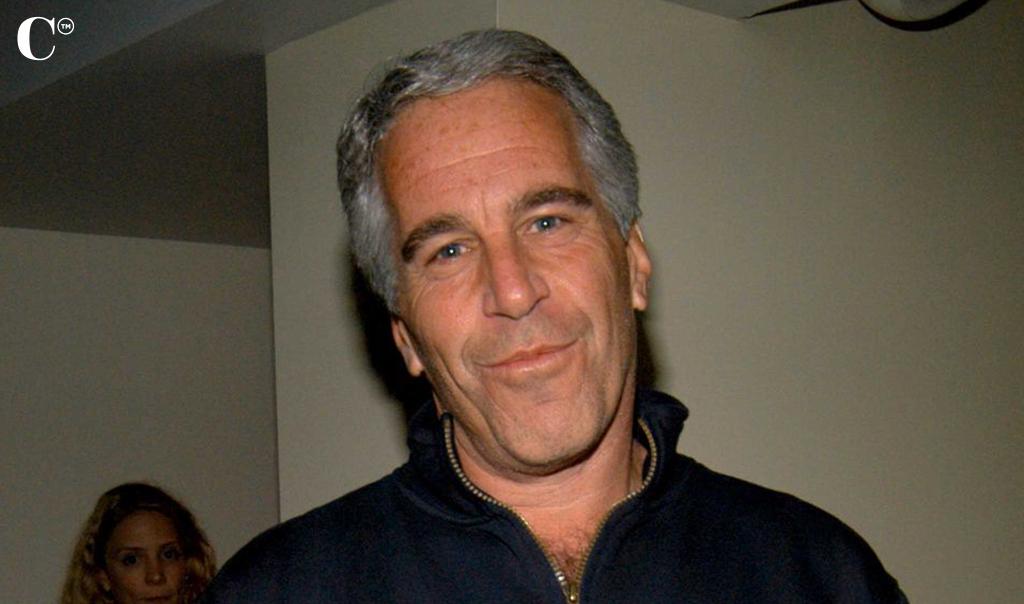 Epstein’s name has long been synonymous with parties full of powerful people and the dark underbelly of Hollywood and Washington’s elite. Epstein’s was a name known by everyone in the halls of powerful as the man to see to scratch particular itches. His so-called, “pedo island,” became infamous as the place where the rich and powerful came to play with the vulnerable; including children.

Over the years, Epstein faced accusations of raping minors. In 2002, a 14-year-old girl stepped forward to accuse Epstein of rape, but he wasn’t arrested until 2005 on the charge of soliciting prostitution and unlawful sex with a minor. Per Refinery, “in May [2006], Epstein and two of his assistants were charged with multiple counts of unlawful sex with a minor, and the case was referred to a grand jury in Palm Beach. After hearing from just one victim, the grand jury indicted Epstein on one count of solicitation of prostitution, but did not include that the victim was a minor in its charges. Alan Dershowitz, who served on O.J. Simpson’s defense team, Kenneth Starr, and Jay Lefkowitz, all represented Epstein.”

Later that same year, the FBI opened an investigation to further explore Epstein’s alleged sex crimes. In 2008,  per Refinery, “on June 30, Epstein pleads guilty to one count of solicitation of prostitution and one count of solicitation of prostitution with a minor. With none of his accusers present, Epstein is sentenced to 18 months in jail, and must register as a sex offender twice a year in Florida.”

Between 2015-2017, the accusations against Epstein escalated as a woman named Virginia Roberts Guiffre filed a lawsuit against the less-protected Ghislaine Maxwell, a close associate and sometimes-girlfriend of Epstein. In the lawsuit, Guiffre says Epstein sexually abused her for 3 years as a minor, and Maxwell was both facilitator and participant in those abuses.

Emboldened by Guiffre’s direct confrontation of the powerful duo, another woman filed suit shortly after, accusing not only Epstein of sexually assaulting her as a minor, but outgoing President Donald Trump as well.

In July of 2019, Epstein is arrested again, this time on charges of child sex trafficking and conspiracy to commit sex trafficking. Epstein pled guilty and was slated to face his accusers in court. However, his victims would never have a chance to face him with their fury; in August of 2019, Epstein died in his jail cell. Although it was ruled a suicide, most people don’t accept that answer and believe he was killed before he could reveal the guilt of powerful people. Who those powerful people are remains the subject of lively debate to this day; prime suspects seem to be either former Secretary of State and First Lady Hillary Clinton and former President Bill Clinton, or outgoing President Trump.

During the course of the investigation, a contact list including names of powerful people was released that suggests they may have been involved with the trafficking Epstein was accused of. However, the list just includes people who traveled with Epstein or to one of his properties and doesn’t prove guilt, so the investigation has remained ongoing.

Maxwell remains in jail, although she has been mostly uncooperative and has refused to rat out her former employer and boyfriend.

How are Christie’s and Sotheby’s Involved with Epstein? 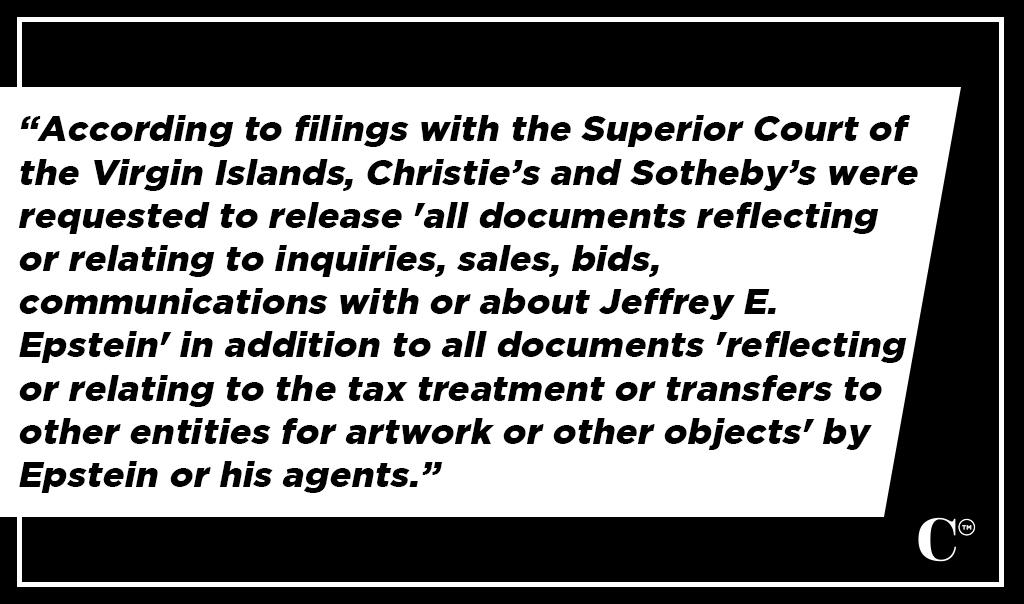 Both auction houses are well-known for dealing in goods with the rich and the powerful. Although the subpoenas for information from Christie’s and Sotheby’s do not seem to be involved with criminal concerns, they are related to civil suits regarding Epstein’s taxes.

OK! Magazine reports, “These subpoenas, along with a third that has been issued to the Chicago Deferred Exchange Company, relate specifically to Epstein’s art purchases. OK! can further reveal that three specific pieces that caught the attention of prosecutors — a painting by Pablo Picasso and two works from Paul Cézanne. Those three pieces stand out because Epstein may have bartered for them by trading in art he or a client already owned while allegedly working out a deal to avoid paying any taxes on the purchase.

They also stand out because the value of all three combined is a staggering $139 million. It seems however that it was not Epstein who was to keep those paintings and that he may have instead been working on behalf of a client. One of the three paintings – a Cezanne watercolor – was purchased by the same company Leon Black has used to buy most of his billion-dollar art collection. The other Cezanne was also purchased by a company that has been linked to Black, while it is unclear who got the Picasso. Nowhere does it state that Black purchased these paintings or had instructed Epstein to obtain the artwork on his behalf.”

Hyperallergic shares, “According to filings with the Superior Court of the Virgin Islands, Christie’s and Sotheby’s were requested to release ‘all documents reflecting or relating to inquiries, sales, bids, communications with or about Jeffrey E. Epstein’ in addition to all documents ‘reflecting or relating to the tax treatment or transfers to other entities for artwork or other objects’ by Epstein or his agents.” 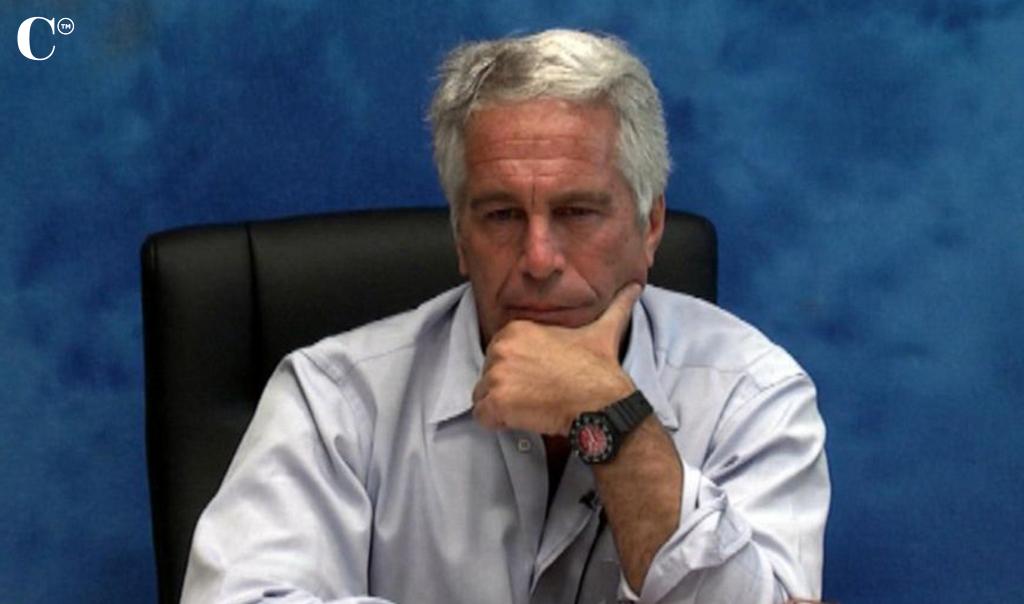 Unfortunately for Sotheby’s, this is not the only woes they’ve faced in recent weeks regarding tax filings. In mid-November, the New York Attorney General filed suit against Sotheby’s for alleged tax fraud. The NYAG claims that Sotheby’s helped a wealthy foreign client avoid tax liability.

It’s not clear exactly how Epstein is implicated in these civil filings, and the subpoenas have not been officially served yet, but are expected to be soon. Sotheby’s has suggested that they will comply fully once a subpoena is legally served.