When the clock struck midnight on October 28, the heads of a half dozen Las Vegas casinos crowded around a 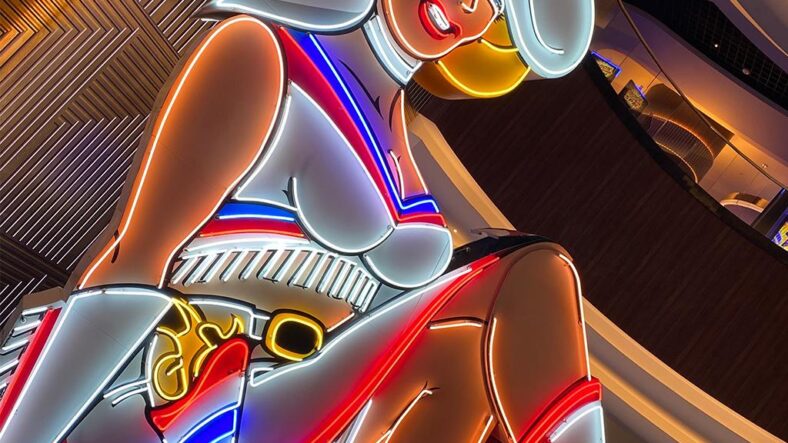 When the clock struck midnight on October 28, the heads of a half dozen Las Vegas casinos crowded around a craps table at Circa Las Vegas to take part in the resort’s ceremonial first dice roll. This rite of passage is the way the gambling Mecca christens a new “player” into the “game”–but it doesn’t just happen every day. In fact it has been more than a decade since a major casino, newly constructed from the ground up, has debuted in Las Vegas and four decades since one opened Downtown. As the doors of Circa Las Vegas swung to welcome thousands of eager tourists and locals who poured in to see the new space, the bones pounded the fresh felt again and again, onlookers cheered, cameras flashed and excitement swelled.

Presiding over the action was Derek Stevens, arguably one of Las Vegas’ top showman and the owner of Circa Las Vegas, The D and Golden Gate, along with his brother Greg. In the world of the neon glitterati, there is no moment more magical: the debut of a new casino. And in 2020, the main event seems all the more anticipated because the chips were proverbially stacked against it happening as a result of the pandemic. But Circa beat the odds, opening ahead of schedule and even hosting a blow out black tie gala for VIP guests and employees with an elaborate production of singers, dancers, showgirls and synchronized swimmers. 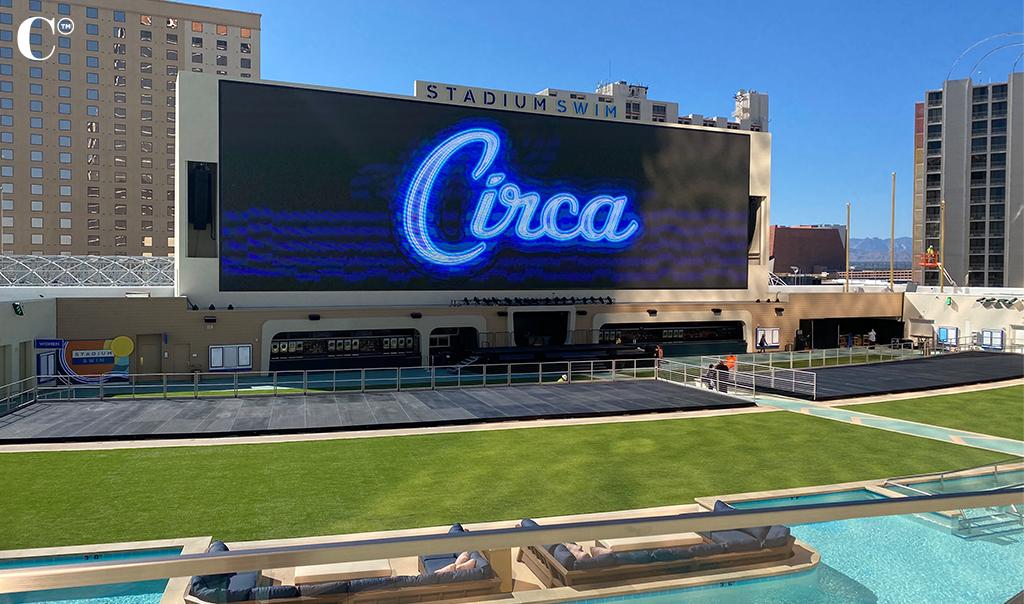 What else does Circa have that the others do not? A stacked lineup of superlatives including the title of first adults-only casino-resort in Las Vegas, the world’s largest sportsbook and longest bar, 777 rooms and suites, five original restaurant concepts, a Stadium Swim pool amphitheater operating 365 days a year, a high-tech parking garage dubbed Garage Mahal, and a two-story casino. Circa might even have the world’s longest escalator—which takes one minute and 21 seconds to reach the pool deck.

“We’ve been working on this project for the last five years, but also a big day for Downtown Las Vegas in general. When we bought the Vegas Club, we weren’t quite sure what we were going to do. We spent some time trying to come up with a strategy that matched up with Downtown Las Vegas,” Stevens says.

What’s Inside the Tallest Building North of The Strip? 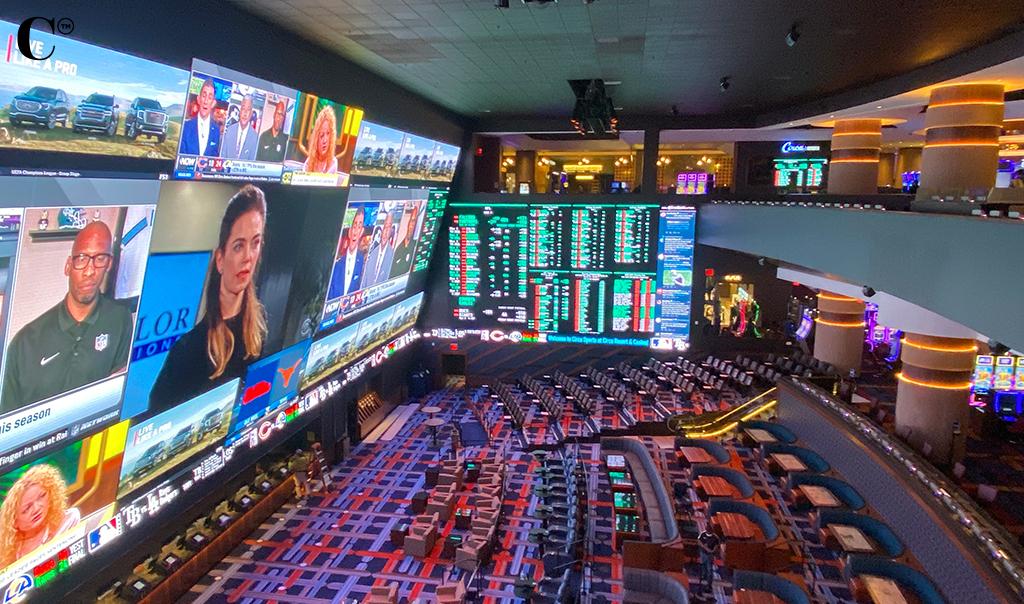 Circa’s two-story casino has 1,350 slot machines and 49 table games but what every sports-betting loving human drools over is the Circa Sports Book–calling itself the world’s largest–and spread over three levels with 1,000 seats and a 78-million-pixel high-definition screen. The screen is so big it takes 10 people to operate. And proving that he loves the little details as much as he loves the big ones, Stevens made sure every seat in the book is equipped with a power outlet. The plaid carpet throughout is even patterned after his signature suits.

Right next to the world’s largest sportsbook is Megabar, Nevada’s longest indoor bar at 165 feet with 120 beer taps and 47 double-stacked TVs.

While you are eating, drinking, gambling rest assured that the air inside Circa might be cleaner than what’s floating around outside. The floor in the casino was raised 18 inches to allow for a system that brings in 100 percent fresh air from the outside at all times and rarely recirculates. 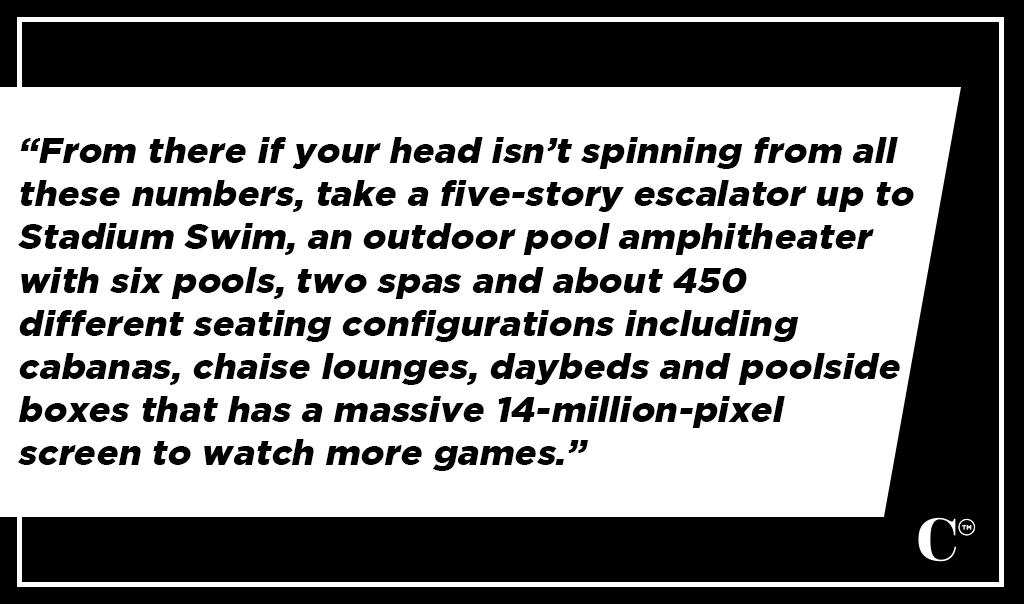 From there if your head isn’t spinning from all these numbers, take a five-story escalator up to Stadium Swim, an outdoor pool amphitheater–with six pools, two spas and about 450 different seating configurations including cabanas, chaise lounges, daybeds and poolside boxes–that has a massive 14-million-pixel screen to watch more games. It claims to be the cleanest pool in town as the water is fully recirculated every hour, six times faster than in other Las Vegas pools, and its pumped with automated chlorine and chemical dispensers as well as state-of-the-art ultraviolet Light sanitation. It might be the hottest pool in town in more ways than one as it can be heated up to 104 degrees in the winter.

No Las Vegas casino is complete without a sexy steakhouse and Circa’s has a pedigree that poises it. to become the top in town. Barry’s Downtown Prime from Chef Barry S. Dakake, former chef of the legendary 9 Steak and later Scotch 80 at Palms, features eight intimate rooms with works from 40 artists. And meat, lots of meat.

There is Art, People! 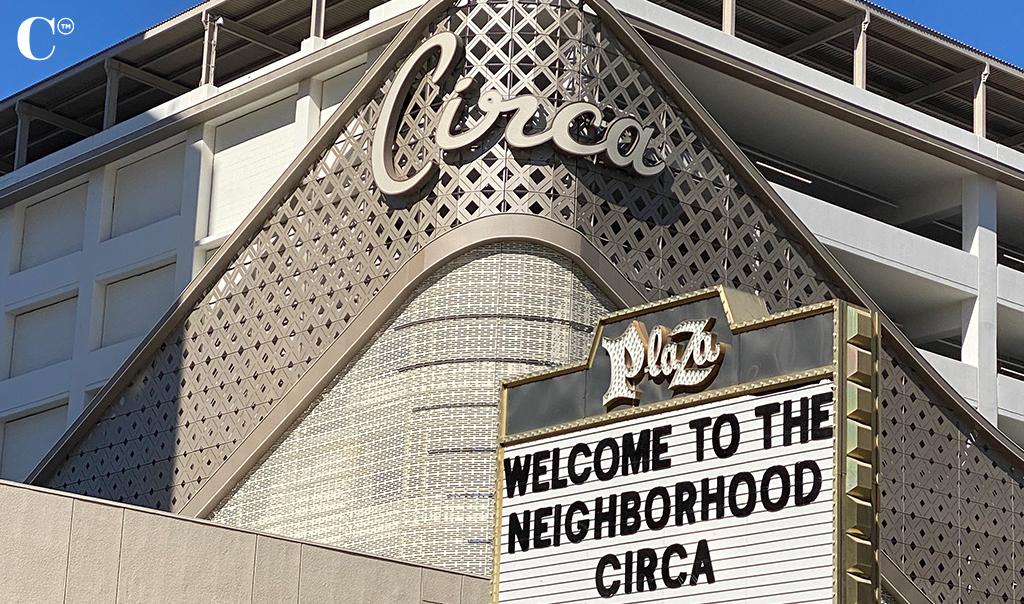 These days what’s on the walls of the casino is just as important as the action on the floor as the trend over the last decade has been for casinos to double as art galleries. In 2018, Palms Casino Resort kicked off its $690 million renovation by unveiling what many described as the most opulent modern art collection ever seen in a resort environment. Circa puts a new spin on the concept with a collection that celebrates both the history and the future of Las Vegas. The centerpiece is a 40-year old, 25-foot blonde kicking neon cowgirl named Vegas Vickie. She presided over the Glitter Gulch strip club until it was torn down to make way for Circa. She married Vegas Vic, her signage significant other in 1994. They consciously uncoupled in 2017. As part of the restoration, Young Electric Sign Company fixed her kick, which hasn’t worked since the ’80s.

Behind the front desk, Vickie goes cubist, with a Picasso-esque interpretation of her famous buxom form by local artist Jelaine Faunce as part of a three-piece rotating mural. And of course as its name would suggest Garage Mahal, the properties mammoth nine-story parking and transportation hub with 982 parking spaces has its own 22-foot chandelier whirling neon typography exclaiming the resort’s tag line “Time of Your Life.”

The most unique and odd art offering at Circa is the Chris Ihle Gallery, previously featured on Million Dollar Listing, which constructs lifesize Lego-brick statues of people, including Stevens. Thanks to this retail space, we can all have one of ourselves to take home.

In the most genius move of all, the restrooms are strategically placed in the same location on each floor to make them the third easiest thing of all to find–after the sportsbook and the bar.

Circa’s hotel rooms will open in December as well as its crown jewel, the Legacy Club, a rooftop lounge with panoramic city views on the 35th floor. Rumor has it there will be a 10-foot display of 1,000 ounces in gold in the Club, a fitting symbol solidifying that 2020—while known for a lot of things–will also be documented as the year Stevens became the King Midas of Fremont Street.