On Friday, Florida reported it’s youngest COVID-19 fatality to date. The death of a 6-year-old girl from Hillsborough County was 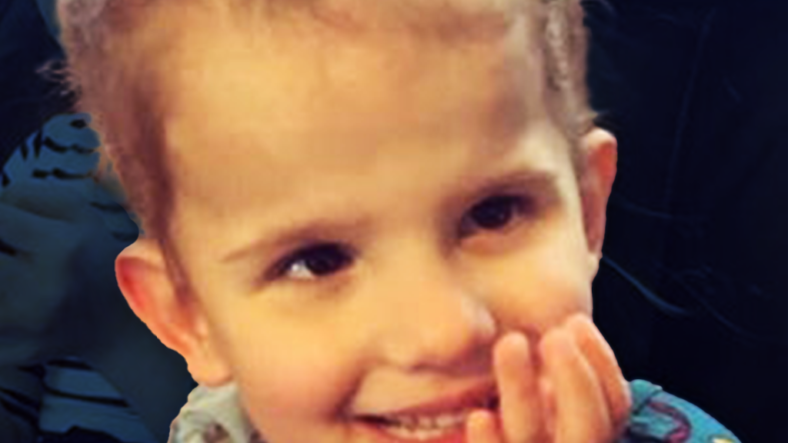 On Friday, Florida reported it’s youngest COVID-19 fatality to date. The death of a 6-year-old girl from Hillsborough County was reported by the Florida Department of Health on Friday. The child’s death marks the 8th COVID-19 fatality among children in Florida since the pandemic’s records started.

Not much info has been released about the child

The Hillsborough County child was said to have died from coronavirus complications. There was no info released at the time about how she may have contracted the virus, whether by travel or local contact. There was also no information made available on whether or not she had any pre-existing conditions that would have raised her risk of dying from COVID-19.

Nearly 50,000 children in Florida have become ill with the virus

In Florida, since the start of the pandemic, over 600,000 residents have been reported infected with the virus. Over 10,300 have died. Of those cases, over 48,000 infected are children and 800 deaths are attributed to those 0-17 years of age. 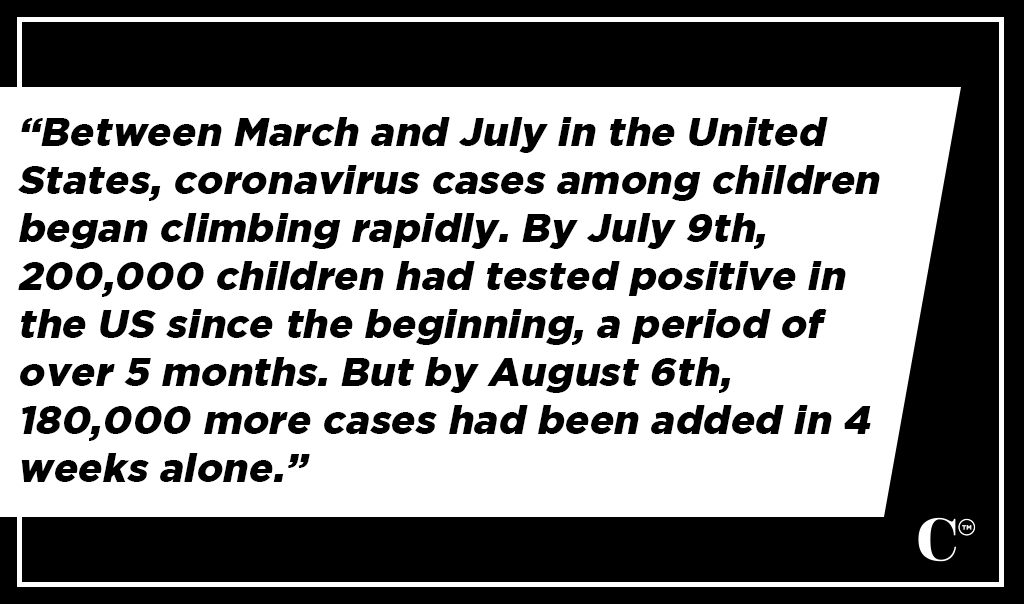 Cases among children are on the rise

Between March and July in the United States, coronavirus cases among children began climbing rapidly. By July 9th, 200,000 children had tested positive in the US since the beginning, a period of over 5 months. But by August 6th, 180,000 more cases had been added in 4 weeks alone. This represents a nearly 90% increase in cases among children, and suggests a disturbing trend as schools begin their opening procedures in August and September. In the US, 338,000 of the 5.1 million positive cases are children.

Not much is known about effects of the virus on children

Unfortunately, the effects of the virus on children remain largely unknown. It’s also unknown how much of a role children can play in spreading the disease. Cases among those aged 0-10 show relatively mild symptoms and may result in them coming into contact with more people than those who show severe symptoms. Until recently, the World Health Organization had signaled that they considered children a lower risk as disease vectors. But as schools face re-opening, WHO has updated their recommendations that emphasize the need for children ages 6-12 to wear masks especially in places of high community transmission, and for those 12 and older to wear them with the same frequency as adults. And studies have shown that children aged 10-19 spread the virus as readily as adults.

Symptoms of COVID-19 infection in children and adults are similar and include, but are not limited to, the following (Per CDC website):

Schools have been closed, experts worry about the effect of re-opening

The CDC has made note that while children have fewer cases than adults, it may be due to the fact that schools have remained largely closed since mid-March. Children represent one of the most effectively isolated demographics to date in the pandemic. As schools reopen and cases begin appearing in some districts, experts wonder how long this trend will continue of fewer cases among children. 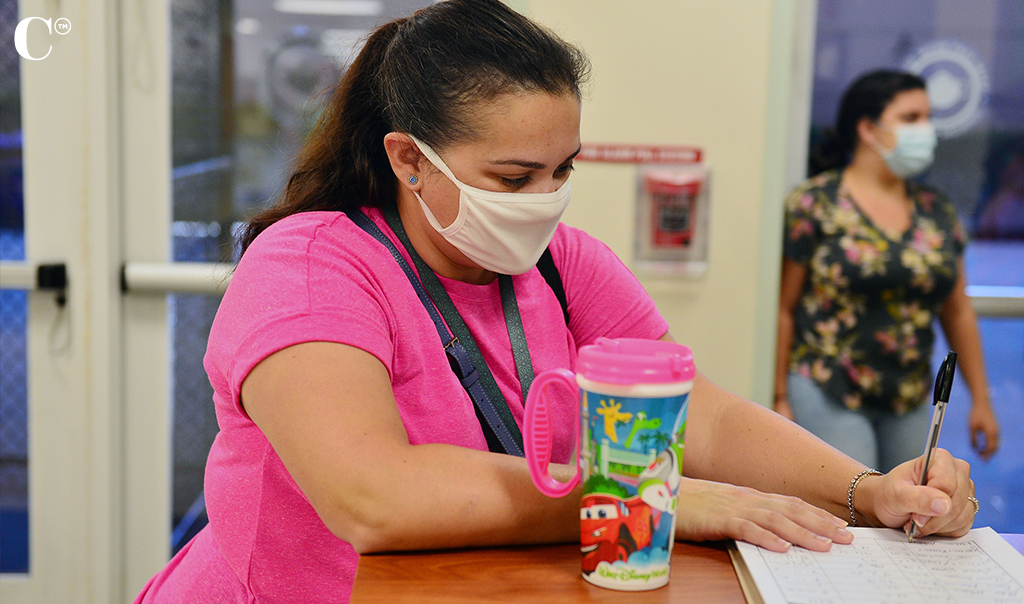 Educators square off with politicians over re-opening plans

In many states, teachers are fighting with politicians and district administrators to give more flexibility for schools to decide if they can safely open brick-and-mortar schools. As cases rise among children, many feel that virtual or distance-learning options are the safest course for teachers and students when returning initially. But in places like Florida, politicians have stepped in and made stringent requirements for their districts’ reopening or else risk losing state funding. Florida’s Education Commissioner Richard Corcoran issued an Executive Order in early July, with the encouragement of Governor Ron DeSantis. The EO required that all Florida public schools open for full-time brick-and-mortar schooling by the end of August.

Critics say this ignores the reality that some counties and districts are in a safer position to open than others. Opponents of the order say it takes away flexibility and puts students and educators at risk. Some even accuse Corcoran and others who are pushing school reopening of adhering to an agenda to force the economy back on it’s feet, pushed by President Donald J Trump. The accusation is that the push to re-open the economy shouldn’t ignore the concerns of educators and safety needs of students.

Teachers see a glimmer of hope in Florida 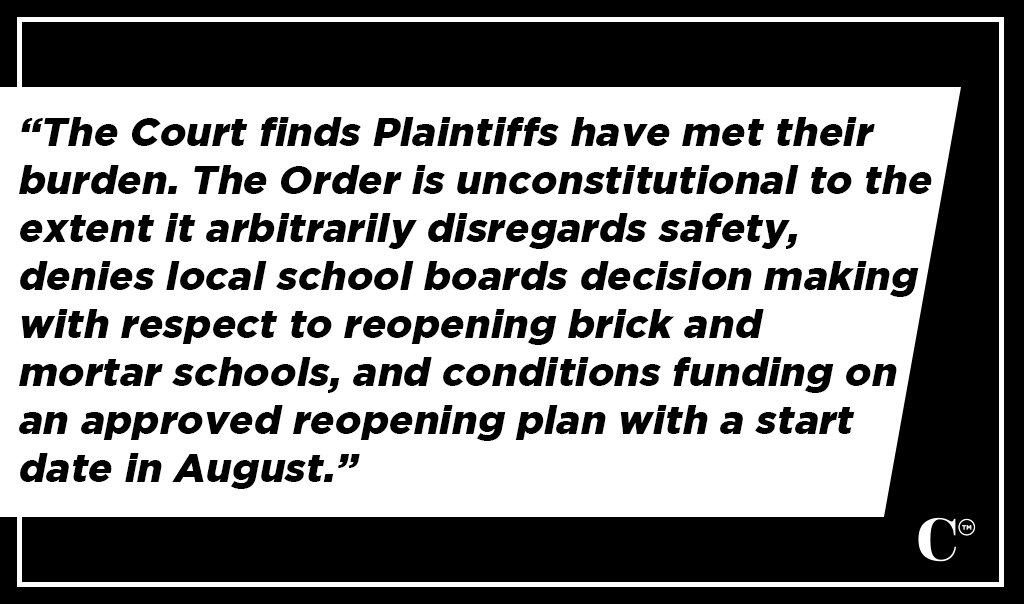 On Monday, a Florida judge ruled the order unconstitutional, placing an injunction on the requirement for schools to push forward with brick-and-mortar opening. While it’s expected that the State will appeal which will trigger an automatic stay on the injunction, those opposing the order are already planning to fight to overturn the stay. If they can overturn the stay, schools will be allowed to self-determine by district when and how they will open, which will allow administrators to respect the individual safety needs of their communities.

The Judge’s statement on the ruling read, “The Court finds Plaintiffs have met their burden. The Order is unconstitutional to the extent it arbitrarily disregards safety, denies local school boards decision making with respect to reopening brick and mortar schools, and conditions funding on an approved reopening plan with a start date in August. The Order will, however, pass constitutional muster if its unconstitutional portions are severed. And it would still require local school districts to provide a high-quality education, under the circumstances – the circumstances being this horrible pandemic.”

The pandemic is far from over

With schools re-opening and cases rising rapidly, the death of a 6-year-old is a grim reminder that the pandemic is far from over. So much uncertainty remains around how the virus has and will effect children. As they begin to interact more in school and Fall activities, Florida is certain to see more cases and deaths among children. Hot weather in Florida lingers well into the Fall, so people will continue to congregate in air-conditioned indoor spaces, which allow for generally poor ventilation. While it would be nice to imagine that no more children will become ill or die, this is certainly not the future Florida and other states face.