We have extensively been covering the Cozy Corner Child Care Center in Kimball, Michigan. As our readers know, Cozy Corner 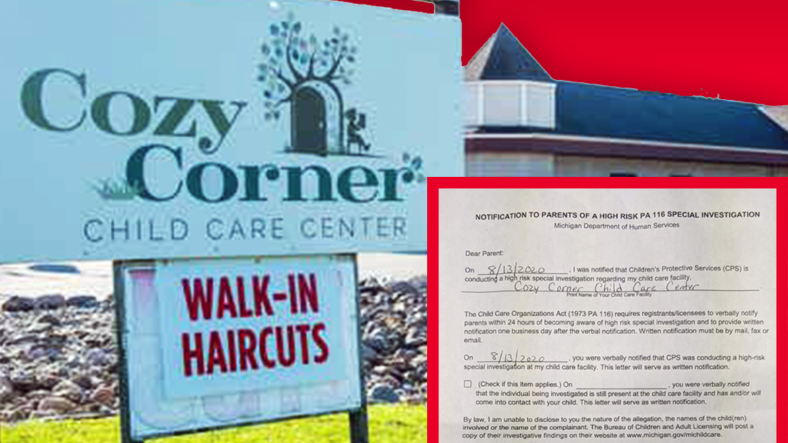 We have extensively been covering the Cozy Corner Child Care Center in Kimball, Michigan. As our readers know, Cozy Corner has had a multitude of incidents over the past few years, from children being dragged across the floor to inadequate supervision to blocked emergency exits and more.  What’s more is that owner Chris VanBurskirk is married to a man, Tim, who is a registered sex offender. Many reports we’ve covered have stated that Tim was seen on the property while children were present, had relieved teachers so they could go on their breaks, and more.

While there have been protests against the facility- as well as parents that have come forward to us to share their experiences- Chris has called the claims being made against Cozy Corner “categorically untrue” after it was reported that the facility was under state investigation on August 18th by The Times Herald.

Now, we have exclusively learned that not only is Cozy Corner under an investigation, but it’s being billed as a “high risk” investigation. What’s more is that a source has come forward to CELEB to provide  personal family emails between Chris and other members of her family, and they touch on Tim being a sex offender. 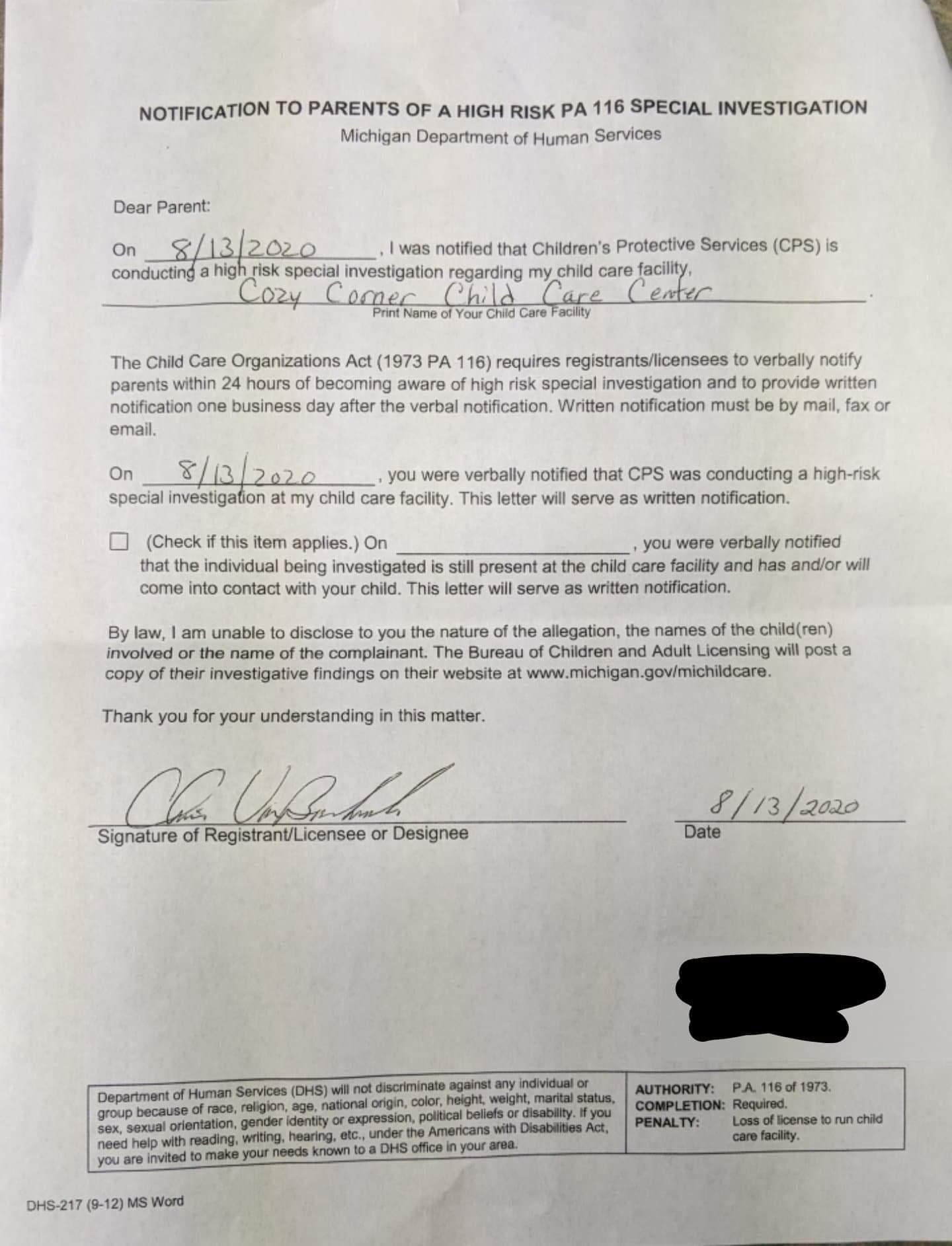 As can be seen in the above document signed on 8/13/2020 that Chris had to send out to parents with Children at Cozy Corner Child Care Center, it states the following:

“NOTIFICATION TO PARENTS OF A HIGH RISK PA 116 SPECIAL INVESTIGATION

On 8/13/2020, I was notified that Children’s Protective Services (CPS) is conducting a high risk special investigation regarding my child care facility, Cozy Corner Child Care Center.

The Child Care Organizations Act (1973 PA 116) requires registrants/licensees to verbally notify parents within 24 hours of becoming aware of a high risk special investigation and to provide written notification one business day after the verbal notification. Written notification must be by mail, fax or email.

On 8/13/2020, you were verbally notified that CPS was conducting a high-risk special investigation at my child care facility. This letter will serve as written notification.”

The next box, which Chris did NOT check off- as it claimed to only check if this item applies- states “On ___, you were verbally notified that the individual being investigated is still present at the child care facility and has and/or will come into contact with your child. This letter will serve as written notification.” 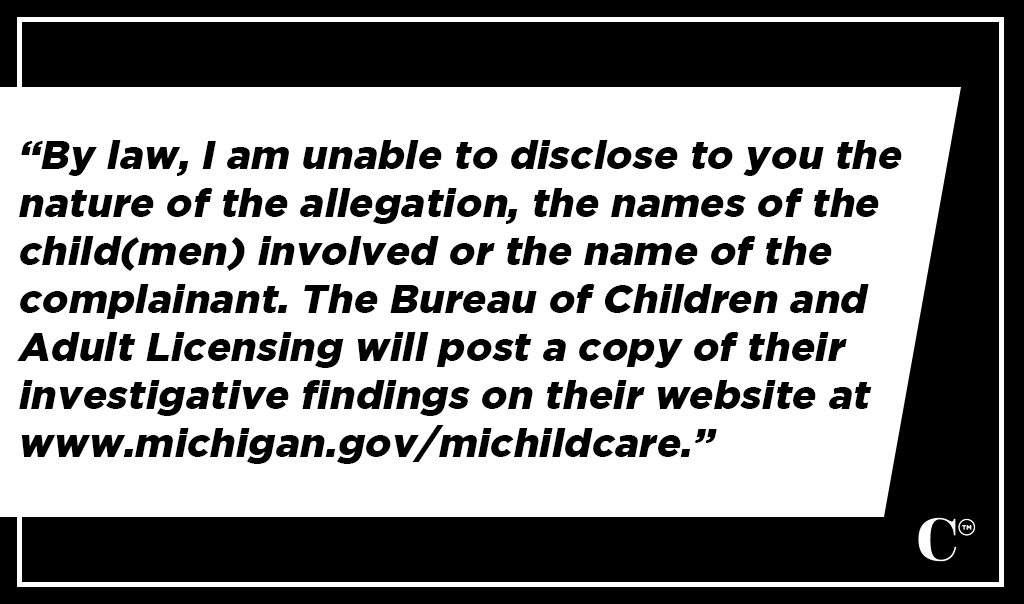 This part makes it clear the investigation has to do with Tim and the claims that he was present around children at the facility/there during hours when children were present. By Chris not checking it, she is asserting that he is not CURRENTLY present at the facility, not that he never was present.

The document does wrap with stating that “By law, I am unable to disclose to you the nature of the allegation, the names of the child(men) involved or the name of the complainant. The Bureau of Children and Adult Licensing will post a copy of their investigative findings on their website at www.michigan.gov/michildcare.”

As can be seen in the copy we obtained, Chris did have to sign and date the document.

Here are some of the main points of conversation between her son/daughter-in-law (SDIL) and Chris [Note that we have redacted names, as we were asked to]:

SDIL: “I am responding to your email because it needed it. The last email of yours was a huge step backwards. We may call Tim a sex offender because he is one. He is one, he admitted to touching (REDACTED), and the State of Michigan agrees.”

CHRIS: “Tim did not choose anything, as we told you he was asleep: just like if you were to sleep next to (REDACTED) or (REDACTED) and talked in your sleep. Of course this was much worse and Tim has paid dearly for it and has taken steps to assure it won’t happen again ever. And I just think it is mean and unfair how you are referring to him and holding judgement over us.”

SDIL: “This is the truth. I do not say it to hurt anyone, believe me I wish it never happened. I was never asked if I was healed and ok with everything back then and I am not now.”

CHRIS: “You were asked if you were healed and you were also apologized to; I am sorry that you are not ok but even though you don’t remember it- I do and you were there for most of our sessions and you did deal with your feelings- and you did want Tim to be a part of our lives.”

SDIL: “I am trying to make it work some how. This is too raw again and I have been advised to take a breather and refocus. Which I am doing. Do not contact me until I contact you. I still want an apology for you two feeling you didn’t have to bring this up.”

CHRIS: “I know you don’t understand this but it was not our responsibility to bring this up to you, we all made our healing and amends years ago and have worked very hard to move on.”

‘He Molested A Child’

Later, the thread between Chris and her son/daughter-in-law continues to go back and forth over Tim, with Chris even claiming Tim did “not choose” to be a sex offender at one point, as she refers to it as a “sleep disorder” and compares what Tim did to a child wetting the bed:

CHRIS: “What happen once and was treated and handled is over.”

SDIL: “By you, (REDACTED) and Tim maybe, not by me. Not by the new members of our family. And it DID happen, it did not disappear.”

CHRIS: “Yes no one is saying it disappeared, and yes I sure you and (REDACTED) have to deal with this, but that does not mean we have to be at the same level as you two. We can only speak for ourselves.”

CHRIS: “Tim will not be referred to as a sex offender, child molester, or any other words you choose to use just to keep the hurt going.”

SDIL: “Not words of my choosing, State of Michigan choose them, Tim choose them when he touched (REACTED). Sex Offender is the truth. He molested a child, even if he was a sleep, he still touched her.”

CHRIS: “Tim did not choose anything any more than you choose to be a bed wetter, It was a sleep disorder that was treated and boundaries were set up 16 years ago, they are not new. We will protect ourselves just as you need to protect your self and family.”

CHRIS: “Tim is not a man to be labeled from one terrible moment any more than you two should not be known for your worst moments.”

CHRIS: “And believe me we have them.”

SDIL: “Yes we do, this one is a big one, children are too weak to protect themselves from this alone.”

CHRIS: “And that is exactly why I have spent my life working to protect children.” 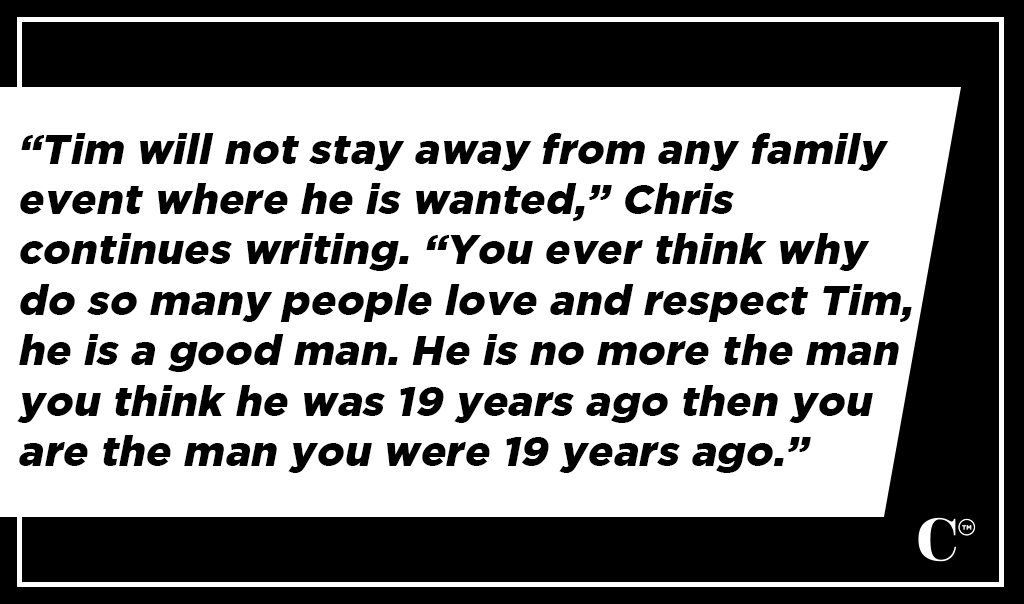 Still in another segment of the exchange, Chris lambasts her son and daughter-in-law, writing “…what the hell do you think Tim is going to do. Don’t you think you and (REDACTED) have the ability to watch your children, this is what you should do all the time. Shame on you for acting like Tim will jump out and hurt someone, you know better than that.”

“Tim will not stay away from any family event where he is wanted,” Chris continues writing. “You ever think why do so many people love and respect Tim, he is a good man. He is no more the man you think he was 19 years ago then you are the man you were 19 years ago.”

Examining these email exchanges, it’s evident they do not pertain to the accusations of Tim being present at Cozy Corner Child Care Center; however, it’s blatantly obvious that Chris does not seem to think the allegations against Tim from years ago involving her daughter are that big of a deal. In fact, she seems to brush them under the rug, lamenting how Tim is a good person, what he did is akin to a bed wetter, and that he couldn’t control it.

Where Do We Go From Here?

As we have documented, there has already been a large protest at Cozy Corner Child Care Center in an effort to get them shut down and, as aforementioned, the state is currently investigating them. What will happen as a result of that investigation remains to be seen, but we are sure this is not the last we will hear of Cozy Corner Child Care Center in the days and weeks to come.