The Defamation Circus: Top 10 Most Shocking Moments from Johnny Depp vs Amber Heard

With nothing but dark news dominating the cycle in recent months, it's no wonder people are turning into the shocking 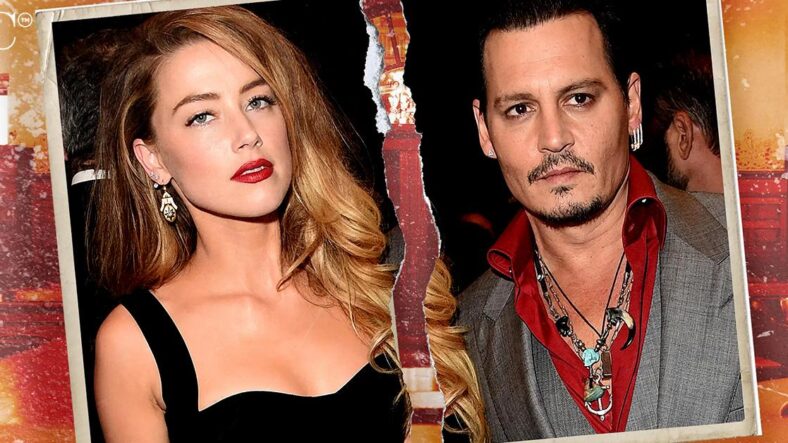 With nothing but dark news dominating the cycle in recent months, it's no wonder people are turning into the shocking defamation court case between Johnny Depp and ex-wife Amber Heard.

Although Depp's eccentricities and substance abuse were no secret, the extent to which their relationship was toxic and abusive has been dropping jaws around the world as more and more salacious details sneak out from testifying witnesses.

Overall, the court case is painting a picture of two deeply troubled people – both beset by mental health issues, one struggling with substance abuse disorder – who have absolutely no business being together. But day by day, more of their private life is being held under a microscope for the world to examine. Here's a look back at some of the moments that have caused the world to talk – and that both parties probably wish the world didn't know in grueling detail.

1. A Lawsuit Suit: One of the more bizarre moments came early in the lawsuit, when behavior analysts began questioning a quirk of Heard's. Heard kept showing up to court wearing exact copies of things Depp had worn, either recently in the court case or before during their time together. Speculation has been rampant about why she would do this. It could be a power move, reminding Depp that she's still a part of his life, and she's still playing mind games. Or it could be her way of reclaiming her own power. Which motive you ascribe to her actions probably depends on who you believe the aggressor was in their relationship, Heard or Depp.

2. Allergies, or…?: In another bizarre moment, eagle-eye trial watchers noticed Heard wiping her nose – weirdly. In a video shared widely online, Heard is seen lifting a tissue to her nose and ostensibly wiping it. But then, the actress pauses, presses her finger against the side of her nostril, and appears to pause for a sniff. This is a gesture reminiscent of how people snort cocaine, which has been the favorite rumor online.

Of course it's entirely possible she just had something in her nose, but the internet is having a field day with this, suggesting that Heard really does nothing normal.

3. A Lawyer Fist-Pump of Victory: One eye-opening moment wasn't from either Depp or Heard, but actually came from Depp's counsel. While lawyers generally keep their cool in court, Depp's counsel couldn't help but celebrate one key moment – when Heard mentioned model and Depp's ex, Kate Moss. Heard mentioned Moss because of an old rumor that he pushed the model down stairs – but she and Depp are in good standing, and whatever she says will likely be favorable in regards to Depp's behavior. Heard clearly mentioned her in an attempt to paint him as a serial abuser, but it may bite her in the end if Moss gets on the stand and tells a far different tale of Depp's relationship behavior than Heard expects. When Moss's name dropped from Heard's lips, Depp's lawyer fist-pumped in victory and immediately began planning to bring her to the stand. Moss will be testifying Wednesday.

4. Body Language Analysts Have a Field Day with Heard's Face: Although Heard has been looking a bit like a cool cucumber during most of the testimony, body language experts have come forward in droves to say the small movements on her face tell a completely different story. Instead of calm and collected, Heard is contemptuous and disgusted. At times, she's angry – and trying to control that anger.

It's an interesting analysis of someone who makes a career by getting people to believe her emotions are something other than they actually are – but the truth is written on her face.

5. Bloody Fingerpainting: Of course, Heard isn't the only one with boundary issues and mental health struggles. Depp has his own fair share of WTH moments in the trial as well. One came when it was revealed during Depp's testimony about the time Heard threw an alcohol bottle at him and the shattering of the bottle sliced off the tip of his finger. Depp admitted that he used his own blood from his freely bleeding injury to paint messages and words on the wall. That's completely normal, right?

6. I Got Your Crazy Right Here: Another moment where Depp seemed a little sus was when a video was played of an angry exchange between the former couple. Depp, furious at Heard, can be heard saying, "Want to see crazy, I'll give you [expletive] crazy. I got your crazy. All you're crazy."

7. Call, Tell Them a Woman is Abusing You: Back to Heard's transgressions. At one point, in an audio recording, Heard can be heard taunting Depp, telling him to report that she's abusing him – because no one will believe him. This unfortunately strikes at the heart of a lot of domestic violence cases, because of the mistaken perception that men cannot be abused, only the abusers. It's unknown exactly how many cases of domestic violence against men go unreported, but Heard saying the quiet part out loud highlights why so many men hesitate to go forward. After all, who would believe that demure, delicate Amber Heard would be abusing drug-and-alcohol-abusing bad boy Depp? The good news for Depp is – almost everyone, now.

8. I Have Assaulted a Couch or Two, Yes: It hasn't all been doom and gloom and uncomfortable toxic moments. There has been some levity, much of it from Depp when he was on the stand. Depp tends to be one of those people who deflects with humor when he's uncomfortable, and this was on fully display during one particular questioning. When Heard's lawyer cross-examined Depp, he clarified that Depp had a reputation for trashing hotels during his bad boy rock star actor days. Depp quipped, "Correct. I have assaulted a couch or two. Yes, sir." It was a clever comment – eliciting empathy from people watching through humor, and reminding them that there are far worse things to take out your bad behavior on than couches.

9. Sh–ing the Bed, Literally: You can't talk about the Heard/Depp cause without talking about the elephant in the bed: Heard took a dump in their shared bed. While Heard was out of their shared penthouse, attending Coachella, Depp intended to pack his things and go before she could return home and a fight could ensue. But his bodyguard stopped him and warned him that there was poop in the bed. Heard tried to blame their small dogs, but apparently there was no mistaking whose poop it was.

10. A Reputation Too Bad Even for Captain Jack Sparrow: What it all boils down to is the overall perception that the op-ed Heard wrote about Depp (without naming him directly) painted him as a man with a reputation too bad even for the notorious Captain Jack Sparrow. The way Heard portrayed Depp in her editorial painted him as an abuse, erratic, addicted problem of a partner. Depp believes it was solely due to her allegations in the editorial and the immediate perception that her words were gospel that caused his career to tank, losing him parts such as Captain Jack, a role which he was reportedly tiring of but still determined to give a good send-off to. Throughout the testimony, Heard and her witnesses have tried to paint him as unbalanced, an addict who is not in control of himself when the drugs are.

Unfortunately for Heard, Depp's witnesses have been extraordinarily convincing. And although she taped a lot of their exchanges and thought it would look good to play them in court, in the court of public opinion the opposite has happened.

Instead of eliciting sympathy for Heard, it's making her seem cold, calculated, and controlling. After all, who regularly records themselves fighting with a partner – especially if she's taunting him? It's possible she's just that lacking in self-awareness.

The are still many days of testimony ahead. All in all, the trial is expected to last around 6 weeks. While there have been some serious WTH moments so far, there's surely more to come – especially once Moss is on the stand this week.