This season of The Real Housewives of Beverly Hills has largely revolved around a very shocking story. Specifically, that story is that Brandi

This season of The Real Housewives of Beverly Hills has largely revolved around a very shocking story. Specifically, that story is that Brandi Glanville claimed she slept with Denise Richards. When confronted with the allegation, Richards vehemently denied that anything happened between the pair. However, Glanville has held steadfast to her claim that they slept together.

Richards has also denied talking to Glanville extensively. We recently revealed text messages Denise and Brandi exchanged, proving that they communicated more than Richards seemed to let on. More text messages also recently surfaced, and it’s evident from them that the pair had communicated for quite some time.

While fans of the show have debated online whose side they are on, we exclusively caught up with Charlie Sheen’s ex-fiance, Brett Rossi. As fans of Richards’s know, she was married to (and had kids with) Sheen in the past. When talking with Rossi she shared that she absolutely believes Glanville’s story (and has a very interesting reason why). She also revealed her own horrific tales to share regarding Richards.

What’s more, is that Rossi believes Richards may have even wanted a three-way relationship (also known as a “thruple”) with her and Sheen.

When we asked Rossi if she believes Glanville’s claims about sleeping with Richards, she told us that “I absolutely believe Brandi.”

And what made Rossi so certain?

Rossi explained that “I know this because I’ve seen photos of Denise sleeping with another woman, so I know Denise likes women as well as men.” 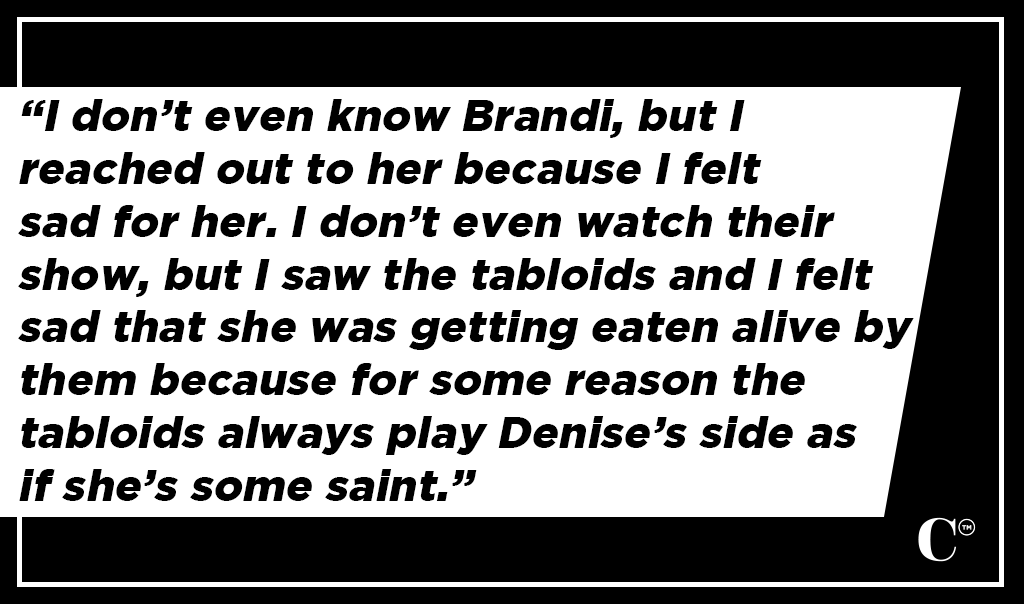 “Why she would lie?” Rossi continued explaining about Glanville’s allegations. “I feel like maybe Denise feels like being bisexual or having some sort of open relationship would tarnish her ‘good girl/saint’ image she’s worked all these years to create.”

“Denise is a bully,” Rossi added. “I don’t even know Brandi. I don’t even watch their show, but I saw the tabloids and I felt sad that she was getting eaten alive by them because for some reason the tabloids always play Denise’s side as if she’s some saint.”

Rossi still had more to share, stating that “It’s not fair. When my ex and I were engaged and all those stories came out saying that I was forcing Charlie to kick Denise and the girls out (which was totally false and not my choice). Not ONE tabloid tried to contact me and get my side of the story. Not one. They just trashed me because I’m an ex-pornstar and it’s easy to trash an ex-pornstar.”

“So I have a soft spot for Brandi,” Rossi also told CELEB, “because I totally believe her story. I truly do. I think she really must have loved Denise and Denise showed her true colors.”

Rossi had a LOT more to share regarding Richards. She understandably had many experiences with her when she was engaged to Sheen…and from the sounds of it, not many of them were positive.

“Amongst her feeding Charlie drugs while we were together,” Rossi began detailing to CELEB of her issues with Richards, “calling me a controlling b—ch because I wanted Charlie clean and allowing the drug dealer inside the community (I have receipts)… She went to such great lengths to make me absolutely miserable.”

“Then, one time,” Rossi then stated, “she hired a hooker that Charlie once had a crush on. He had a crush on this chick prior to our relationship, but the chick was super money grubby so she never saw Charlie. So Denise HIRED this chick. Took photos of them having sex and ‘accidentally’ sent them to Charlie knowing damn well I would find out. Her excuse? ‘Oh sorry – I meant to send those photos to someone else.’

Rossi had more to share on the drug-dealer, telling CELEB that “While Charlie and I were together, I BANNED the drug dealer- who goes by the name Marco– from coming to our house and even the gate [from] letting him in.”

“So what did he do?” Rossi continued detailing. “He had Denise let him in. And yes, I have those emails too.”

Here are the emails and records Rossi shared with us regarding Richards letting Marco in:

“Brooke Mueller [Sheen’s ex-wife] told me while Charlie and Brooke were engaged, Denise even wrote Charlie a letter begging him to leave Brooke and get back with her,” Rossi then continued sharing with CELEB about Richards.

And what does Rossi believe Richards’s main issue with her was?

“Denise didn’t like me because I didn’t want to have a creepy three-some relationship with her and Charlie,” Rossi shockingly shared, which will only certainly add fuel to the fire regarding the conversations surrounding Glanville and Richards.

“I’m not entirely sure she wanted a three-way relationship with me and him,” Rossi added, “but she did send those photos and she did bully the hell out of me.”

Rossi went on to detail how manipulative she felt Richards can be, citing a specific example.

“Denise HATED me the entire relationship,” Rossi dished to CELEB, “but the moment I got a restraining order against Charlie, guess who texted me to see if I was okay? Denise.” 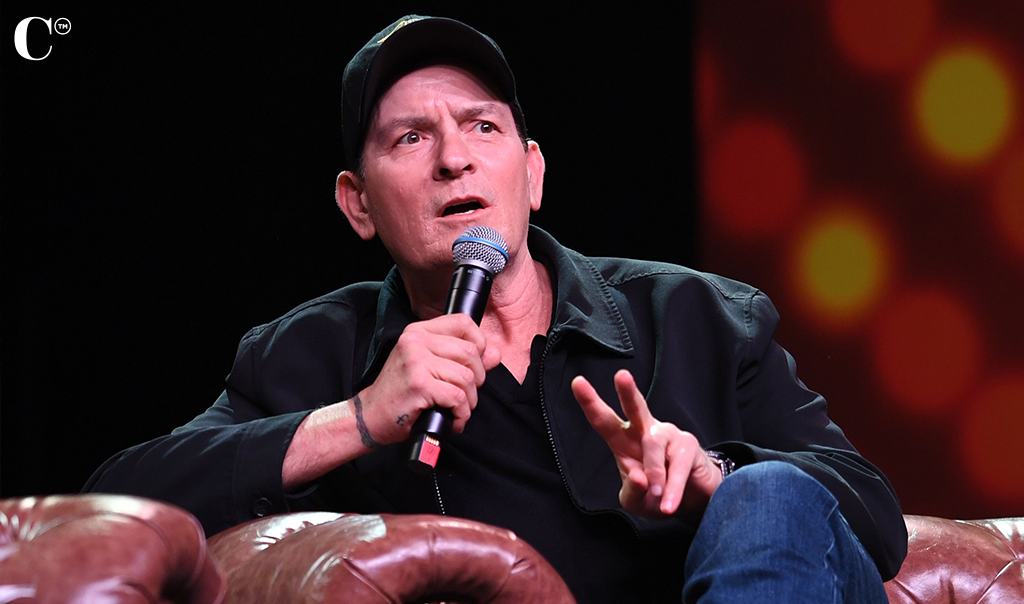 “She also told Charlie I ‘faked cancer and nursing school’ which I have proof neither was a lie,” Rossi continued. “She also told him I had a ‘secret boyfriend’ while we were engaged. I was absolutely head over heels for Charlie AND he was extremely controlling so how the hell would I have gotten away with cheating on him and the tabloids not finding out?”

“You want to know the real reason Denise had the media trash me while I was engaged to Charlie?” Rossi then told CELEB. “Because, when Charlie and I first started dating, Denise would walk into the house unannounced. And one time, Charlie and I were sleeping and she walked into our BEDROOM! Totally unannounced. Without the kids.”

“She always would come over WITHOUT the kids,” Rossi elaborated. “So I finally told Charlie that if he wanted a normal relationship with me, he had to put some boundaries on Denise. So he politely did.”

“What did she do?” Rossi then shared. “Flip the f—k out and then she held the kids over his head and made our relationship a living nightmare.”

Rossi then explained that she tried to make peace with Richards for the sake of Sheen (and their kids), but Richards wasn’t having it.

“So one time,” Rossi detailed, “I went over to her house to make peace while Charlie and I were engaged. I wanted to mend the bridge like I did with him and Brooke. I told her ‘we all need to get along because I’m marrying Charlie whether you like it or not.’ Her response? ‘We’ll see about that!’”

Rossi then shared a text message Richards sent from her daughter’s cell phone (as Rossi stated Sheen had blocked Richards from texting him):

Rossi then detailed her relationship with Sheen and Richards’s children, as she stated that “I would always remember the girls on holidays. I made them Easter baskets, I made them birthday gifts, etc. Denise NEVER thanked me.”

Denise Was There At The End

While Rossi did love Sheen, their relationship did ultimately come to an end. Rossi explained to CELEB that, even as things between her and Sheen were falling apart, Richards was trying to intervene. 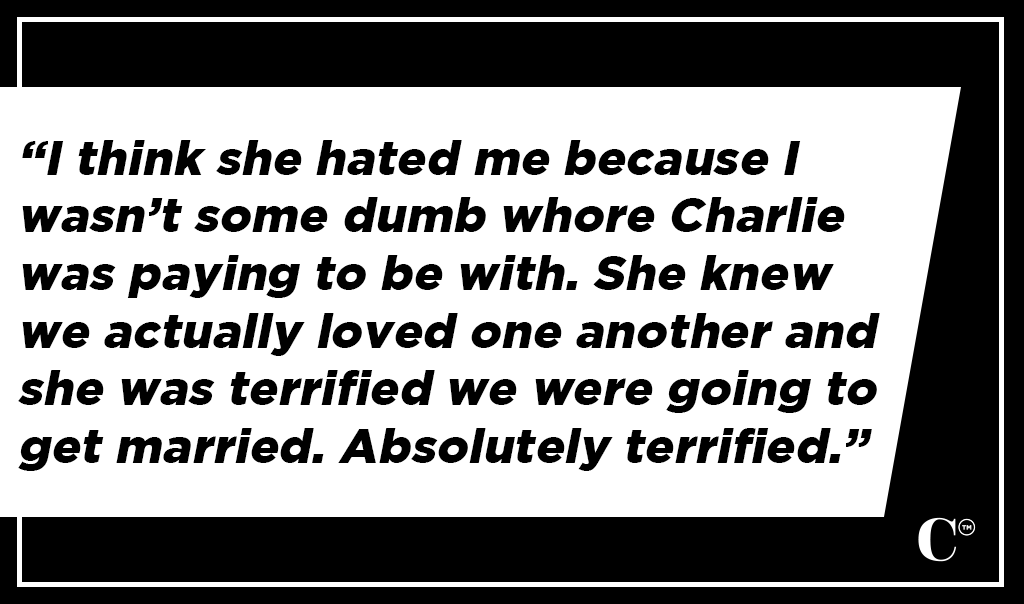 Rossi shared that “Towards the end- when Charlie and I were having problems- I went to Virginia to visit a lifelong best friend. When I came home, Denise left a bunch of s—t at the house. I KNEW my relationship with Charlie was over at that point. I knew she had gotten inside his head. She held the kids over his head the entire time we were engaged.”

“What’s so funny is, if I was so horrible, how come I got him and Brooke to get along and be friends again?” Rossi then asked.

“I threw the boys [Charlie and Brooke’s sons] a huge birthday party,” Rossi then noted. “I invited the girls and Denise refused to drop them off. She demanded she be around constantly. I even made Charlie hire a family law attorney to fight her for visitation of the kids without her present.”

“I think she hated me because I wasn’t some dumb whore Charlie was paying to be with,” Rossi then shared of why she thinks Richards had such a major issue with her. “She knew we actually loved one another and she was terrified we were going to get married. Absolutely terrified.”

Even though her relationship with Sheen has been over for quite some time, Rossi reflected on what she truly wanted for him.

“I wanted Charlie’s life to be better,” Rossi explained. “I tried my hardest. But the media made me out to be this horrible person because Denise was leaking all this s—t info about me.”

“I am happy to throw her under the bus for everything she did to me,” Rossi wrapped with telling CELEB, “and she knows this is all true. Karma is a real b—ch.”