Denise Richards Served Brandi Glanville A Cease And Desist – Here It Is In Full! 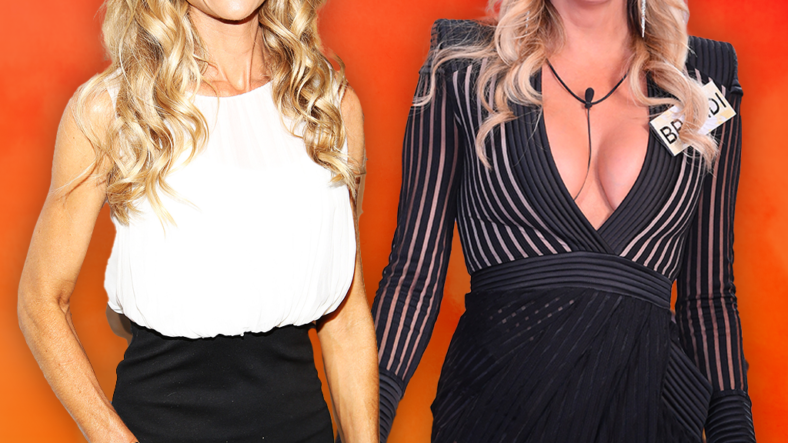 This season of The Real Housewives of Beverly Hills has largely focused on an alleged affair between Brandi Glanville and Denise Richards. On this past week’s season finale, Richards goes over to cast member Lisa Rinna’s house to talk (after the finale episode had taped). In their conversation- which turns south relatively quickly- a cease and desist letter is brought up.

CELEB has exclusively obtained the cease and desist letter that Rinna was referring to- and it’s pretty juicy!

“What’s going on here?” Rinna asks, noting that “it’s not my business.”

“There is nothing going on here,” Richards responds. “Why don’t you believe me?”

“I don’t know what exactly- what I believe to be really honest with you,” Rinna answers.

Rinna goes on to note that “I witnessed something that really confused me. You have had a long relationship with Brandi Glanville. Platonically or whatever because you have a very long text message chain with her, Denise. Cause it’s you.”

“I don’t care what texts she has,” Richards pipes in with.

“My interaction with her was very limited,” Richards insists to Rinna, while Rinna states “this is a friendship” referring to the fact that she firmly believes Glanville and Richards were friends.

In her confessional, Richards states that “there is an app that can revise text messages, so whatever Brandi has, I don’t even care.”

“I’ve seen her four times in my life,” Richards goes on to tell Rinna. “She was an acquaintance. That was it.”

“I don’t buy that,” Rinna then states.

Rinna then asks Richards “Have you talked to Brandi?”

“No I have not,” Richards answers.

Rinna does not stop there, though, saying “Alright, let me ask you a question- and this is none of my f—king business, by the way- but we don’t understand why you wouldn’t pick up the phone and say what the f—k are you doing?”

“Why would I engage in that?” Richards asks Rinna.

“So do you just not engage with it?” Rinna then inquires of Richards. “Is that how it goes away?”

“No, there was other things that I dealt with,” Richards explains. “I don’t even want to say how it was dealt with, but- it’s being dealt with.”

“So you sent a cease and desist?” Rinna then asks.

“You wanted the footage taken out,” Rinna continues, referring to the footage on the show mentioning the alleged affair.

“No, you are playing dirty,” Richards tells her. “Like this is slanderous. If something was slanderous about you, wouldn’t you send a cease and desist?”

Here is the full clip of their interaction:

As aforementioned, we have obtained the full cease and desist from a production source that Glanville was served with from an attorney representing Richards.

As can be seen above, the first page notes that “This firm acts as litigation counsel for Denise Richards. We understand, based on first hand sources, that you have been spreading false and disparaging allegations regarding Ms. Richards with respect to Season Ten of The Real Housewives of Beverly Hills (the ‘Program’).”

The letter goes not o note that “It is hereby demanded that you immediately cease and desist from spreading these defamatory claims, and explain to cast members of the Program who witnessed these claims that your previous defamatory statements were untrue. Should you refuse to do so, you will stand exposed to significant liability, as discussed below.”

This particular paragraph above is interesting, as the letter is demanding Glanville go back and tell other cast members that the things she said about Richards were untrue. Glanville, for her part, has continued to assert that everything she said about the alleged affair was true, so it’s clear she was not going to curtail and do this.

The letter then goes on to explain what defamation is, noting that “false accusations are defamatory.”

The second page of the letter, as seen above, then gets into what Richards’s issue is with the “defamatory statements.”

“Your defamatory statements are extremely damaging to Ms. Richards’ reputation both as a loyal spouse and devoted mother, as well as a diligent, hard-working, and reliable actor,” the letter states. “Should you fail to abide by this cease and desist demand, Ms. Richards will hold you responsible for your false and reckless statements.”

The letter then goes on to give examples of bigger names/celebrities that have won defamation suits, including Joe Francis vs. Steve Wynn and Dennis Hopper vs. Rip Torn.

“Moreover, any false and defamatory claims of a highly personal and private nature expose you to additional claims,” the letter later notes, going on to add that “Sensational claims of a highly speculative nature concerning Ms. Richards’ private life serve no legitimate public concern and constitute a tort in the State of California.”

The letter also highlights some of the bigger cases related to “false and defamatory claims of a highly personal and private nature,” referencing (as one example) Bret Michaels and Pamela Anderson’s lawsuit regarding a sex tape of them leaking. 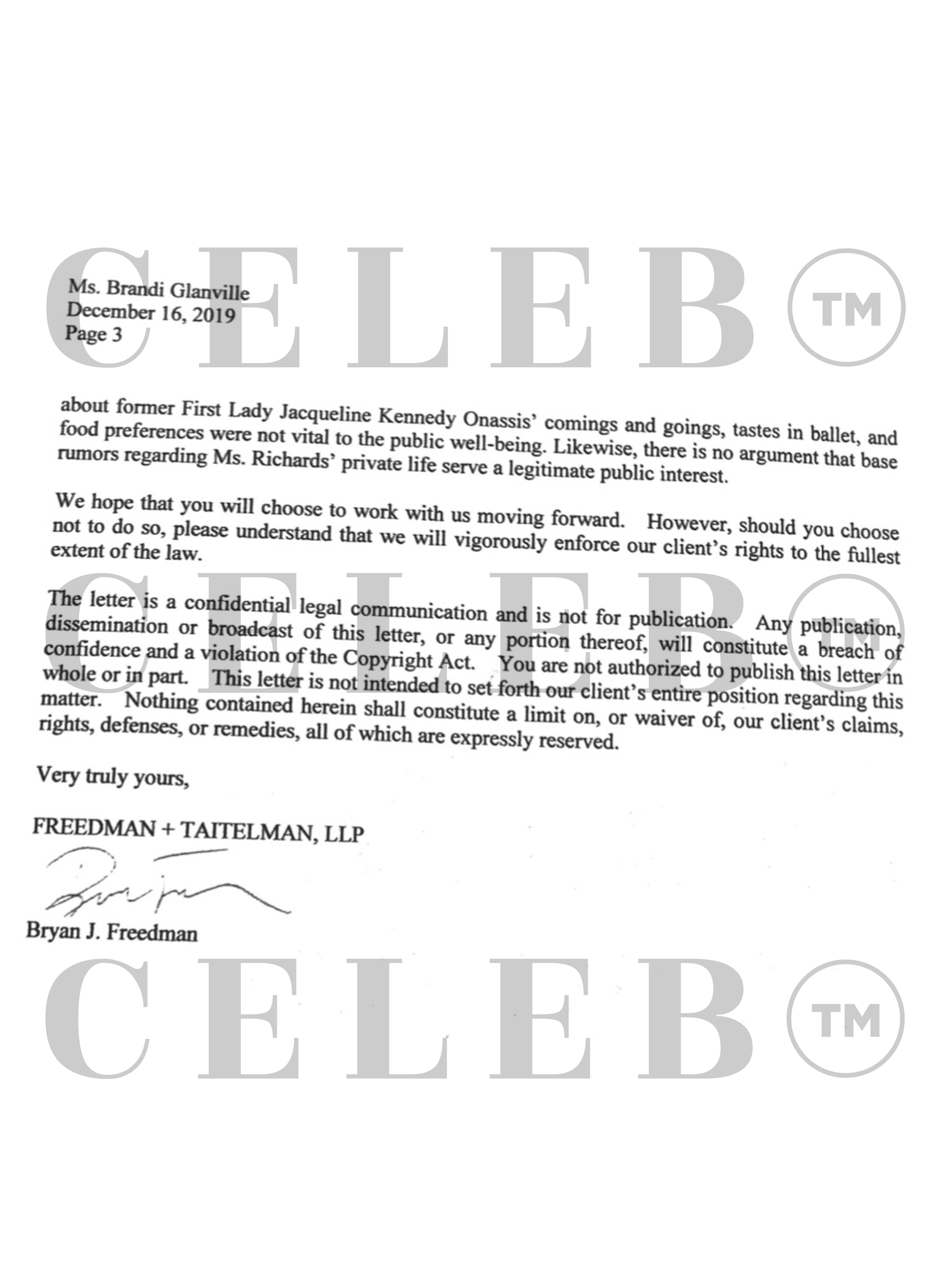 On the final page of the letter, which can be seen above, it notes that “We hope that you will choose to work with us moving forward. However, should you choose not to do so, please understand that we will vigorously enforce our client’s right to the fullest extent of the law.”

Glanville spoke out on her Podcast Brandi Glanville Unfilterd this week to address the claims Richards made about “an app that could revise text messages.”

“Everyone believes me because I’m telling the truth,” Glanville shared.

Glanville then specifically addressed the revising text message app accusation, stating that “Denise was saying there’s this app  but anyone who knows me knows I can barely use my iPhone. And she’s saying she’ll show her texts… Please do share all of your texts. Expose them.”

Glanville also addressed her hopes to still sit down with Richards- even though she was not present at the reunion, which we had exclusively reported on before.

“I want to sit down with her,” Glanville reiterated, “and I know if I went to the reunion she wouldn’t have gone, it’s virtual so you can just leave.”