Today, a source spoke to US Magazine regarding the claims that Rossi had made to CELEB, and now we have another explosive statement from Rossi- and she is not backing down from what she said.

“Denise didn’t send any photos like the ones Brett is describing,” the insider continued telling US. ”Never. People like Brett are jumping on the coattails of a very popular show and trying to get their name out there.”

The source also claimed the only time Richards ever texted Rossi was “about Charlie as a dad and keeping a relationship with his daughters,” noting that Richards “didn’t want anything to affect their kids.” 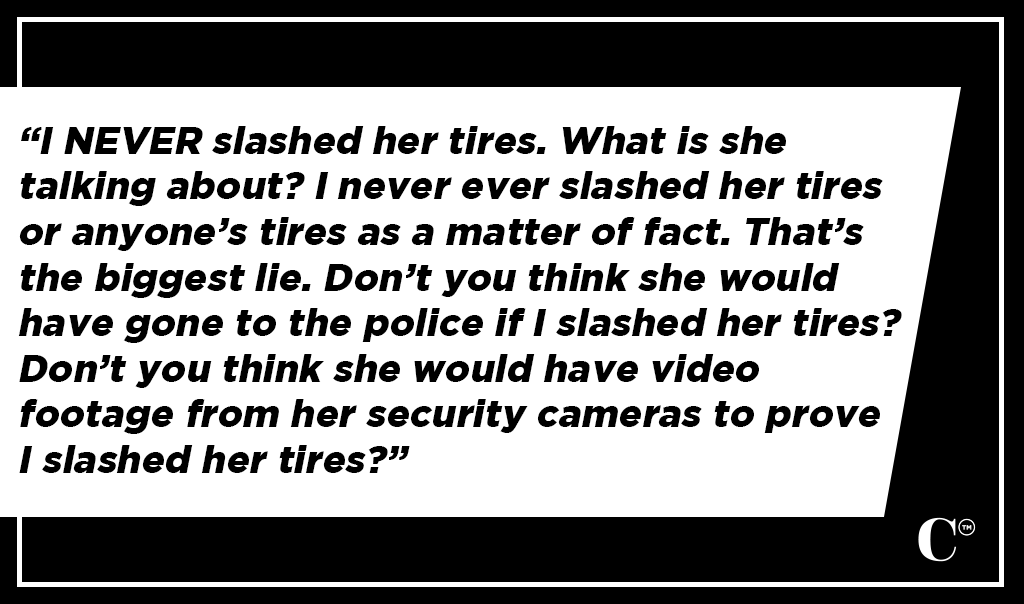 “Denise had minimal contact with her,” US’s insider added.

US’s source also made a very strong allegation against Rossi, alleging that “Brett slashed Denise’s tires twice. At one point, Brett wanted to take a baseball bat to Denise’s house and smash Denise in the head with it. Charlie had to physically stop her.”

CELEB reached out to Rossi regarding the new claims, and she answered each one, point-by-point.

Rossi began with telling us that, “I see today that Denise- err, sorry, a ‘source’- decided to speak out and make the following claims against me:

– I slashed her tires

– I wanted to take a baseball bat to her house and smash her in the head with it, but Charlie had to stop me

– I was threatened and jealous of the relationship with Charlie’s daughters that Denise was allegedly trying to build.”

“Allow me to discuss each of these points, as they’re pure and utter bulls—t AKA more lies from Denise,” Rossi elaborated. 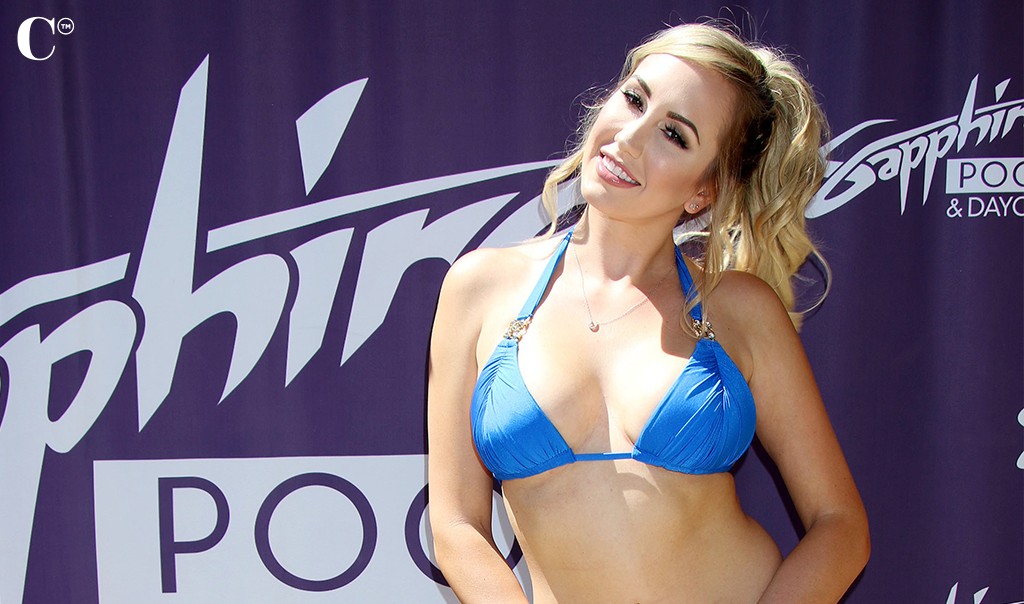 “And I wanted to take a baseball bat to her house to hit her?” Rossi continued. “LMAO. Girl, please. Anyone that knows me knows I hate confrontation and always want peace and am the farthest thing from a fighter there is. This claim is a- very lame, might I add- attempt to disparage the stories I shared about you the other day because you know they’re ALL TRUE. Just like you know what Brandi Glanville is saying IS TRUE.” 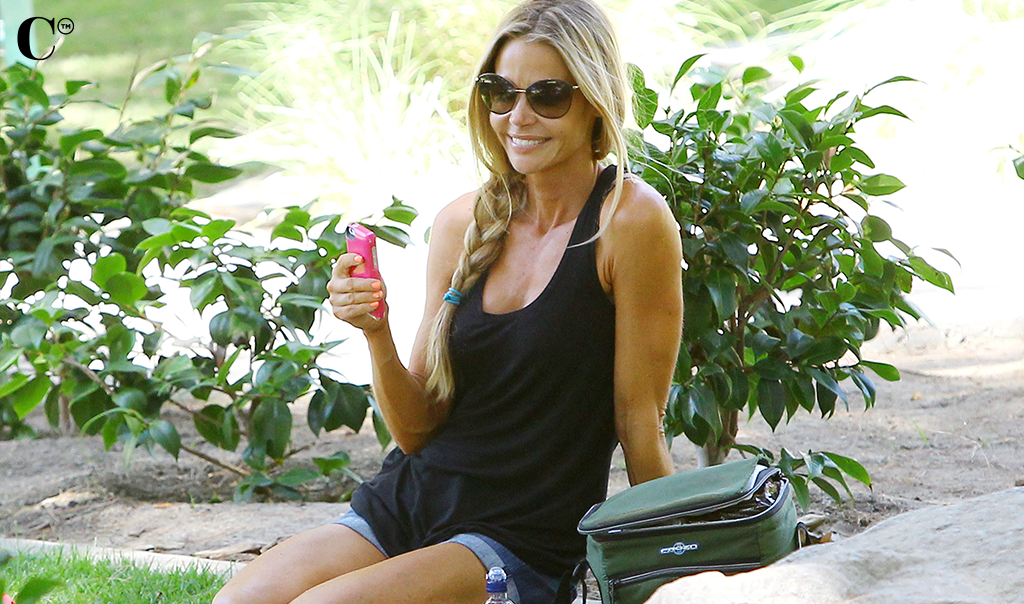 “I also specifically said that I saw photos of her having sex with another female that she accidentally sent Charlie and I while Charlie and I were together,” Rossi reiterated, standing by what she initially told CELEB. “We both know this was not an accident at all.”

“For what it’s worth,” Rossi added, “note that Denise- sorry, the ‘source’- made no attempt to discuss her bringing a drug dealer onto the property, her showing up unannounced, and more.”

Rossi also addressed another claim in the US Magazine story, specifically regarding her wanting to ride Richards’s coattails due to her being on a popular show. 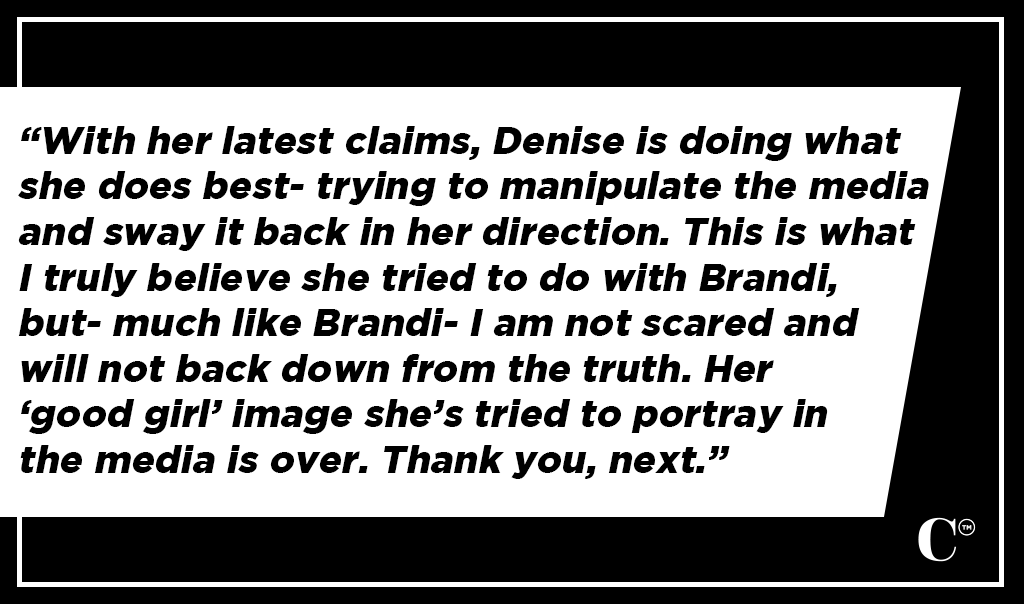 To this, Rossi told CELEB that “As far as the ‘source’ claiming I’m trying to ride on Denise’s coattails due to her being on a popular show? What coattails? She’s on a washed-up show, has a husband without a job and she’s literally my moms age and bullies someone that could be her daughter. Facts are facts as bitter as the pill may be to swallow, Denise.”

“With her latest claims, Denise is doing what she does best- trying to manipulate the media and sway it back in her direction,” Rossi wrapped with telling CELEB. “This is what I truly believe she tried to do with Brandi, but- much like Brandi- I am not scared and will not back down from the truth. Her ‘good girl’ image she’s tried to portray in the media is over. Thank you, next.”

‘Shut Up Denise! You Lie!’ RHOBH Season 10 Reunion Will Bring It