Get ready, you guys, because the Zed and Addison are about to be back and better than ever! That’s right, 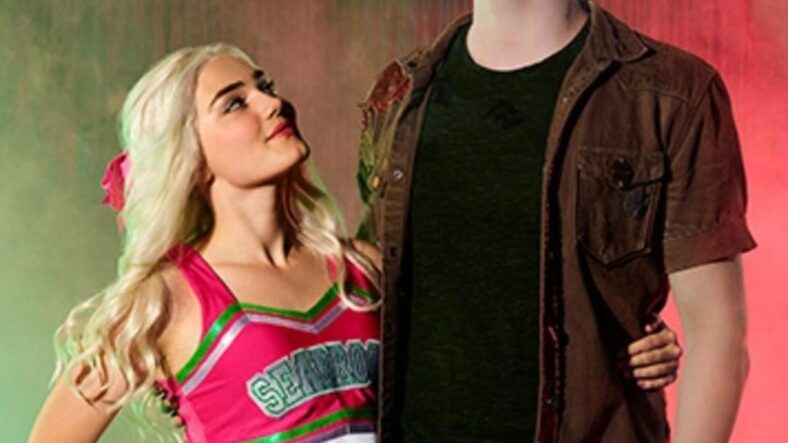 Get ready, you guys, because the Zed and Addison are about to be back and better than ever! That’s right, Disney Channel just announced that Zombies 3 is officially in the works, and we couldn’t be more excited.

“After the enormous success of Zombies 2, we wanted to raise the stakes in this third and final installment,” Vice President of Original Movies for Disney Branded Television, Lauren Kisilevsky, said in a statement. “So when the ultimate outsiders descend on Seabrook, our team of cheerleaders, zombies and werewolves must band together to face a threat of galactic proportions that may change the face of Seabrook forever.”

But wait, when will it come out, you ask? Will all of the OG stars return for the third flick? Has anyone new been cast in it? And what’s going to go down in it? Not to worry, you guys, because we broke it all down for you. Here’s everything you need to know about the upcoming movie…

What Will ‘Zombies 3’ Be About?

According to JustJaredJr, in Zombies 3, “Zed and Addison are beginning their final year at Seabrook High in the town that’s become a safe haven for monsters and humans alike. Zed is anticipating an athletic scholarship that will make him the first Zombie to attend college, while Addison is gearing up for Seabrook’s first international cheer-off competition. Then suddenly, extraterrestrial beings appear around Seabrook, provoking something other than friendly competition.”

Wow, sounds intense! The official Zombies Instagram account even posted a teaser, which they captioned, “The zoms, poms and werewolves are about to team up to face a threat of galactic proportions. Are you ready for #Zombies3?!”

Will The Original Cast Members Return For The New Movie?

When the news hit the web, everyone quickly started to wonder — will all of the OG stars return for the third movie? Well, not to worry, you guys, because Milo Manheim confirmed that he was coming back when he reposted the announcement to Instagram, captioning it, “Here we GOOOOOO!”

Meg Donnelly also revealed that she was reprising her role.

“‘Zombies 3!’ I am pinching myself! ! can’t wait to go to the six and do this all over again with the people I love most!” she wrote, alongside a slideshow of photos from on set of the first two movies. “Enjoy these few memories!”

When Will It Come Out? 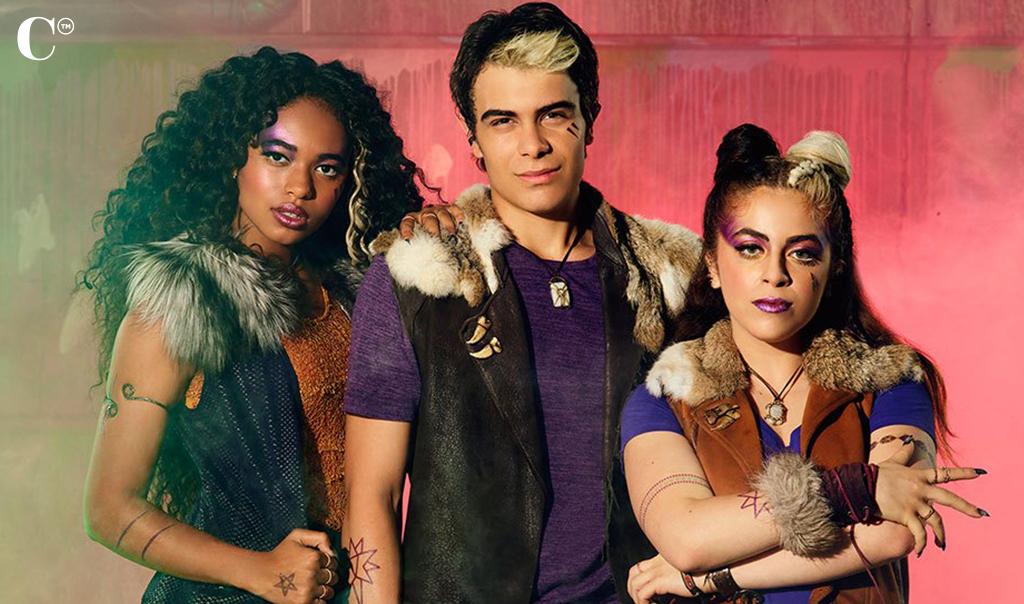 So unfortunately, there’s no release date for it just yet, but production is set to kick off in Toronto this spring! Oh, and did we mention that Paul Hoen will return to direct the new flick? For those who forgot, he directed the first two movies, as well as Camp Rock 2, The Luck of the Irish, Jump In! and more.

What Else Do We Know About ‘Zombies 3?’ 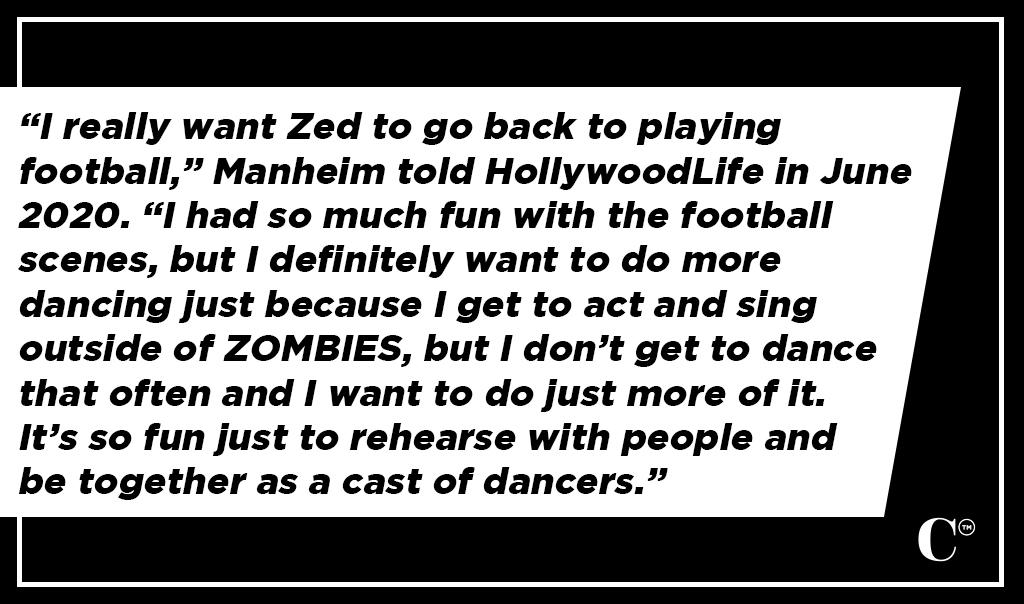 Luckily for us, some of the cast has already spilled some tea on what they went to see happen in the third movie.

“I really want Zed to go back to playing football,” Manheim told HollywoodLife in June 2020. “I had so much fun with the football scenes, but I definitely want to do more dancing just because I get to act and sing outside of ZOMBIES, but I don’t get to dance that often and I want to do just more of it. It’s so fun just to rehearse with people and be together as a cast of dancers.”

As for Donnelly, she wants a big musical number for her character, Addison, and Zed.

“I really want [them] to have like a ‘Singin’ in the Rain’ moment where they have a five-minute dance break in the rain,” she gushed to Fansided in March 2020.

We can’t wait to see what goes down!

What Other Disney Movies Do We Have To Look Forward To? 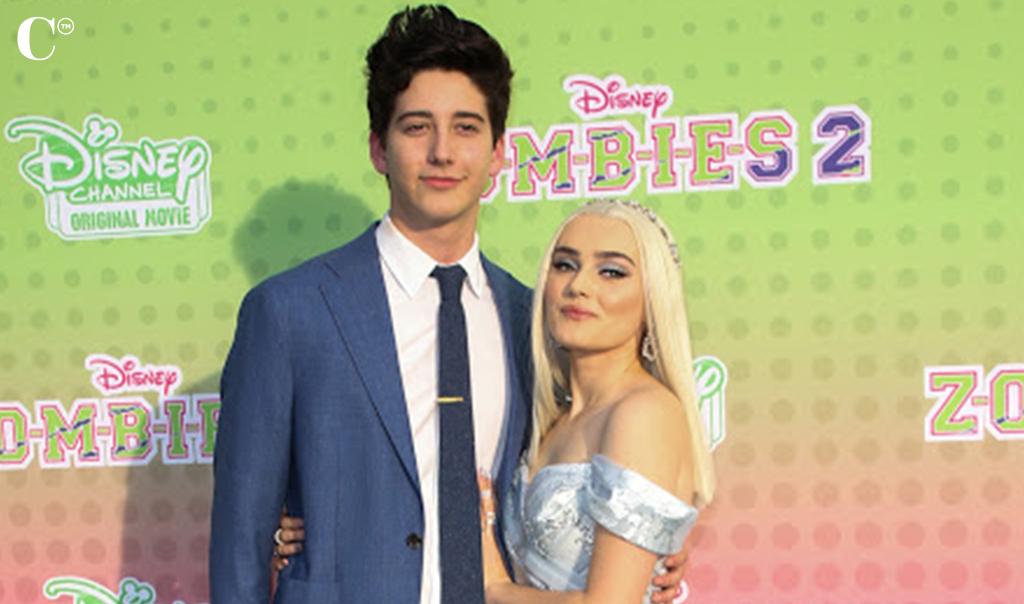 Disney Channel also has a brand new movie movie in the works called Spin. It follows “an Indian American teen who discovers her artistic side through the unique world of DJ culture and learns she has a passion for creating mixes that blend the textures of her Indian heritage and the world around her.”

Plus, there’s also a remake of the horror movie Under Wraps set to his the channel sometime this year, and we can’t wait! It “takes place a few days before Halloween when 12-year-old friends Gilbert, Marshall and Amy accidentally revive a mummy they discover in a neighbor’s basement, which they affectionately name Harold. However, they must rush to return him to his resting place before midnight on Halloween. Along the way, the team narrowly escapes a nefarious group of criminals intent on selling the mummy to the highest bidder. When Harold is inevitably captured, Marshall, Gilbert and Amy must band together to stand up to the criminals, face their fears and rescue their new—but rather ‘ancient’ — friend.”

And that’s not all. It was announced last week that the the Descendants cast is reprising their characters for a brand new animated special, called The Royal Wedding! The exciting news comes almost two years after the third and final movie from the series came out, and we are so happy that the characters will be back on our screens once again!

According to Variety, the special will feature Mal and King Ben’s royal wedding. Dove Cameron is going to return as Mal, Sofia Carson will return as Evie and Booboo Stewart is set to return as Jay. Plus, Mitchell Hope, Sarah Jeffery, Melanie Paxson, China Anne McClain, Jedidiah Goodacre, Anna Cathcart, Dan Payne, Bobby Moynihan and Cheyenne Jackson will all also reprise their roles.

But what about Boyce’s character, Carlos de Vil, you ask? As fans know, the actor sadly passed away after suffering from a seizure in his sleep on July 6, 2019  — just one month before the third movie premiered.

“The absence of Carlos’ character will be acknowledged in the storyline and Boyce’s memory will be honored in the telecast,” the outlet reported.