Things are heating up in the cold war between Donald Trump and Ron DeSantis. Twice-impeached Trump has announced plans to 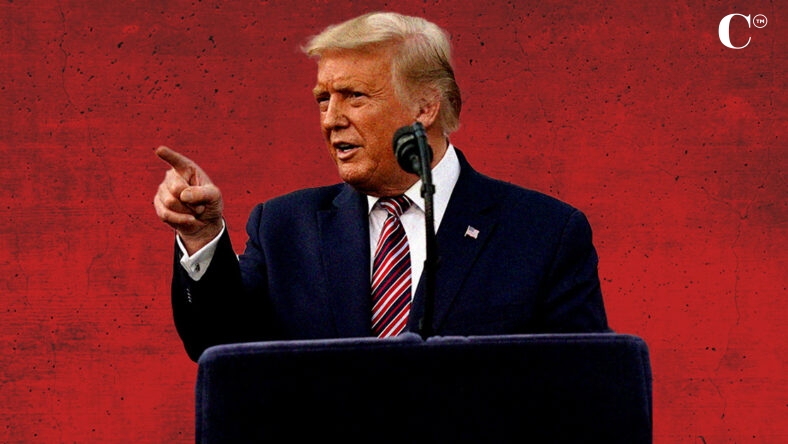 Things are heating up in the cold war between Donald Trump and Ron DeSantis.

Twice-impeached Trump has announced plans to run for President for a third time in 2024, and he’s eyeing his greatest competitor, DeSantis.

DeSantis coasted to an easy landslide victory over Charlie Crist to retain the governorship of the Sunshine State, cementing his popularity among conservatives by also earning a red supermajority in the once-purple state.

But Trump is under investigation, under pressure and facing an exodus of support.

So he’s doing what he does best, and taking aim at DeSantis. Publicly, the two are simply eyeing each other warily. But behind closed doors, neither one is holding back.

In the past, Trump has taken aim at DeSantis before.

Not only has he called his popularity among conservatives into question, but he’s more than hinted that DeSantis owes him for his surprise 2018 win.

Recently, Trump suggested that he sent law enforcement agents into Broward County in 2018 and stopped the election from being stolen from DeSantis – a point which Broward County officials dispute.

But now he’s taking aim at DeSantis’s handling of the COVID 19 pandemic in Florida, and it’s clear that the FPOTUS is not reading the room.

Because if he did, he would realize that DeSantis’s handling of the pandemic is seen as gold-star conservatism and has been hailed as the right way to guide a red state through pandemic waters.

Business Insider writes, “Trump made the comment in a statement provided to Insider and a series of Truth Social posts in which he raged against DeSantis and the news media. The statement came after some Republicans blamed Trump for the GOP’s disappointing midterms performance, although DeSantis easily coasted to reelection.

‘NewsCorp, which is Fox, the Wall Street Journal, and the no longer great New York Post (bring back Col!), is all in for Governor Ron DeSanctimonious,’ Trump began, using a nickname for the governor he first debuted publicly on Saturday, ‘an average REPUBLICAN Governor with great Public Relations, who didn’t have to close up his State, but did, unlike other Republican Governors, whose overall numbers for a Republican, were just average—middle of the pack—including COVID, and who has the advantage of SUNSHINE, where people from badly run States up North would go no matter who the Governor was, just like I did!'”

But DeSantis only closed Florida down briefly, and strategically – and quickly opened things up again. Even when school districts fought back, DeSantis demanded that they re-open fully.

While it caused a staggeringly high death toll, it kept Florida’s economy steady – the goal for conservative leadership through the uncertainty of the pandemic.

And Trump’s inability to acknowledge DeSantis’s popularity on at least this issue shows that he’s desperate to turn the tide of opinion back in his favor, but incapable of understanding what drives conservatives.

Ahead of 2016 and 2020, he rose to prominence by harnessing anger, a feeling of being unheard, and conservative ennui about being left out of a too-rapidly progressing society.

Now, however, a walloping loss in the midterms for Trump’s candidates shows that he may be the past of the Republican party, and that like it or not the change-resistant Republicans will need to adjust their tactics moving forward.

And DeSantis is exactly the kind of aggressive forward-thinker to do that.

The Weird Cold War Between Donald Trump and Ron DeSantis

The bitter back-and-forth between the pair has culminated in this weird cold war standoff that hasn’t yet devolved into open bickering, but that doesn’t mean that both men are holding back their thoughts on one another.

Trump, of course, has already tagged DeSantis with his favorite (a nickname) of “Ron DeSanctimonious” and keeps trying to convince people that DeSantis doesn’t stand a chance without him.

DeSantis, famous for grinding his teeth when frustrated, is gritting his way through public peace with the former President while raging behind closed doors.

Back in October, a friend of Trump told Vanity Fair, “Trump says (DeSantis) is overrated, disloyal, and a know-nothing.”

And DeSantis responded privately that Trump is “a moron who has no business running for President.”

Benzinga writes, “Although the two haven’t spoken since the summer, according to the report, insulting each other surreptitiously appears to be a warm-up exercise. DeSantis already has a plan in place for how to deal with the former president if the two were to face off in a debate.

‘The only way to beat Trump is to attack him head-on,’ said DeSantis, according to a Republican source who spoke to Vanity Fair. “He says he would turn to Trump during a debate and say, ‘Why didn’t you fire Fauci? You said you would build the wall, but there is no wall. Why is that?’”

When the 2024 cycle heats up in earnest, DeSantis will have to make some big decisions.

He has three choices:

Now that Republicans have placed the blame for a lackluster midterms showing squarely on Trump’s shoulders, DeSantis has the chance to become the party’s savior and rescue it from the MAGA weight pulling it down.

Then again, if he waits until 2028 he doesn’t have to worry about a MAGA target on his back.

Time will tell what the Florida Governor chooses to do. But for now, it’s all audible tooth-grinding in public and rages in private.