Former President Donald Trump is inarguably one of the most popular Republican candidates in modern times. Heading into 2024, he 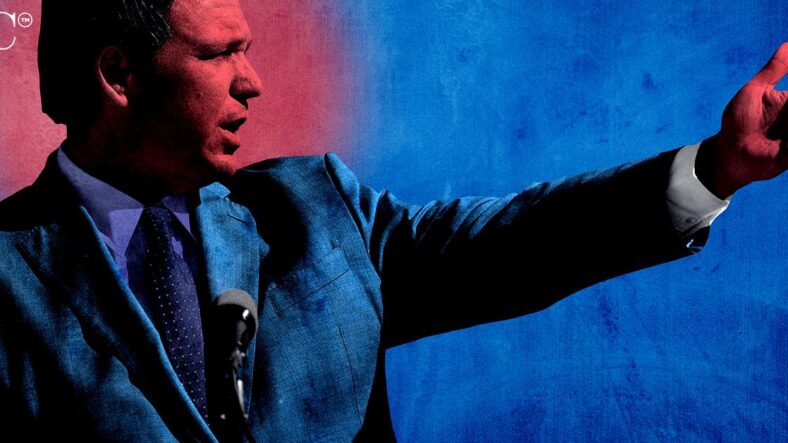 However, one rising star in the Republican party is considered to be a strong challenger to the former candidate darling: Florida Governor Ron DeSantis. The Southern Republican has been racking up win after win for conservative values in the Sunshine State, including taking on the titan of Disney.

Some believe his recent victories paint him as the heir apparent to Donald Trump and may set him up for a neck-in-neck battle for the nomination in 2024, but a recent court loss has people talking. Here's what you need to know about DeSantis's social media battle and where he stands with Trump.

A Loss in Court Over Social Media

DeSantis in Florida has been winning big for conservative values over the past four years. Not only did he manage to block any attempts at long-term mask or vaccine mandates during the pandemic, but he's made it harder for transgender youth to receive affirming care and even campaigned in support of a now-codified education bill nicknamed the "Don't Say Gay" bill which dictates what teachers can and can not say in the classroom about same-sex relationships.

However, one battle may be unwinnable for the 43-year-old Floridian.

In January 2021, when Trump was being banned from social media platforms for his perceived role in the January 6th attempted insurrection, DeSantis wanted to do something about what he saw as unfair targeting of conservative values. Although research has proven time and again that conservative voices aren't silenced more than liberal voices (in some cases, the opposite effect has been noted) the battle against big tech has become a Republican rallying point in recent years. In order to tackle this problem, DeSantis proposed the Stop Social Media Censorship Act (SSMCA).

The bill would fine social media platforms $250K a day for banning political candidates for statewide offices, and $25K a day for lower office candidates. In addition, it set up a system to allow those candidates to sue the platforms and prevent "shadow banning" as well.

From the beginning, legal experts said it was unlikely to stand without challenge. There is precedent that allows social media companies to choose how they operate their platform, including who can and cannot access their services. A court blocked the law quickly and it was sent to appeals court.

An appeals court judge upheld the injunction this month. DeSantis can either request a full review by a panel of 11th circuit judges, take it to the Supreme Court, or drop it. But what happens to the bill from this point forward is almost moot – it was his willingness to take on what many perceive as "liberal big tech" that wins him political points with his voter base.

How Nik Richie Saved the Internet

The battle for what social media platforms and websites can post on their sites without interference from others is nothing new.

In 2014, Richie Media Corp's Nik Richie won in court over a lawsuit that was filed over content posted on the old gossip hotspot, The Dirty. Information had been posted on the website about the sex life of a former Bengal's cheerleader. The way the website operated was that people sent in information, Richie would review and comment on it, and then it would be posted. Initially, the lawsuit proceeded and Richie was on the hook for $338K.

However, the implications of the lawsuit reached far behind one cheerleader's reputation. Critics of the initial ruling believed that if internet publishers could be punished legally for content posted to their sites, it would quickly curtail free speech.

Social media platforms and internet sites quickly saw the dangerous writing on the wall, per ABC News; "'If websites are subject to liability for failing to remove third-party content whenever someone objects, they will be subject to the 'heckler's veto,' giving anyone who complains unfettered power to censor speech,' according to joint briefs filed by lawyers for Facebook, Google, Microsoft, Twitter, Amazon, Gawker and BuzzFeed, among others."

When Richie was ultimately granted immunity, it was a huge win for social media and internet sites' free speech rights. Because businesses are considered entities, they're granted the same protections as individuals – which means they can't be punished for what's published on their site. But the newest court win for the companies also proves that they're businesses which can determine how they operate, including who can post on their platforms.

California Law May Allow Parents to Sue Social Media – Will it Stick?

Despite all of that precedent, a California bill is aiming to pave the way for parents to sue social media companies if their kids become addicted to the platforms.

Proponents of the bill suggest that social media companies are "experimenting" on creating life-long obsessive customers out of children, and that it's causing real and actionable harm. Teens are shown to suffer from self image issues and depression at higher rates that correlates with their increasing use of social media.

For those who are suffering mental or emotional harm from their use of social media and wish to quit but can't because of the negative effects of being addicted to using the platforms, the new law would allow parents to seek monetary damages from the biggest platforms such as TikTok, Facebook, Instagram and others.

However, tech companies may just opt out of participating at all – by completely banning users under 18. If kids still continued to access the platforms, it would be against the rules of the site and therefore the parents would be liable for their children's violations of the terms of services, not the platform.

So while there's a solid chance the bill will pass, it's unlikely to do much. Either the companies will just sidestep the need to host minors at all, or the appeals process will tie it up for years, using precedent set in Florida, by Richie's case, and other laws to maintain their right to operate unmolested by the government.