What do January 6, 2021, and a presidential election in Brazil have in common? A surprising amount. For the past 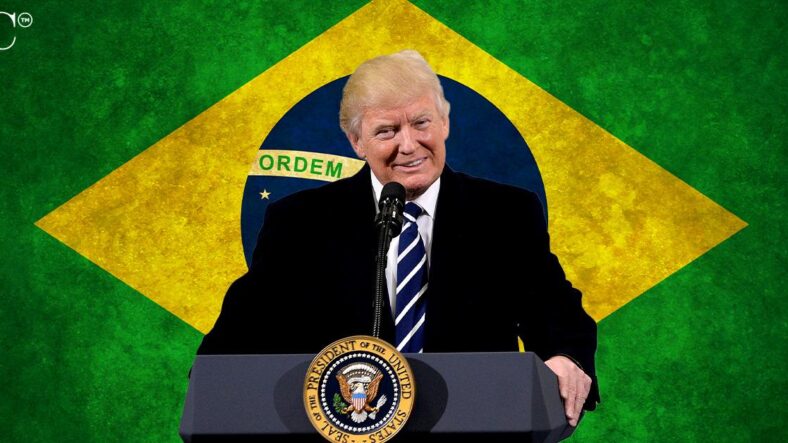 What do January 6, 2021, and a presidential election in Brazil have in common? A surprising amount.

For the past four years, incumbent Brazilian President Jair Bolsonaro has been openly imitating one man: former POTUS Donald Trump. From copying his rants against COVID lockdowns and targeting minorities with hateful speech, he's been called "Trump of the Tropics" in the media, with little irony.

Bolsonaro just tied with his opponent in the country's first round presidential election, and it will head to a run-off in late October against opponent Luiz Inácio Lula da Silva. Experts suggest that the world can expect to see Bolsonaro imitate Trump's "stop the steal" efforts which culminated in the violence of January 6.

Trump has claimed credit for Bolsonaro's win, and the eerie parallels may prove that Trump is not only willing to encourage another January 6 – it's all part of the plan.

Bolsonaro isn't just Trump lite, he's Trump 2.0. They share the same mannerisms, beliefs, and tactics – and that includes discrediting the election before it even occurred in Brazil.

Trump has taken to Truth Social to claim credit for Bolsonaro's tie (and what he claims will eventually be victory in October), and it's a revealing statement. Trump wrote, "Give Truth Social a lot of credit for the incredible win for President Jair Bolsonaro of Brazil in making it into the run off for a new term, which will take place against a Radical Left lunatic on October 30th. My Endorsement of him was done exclusively on Truth, and it had a spectacular impact for a spectacular man, and President. Vote Bolsonaro!!!"

Stay focused! One of the main and most difficult goals was achieved yesterday. We already have what it takes to free Brazil from the authoritarianism, blackmail and injustice that so dignifies us. The most profound change in the country has begun! It is not the people who should fear.

Note the parallels to events that occurred in the US ahead of the November 2020 election and eventual January 6 riots. Trump calls Bolsonaro's opponents a "radical left lunatic" which may sound familiar. Trump is already planning for Bolsonaro's "new term," and he calls the extremist leader "a spectacular man." One might almost be forgiven for assuming he's talking about himself – because it all sounds exactly like things he said about his own loss, which he claimed as a victory, in 2020.

Experts believe that Bolsonaro will use Trump's "stop the steal" methods ahead of the October run-off to get supporters fired up and active. This includes protests, inflammatory language, and a promise of "retaking" power if the people work hard enough for it. Again, the parallels are clear.

The fact that Trump has inserted himself into this election is no mistake. While Brazil is an important trading partner, this doesn't appear to be about Brazil for Trump – this appears to be about his plans for 2024, and signaling that he's already ready to repeat the actions of 2020.

A contrite person who believed that – although he was wronged – perhaps he may have gone a little too far in inciting followers to violence would not be cheering on a repeat of the same. Trump, beset by legal woes from his alleged involvement with January 6, should by all accounts be distancing himself from Bolsonaro and staying out of it. But instead, he's doubling down and showing that he believes in this tactic and this "right to rule by might" that Bolsonaro is pushing, and that he himself pushed ahead of January 6.

It's a grim reminder that although it's been over a year since the Capitol riots in Washington, it can happen again – and may, if Trump doesn't win in 2024.