‘You Have Me Confused With Biden!’- Donald Trump Jr. Responds To Cocaine Allegations 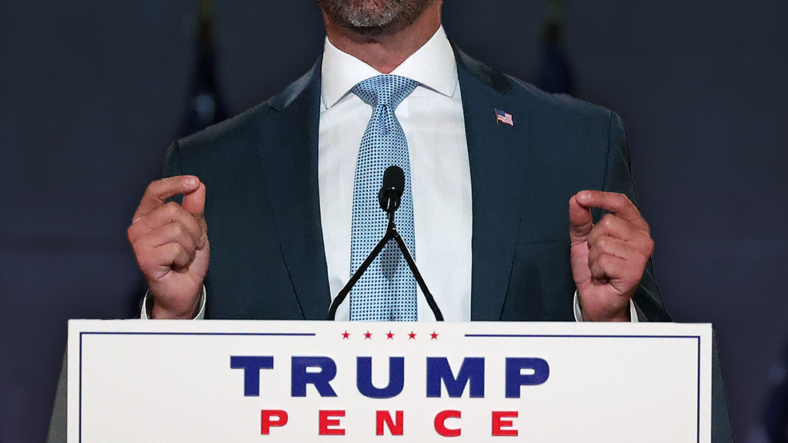 Here is the full speech Trump Jr. gave [note that we have bolded the parts that stood out to us the most]:

We’re here tonight to talk about the Great American Story. To talk about this country we all love. This Land of promise and opportunity — of heroes… and greatness.

Just a few short months ago, we were seeing the American Dream become a reality for more of our citizens than ever before.

And then, courtesy of the Chinese Communist Party, the virus struck.

The President quickly took action and shut down travel from China. Joe Biden and his Democrat allies called my father a racist and xenophobe for doing it. They put political correctness ahead of the safety and security of the American people.

Fortunately, as the virus began to spread, the President acted quickly and ensured ventilators got to hospitals that needed them most. He delivered PPE to our brave frontline workers. And he rallied the mighty American private sector, to tackle this new challenge.

There is more work to do, but there is light at the end of the tunnel.

Job gains are outpacing what the so-called experts expected.

Democrats claim to be for workers, but they’ve spent the entire pandemic trying to sneak a tax break for millionaires in Democrat states into the COVID relief bill. Then they attacked my father for suspending the payroll tax for middle-class workers.

In fact, if you think about it, Joe Biden’s entire economic platform seems designed to crush the working man and woman.

He supported the worst trade deals in the history of the planet. He voted for the NAFTA Nightmare. Down the tubes went our auto industry. He pushed TPP. Goodbye manufacturing jobs.

Beijing Biden is so weak on China that the Intelligence Community recently assessed that the Chinese Communist Party favors Biden. They know he’ll weaken us both economically and on the world stage.

Biden also wants to bring in more illegal immigrants to take jobs from American citizens. His open border policies would drive wages down for Americans at a time when low-income workers were getting real wage increases for the first time in modern history.

He’s pledged to repeal the Trump Tax Cuts, which were the biggest in our history. After eight years of Obama and Biden’s slow growth, Trump’s policies have been like rocket fuel to the economy and especially the middle-class. Biden has promised to take that money back out of your pocket and keep it in the Swamp.

But that makes sense, considering Joe Biden is basically the Loch Ness Monster of the Swamp. For the past half-century, he’s been lurking around in there. He sticks his head up every now and then to run for President, then he disappears and doesn’t do much in between.

So if you’re looking for hope, look to the man who did what the failed Obama-Biden Administration never could do and built the greatest economy our country had ever seen–and President Trump will do it again.

We will be stronger than ever, because when we put our mind to it, there’s no obstacle that America can’t surmount.

Except there’s a difference this time. In the past, both parties believed in the goodness of America. We agreed on where we wanted to go. We just disagreed about how to get there.

This time the other party is attacking the very principles on which our Nation was founded:

Thomas Jefferson famously said, ‘I have sworn upon the altar of God, eternal hostility against every form of tyranny over the mind of man.’ Our Founders believed there was nothing more important than protecting our God-given right to think for ourselves.

Now the Left’s trying to ‘cancel’ all of those Founders. They don’t seem to understand this important principle: In order to improve in the future, we must learn from our past–not erase it.

So we are not going to tear down monuments and forget the people who built our great Nation. Instead, we will learn from our past so we don’t repeat any mistakes. And we will work tirelessly to improve the lives of all Americans.

Joe Biden and the radical left are also now coming for our freedom of speech and want to bully us into submission. If they get their way, it will no longer be the ‘Silent Majority,’ it will be the ‘Silenced Majority.’

This has to stop. Freedom of expression used to be a Liberal value, at least before the radical Left took over. Now the Republican Party is the home of free speech–the place where anyone from any background can speak their mind. And may the best ideas win.

People of faith are under attack. You’re not allowed to go to church, but mass chaos in the streets gets a pass. It’s almost like this election is shaping up to be church, work, and school vs. rioting, looting and vandalism– or, in the words of Biden and the Democrats, ‘peaceful protesting.’

Anarchists have been flooding our streets and Democrat mayors are ordering the police to stand down.

Small businesses across America—many of them minority owned—are being torched by mobs.

The Democrat mayors pretend it’s not happening. They actually called it ‘a summer of love.’

And that brings me to another important principle: Every American must be free to live without fear of violence–in your country, in your communities, and in your homes.

All men and women are created equal and must be treated equally under the law. That’s why we must put an end to racism, and we must ensure that any police officer who abuses their power is held accountable. What happened to George Floyd is a disgrace. And if you know a police officer, you know they agree with that, too.

But we cannot lose sight of the fact that our police are American heroes. They deserve our deepest appreciation. Because no matter what the Democrats say, you and I both know when we dial 911, we don’t want it going to voicemail. So ‘defunding’ the police is not an option.

But safety is only the beginning. Trump’s America is a land of opportunity–a place of promise.

I was fortunate enough to grow up in a family that could afford the best schools and the finest universities. But a great education cannot be the exclusive right of the rich and powerful. It must be accessible to all.

That’s why my dad is pro-school choice. That’s why he called education access the civil rights issue of not just our time–but of all time. It is unacceptable that too many African American and Hispanic American children are stuck in bad schools just because of their zip code. Donald Trump will not stand for it.

If Democrats really wanted to help minorities and underserved communities, instead of bowing to big money union bosses, they’d let parents choose what school is best for their kids. They’d limit immigration to protect American workers. They’d support the police who protect our neighborhoods. They’d learn how to negotiate trade deals that prioritizes America’s interests for a change. They’d end the endless wars and quit sending our young people to solve problems in foreign lands. They’d cut taxes for families and workers. They’d create Opportunity Zones that drive investment into inner cities.

In other words, if Democrats cared for the forgotten men and women of our country, they’d do exactly what President Trump is doing.

America is the greatest country on Earth. But my father’s entire worldview revolves around the idea that we can always do even better.

Imagine the life you want to have–one with a great job, a beautiful home, and a perfect family. You can have it.

Imagine the country you want to live in–one with true equality of opportunity, where hard work pays off and justice is served with compassion and without partiality. You can have it.

Imagine a world where the evils of Communism and radical Islamic Terrorism are not given a chance to spread–where heroes are celebrated and the good guys win. You can have it.

That is the life, that is the country, that is the world that Donald Trump and the Republican Party are after. And yes, you can have it. Because unlike Joe Biden and the radical Left Democrats, our Party is open to everyone.

It all starts by rejecting the radicals who want to drag us into the dark, and embracing the man who represents a bright and beautiful future for all. It starts by re-electing Donald J. Trump President of the United States.

Thank you and God Bless America.”

As Trump Jr. was giving his speech, many took to social media to criticize his eyes. Some were suggesting he looked like he was crying (going as far as to question if his father had yelled at him before the speech), while others started to allege drug use.

As of today, #cocaineconvention is trending on Twitter, with many pointing to pictures of Trump’s eyes last night. Others on social media have alleged Kimberly Guilfoyle, Trump Jr’s girlfriend (who also spoke last night) was also on cocaine. There have been no confirmations to these allegations, and neither Trump Jr. or Guilfoyle have responded to them.

Due to all of the chatter regarding Trump Jr’s eyes, there has been little talk about the content of his speech. 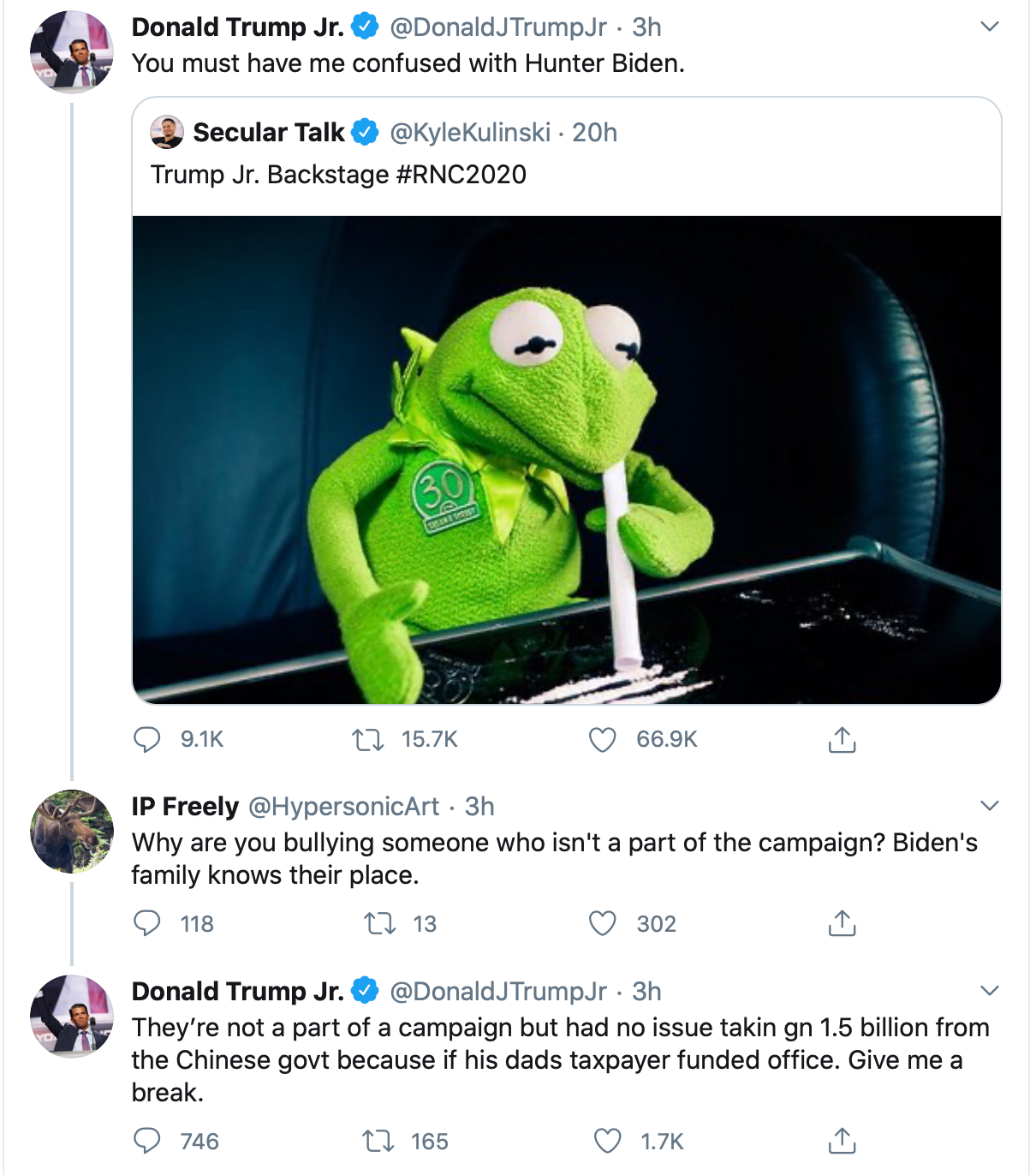 As can be seen above Trump Jr. responded to the cocaine accusations.

“You must have me confused with Hunter Biden,” Trump Jr. responded to someone who had tweeted an image of Kermit The Frog snorting cocaine. This was referring to Joe Biden’s son Hunter’s battle with drugs (which included cocaine).

When asked why he was bullying someone who wasn’t part of the campaign, Trump Jr. responded that “They’re not a part of a campaign but had no issue takin gn 1.5 billion from the Chinese govt because if his dads taxpayer funded office. Give me a break.”

Exclusive: Down the Rabbit Hole: A QAnon Crash Course with Liz Crokin