Right now, the Republican party is a Tale of Two Opposites. In one corner, you have former President Donald Trump 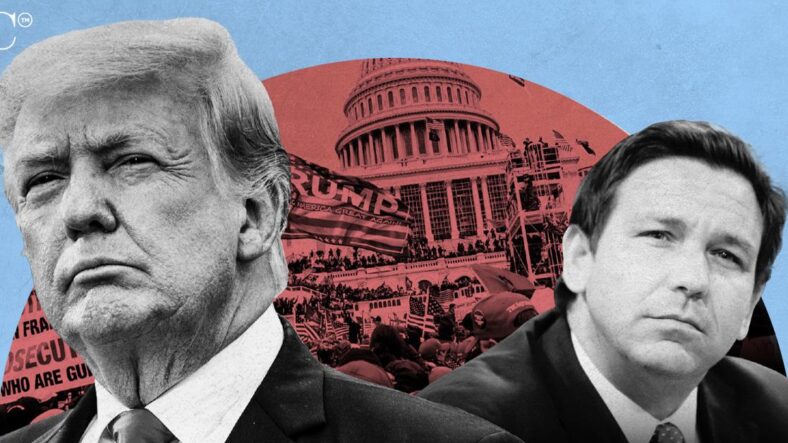 Right now, the Republican party is a Tale of Two Opposites. In one corner, you have former President Donald Trump trying to get on-air network interviews as he lines up his 2024 presidential run.

In another corner, it's Florida Governor Ron DeSantis – oft thought of as Trump's heir apparent – being an effective Conservative leader and waging war on 'woke' officials in his attendant state.

Although there are other Republicans making rumblings about running in 2024 and the midterms are stirring names up from the depths, only these two are making the kind of headlines a winner will need for the nomination.

And the contrasts between them could not be starker.

From a policy standpoint, DeSantis and Trump share a lot in common. Both espouse Conservative legislative goals, and both loathe the "mainstream media" and "woke culture."

DeSantis has even taken on the same physical gestures and speaking cadences as Trump, appealing to the familiar image of their leader that Trump's base adores. Wide hand gestures, thrusting his chin forward, nodding now instead of standing still like he used to – all are affectations that have made him instantly recognizable behind a podium and which DeSantis now employs surgically.

But in action, they could not be more different.

Trump's leadership style was more of a lone wolf who could bend the laws to his will. While it was effective in office, it may have come back to bite him in the end as he's now facing a cascade of legal troubles from all the times he essentially said, "It's good to be the king," and did what he pleased, legal or not.

But DeSantis is careful; he works within the framework of the law and changes those that don't further his agenda. Although some of his executive orders have faced questionable futures in appeals courts, for the most part what he does is urge his Conservative majority legislature to make the laws he needs to enact the administration's agenda. In Florida, this has turned into a culture war against "wokeness" and liberal progress, which now has come to a boil over one state prosecutor.

Warren was suspended for refusing to prosecute the state's new 15-week abortion ban, along with signaling he supports gender-affirming care for minor transgender children, a break from the state's official position as outlined by Florida's Surgeon General Joseph Ladapo.

Warren has long been considered a rising star in the Democratic party, and DeSantis's laser focus on taking his legs out from under him are a part of his overall move across the state to line up a Conservative majority from bottom to top, including a string of School Board endorsements last month.

Today’s political stunt is an illegal overreach that continues a dangerous pattern by Ron DeSantis of using his office to further his own political ambition. It spits in the face of the voters of Hillsborough County who have twice elected me to serve them, not Ron DeSantis.

In our community, crime is low, our Constitutional rights – including the right to privacy – are being upheld, and the people have the right to elect their own leaders – not have them dictated by an aspiring presidential candidate who has shown time and again he feels accountable to no one.

Just because the governor violates your rights, it doesn't mean they don't exist.

DeSantis claims that Warren is in violation of his duty, accusing him of neglect of duty and incompetence. Warren for his part is trying to ignore the Governor, saying in a statement that it's nothing but a "political stunt" from someone with designs on the presidency.

Providing a Stark Contrast to Donald Trump in Recent Days

DeSantis's focus and ability to take the battle directly to the people in his way provides a contrast to what's happening with Trump, who can't seem to get live network coverage no matter how hard he tries.

Fox News recently turned its back on the former president, focusing on hopefuls like DeSantis and former vice president Mike Pence, along with Nikki Haley and others.

Trump continues to hold popular rallies and post on his social media platform, Truth Social, but he hasn't be interviewed on air on Fox since April – and other networks are no more friendly to the troubled business mogul.

As Trump faces legal woes from nearly every direction, including culpability for the January 6 riots, attempts to overturn the election results in Georgia and other states, and shady business practices at the head of the Trump Organization, DeSantis is setting himself up to be the perfect Conservative champion.