‘Nothing Can Stop What is Coming’: Donald Trump’s Truth Social Rampage Promises ‘Ammo’ and ‘Punishment’ for Traitors

In a late-night Truth Social post binge, Donald Trump shared some questionable posts. While this doesn't mark the first time 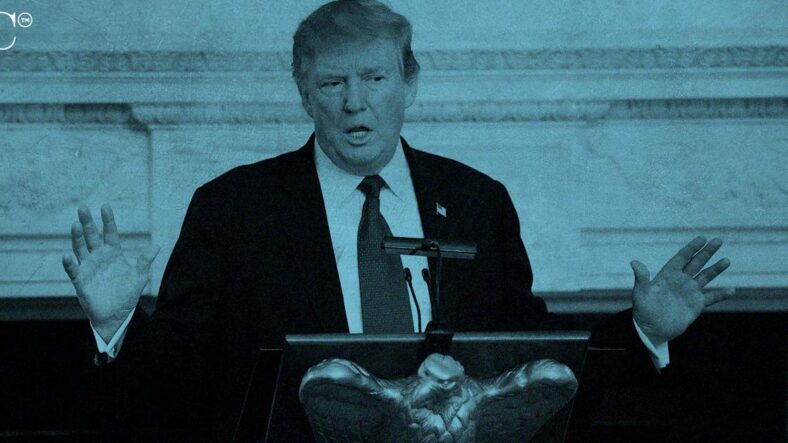 While this doesn't mark the first time the former President has shared Q-Anon conspiracy theory propaganda, it does mark an escalation in the rhetoric he's willing to signal boost.

Considering the fact that the January 6 hearings will reconvene soon (they were scheduled to restart September 28 but were postponed due to Hurricane Ian), it's surprising to see the former POTUS continue to boost messages that could be construed as a call to arms – but that's exactly what he's doing.

Last night, Trump went on a re-'Truth'-ing rampage, sharing dozens of posts from supporters and allies.

One, Trump not only shared once, but then shared again shortly after and added the caption, "Believe!" The post was an image of Trump sitting in front of an American flag, with his hands steepled before him. Across the image was written, "Nothing can stop what is coming. Nothing." 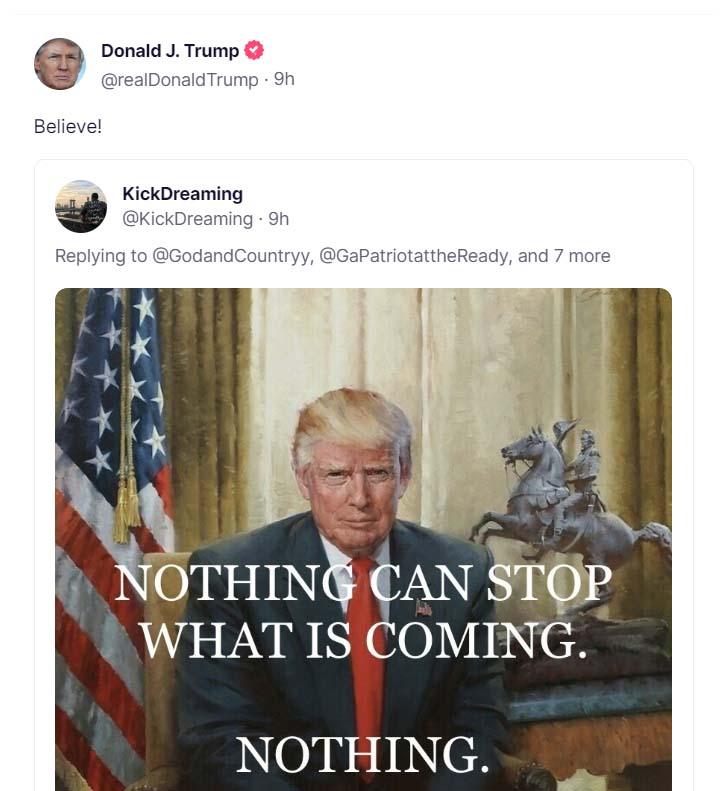 It's made ominous by a juxtaposition of other posts he shared last night, including one that showed a stylized cartoon shadow version of a soldier with a flag over his shoulder and eagle wings behind him, with the words, "Until I am out of ammo or I am out of blood I will fight for America." 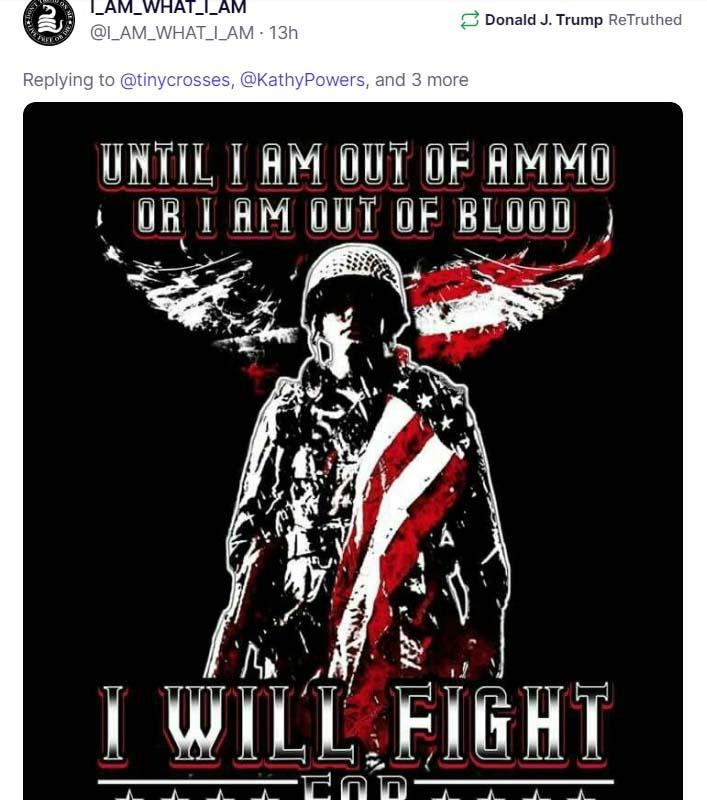 One post Trump shared read, "If those responsible for the treasonous acts committed against our country and the American people in the 2020 election will be severely punished, our election system will be never trusted again."

Other posts shared by Trump made ample references to God and the former POTUS's divine mandate to the presidency, as his followers interpret it.

Trump again woke this morning to share more posts from followers on Truth Social, taking time out to criticize President Joe Biden over his handling of the leak of a natural gas pipeline out of Russia. First, he wrote, "Everyone is talking about the big hurricane barreling into Florida, as they should be, but perhaps a far more important event in the longer term was the announcement that the Nord Stream I & II Pipelines out of Russia (which I brought to the World’s attention as President when I explained how crippling reliance on it could be for Germany and other parts of Europe. Everybody laughed at the time, but they are not laughing anymore!) has been SABOTAGED. This could lead to major escalation, or War!"

Then, he offered to find a solution himself, "U.S. 'Leadership' should remain 'cool, calm, and dry' on the SABOTAGE of the Nord Stream Pipelines. This is a big event that should not entail a big solution, at least not yet. The Russia/Ukraine catastrophe should NEVER have happened, and would definitely not have happened if I were President. Do not make matters worse with the pipeline blowup. Be strategic, be smart (brilliant!), get a negotiated deal done NOW. Both sides need and want it. The entire World is at stake. I will head up group???"

Many of last night and this morning's messages included the promise, "the best is yet to come."

A Book Revealing All of Trump’s Bad Behaviors

NEW: Donald Trump assumed that a racially diverse group of top congressional aides at a White House meeting were waiters, according to Maggie Haberman’s new book.https://t.co/7Ygnwv1hIf

Trump's social media posting frenzy comes against a backdrop of increasing legal peril, the weight of the January 6 investigations on his shoulders, and a new book coming out that could well reveal a lot of bad behavior the former POTUS might wish was kept under wraps.

New York Times reporter Maggie Haberman, often the target of Trump's ire for her work during his administration, is releasing a book October 4 titled, "Confidence Man: The Making of Donald Trump and the Breaking of America."

In it, Haberman tells stories of those who were close to the former President and one story highlights behaviors the FPOTUS engaged in unthinkingly, but which had consequences for people with whom he interacted.

During a 2017 White House reception, aides for Sen Chuck Schumer and Rep Nancy Pelosi attended, and were by all accounts a very visibly racially diverse group. Trump approached them and told them, "Why don't you get" the food, according to the book.

Trump was corrected and the real wait staff was sought, but it's a jarring reminder of how out of the ordinary things were during Trump's time in the White House.

Haberman's book has already provided a number of revealing and sometimes damning peeks into what it was like to be in Trump's close orbit, but none perhaps as shocking as that revealed by the House panel investigating January 6. Those hearings were set to resume today, but were postponed due to the arrival of Major Hurricane Ian in Florida.