Fans watching The Real Housewives of New York City this year have seen a lot of drama play out between Ramona Singer and the other women. Amongst the women who have drama with Singer is her longtime friend (from before they were on the show together), Dorinda Medley.

Singer has continued to claim in interviews (and in talks with other cast members) that Medley is in a dark place and very angry. On last week’s episode, things between the pair at Luann de Lesseps’s Halloween party definitely tuned heated, with Singer claiming Medley was “drunk” (even though it was blatantly obvious to the viewers she was not) and Medley calling her out on her comments in a toast.

On last night’s episode, which took place in Medley’s beautiful Berkshires home, Singer attempted to squash the beef with Medley but continued to discuss her in the confessional interviews. Singer also got into it with Elyse Slain, who is a “friend” of the Housewives this year, but someone who has been close with Singer for many years.

Here’s what Dorinda Has To Say…

We caught up with Medley exclusively today to discuss what exactly is going on with Singer. 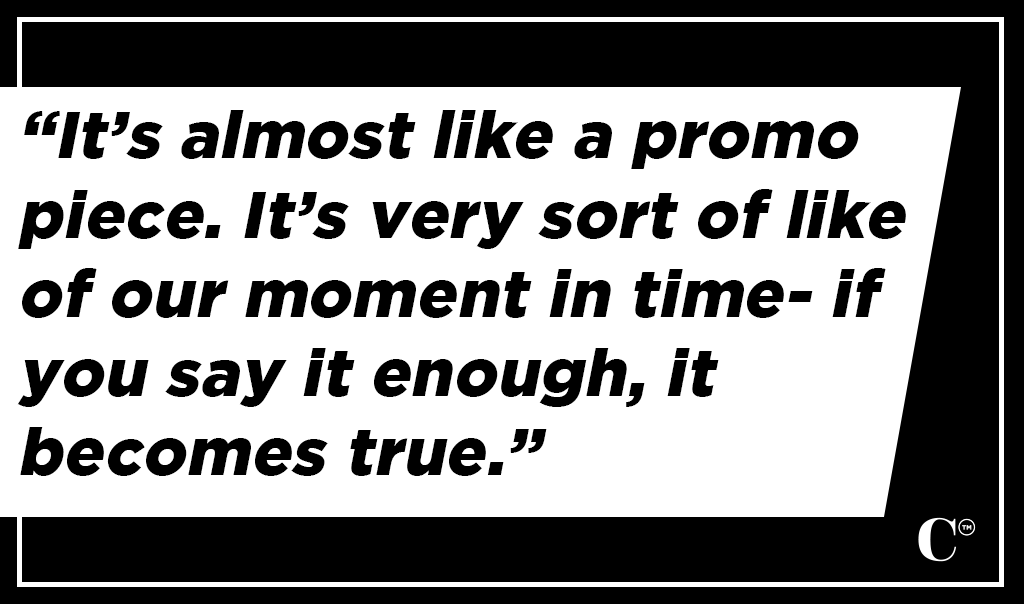 When asked why she thinks Singer has it out for her this year, Medley began by telling us that “It is interesting. I was thinking about it the other day. What’s interesting about it is that- the natural progression of the show is that we go on the show, we know what we’re doing, we do what we do, we’re totally engrossed in it and then we leave and the process of getting ready for the reunion and getting ready for the next year because we are such long term friends that we have to work to it and come to a conclusion and then start again.”

A Smear Campaign by Ramona?!

“Even to this day,” she continued, “she still is kind of trying to promote this thing that I’m angry, I’m this, I’m that- I think… from my perspective, she got a storyline and she kind of went with it. Even when she came to the Berkshires [on last night’s episode], I was happy. She kind of tries to do the happy thing with me, but behind the scenes in the interviews- in the light of the day she’s trying to- I’m fully willing- I invited her, I welcome her. But her interviews are still- before the Berkshires she’s [saying I’m] so angry. It’s almost like a promo piece. It’s very sort of like of our moment in time- if you say it enough, it becomes true.”

Medley further elaborated that “Ramona does well with smear campaigns. ‘Let me smear you’- so that becomes the focus. Not about what we need to talk to, but something degrading, defamatory, and hurtful so that we start from that place. The truth of the matter is she was wrong. She literally- the other girls said… she brought us there to get a free party. Just admit it… just say that. She made it out like we were going out downtown for a quick thing because she needed herself. I had an appointment at 5 I missed. It was like five hours. And then she ignored us and… then had us do promo pictures… everything was agenda based. I just didn’t feel like Ramona… she sends me these weird articles, like anger articles. It’s like what are you doing? First of all this happened 7 months ago, we’re upon going to the reunion, and she has acted terribly during [what I call] the plague.”

A Hard Year for Medley…

While Medley was critical of how Singer has responded to her- and the picture she’s tried to paint- Medley didn’t deny she had a hard year last year.

“I had a very difficult year last year,” she explained. “My house had close to a million dollars of damage and was closed for nine months. I broke up with John, I broke my ribs, Lucy (my dog) died. [Ramona] says you’re in pain, you’re angry, but here’s the weird thing. How about after 20 years [of friendship] instead of piling on, how about calling me when we’re not filming or calling me and saying how are you doing? [She could say] You’re right, you win. I’m struggling this year.”

Even though she had a hard year- and has had hard moments in her life- Medley doesn’t think her life has really been “tough,” however.

“I had life,” she told us. “I didn’t have a tough life. I’ve been incredibly blessed. Did I have a hardship? Absolutely. Will it always in some part of my life be a sad spot? Of course. I was thinking about Richard [Medley’s husband, who passed away] today when I went over to visit him. I don’t sit there and cry my eyes out, but I think, hey, I kinda wish you were around still? Ramona acts like- at one point during the interview she refers to him as my ex- I mean, I was looking at his grave today, what a hell of a divorce.”

Ramona’s Doing It To Everyone!

Medley then addressed her relationship with John Mahdessian, the man she dated for 7 years, ending.

“Listen,” she explained, “I was in a relationship with 7 years with John. It’s not like I broke up because we had a fight or something. It just came to be. And we’re still very close. We’re still friends. But instead of [Ramona] bashing me about it and bashing him and saying I don’t know how to date, she could have been a little kinder about it.”

“Ramona’s systematically doing it to everyone,” Medley continued explaining of Singer’s behavior. “Me. Elyse. Sonja. There’s just sort of seems like this thing [with Ramona]- Leah, you’re this, you’re disgusting. Dorinda, you’re angry. Sonja, you’re fat. There just seems to be this theme of [Ramona thinking/acting like she’s] better than everybody… I went through a bad patch it doesn’t make me a loser. [If she was truly my friend] she would’ve supported me. It really hurt. It really hurt that instead of being a safe place to fall, she was right there with the wolves to grab me and pull me down.”

“It was very exclusionary,” she added. “When we go on the Housewives in August, obviously in the real world in which we live we’re not together five days a week. But we all do have history together and we know that when we’re filming from August to December that we have to be inclusive. I felt like it was always bigger, better, and faster. She [Ramona] wanted to be with her other friends, her other 50 friends, her other 100 friends. She wanted to change the party of Luann’s- who changes someone’s dinner party to suit her after-party? Who doesn’t let your friend Elyse of 20 years sit at your table?”

But What About Elyse?

Speaking of Slain, Medley then told us how she feels Singer has treated her.

“I like Elyse,” Medley shared. “I’ve known Ramona for a long time. But Elise has known her for a long time too, but in the past 5/6/7 years, they’ve been super close. She really helped her with the breakup with Mario, she helped her with Avery [Ramona’s daughter]- she was like a family member in her life. I think it really side-swiped poor Elyse and it was a weird thing. We didn’t recognize her. We’re all a little bit confused.”

And what about Singer’s claims in last night’s episode to Slain that Singer “gave Elyse her friends?”

“We all knew Elyse,” Medley said to this claim. “Sonja’s had a separate relationship with Elyse. I’ve known Elyse for like 15 years. Ramona didn’t bring us Elyse…”

We then mentioned to Medley that she had recently called Singer out on her Instagram story, claiming Singer should be coronavirus tested after she was at a party with someone who ended up testing positive to coronavirus. 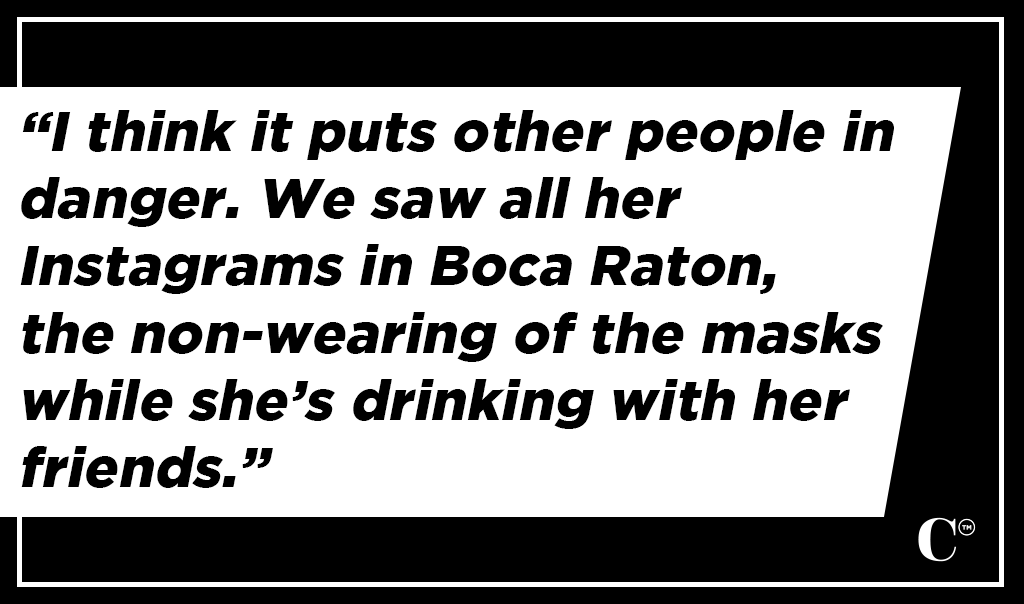 “I’m sorry, I’m not calling her out as a Housewife, but I’m calling her out as a person that is very worried about what we’re going through, that thinks that if we don’t take this seriously it’s going to be a problem,” Medley began with explaining. “I think it puts other people in danger. We saw all her Instagrams in Boca Raton, the non-wearing of the masks while she’s drinking with her friends. I think it’s just- it doesn’t work for me. I take it very, very seriously. I have older parents and I’ve become their caretaker. It’s a concern for me. I run this house very tight. We’ve all loosened up a bit because what else can we do? We can’t live the way we were living at first, but I’m still very cautious… this has to be dealt with with incredible trepidation. If not for the actions of everyone acting like this, maybe it wouldn’t be doing what it’s doing again. We have a good chance of going back into quarantine again. How terrible would that be?”

Dorinda’s Still Got More To Say…

Medley still had a bit more to say on Singer- and unrelated to coronavirus- telling us that, “I know Ramona loves me deep down inside, but there was something going on with her. I think there’s something- she feels like she got cheated, she’s deserving… she doesn’t dare want anyone to be happy before she is. There’s a little bit of that. She has empowered herself a little bit this year by putting down the other girls… there’s a lot of labeling and she did that to Bethenny before when she told her she had no friends.”

She added that “For someone that claims to be a “girls girl”- I’ve been by Ramona’s side in really tough times, I would never have piled on, I would have pulled me aside and said hey, what’s going on- I mean she made a mockery of me going through all of Richard’s stuff. It was sad. I’m not saying I fell apart, but it really was a transitional time for me and it kind of spearheaded a lot of other decisions in my life. I would’ve loved to have an ear to talk to, a friend of mine for over 20 years to say wow, this is hard. And I’m having some sort of feelings about it. Instead, it was like ‘oh my God, she’s still mourning her ex’ and she said John’s such a loser. I felt like I had to be defensive, like a wounded animal when someone gets close to it and they’re sort of petting it and being nice. And I’m like I have to fight while I’m feeling wounded?

The Housewives Need A Resolution

At the end of the day, though, Medley remains hopeful that she and Singer will eventually come to a resolution.

“We all have very long relationships,” she detailed. “It’s not like this started on the show. We all know each other’s lives and families and divorces and deaths. We have to go into this knowing that we’re going to have to deal with difficult situations, but we need resolution. We need resolution as a group and the audience needs resolution.”