Dresden, Germany’s Zwinger palace is an artful masterpiece. Created by Augustus the Strong, Zwinger now holds several museums and a

Dresden, Germany’s Zwinger palace is an artful masterpiece. Created by Augustus the Strong, Zwinger now holds several museums and a rich history of its own. Now that the pandemic is receding, Dresden is reopening, and Zwinger is celebrating with an unprecedented opportunity that blends the past and the future. Zwinger Xperience is a virtual reality experience that allows guests to explore the full breadth of what the palace has to offer. 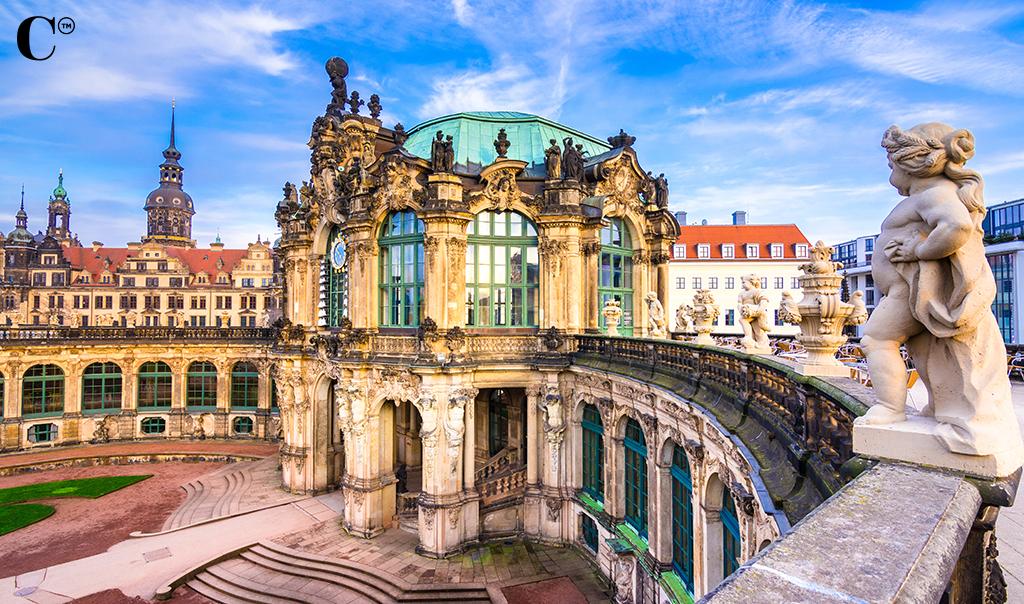 Zwinger is a must-see for visitors to Dresden, and one of Germany’s crown jewels. Built as a reflection of France’s Versailles, the palace is an opulent ode to Augustus the Strong and the history of Dresden. Several museums have been built into the palace, and visitors expect to feel history when they touch the ground in Zwinger. Now, a virtual reality event known as Zwinger Xperience allows guests an unprecedented level of immersion and learning.

Starting June 30th, visitors to the palace were able to don Xperience goggles. The multimedia event uses projections and virtual reality stations to immerse guests in parades, festivals, and historical drama by plopping them right into visions of Zwinger as it once was. The press team shares, “To this day, the Dresden Zwinger shapes the cityscape and reminds us of the splendid Baroque era like no other building. Now, through the Zwinger Xperience, visitors have a chance to learn about the building itself. From May to October, the beautiful orange trees add a

measure of Mediterranean charm. The wall pavilion, the nymph bath and fountain, the arched gallery and the garden in the center are highlights. The architectural details of the Zwinger are just as magnificent as they are overwhelming in their diversity.”

And history is tangible on the grounds as well, with a variety of museums to explore; “The Zwinger Palace houses the Porcelain Collection, the Old Masters Picture Gallery and the Royal Cabinet of Mathematical and Physical Instruments, all of which are part of the Dresden State Art Collections. Known in German as the Staatliche Kunstsammlungen Dresden (SKD), the Dresden State Art Collections comprise 15 highly respected, globally acclaimed museums and now are open for visitors in person. … The digital exhibitions and materials are also prodigious. This museum complex, including the Royal Palace and the Zwinger Palace, are the jewels in Dresden’s museum crown and truly of all of Germany.” 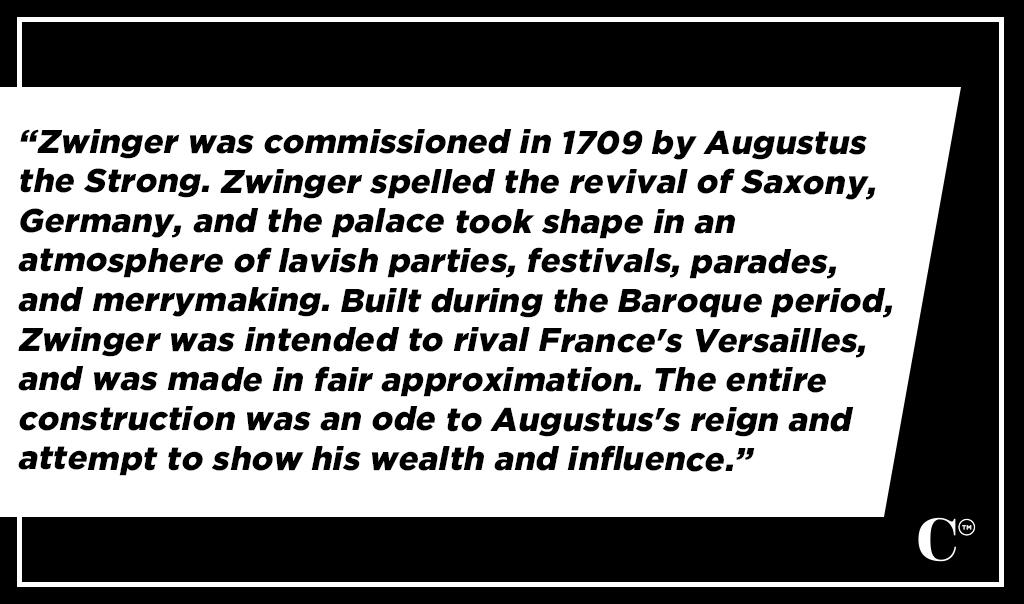 Zwinger was commissioned in 1709 by Augustus the Strong. Zwinger spelled the revival of Saxony, Germany, and the palace took shape in an atmosphere of lavish parties, festivals, parades, and merrymaking. Built during the Baroque period, Zwinger was intended to rival France’s Versailles, and was made in fair approximation. The entire construction was an ode to Augustus’s reign and attempt to show his wealth and influence.

In 2019, the royal apartments were reopened for the first time in nearly three-quarters of a century, after Allied bombs destroyed the opulent wing, obliterating some of its finest features. The Smithsonian shares, “The royal apartments were not just the sleeping quarters of kings and queens; they were a statement by Augustus II the Strong, king of the Polish-Lithuanian commonwealth. After a long, complex series of wars and alliances, Augustus began to double down on soft power by presenting himself as a grand and powerful monarch.

A big part of that was the construction of the royal state apartments, which were built on the second floor of the Residential Palace. Unveiled during the month-long wedding ceremony of his son Augustus III to Archduchess Maria Josepha of the Habsburgs and inspired by Louis XIV’s Versailles palace, the apartments were a series of opulent rooms, each more over-the-top than the next. Visitors were ushered through a ballroom, the ‘tower room’ full of the king’s world-class porcelain collection, the banqueting hall, the audience chamber and the bedchamber, where no one actually ever slept.” 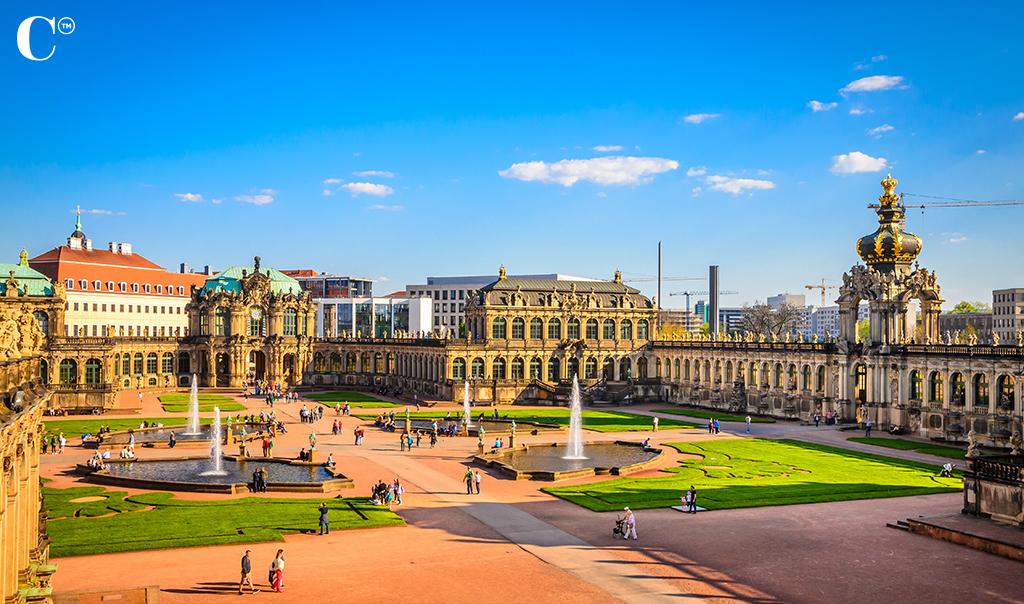 Zwinger’s reopening is a symbolic move for a country hit hard by the pandemic. Germany, under the guidance of Chancellor Angela Merkel, suffered great economic setbacks from a series of pandemic-related shutdowns, but has been able to get the virus relatively under control. As a result, Dresden, Berlin, and other major German cities are able to celebrate the advent of Summer with more and more openings, and fewer restrictions.

Zwinger’s press team shares thoughts on the hopeful reopening; “Like all of the other tourism destinations in Europe and around the world, Dresden suffered from the loss of visitors. Its opera, symphony, museums, galleries, cafes and restaurants had to close but now with the increasing use of the vaccine, Covid is subsiding and the attractions are opening. Germany is open for business not only to all fully vaccinated Americans but also to those who are not vaccinated but have negative Covid tests. Most museums and attractions do require advance registrations, so please plan your visits and visit the websites to make reservations before you go or at your hotel.”

With Zwinger open and offering Xperience to draw visitors in, the palace halls are sure to soon be once again echoing with sounds of joy and merriment.