We all love a music festival, particularly the Electric Daisy Carnival, and 2020 was set to be a great year 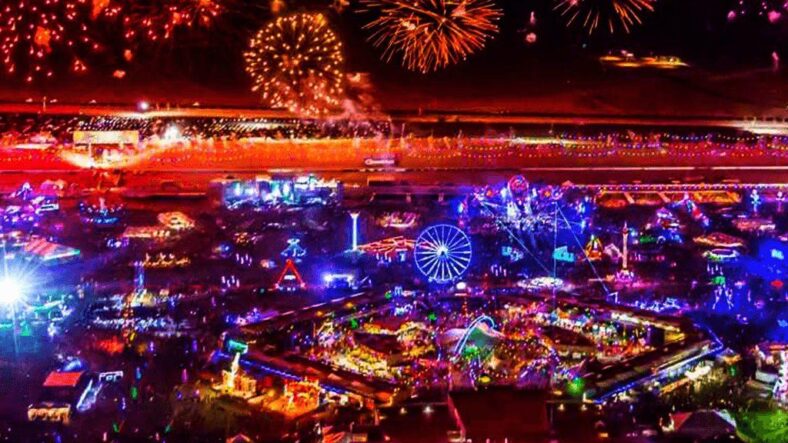 We all love a music festival, particularly the Electric Daisy Carnival, and 2020 was set to be a great year of music and fun under the Electric Sky. But the universe clearly had other plans.

There are a lot of wagers we are willing to make about Las Vegas, despite the surging pandemic.

Do partiers in towering stilettos still end up barefoot after a long night out? 100:1 odds.

Do drunk people at the tables, pools and lounges remember to maintain at least six feet of social distance? 1:100 odds.

Will the all-new Las Vegas Raiders play in the all-new Allegiant Stadium with or without fans this fall? Even money. 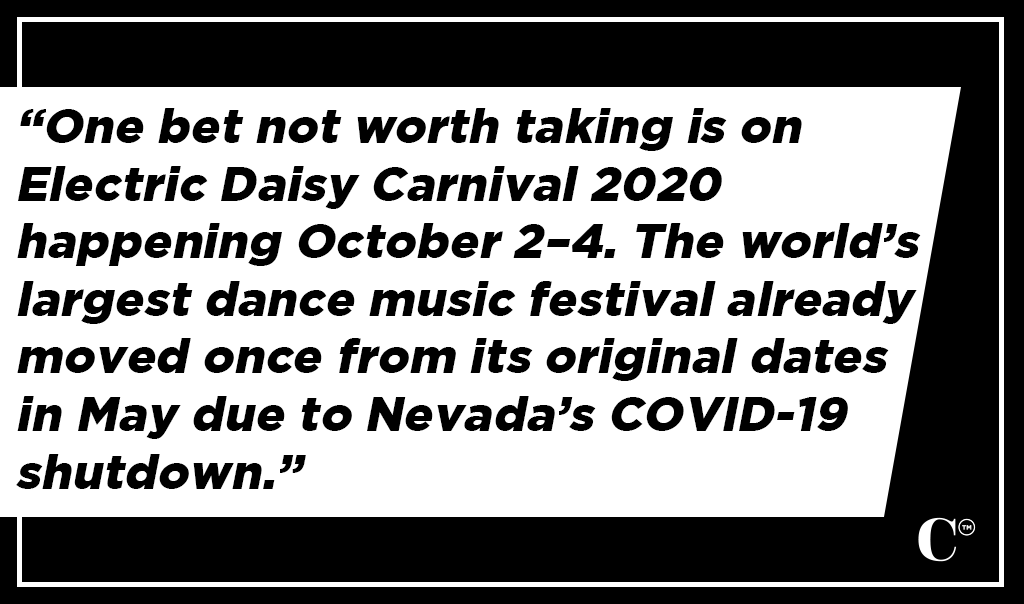 One bet not worth taking is on Electric Daisy Carnival 2020 happening October 2–4. The world’s largest dance music festival already moved once from its original dates in May due to Nevada’s COVID-19 shutdown.

What’s going on in Nevada?

Now entertainment industry insiders are dismayed that EDC Las Vegas has yet-to-be canceled completely, even though there is little to no chance of it occurring this fall the way things are going for Nevada. (On July 9, Governor Steve Sisolak rolled back bars to phase one, closing all those that don’t make the majority of their money from food sales. That means if your only menu item is chips and salsa, you don’t qualify as a restaurant.) Since the state is stuck in phase two of its “Roadmap to Recovery,” meaning that live events cannot happen for the foreseeable future, the reality of “no EDC” is the equivalent to taking a match to a pile of cash—$300 million to be exact. The three-day spectacle at Las Vegas Motor Speedway attracts more than 200,000 attendees and is one of the city’s top economic drivers.

Las Vegas closed its doors on March 17 and Electric Daisy Carnival announced April 3 that it was postponing the 10-year anniversary event. In a statement, festival founder Pasquale Rotella said,  “You, the Headliners, are the heart and soul of EDC. Without you Insomniac wouldn’t exist. Thank you for being patient and supporting us while we’ve worked through this to make the best decision. EDC Las Vegas 2020 will take place October 2 to 4, with Camp EDC kicking things off Thursday, October 1.Nothing changes but the date. The team and I took every single factor into consideration: weather, hotel rates, talent availability, coordination with the Speedway and local officials, and most importantly, a date that would give us enough time for things to get back to normal so we can all come back stronger than ever.”

One thing Rotella didn’t bank on: Normal no longer exists.

EDC 2020 ticket holders are not happy…

In the months after that announcement, angry ticket buyers who requested refunds to the sold-out festival flooded EDC Las Vegas’ social media feeds begging for word on when they would receive their money. Passes start at $379 and go up to $779.

Rotella even took to his own social media in early May, posting a photo of him and his kids, promising “headliners” that “refunds are coming.”

While Insomniac’s top decision makers are most liking figuring out when to pull the plug on 2020, the rave goes on from a distance thanks to the Virtual Rave-A-Thon livestream on TV.Insomniac.com with talent such as David Guetta and Kaskade.

It has been a rocky era for the entertainment and convention capital of the world. As Celeb Magazine reported last week, Nevada’s COVID-19 situation has been escalating with cases rising, hospitalizations increasing and the state has the highest transmission rate in the country. Lawsuits claiming unsafe work environments on the Strip, casino worker deaths and COVID cleanups have become the new normal. 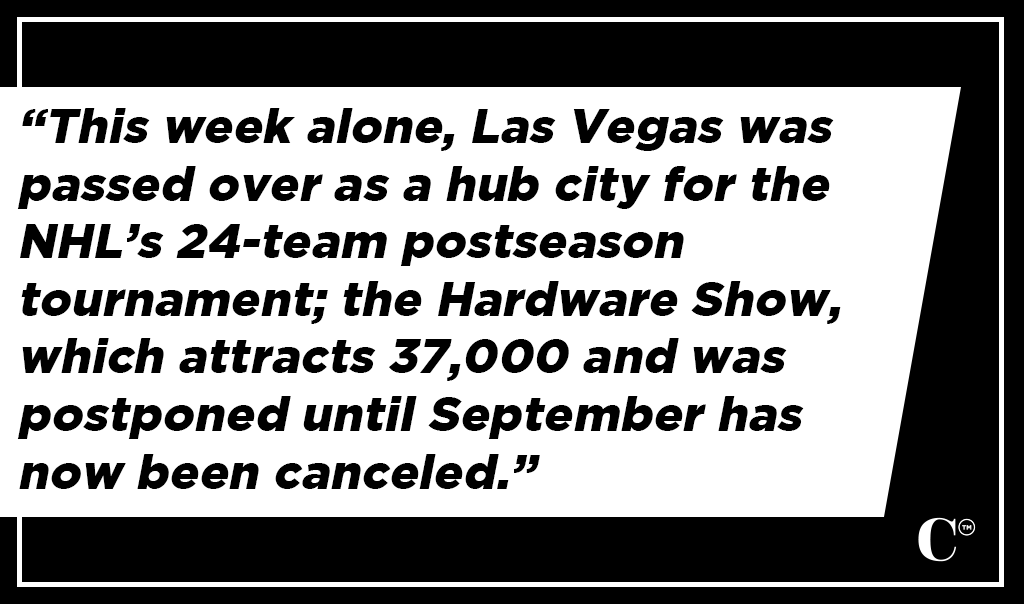 This week alone, Las Vegas was passed over as a hub city for the NHL’s 24-team postseason tournament; the Hardware Show, which attracts 37,000 and was postponed until September has now been canceled; and it’s quite possible that National Finals Rodeo, bringing in about $200 million every December, will go fanless. Sources say the 2021 convention season, set to bring in more than $10.5 billion and kick off in January with the Consumer Electronic Show is in serious jeopardy. Rumors are also circulating that Virgin Hotel Las Vegas, under construction on the former site of the Hard Rock Hotel & Casino, will not open until spring 2021.