A Recap Of The 2020 Emmy Awards: Winners, Wildest Moments, Best Outfits And More

Between the dazzling outfits, the awkward moments, the shocking winners and the moving speeches, the 2020 Emmy Awards was definitely 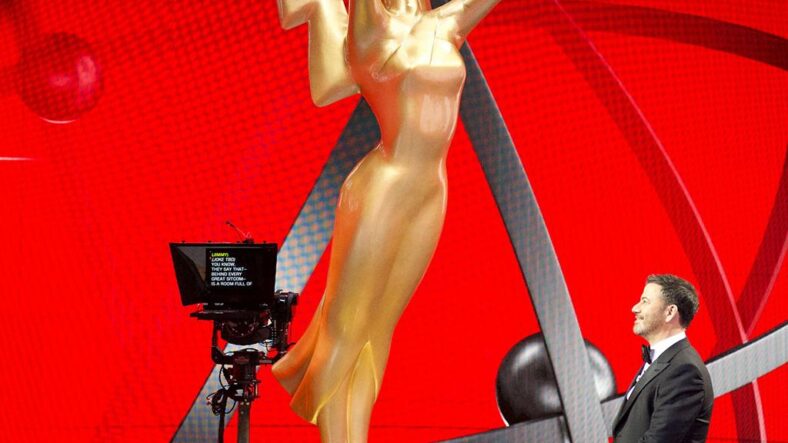 Between the dazzling outfits, the awkward moments, the shocking winners and the moving speeches, the 2020 Emmy Awards was definitely a night from remember.

Yep, the star-studded event took place on Sunday, September 20, and so many big stars made appearances (virtually, of course). Missed the awards show? Not to worry, people, because we’ve got you covered. We went ahead and recapped everything that went down for you, and boy, was there a lot of drama!

Congratulations are in order for Zendaya because not only did she win her first ever Emmy Award for Best Lead Actress in a Drama, but the Euphoria star also made history by becoming the youngest person to ever win an award at the event! You go, girl! 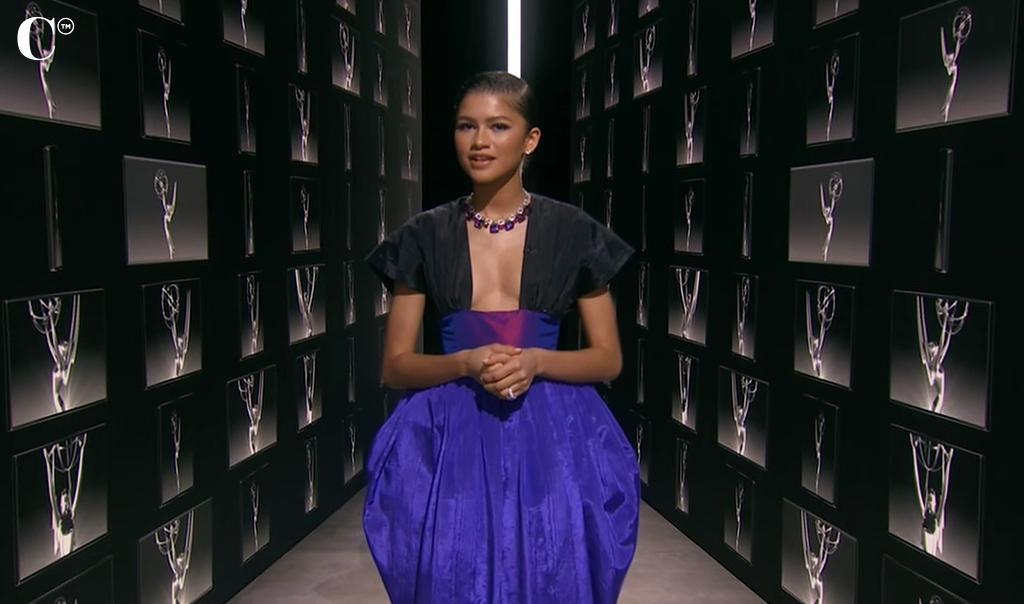 Other winners included Mark Ruffalo for I Know This Much Is True, Regina King and Yahya Abdul-Mateen II for Watchmen, Uzo Aduba for Mrs. America, Eugene Levy, Catherine O’Hara, Dan Levy and Annie Murphy for Schitt’s Creek, Jeremy Strong for Succession and more.

This show set a record for the most wins by a single comedy series in the same season! And get this — the ongoing coronavirus pandemic did not stop the cast from celebrating all of their awards. It turns out, they all got tested for the virus and quarantined for 14 days before the event so that they could get together.

“It is absolutely incredible,” Levy said of the wins. “It feels like a dream that you don’t want to wake up from to be perfectly honest.”

Jason Bateman Was Accidentally Announced As A Winner, And Boy, Was It Awkward 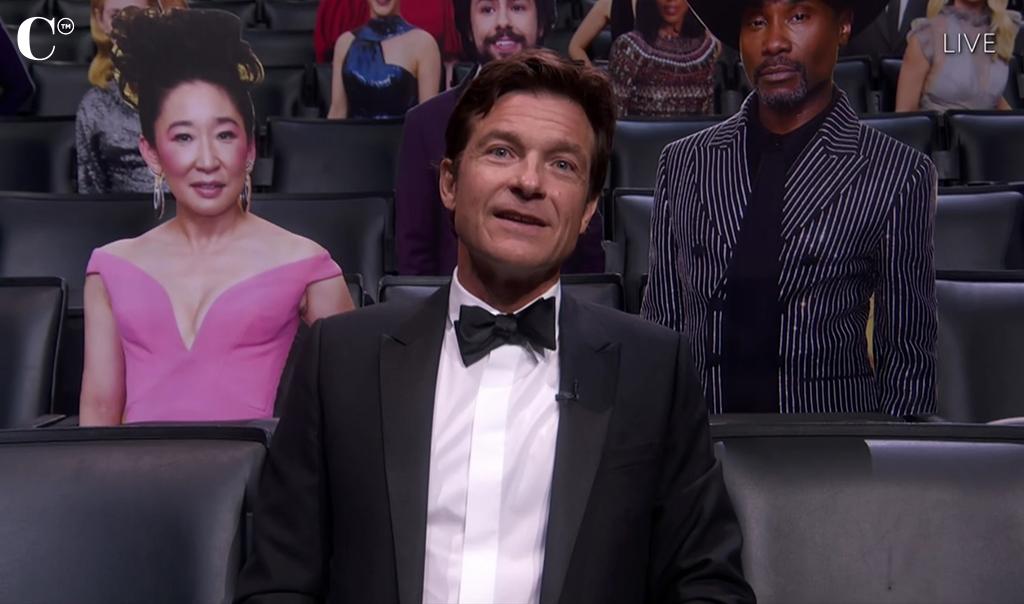 Things got a little awkward when Bateman was announced as the winner for Guest Actor in a Drama Series, but he actually didn’t take home the award. Although it said Ron Cephas Jones‘ name on the screen, the announcer said, “Jason Bateman as Terry Maitland, The Outsider.” After that, it quickly cut to commercial break, and when the show returned, the words, “Our apologies, an incorrect winner has been announced. We’re fixing it now. Please don’t go away,” flashed across the screen. Oops!

Cephas Jones ended up actually winning the award, and he also made history by becoming part of the first father-daughter duo to take home Emmys in the same year! Yep, his daughter, Jasmine Cephas Jones (who fans may recognize from Hamilton), also won an award.

There Was An Epic ‘Friends’ Reunion

Yes, you did read that right! The cast of Friends reunited at Jennifer Anniston‘s house, and seeing them together again was seriously a dream come true. Courteney Cox and Lisa Kudrow both came over to watch the awards show with her, and when the camera showed them all hanging out, we were seriously living for it. 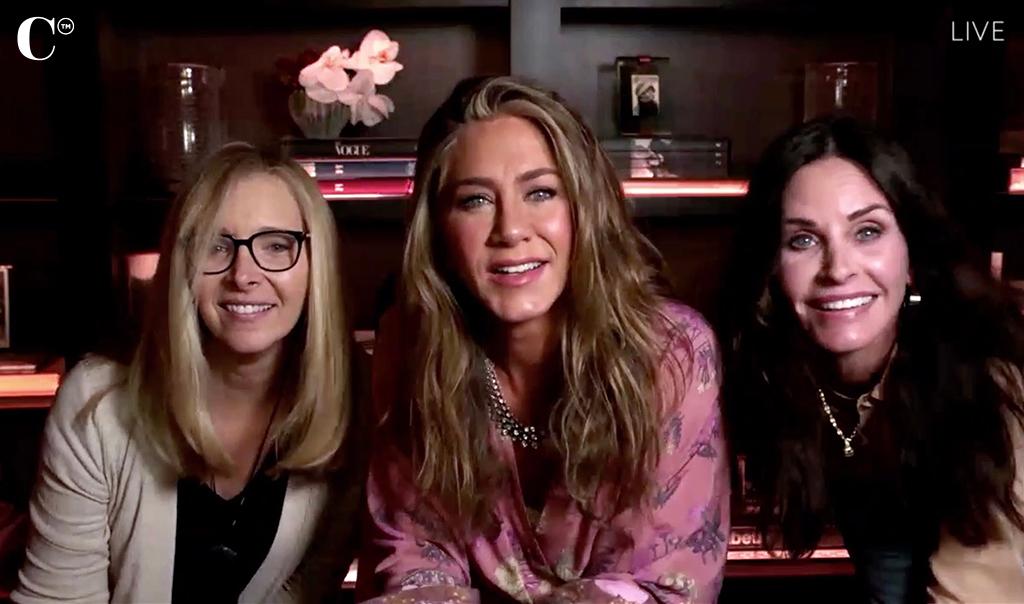 The Crew All Wore Hazmat Suits

Although most of the awards show was virtual, the people that were there in person — like the men and women who physically gave out each trophy — wore legit hazmat suits to protect themselves amid the pandemic!

The Celebrity Outfits Were Breathtaking

And despite most of it taking place from the comfort of their homes, the stars still got all dressed up for the event, and they looked amazing! Just take Zendaya, for example. The former Disney star actually wore two stunning looks throughout the night. The first was a black-and-purple dress from Christopher John Rogers’ Fall Winter 2020 collection. The second was a sparking custom polkadot dress from Giorgio Armani Prive, which she totally rocked.

Tracee Ellis Ross donned a ruffled Alexandre Vauthier dress (complete with a matching mask), while Yara Shahidi looked beautiful in her custom Prada outfit. As for Kerry Washington, she had one of our favorite looks in a Dolce & Gabbana dress. Earlier in the night, she also rocked a Oscar de la Renta floral and strapless gown.

The Stage Was On Fire — Literally 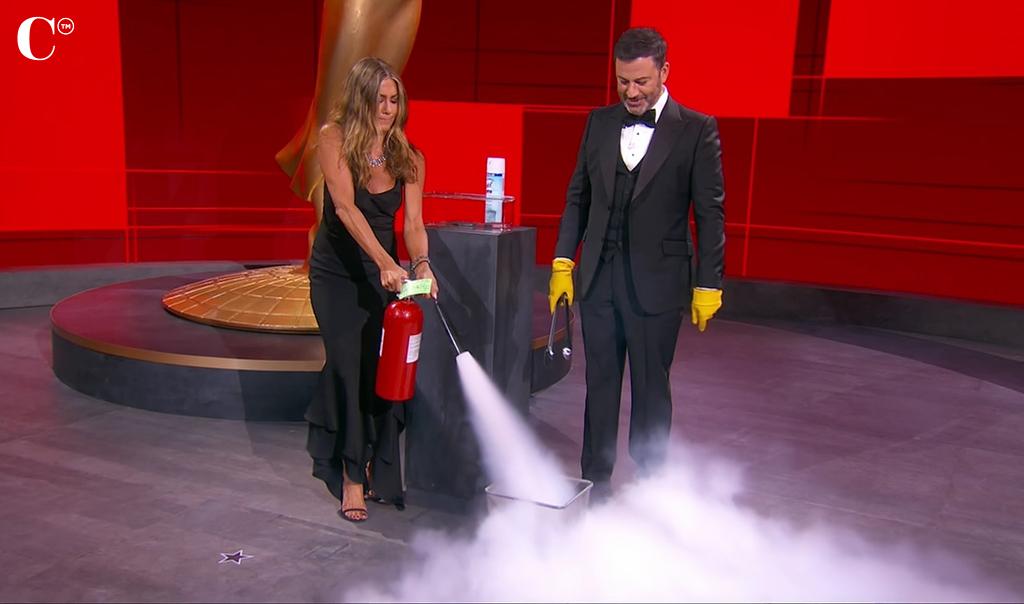 At one point during the night, host Jimmy Kimmel set the stage on fire as part of a joke, and he and Anniston had to work together to put it out! But things got a little scary when it didn’t want to go out. Thankfully, no one got hurt!

But that’s not the only surprise of the night. There was also a live alpaca that made a special appearance on the stage! Yep, Randall Park presented the Emmy for Outstanding Writing for a Limited Series or Movie, and he brought out the animal, with no explanation!