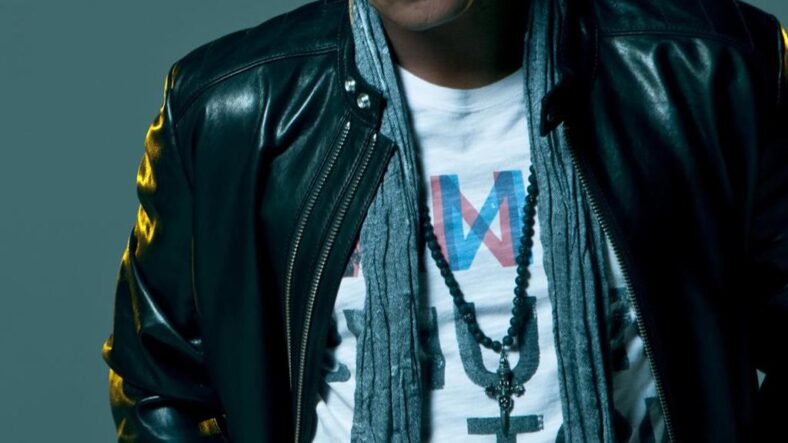 It’s been just over three months since news broke that famed DJ and nightlife superstar Erick Morillo was found dead from a drug overdose. Just before his death, Morillo was facing accusations from fellow DJ Kristen Knight and an unnamed woman who claimed Morillo sexually assaulted them. Morillo was arrested in August, although he denied the accusations. Now Knight has opened up with Dr Mehmet Oz about what happened that night and what Morillo was like behind closed doors.

Who is Kristen Knight and How Does She Know Roger Sanchez? 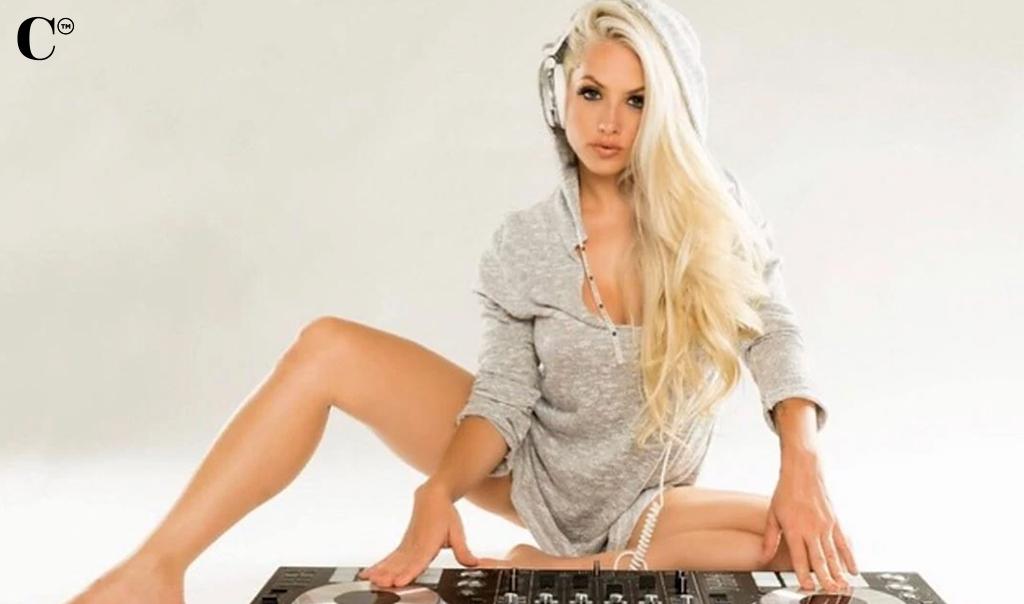 Central to the accusations against Morillo are one woman: Kristen Knight. A fellow DJ, Knight’s biography reads, “Kristen Knight is a Miami based, international Dj and producer. Her empowering presence, extreme technical knowledge, and upbeat, dirty, melodic, house sets have taken her across the globe sweeping up one dance floor at a time.

Highly influenced by her cities’ iconic night life, and years of playing Florida nightclubs her love for house music led her to become creative technically while on deck still reading a crowd and delivering a journey creating one of a kind spontaneous impromptu live mashups never heard before or ever again.

Growing up as a dancer and a singer in south Florida Kristen’s path led her to the nightlife industry where she found a place where she felt accepted and free to be an artist.”

Knight is also the girlfriend of DJ superstar and award-winner Roger Sanchez, who often worked with Morillo. Knight has known Morillo since 2015.

Warning: the following segments contain information relating to sexual assault that may be disturbing to some readers

What Kristen Says Happened That Night

Oz questioned Knight about what happened the night she says Morillo assaulted her and another woman. OK! Magazine reports, “‘You say you worked a gig with Morillo in December of last year, could you tell us what happened afterwards?’ Dr. Mehmet Oz. asked Knight on the Tuesday, December 8, episode of his show, The Dr. Oz Show.

‘I opened for him and the gig ended at about 8, 9, in the morning,’ she shared. ‘After that, we were all hanging out with a big group of people, but he was with another girl who I had befriended that night. They were like, ‘Oh, you should come back to the house with us.’ I was like, OK, we all went over there. As soon as I got there, it was like Dr. Jekyll and Mr. Hyde.’”

In the intervening time between speaking on Oz’s show, Knight’s name has exploded across social media and she’s felt the need to more thoroughly explain her experience to combat the misinformation and bullying campaigns being launched against her.

In an interview with DJ Mag, Knight cleared up the sequence of events as she recalls it. After she and the unnamed woman arrived at the house and Morillo’s behavior changed, Knight explains that things went from bad to worse.

“‘He started questioning my motives, asking why I was there and if I had problems with my boyfriend,’ Kristen says. ‘It was like getting caught in the web of a spider.’

Kristen says she brushed off Morillo’s advances and stayed for a while, having a beer and swimming in the pool. A short while later, she reports Morillo became inappropriate again – before grabbing her face with both hands and trying to kiss her. She got out of the pool, got dressed and told the other woman she was leaving. She booked an Uber and made her way outside to wait for it.

‘I was outside, waiting for my Uber, and Erick came outside onto the street. He was naked, with a towel in his hand, crying and apologising,’ she says. ‘I was genuinely concerned and I felt bad for him. I covered him up and walked him back to the outer perimeter of his house. He cried on my shoulder for like half an hour, telling me how difficult his life was and doing whatever he could to get sympathy. He managed to convince me to go back inside the house.

‘Erick gets a lot of sympathy from people who say things like ‘he was troubled, he was a drug addict, he had problems’ – it was that same sympathy that put me in a position to become a victim of his. He used that.’” 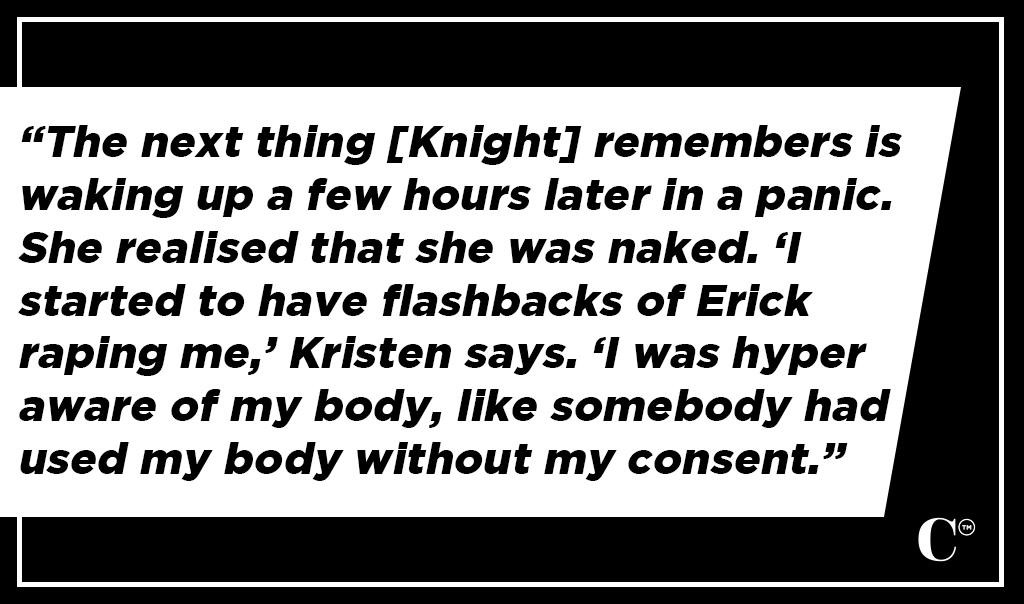 Feeling sympathy for Morillo, Knight recounts that she returned inside. The other woman fell asleep on the couch, and Knight and Morillo played on the DJ deck together for awhile. Soon, however, Knight says she began to feel a lot more disoriented than her drinks should account for. Knight says she had only had two beers, but was too out of it to call an Uber and barely managed to climb into a bed with the intention of sleeping it off.

Knight told DJ Mag, “The next thing [Knight] remembers is waking up a few hours later in a panic. She realised that she was naked. ‘I started to have flashbacks of Erick raping me,’ Kristen says. ‘I was hyper aware of my body, like somebody had used my body without my consent.’ She describes the feeling as ‘this hyper awareness of somebody being there, like somebody has broken into your house.’

Kristen sat up and saw Morillo in the room, also naked. ‘I started yelling at him and asking him why I was naked. He said nothing had happened. I freaked out, threw my clothes on and ran downstairs.’

Kristen managed to get out of the house and initially called an Uber because she ‘just wanted to get away’. She then decided to call the police instead to report the incident. ‘I thought about my daughter, and I thought ‘I don’t want to be that woman who 20 years from now says ‘oh yeah, that happened to me’,’ she explains.”

Knight did submit to a rape kit test which was positive for Morillo’s DNA, directly refuting his claim that, “nothing happened.” It took eight months to return results. However, it wasn’t long before Knight became the victim again – this time of a sustained bullying and discrediting campaign. Morillo called mutual contacts and business contacts and said she was accusing him of rape, and soon people came out of the woodwork to try to discredit her and cast doubt on her accusation. Knight said it was agonizing waiting for the test kit results while Morillo jet-setted around the world and she worried he may be victimizing others.

Per Knight’s interview with DJ Mag, “People then started contacting me, telling me Erick had called them and told them I was pressing charges. I think he was trying to damage my reputation so people wouldn’t believe me.’

Kristen says her name was quickly leaked as the accuser as a result of this, leading to abuse online that was ‘incredibly traumatic’ for her. ‘People were going on rants about my personality, about who I am. It was a very difficult few months.’

Kristen says she has also been contacted by a number of women who say they were also survivors of Morillo’s predatory sexual behaviour – and is ‘sad but not surprised’ by this. ‘We do not live in a place that is safe for women to come forward as survivors of sexual assault,’ Kristen says.”

Knight felt as though the industry turned its back on her, preferring to keep things serene on the surface even if it meant letting her suffer without support. People Knight assumed were friends sometimes took his side, but most were simply silent.

Morillo was arrested on August 7th, 2020, and charged with sexual battery.

“I Took it as a Sign to Keep Going” 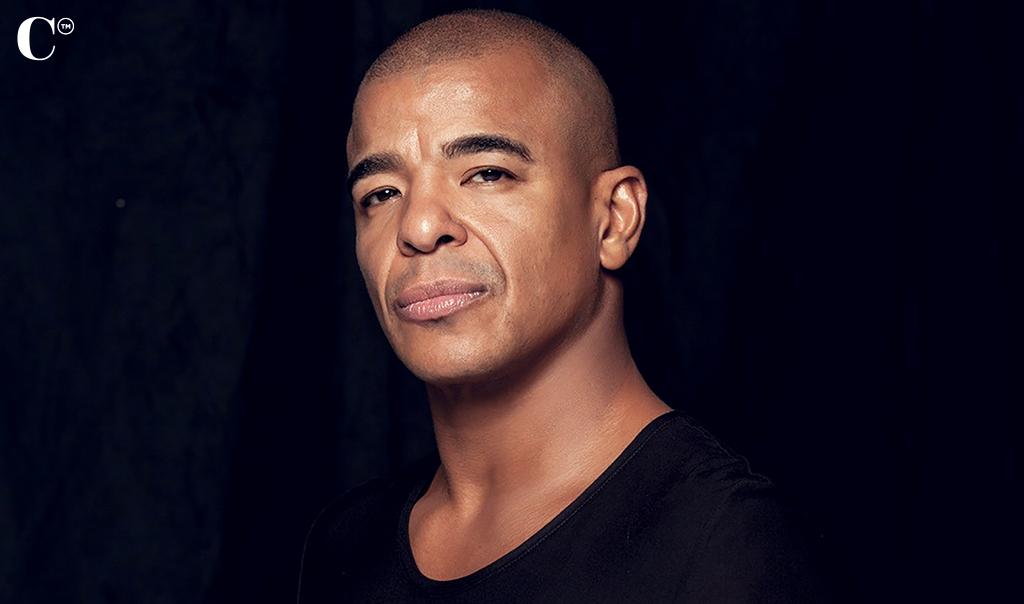 Knight explains that she was suicidal over the trauma she experienced and the subsequent fallout of her entire professional circle branding her persona non grata. Knight told MixMag that she and Sanchez were on a vacation together when the news of Morillo’s death reached her.

“‘I couldn’t enjoy myself on a rollercoaster or having lunch or watching a show, I was like, that’s it. My life is done. I can’t live with the anxiety anymore,’ she says. Driving back from Orlando to Miami, Knight contemplated ending it all.

Then her friend called and told her to pull over. Erick Morillo, her rapist, was dead. Knight had been due to face Morillo in court in three days time. Now, she wouldn’t have to.

‘I couldn’t believe that I had been considering ending my life, to find out that Erick’s life had ended instead,’ she says. ‘And I took that as a sign to keep going and to talk about it when the time was right.’”

3 days before Morillo was due to appear in court, he was found dead. Although the death was ruled an accidental overdose due to Ketamine, the timing is suspicious.

Morillo had long battled an addiction to ketamine, and he spoke about being in its grips. He lost a chunk of his arm after ketamine injections caused a dangerous infection, and in an interview in 2016, Morillo explained how he fell down the path; “Younger DJs coming through and achieving success had a substantial effect on his mental state, setting him on the road to addiction.

‘My ego couldn’t take that I wasn’t the top dog anymore. That’s when things started to unravel.’

Alcohol was another of his vices, saying it got so bad ‘I wasn’t talking to anybody and I didn’t want anybody to see me.’

He also spoke of his three visits to rehab and discussed his lowest points, including being arrested three times, being banned from British Airways for ‘leaving something in the bathroom’ and losing the ‘love of my life’, whom he got divorced from after a short-lived marriage.”

Although Morillo successfully stayed clean for a time after his third rehab stint, he had fallen off the wagon again, which proved fatal. On September 1st, Morillo was found dead in his home, rocking the nightlife music industry across the country.

Ketamine has become increasingly popular as a recreational party drug and some DJs have spoken about their experience of DJing while under the influence of, “Vitamin K.” In one survey, as many as 25% of college students admitted to trying Ketamine as a party drug. 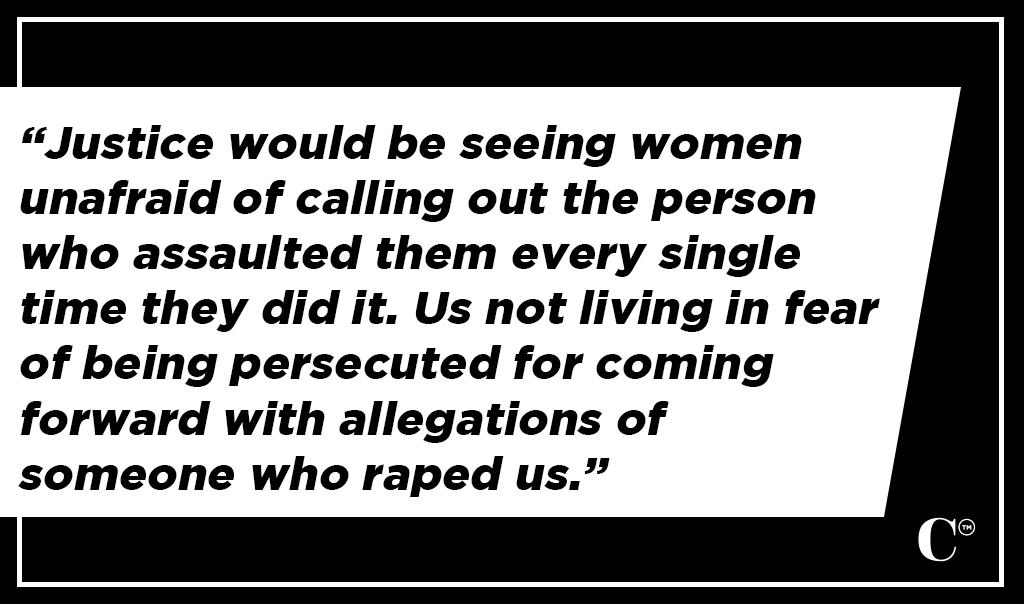 Although she has suffered both professionally and personally after speaking out about what happened with Morillo, Knight feels compelled to keep fighting. After Morillo’s death, 10 women accused him of assault, with accounts and testimony spanning 30 years.

Knight told MixMag that she was tired of the fear and silence culture that hangs over sexual assault. Women are afraid of accusing men of assault, afraid of what they’ll lose for being honest about what they’ve suffered. Knight believes that, having been robbed of her chance to confront Morillo in court, sharing her story so that others can feel brave enough to come forward may be her best path to healing and overcoming what he took from her.

In her interview with MixMag, Knight explains, “A conventional path to justice was snatched from Knight when Morillo died, never to face court or go to jail for his crimes. But she celebrates small victories, such as when Morillo’s friends and supporters take down their tributes on social media, and now, when she’s telling her story publicly for the first time. ‘This is healing for me, and healing is a huge part of my life every day,’ she says.

‘Justice would be seeing women unafraid of calling out the person who assaulted them every single time they did it. Us not living in fear of being persecuted for coming forward with allegations of someone who raped us,’ she says. ‘It’s so important for women to come forward if they’ve been sexually assaulted, because if not, this is what we get — thirty years of a serial rapist on the loose.’”