Those watching The Real Housewives of Beverly Hills this season have seen a lot of the drama start to surround Housewife Denise Richards and former Housewife (and current “friend of the Housewives) Brandi Glanville. While the two were seemingly friends up to this point, Glanville dropped a bombshell in last week’s episode, detailing the fact that she slept with Richards and Richards’s husband, Aaron Phypers, did not know. While Richards has denied the affair, Glanville has stuck by her story, explicitly stating she is NOT a liar. Now, we have exclusively obtained an exclusive text exchange that took place between Glanville and Richards after the cast trip- and, they are definitely going to add some fuel to this ongoing fire.

What Did Brandi Say?

In last week’s episode, Glanville is over Kyle Richards’s house (along with Teddi Mellencamp and Kim Richards) when she details what went on.

“We got to the restroom and all of a sudden we’re making out,” Glanville shares of when she was at a dinner with Richards. “I was not expecting it but I was like, ‘Alright, I’ll go with it. I’m wasted. You’re pretty. Let’s do this.’”

Then, Glanville alleges that Richards invited her to stay with her for two nights in a home (out of town) where Richards’s daughter and her daughter’s friend were staying.

“That first night the girls were sleeping downstairs with the door and Denise had a room upstairs,” Glanville revealed. “There was no rollaway bed, conveniently. And so I just slept in the bed with Denise. The first night I was there, we just had a good night. We were hanging out and the next night we got really drunk and we were so f**ked up and we kind of hooked up.”

When pressed for details regarding how involved their hook-up got, Glanville explicitly stated that she and Richards did “everything.”

Glanville also revealed that Richards was very adamant she not tell Phypers, explaining that Richards said Phypers would kill her.

“I would have never slept with Denise if I thought that Aaron was not okay with it and he knew I was going out of town with her,” Glanville goes on to explain, “he knew I had made out with her before.”

“There was no question in my mind that Aaron was okay with all of this,” Glanville added.

It should be noted that Glanville also revealed to the women that Richards had told her that she and Phypers had an open marriage.

While watching the scene, it was blatantly clear that Glanville seemed uncomfortable and emotionally shaken by sharing what went down.

In an interview with The Washington Post last week, Richards responded to the affair allegations.

“I did not have an affair,” Richards explicitly stated in this interview. “There’s definitely consistency with the subject matter that comes up on this ‘Housewives’ season, and that’s all I’ll say.”

While Glanville has held steadfast to her claims that she is not lying and this will all come out, last night she took to Twitter to out a text message from Richards. 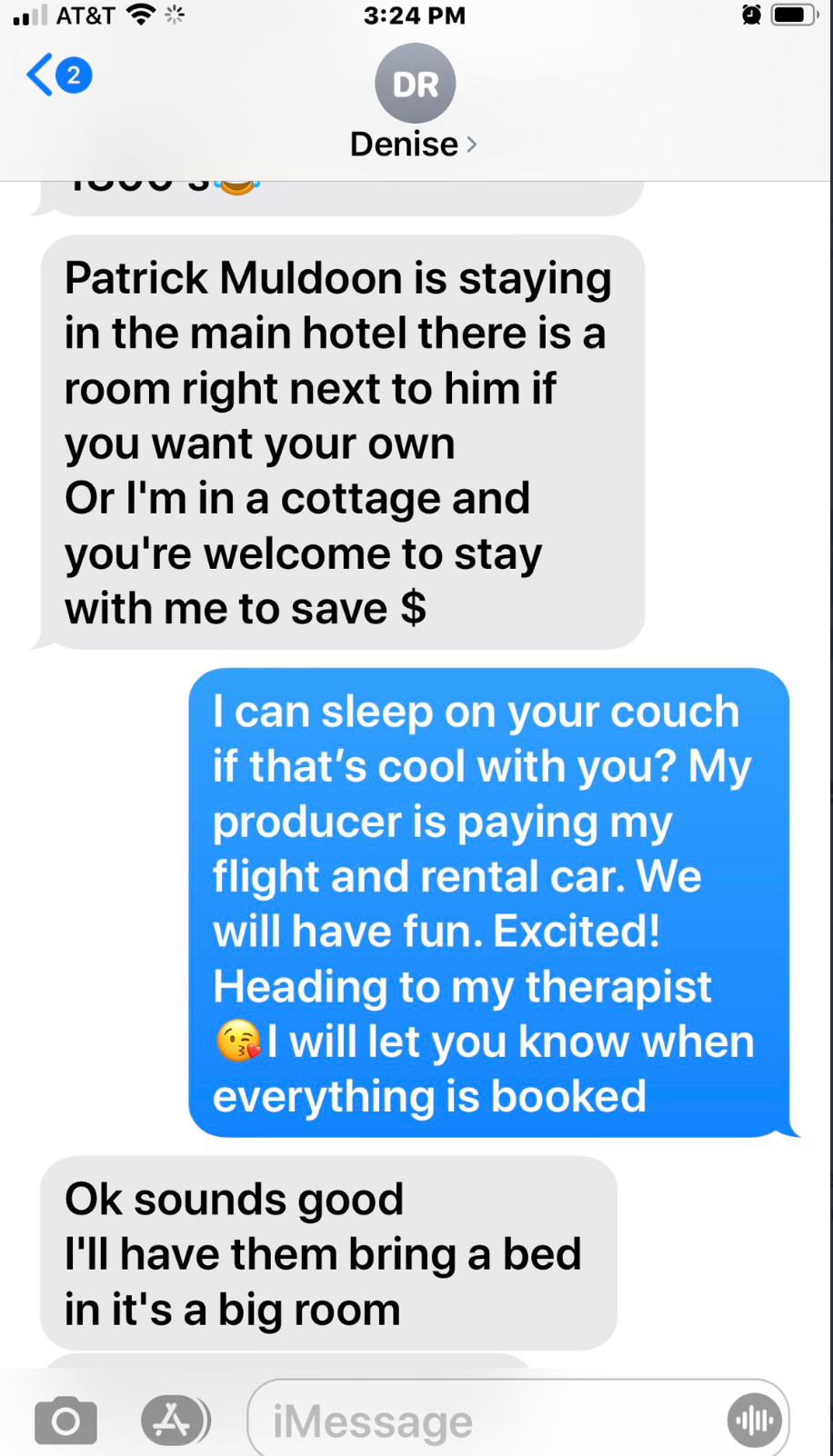 “Patrick Muldoon is staying in the main hotel there is a room right next to him if you want your own Or I’m in a cottage and you’re welcome to stay with me to save $,” Richards writes in the text to Glanville.

“I can sleep on your couch if that’s cool with you?” Glanville responds. “My producer is paying my flight and rental car. We will have fun. Excited! Heading to my therapist. I will let you know when everything is booked.”

Then, Richards responds “Ok sounds good I’ll have them bring a bed in it’s a big room.”

Glanville mentioned on the show this past week that she thought there would be another bed put into the room, but Richards and she ended up sharing a bed.

Today, Celeb obtained more exclusive text messages between Richards and Glanville from an insider close to The Real Housewives of Beverly Hills. The texts have not been released anywhere, and interestingly NOWHERE in the texts does Richards deny that they did anything.

These texts were made after the cast trip (which will begin airing this coming week). Glanville was not present on the cast trip, but Richards was, and this was where the other women confronted her on the affair Glanville had confided in them about.

The text messages begin with Glanville writing, “First & for most It was never my intention to speak about it because I was ashamed and I had guilt and you will see that, first you make me into a cheater Something I would NEVER KNOWINGLY be involved in.”

“We could have had a conversation about it and put all this to sleep,” Glanville continues, “but then you go to Rome tell everyone crazy lies about me and call me a liar. So now I’m not just a cheater but I’m a cheater and a liar thank you Denise.”

“I have to explain this to my children,” Glanville added. “I have nothing more to say to you right now.”

Richards then responds, “Brandi do you really think I would ever do that? And that is news to me.”

“I have never even heard this,” Richards continues. “I don’t know what they told you but that is an absolute lie. I never brought your name up to any of them and at Bravocon I spoke very highly of you.”

Richards still had more to add, continuing stating that “I don’t know what these women are telling you one thing and me something else. And can cause problems with both our families.”

“I really hope we can talk,” Richards elaborates. “I’ll tell you everything and you’ll know because it was all on camera when they told me all this stuff and I’ll share my response to it with you.”

“I was shocked at the stuff they had said,” Richards then notes.

Then, Richards interestingly goes on to state that “There is still time that you and I can fix this so our families don’t have to endure this bullsh*t.”

“It’s apparent that you & I are scapegoats for their drama at the potential expense of our kids,” Richards wraps with dying. “You & I are easy targets because we’ve been open about certain things on the show & it’s not cool at all. They do not care about our children and families and they’ll stop at nothing.”

What’s most interesting is the fact that nowhere in these texts does Richards deny doing anything with Glanville, and she seems most concerned about fixing things so their families don’t have to deal with this.

After obtaining these messages, we reached out to Glavnile to confirm their validity and see if she would comment about them.

Confirming these are indeed real, Glanville shared with us that “A lot of people have these text I’m not sure how these got out, but after I tweeted a few yesterday a lot of magazines and bloggers have been hitting me up asking questions so here is my statement”