The Facebook ad ban crisis has left Mark Zuckerberg desperate after a $56 billion stock market plunge in share prices and an estimated $60 million loss in revenue.

At the time of posting over 160 companies, including major brands such as Unilever, Coca-Cola, Starbucks, and Levi Strauss, have announced they’re pulling advertising from Facebook and other morally questionable social media platforms. 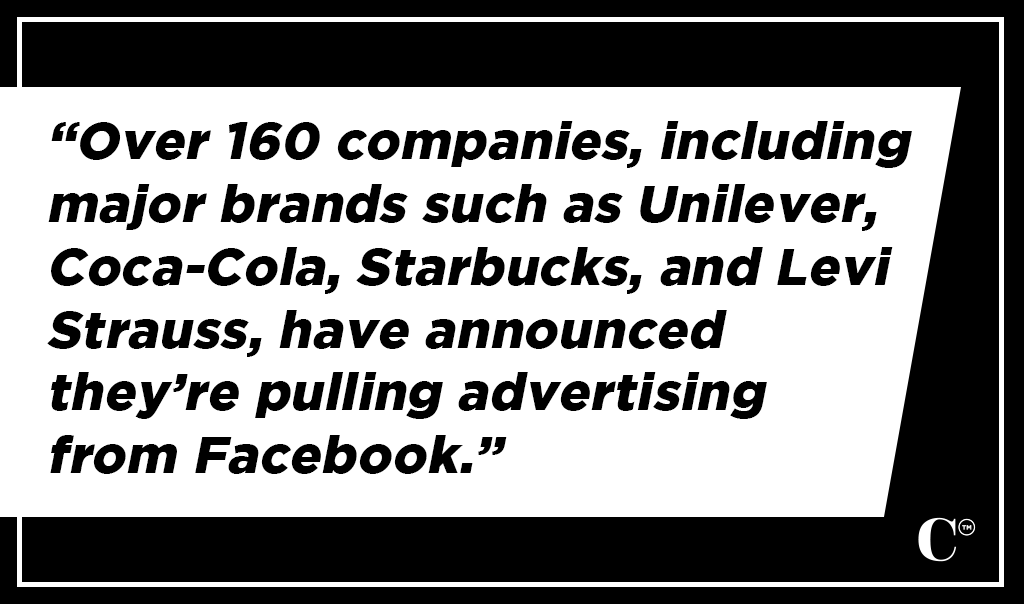 Facebook has been under fire for years now over accusations that its lax and sloppy content moderation has led to the spread of hate speech and propaganda around the globe.

The social media giant was named and shamed as being one of the major players behind Hillary Clinton‘s presidential defeat, with an anonymous executive claiming a 2016 Facebook ad campaign led to Donald Trump‘s win.

In addition, Zuckerberg was forced to answer questions from 44 senators during a cringe-worthy hearing by the Senate Judiciary Committee, the Senate Commerce, and Science and Transportation Committee.

The hearing was sparked by news of the Cambridge Analytica scandal, which laid bare Facebook’s highly questionable data-sharing procedures. Zuckerberg’s testimony resulted in the launch of a criminal investigation by federal prosecutors, and scrutiny from the Federal Trade and the Securities and Exchange Commissions.

However, despite the CEO’s feeble vows to take out the trash, Facebook has continued to allow a steady flow of hate speech, propaganda memes, and downright fabricated politically biased content to be posted on the site. 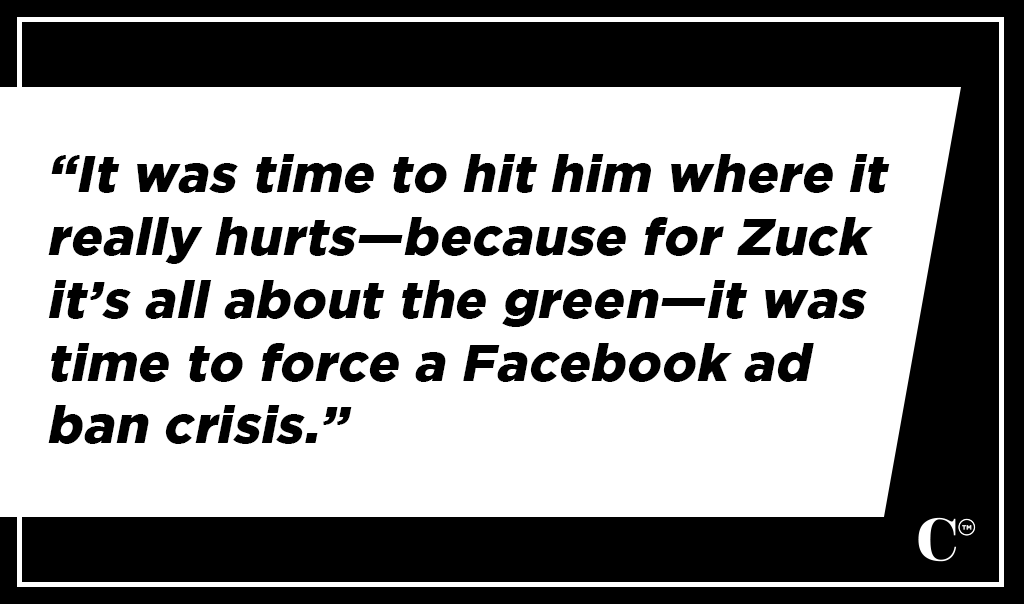 Zuckerberg clearly didn’t care about Senate hearings or pending criminal investigations though, and why should he? It’s been blatantly clear right from the start that the 36-year-old’s driving force is adding yet further to his billion-dollar bank balance.

It was time to hit him where it really hurts—because for Zuck it’s all about the green—it was time to force a Facebook ad ban crisis.

Last year, Facebook reported $70 billion dollars in income, with 98 percent of its revenue coming from advertising. “We had a good quarter and a strong end to the year as our community and business continue to grow,” Zuckerberg announced in their financial report at the end of 2019. “We remain focused on building services that help people stay connected to those they care about.”

Haha. Thanks for your selfless sacrifice, dedication, and service to the public Zuck. However, it turns out we’re not all just a bunch of schmucks and we certainly aren’t buying your BS.

Advocates launched the Stop Hate for Profit campaign, and it wasn’t long before Ben and Jerry’s, Patagonia and Verizon jumped on the bandwagon. But it was when brand giant Unilever got on board, that the Facebook ad ban crisis really started hitting hard.

The father-of-two announced the company would be following in Twitter’s footsteps and introducing a new policy of labeling “questionable content”. However, Zuckerberg was clearly still not grasping the gravity of the situation, as he announced, “This is not a judgment of whether the posts themselves are accurate.”

So yeah, we’re still not buying it Zuck.

READ MORE:Pedophile Jeffrey Epstein may be “dead” but where’s his “Madam” Ghislaine Maxwell? Do authorities even care?

More importantly, Zuckerberg’s major source of revenue isn’t buying it either, with Coca-Cola, Hershey, Honda, LuLuLemon, and Jansport among the many others joining the campaign and deepening the Facebook ad ban crisis.

It’s safe to say Zuck’s weekend must have really sucked, as the brands just kept on adding to the Facebook ad ban crisis—culminating in Starbucks, Facebook’s sixth-largest advertiser, announcing on Sunday that it was suspending all social media advertising.

It’s also safe to say that the Facebook ad ban crisis is far from over, as more and more brands continue to announce they are suspending their social media advertising.

The Stop Hate for Profit Campaign was launched in the wake of the Black Lives Matter protests over the police killing of George Floyd.

The movement wants to force Mark Zuckerberg to be held accountable for the continued spread of hate speech and misinformation on Facebook—and guess what? They don’t buy his phony claims of a policy change either.

“We have been down this road before with Facebook,” the group announced in a statement. “They have made apologies in the past. They have taken meager steps after each catastrophe where their platform played a part. But this has to end now.”

The Stop Hate for Profit Campaign is supported by a slew of civil rights groups like the NAACP, the Anti-Defamation League, and the Color of Change.

And watch out world! They’re not just stopping with USA advertisers, the organization has vowed to take their campaign global.

It looks like Zuckerberg’s already crap week just got a whole load crappier—is this the beginning of the end of Facebook as we know it? Buckle up Zuck, you’re in for a bumpy ride…..