Earlier in the year, Farrah Abraham was arrested for battery after an issue at a nightclub got out of hand.

Earlier in the year, Farrah Abraham was arrested for battery after an issue at a nightclub got out of hand. Reports state that the former Teen Mom star slapped the security guard on shift and continued to escalate.

The paramedics were called and later the cops were called for backup. The report also stated that someone made a citizen's arrest which people assume to have been the guard. Abraham was then taken into custody. After being released she shared a statement online with a video of the incident to explain her side of things.

Captioned beneath a video of the incident was, "I post this as no woman or man should ever be battered, abused, conspired, ganged up on, set up, recorded, and video sold. I'm putting a restraining order on @antonelloparloto who made this dinner reservation and conspired an attack on myself with the staff at @grandmaster_recorders as it was a 'private persons arrest' complete setup." The post continued, "I've had a very traumatizing year and I don't deserve to be attacked, bruised, men on me, and battered… As a single mother to be harrassed, battered, and conspired against as a paying customer @grandmaster_recorders should fire their management and security for all contributing to attacking 1 person out of 3 people."

Abraham expected to receive a "get out of jail free" card but, life isn't a board game and it looks like the reality star will be facing charged after all.

In a now deleted Instagram post, Megan Armstrong, the security guard that Abraham attacked, shared a series of photos with a caption explaining her side of things.

“Allegedly, I’m so tired of these celebrities thinking they can do whatever to me. You put your hands on me for doing my job, I won’t let this go. I work very hard, I’m in my last few months of school (bachelors program) and I take care of my mom who has cancer," wrote Armstrong.

She continued, "I have no time for jail which I why I handle this professionally, on top of that I’m black. If I would’ve beat this lady up, I would be going to jail, and lose my job, I have way too much to lose. What’s so crazy is it’s MLK weekend, I’m speaking up enough is enough."

"Literally I thank god for changing me, years ago I wouldn’t care hands would be thrown yet I’m older now, I’m 32 years old. I don’t need to be in anyone’s jail house tbh. I thank god for saying 'no' Megan don’t do it."

Armstrong concluded, "What’s annoying is walking around, or just going to work, its the worst, I’m proud of myself for not feeding into my old demons and fighting this woman, yet I’m ashamed because I’m walking around with a bruise on my face. Just embarrassed because I look like a punk. People already look at me weird because I’m blind in the same eye she hit me in and my eye sometimes have a mind of it’s own. Now I have this bruise. Ugh lord help me."

Farrah Plans To Fight Back? 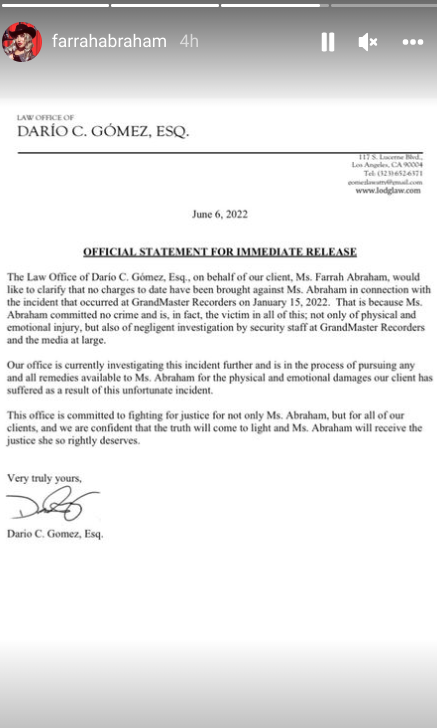 Farrah shared her plans on her Instagram Story, "My attorney Kia Feyzjou is monitoring the case, and, as of today, no criminal charges have been filed against me, and if they choose to, we will aggressively defend against these 'frivolous accusations." 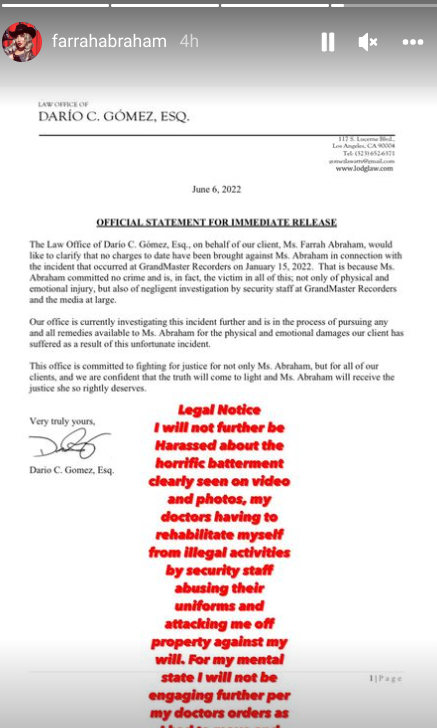 Starcasm reported that Abraham has officially been charged for Battery and is scheduled for an arraignment.

The outlet also revelaed that Battery on a police officer can become either a misdemeanor or felony charge, depending on "how much hard was done to the police officer," and in this case, Armstrong, the security guard.

Cleaning Up Her Act

Besides her past sneaking back up on her, Abraham has been sharing her personal progress to Instagram regarding her mental health improvements, following that night out at the club.

The mom of one recently celebrated her 31st birthday in Hawaii with her daughter, Sophia. Celebrating a new year of life, she wrote on Instagram, "To my 31st, The one I've been waiting for… she's here. sobriety, healed & blessed, the best gift in the entire world @sophialabahram"

Abraham has been open about her mental health struggles following her assault arrest for allegedly slapping a security guard outside a bar. She completed a 28-day stint in rehab in March to help deal with her trauma and has been working on herself since.

Will this new charge on her record be a set back? Or, will Abraham continue to choose the high road?