When you picture someone to head the private sales division of a world-famous art auction house, a former banker is 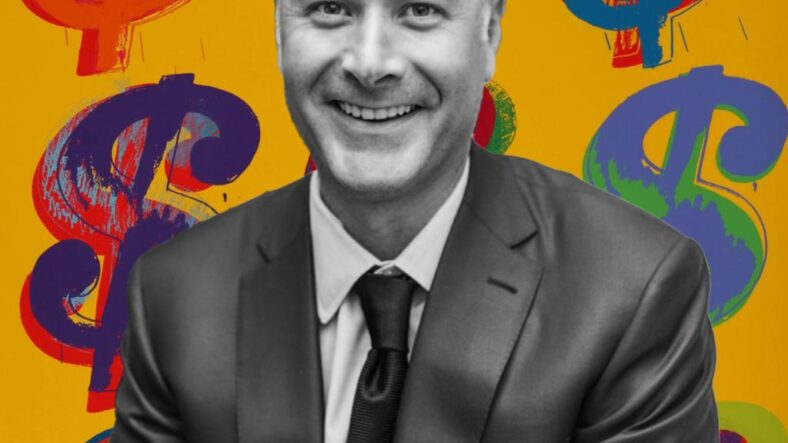 When you picture someone to head the private sales division of a world-famous art auction house, a former banker is probably not the first person who springs to mind. While experts in money and the handling of money, the nuances of business sales and especially high art sales like Sotheby’s is not usually within their realm of expertise. So when Sotheby’s tapped former banker David Schrader to head their private sales division, eyebrows were raised. However, Schrader quickly proved faith in him well-founded as private sales soared immediately under his leadership.

Who is David Schrader? 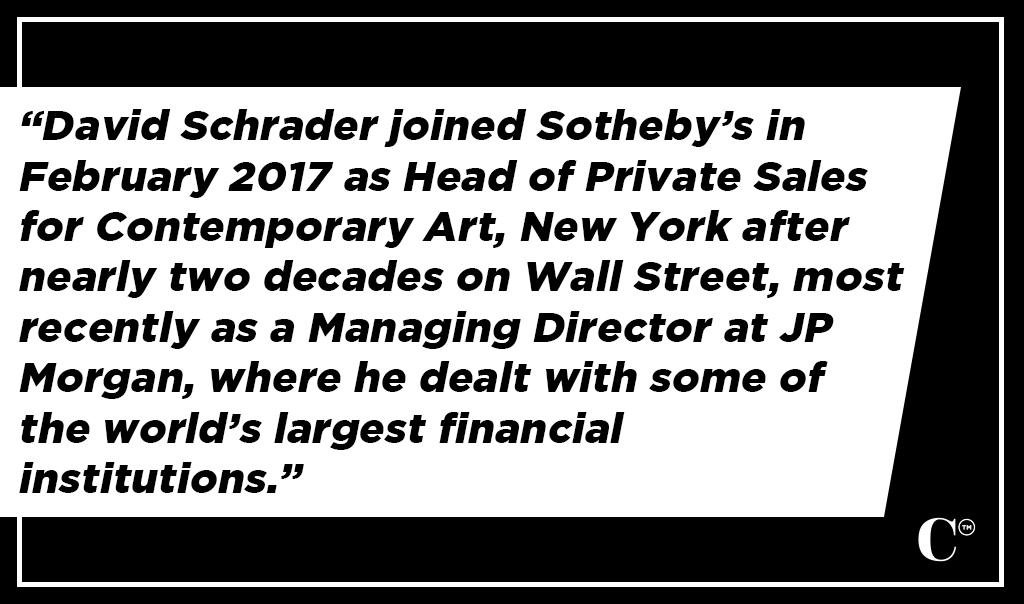 Schrader is a shrewd businessman and experienced banker. With more than two decades of experience on Wall Street, Schrader came to Sotheby’s with an impressive portfolio of contacts and an appreciation for the way big sales shape business futures.

Sotheby’s profile of Schrader reads, “David Schrader joined Sotheby’s in February 2017 as Head of Private Sales for Contemporary Art, New York after nearly two decades on Wall Street, most recently as a Managing Director at JP Morgan, where he dealt with some of the world’s largest financial institutions. During that time, he also established himself as a respected collector of Post-War and Contemporary Art. In his role, Mr. Schrader works with Sotheby’s global Contemporary Art team, bringing his perspective and acumen as a sophisticated collector.”

A former Bear Stearns employee, Schrader has always had a passion for art, which made him uniquely poised for the Sotheby’s position. “Mr. Schrader began his career on Wall Street at Bear Stearns in the late 1990s and bought his first work of art around that same time. His professional path took him to Credit Suisse before JP Morgan, where he spent the last five years. Mr. Schrader’s interest in collecting grew as he built a successful career in finance, and his market intelligence is particularly deep in regards to Contemporary artists including Josef Albers, Mark Grotjahn, Yayoi Kusama, Sol Lewitt, Gerhard Richter, Ed Ruscha, Rudolf Stingel, Andy Warhol and Christopher Wool, among others.”

When Schrader took the reins in 2017, all eyes turned to him to see if his leadership would prove fruitful. It most certainly did, and in 2018, private sales reached a 5-year high, with house profits topping $1 billion. Schrader repeated his magic in 2019, boasting over $1 billion again. The success has continued, despite the blow 2020 continues to deal to businesses across the world.

How Schrader Came to Sotheby’s 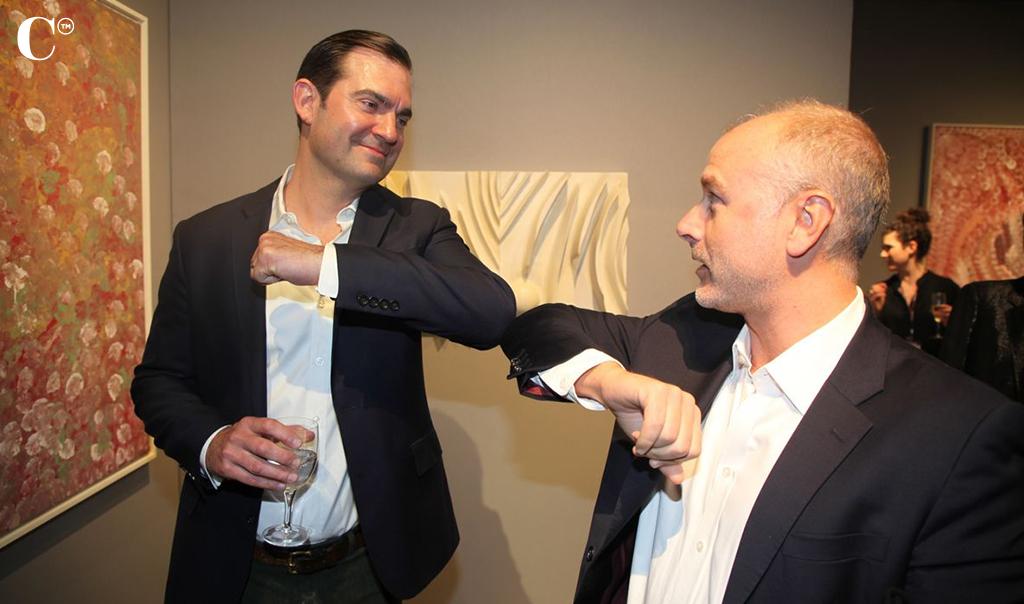 ArtNews reports on how Schrader came to his position and why he made the choice to take a giant career leap. “‘It was sort of a vision,’ Amy Cappellazzo, the head of Sotheby’s fine art department, told Artnet News regarding Schrader’s hire. ‘I was at a client’s house for dinner, and I remember being very ill with a cold, and I had taken some cold medicine, which I don’t do very often, and I got this kind of hallucination that I should hire David Schrader to run private sales.’

As Schrader told it to ARTnews, ‘I got a couple texts from her on a Sunday night at 10 p.m. I was lying in bed, and she’d been at a dinner party at a collector’s home and sitting next to another collector who recounted that I had helped him buy something and sell it for a big profit, and roll that into something else, and that we should really talk.’

By that time, Schrader had become very serious about collecting, beginning with an interest in the 1980s-era Pictures Generation, and would stay up at night thinking, “how do I trade these four things into a better Richard Prince, or a Christopher Wool, or a Cindy Sherman. That’s what got me thinking about pricing and the nuances of different works and knowing artists in great depth.”

The day after he heard from Cappellazzo, he canceled his meetings on Wall Street and went up to Sotheby’s. He recalls saying at the time, ‘you guys know what I bid on and you know what I own. No one ever calls me and says, ‘We have someone who is interested in something you have—would you be interested in selling?’ Or ‘we know you underbid this—you should look at this other example.’ ‘ As he saw it then, ‘the auction houses were selling art six days per year per category. Why weren’t [they] acting in a more advisory capacity?’”

An Unlikely Marriage of Success

In 2020, Schrader has continued to provide Sotheby’s with success, despite the unlikely landscape. With museums and galleries closed from the pandemic, private sales have remained a lucrative avenue for many. Schrader came up with the idea to collaborate with galleries to launch digital sales for pieces under $150,000, adjusting to the format necessary to thrive in 2020.

Schrader’s innovative partnerships proved profitable for galleries struggling to make ends meet with their doors closed, and Sotheby’s has posted a profit similar so far to 2019’s, despite the odds.

Per Artnews, “The pandemic brought a moment that has made Schrader ‘the most collaborative I’ve ever been with dealers,’ he said. ‘And it’s working both ways. They are coming to us and saying, ‘We have a client looking for X, can you help us find it?’ There’s a camaraderie we haven’t seen before, and some of the boundaries and competitive ways have, for the moment, gone away.’

Opening a space in East Hampton was a response to the crisis, but it soon proved to be a whole new model. ‘We can bring art to people where they are,’ Schrader said. ‘Major collectors could come in in their bathing suits and flip-flops and look at art and talk about markets and pricing in a way that we wouldn’t really experience at York Avenue.’ And more than that, ‘volume begets volume,’ Schrader continued. ‘September was better than August.’”

Schrader Knows a Lot About Art and Business 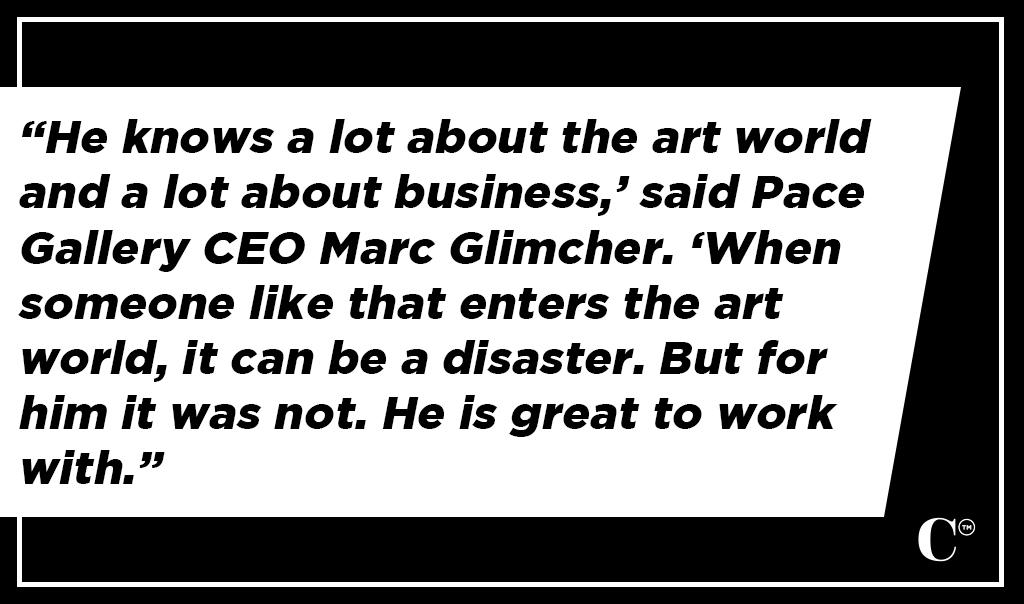 Now with a proven track record of success, Schrader’s unlikely appointment to the position has turned out to be a wonderful decision. While luxury industries across the globe have suffered under the weight of 2020, Schrader has continued to boost Sotheby’s success and promises a rosy future.

ArtNews shares, “‘He knows a lot about the art world and a lot about business,’ said Pace Gallery CEO Marc Glimcher. ‘When someone like that enters the art world, it can be a disaster. But for him it was not. He is great to work with.’”