‘Glass Onion: A Knives Out Mystery’ – Peeling Back This Sharp Whodunit With a Killer Cast

“Glass Onion: A Knives Out Mystery” is a sharp murder mystery that cuts through all layers of ordinary whodunit’s to 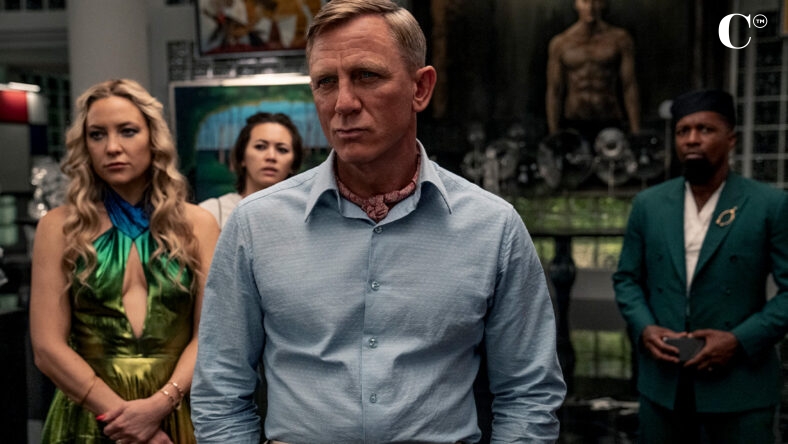 “Glass Onion: A Knives Out Mystery” is a sharp murder mystery that cuts through all layers of ordinary whodunit’s to clearly show that sequels can be as good as, if not better than its predecessor.

Detective Benoit Blanc (Daniel Craig) is back to peel back the layers on a new puzzle involving a fresh set of colorful characters in a posh private estate on a Greek island. The estate belongs to Miles Bron (Edward Norton), a wealthy and somewhat wacky individual who belongs to a closely knit circle of friends from long ago.

The amigos assemble every year for a reunion. This time they gather during the pandemic and are told they will spend the weekend solve the fake murder of their host, Bron. Hey man, rich people need to be entertained just like the rest of us right?

The presence of Detective Blanc is only the first of many mysteries that will need solving over the coming days.  And folks, the mysteries are plentiful and well written.

A Clear Direction for ‘Glass Onion’

Back to navigate the second film in the franchise is its creator Rian Johnson who both wrote and directed this sequel and the original “Knives Out.” Celeb Magazine was with the cast for the film’s Los Angeles premiere (it first premiered at Toronto International Film Festival this fall) and again for interviews the following morning.

“Well, I think just the basic approach to it was sort of starting back with what inspired the first one,which is my love of Agatha Christie and her novels,” said Johnson. “She did something completely different every time, but that still scratched that same basic itch. It hit the same pleasure centers.”

“Glass Onion: A Knives Out Mystery” was shot in Greece during the pandemic. And while that may have added logistical issues for the film’s director and production, it certainly wasn’t felt among the cast.  “I think it was, honestly, the bonding that happened outside of us filming that will always stay so close to my heart,” said Janelle Monáe. “It was like summer camp and you didn’t want your parents to come get you.”

For Madelyn Cline being among Hollywood’s biggest stars, it could have easily been a summer camp from hell. But that was far from the case. She and her castmates bonded in a rare way with the help of Mother Earth. “ I think when we danced under the full moon a little drunk,” she says of the moment she knew she was among friends.

“Was that at my house,” asks Kate Hudson with a laugh.

Spoiler alert: It was not at her house.

But there was a place that the cast and crew could retire to while shooting that was a safe refuge. Johnson had to ensure a safe production while shooting during Covid.  “Rian put spies everywhere to see if we were out, because of COVID,” says Kate Hudson. “He made sure none of us were doing anything outside of our container,” she says.

“And nobody did,” assures Hahn.

Spies is one thing, but it was Norton who spilled the tea on what Johnson did that was truly aces. “He bought us a bar in Belgrad so that we would have somewhere to go,” reports Norton. “That’s right,” says Kate.

Norton may have needed some liquid courage with many of his scenes taking place with Daniel Craig. “ I made a decision in one of the bits where I’m hiding behind Blanc. I said, ‘I think maybe I’m gonna spin around and grab Daniel by the love handles’  you know, like, around the waist,” Norton gestures to the room.

“He does not have love handles,” interjects Monáe.

“He has abs,” Monáe corrects him with a laugh.

Johnson agrees, “Those are abs.”

“And nothing is wrong with love handles,” says Monáe emphatically.

Norton continues, “it’s sorta one of those things, you go, ‘Is this the kinda thing I should ask Daniel Craig if he’s okay with me doing?’ Nah, I’m just gonna do it,” he says.

And he did. As for the risk of doing that, it was worth it.  “His reaction was so great. Daniel’s physical comedy is really, really great.”

The cast has chemistry that oozes from the screen.  Monáe has a plot point that shoves her character to the front and she is magnetic in all of it. Kate Hudson plays Birdie as a loveable, if not disillusioned, person who by Hudson’s own admission probably only listens to every third word of any conversation. Watching her play a character with the political correctness of a toddler is a pleasure through and through. You will have legitimate fun seeing this one.

“Glass Onion: A Knives Out Mystery” is in theaters November 23 for one week only. It will drop on Netflix on December 23.
It is rated PG-13 and runs 2h and 19m.