Happy birthday, Halsey! In honor of the singer turning 26 years old on Tuesday, September 29, we decided to break 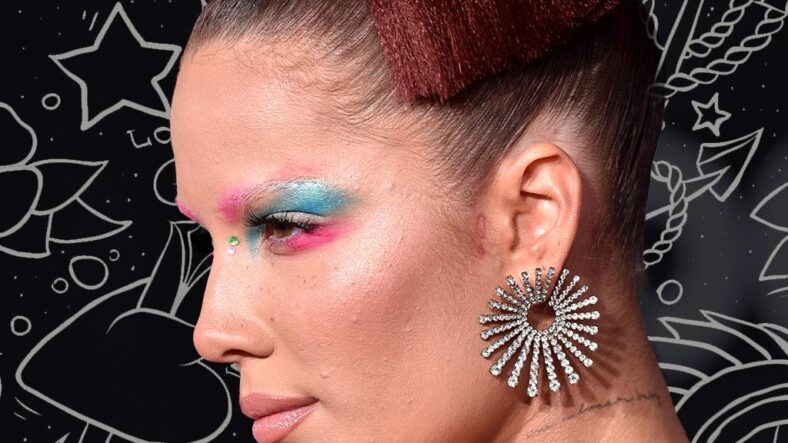 Happy birthday, Halsey! In honor of the singer turning 26 years old on Tuesday, September 29, we decided to break down all of her tattoos for you. It turns out, the “Without Me” songstress has 39 ink designs in total, and they completely cover her entire body, including her arms, hands, legs, feet, back and more! Get this — she even has one on her face!

But what do they all mean, you ask? Are there any emotional stories behind them or are they just silly and fun? We went a head and made you a complete guide to all of them, and boy, are some of them touching!

The star debuted this tattoo in February 2014. Clearly, she’s a huge fan of the singer and songwriter!

‘I’m A Loser Baby’ On Her Neck

Halsey added this ink design to her collection in January 2018. It is lyrics from the 1994 song “Loser” by Beck.

‘Brat’ On Her Arm 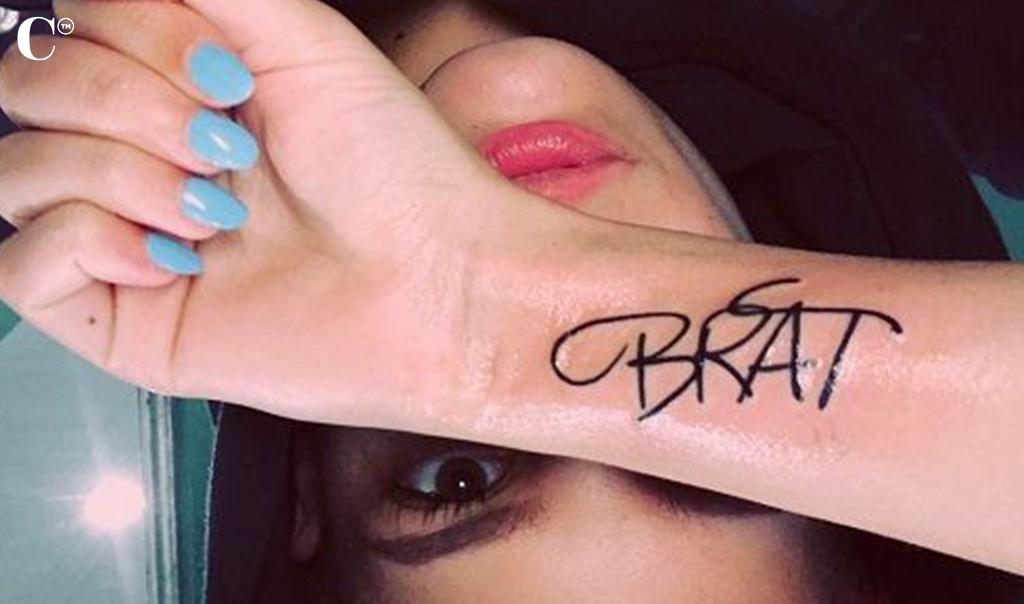 In May 2017, the 26-year-old opened up about this tat, and she explained that her parents used to call her a brat as a kid!

A Knife With A belt On Her Ankle

In September 2014, Halsey got a knife with a belt around it tattooed onto her ankle. She never revealed the meaning behind it, but we hope she does soon!

‘Sins’ And ‘Forgiveness’ On Her Arm

On her right, upper arm, Halsey has a tattoo of the words “Sins” and “Forgiveness,” with her Libra Zodiac sign in between them. “On my Libra scale I’m weighing sins and forgiveness,” she explained on Instagram when she first got the body art in November 2018. And get this — it was designed by rapper Lil Wayne!

Legs And Sneakers On Her Arm 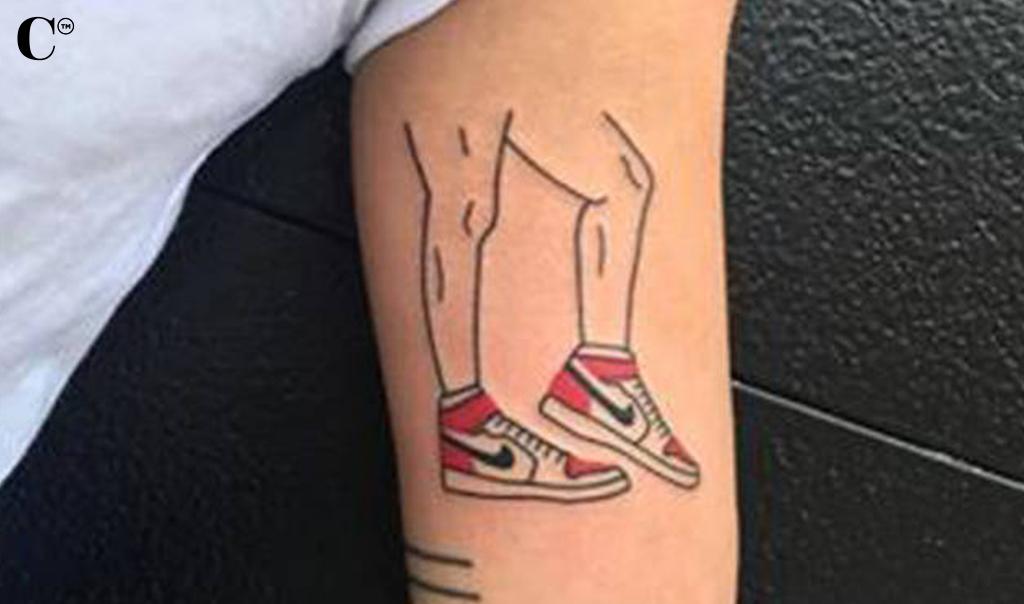 It looks like the pop star loves sneakers! She got a drawing of Nike Air Jordan’s permanently inked onto her arm in August 2018.

Queen Of Diamonds Near Her Ear

If you look closely at Halsey’s cheek (right by her ear), you can see her tiny Queen of Diamonds tattoo. And it turns out, she has no plans to get any more tattoos on her face. While debuting the small ink, she wrote on Instagram, “Headed straight for the castle. @nal.tattoo thanks for my first (and only hopefully) face tattoo.”

Kissing Mouths On Her Thigh

The songstress got this tattoo in August 2014. It shows two faces locked in a big ol’ smooch. She never spoke out about it, but the intricate design was done by tattoo artist Curt Montogomery.

The Four Elements On Her Thigh 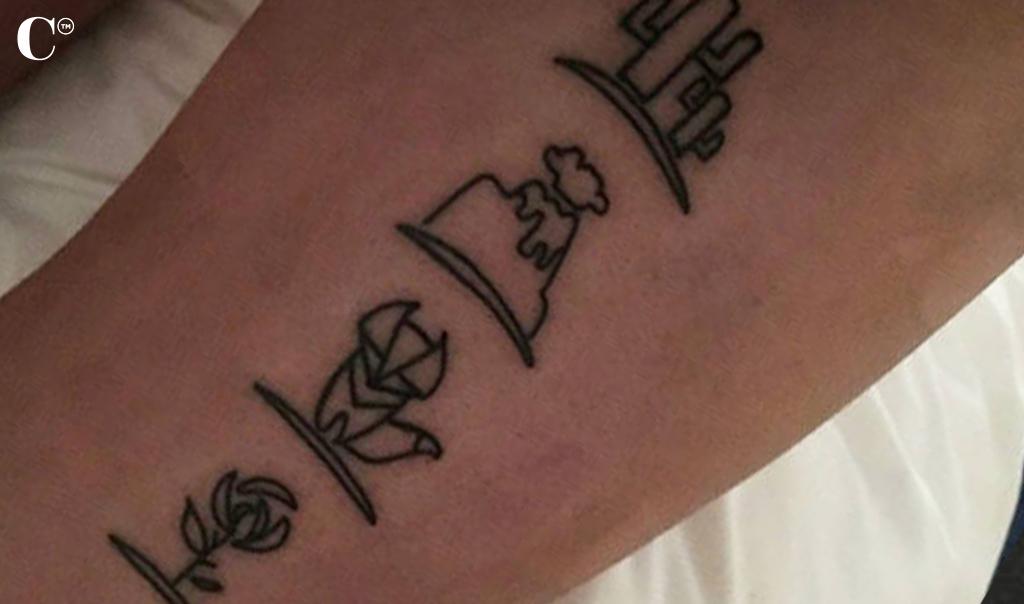 This tattoo was actually inspired by the French book Le Petite Prince by Antoine de Saint-Exupéry — also known as The Little Prince.

“My grandma used to do x’s for my brothers and I, so it’s me and my two brothers,” Halsey explained to  iHeartRadio about the tattoo, which she got in July 2014. “But it kind of turned into a different meaning, because it almost means like a parental advisory.”

A Face With ‘Everything’ On Her Arm

On the singer’s upper arm, she has a face with the word “Everything” under it. It is said to be tribute to Lido, who was the executive producer for her debut album Badlands.

Planet Mars On Her Elbow 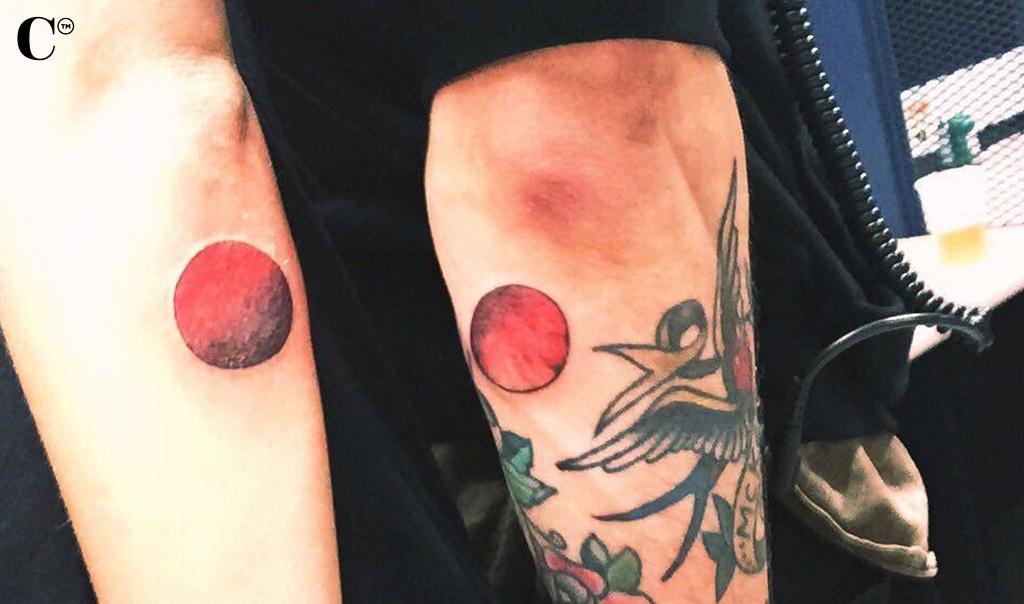 When asked about the meaning behind her Mars tattoo, the musician revealed that she got it matching with one of her friends.

Dice On Her Arm

After making a surprise appearance at LANY’s show in November 2016, she got a matching dice tattoo with frontrunner Paul Klein.

A Horseshoe With A Flower On Her Shoulder

Halsey got a tattoo of an upside-down horseshoe with flowers on her shoulder in September 2014. It is believed to be upside down to represent not needing any luck. Instead, she works hard to get the things she wants.

‘Serendipity’ On Her Rib Cage 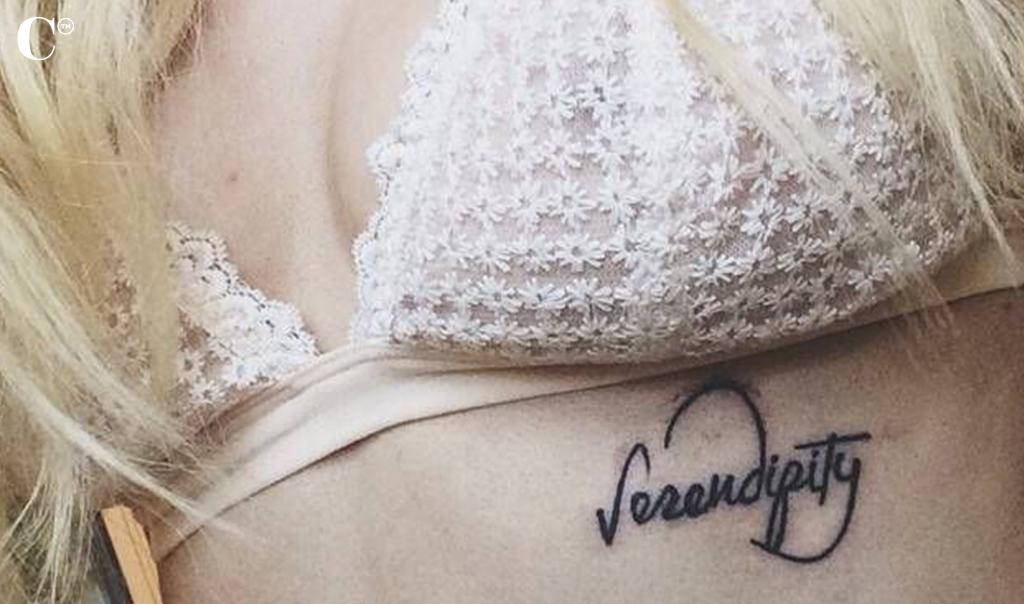 The meaning behind this tattoo is seriously emotional. Located on her rib cage, Halsey’s “Serendipity” ink design is matching with her mom, and is symbolic for their relationship.

‘Star Wars’ Mythosaur On Her Elbow

While debuting this tat in August 2013, the star wrote on Twitter, “I love Star Wars so much that it makes me emotional.”

The Number ’17’ On Her Fingers

Two Roses On Her Shoulder 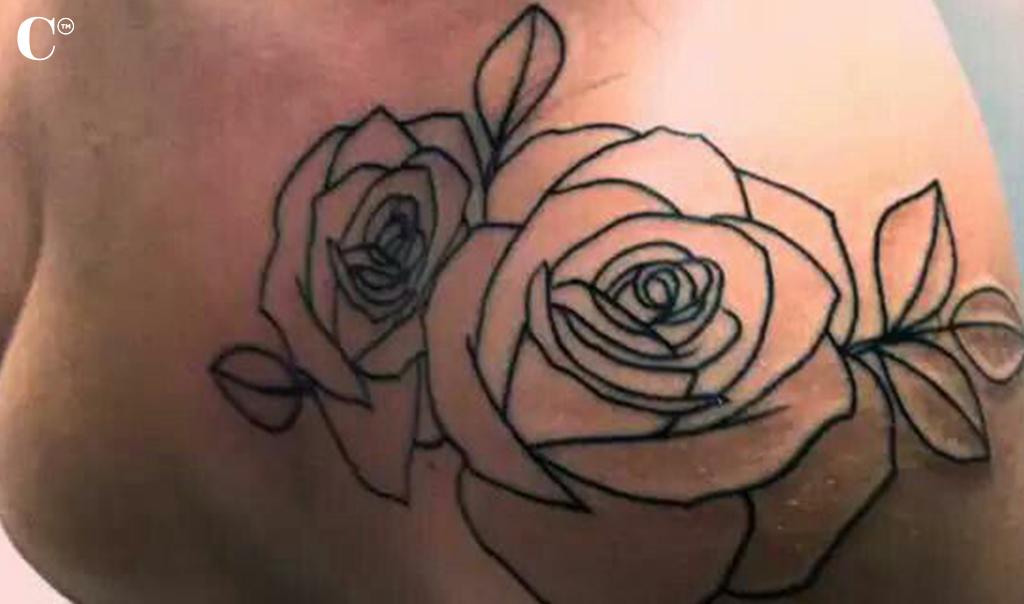 It turns out, the singer got this tattoo when she was in high school at only 17 years old! She’s even referred to it as one of her favorites before, but it’s unclear what the meaning is behind it.

‘Heaven In Hiding’ On Her Arm

Most fans know that “Heaven In Hiding” is the name of one of the songs off of Halsey’s album, Hopeless Fountain Kingdom.

A Match Stick On Her Wrist

Halsey got this tattoo in May 2015. Get this — she chose three fans from Twitter and they all got the ink designs together! How sweet is that?!

A Butterfly On Her Arm 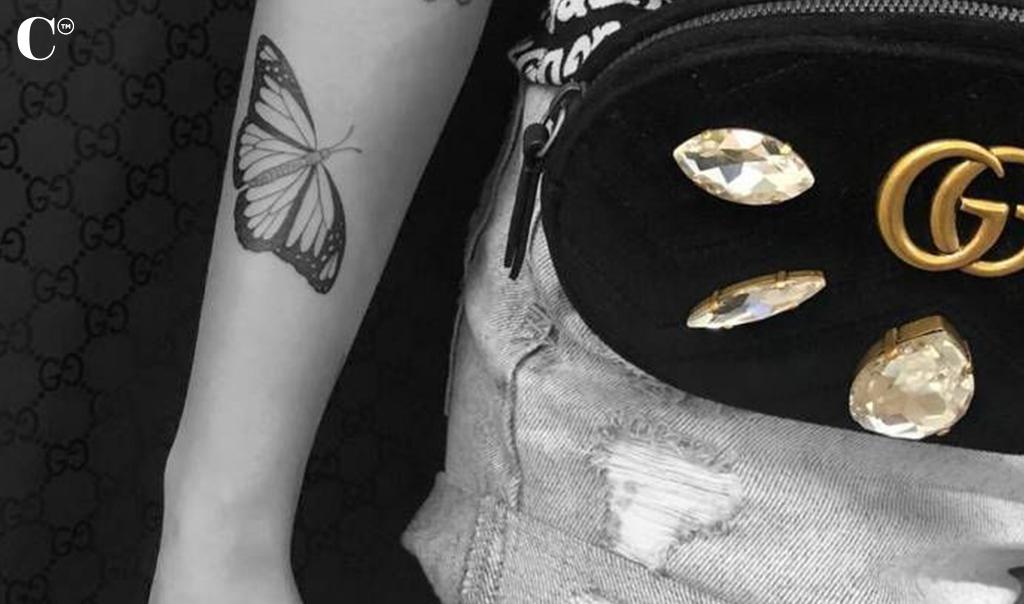 Halsey has not kept it a secret that she’s a huge fan of butterflies, and she even broke her toe once trying to save one!

Barbed Wire Around Her Wrist

The brunette beauty had the words “Crazy Kind” tattooed on her wrist, which is a lyric from her collaboration with G-Eazy. They started dating after working on the song together, but after they broke up, she decided to cover the tattoo with a barbed wire design.

This tat, which she debuted in may 2013, is for her younger brother, Sevian Frangipane! It stands for her birthday — which is May 11.

Jeans With A Playboy Bunny On her Left Arm 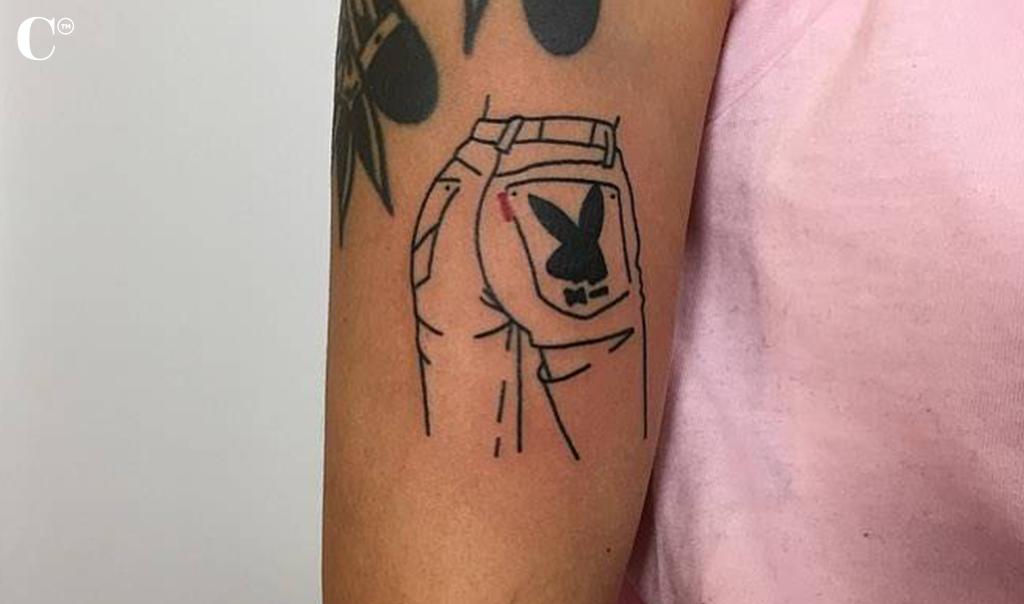 Halsey got this body art after posing for the front cover of Playboy‘s September/October 2017 music issue.

‘Baby’ On Her Waist

Located on her lower abdomen, Halsey’s “Baby” tattoo is so adorable! It’s unclear why she got this one, but we love it.

‘Nightmare’ On Her Back

A few months before Halsey dropped her song “Nightmare,” she got the word inked onto her back!

The Om Symbol On Her Arm 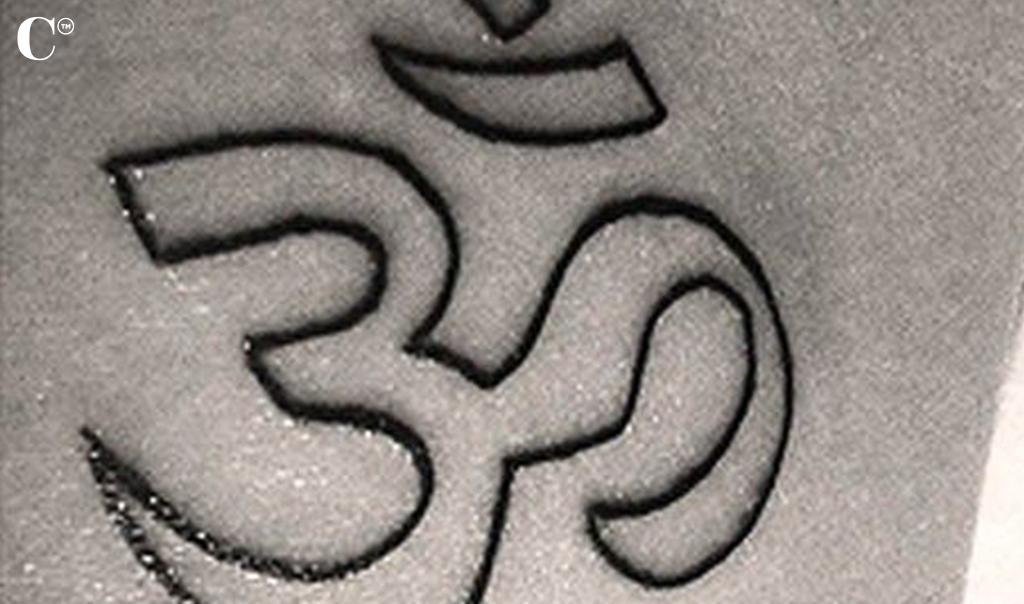 The Om is a sacred, spiritual symbol, which signifies the essence of the ultimate reality and  consciousness.

A Music Score On Her Arm

The singer has a music score tattooed on the back of her arm. But they’re not just any old notes! It turns out, the tattoo is the identifier of her producer Lido and can even be heard in some of Halsey’s songs.

‘Hopeless’ On Her Butt

Halsey got this ink in August 2016, and it’s said to be a tribute to her second album, Hopeless Fountain Kingdom.

An Anchor On Her Foot 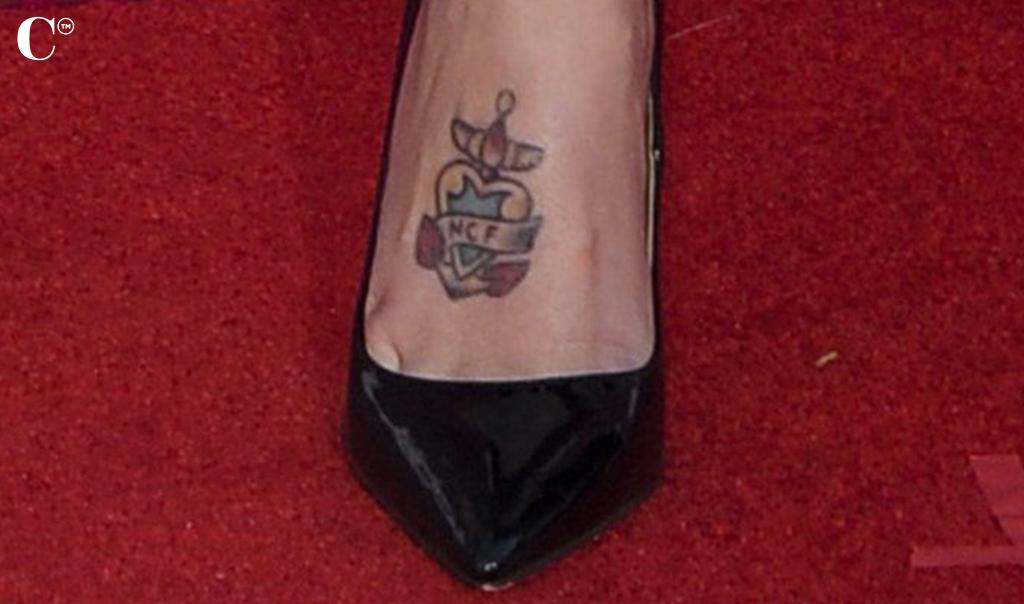 This was Halsey’s first ever tattoo! She got it when she was 16-years-old, and her mom has the same one. It shows an anchor with a banner that has the letter “NCF” on it. The letters stand for her mom’s initials.

A Sword On Her Thigh

She also got this tat at only 16 years old. It is dedicated to a friend of hers who sadly passed away. The ink, which is located on her thigh, shows a dagger with the number “13” on it, which symbolizes January 3 — the day her friend died.

‘These Violent Delights Have Violent Ends’ On Her Arm 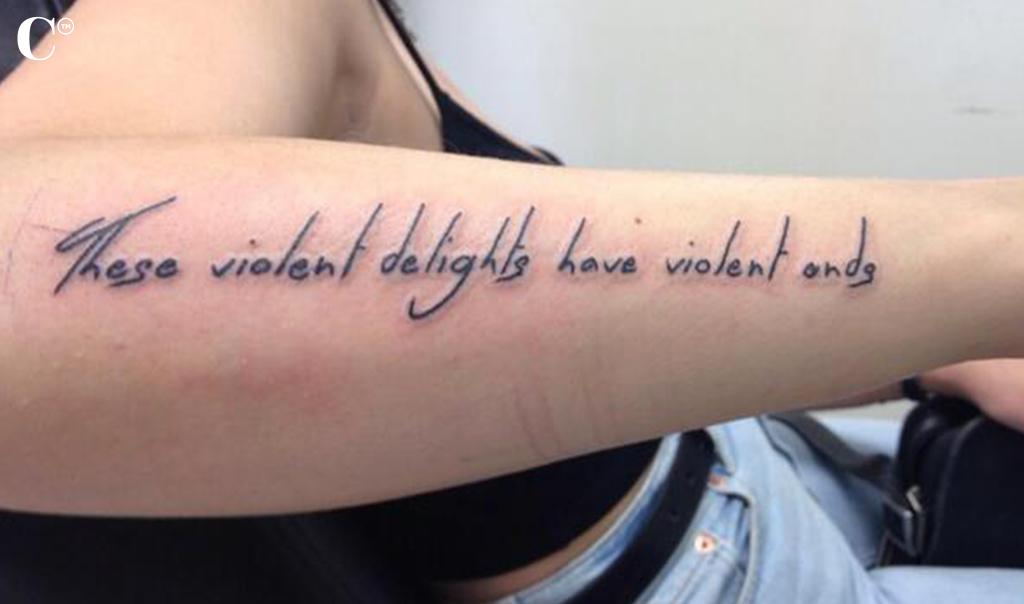 This phrase is from William Shakespear‘s play Romeo and Juliet! She got it in July 2014.

‘Ferox’ On Her Thigh

The Latin word Ferox means courageous, wild and spiritual. Halsey got this tattoo in October 2012, and her friend inked it onto her skin with a sewing needle and India ink. Sounds painful!

Halsey got the numbers “929,” which symbolize her birthday (September 29) tattooed onto her knuckles in August 2019.

‘Poor Thing’ On Her Kneecap 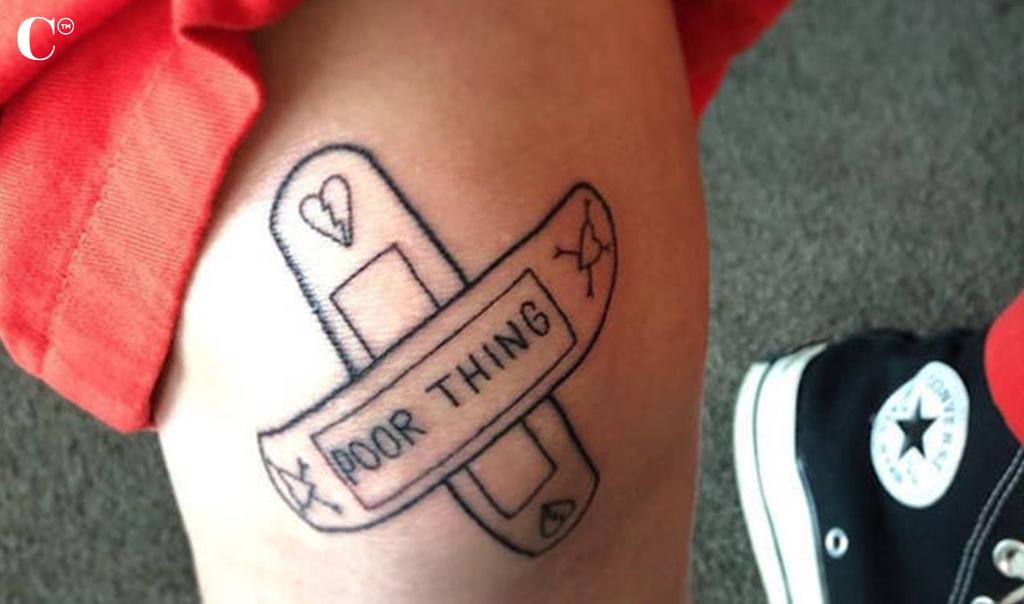 The intricate tattoo (which is located on her kneecap) shows two bandaids with the words “Poor Thing,” written in the middle. She didn’t explain the meaning behind it, but she did reveal via Twitter that it was the most painful one she ever got!

No Face From ‘Spirited Away’ On Her Arm

Her most recent tat is of No Face from Spirited Away! She got it in July 2020, and it’s located on her arm.