Get ready, Harry Potter fans, because we’re about to get the reunion of the century! That’s right, Tom Felton (who 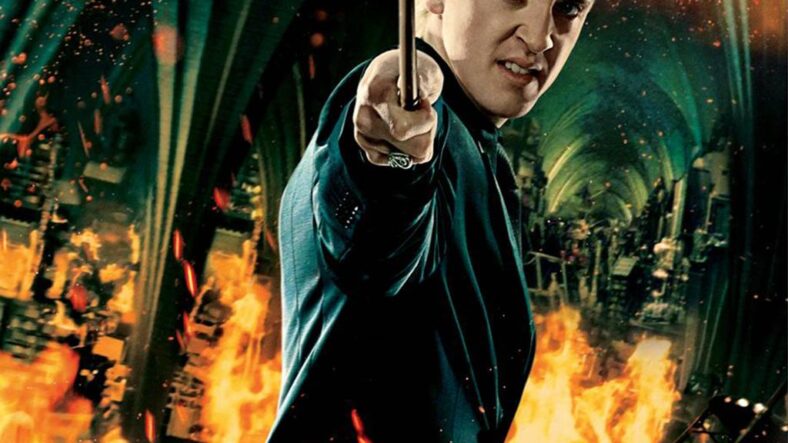 Get ready, Harry Potter fans, because we’re about to get the reunion of the century! That’s right, Tom Felton (who played Draco Malfoy in the magical movies) just revealed that he’s planning on getting the cast back together this November, and we’re seriously so excited.

In honor of the first film’s upcoming 19th anniversary, the actor said he wants himself, Daniel Radcliffe (who starred as Harry Potter), Emma Watson (who portrayed Hermione Granger) and Rupert Grint (he was Ron Weasley in the flicks) to all get on a video call together.

“I saw the Weasley twins the other day. We went out to play some golf. [I’m] always chatting with a lot of the other guys on WhatsApp and staying in touch with them and making sure everything’s alright,” he revealed to Entertainment Tonight. “It’s been nice because it’s the 19th-year anniversary on November 14, so I’m planning some sort of digital celebration … I’m trying to wrangle all the oldies back together again to celebrate the achievement really.”

The star also explained how even now, almost two decades after the franchise started, he still gets recognized for playing the wizard — and he totally gets why fans love his character, despite being a bully.

“He’s great. He has so many layers, he’s misunderstood, he’s also a bit of a git,” he said of Draco. “He needs a hug really. I think maybe people feel sorry for him, he needs a bit of affection. Either way, I’m highly flattered and intend to do my best to satisfy that desire.”

Has The Cast Hung Out Before This?

It turns out, this isn’t the first time the cast has gotten together over the years. Yep, they’re actually still pretty close and have all hung out a lot! Back in July, Felton had a video chat with the stars who played his parents in the movies — Jason Isaacs and Helen McCrory — and it was everything. Plus Bonnie Wright (who played Ginny Weasley) and Oliver and James Phelps (who starred as Fred and George Weasley) had a virtual reunion in May 2020. Oh, and did we mention that a bunch of the cast members got together for Christmas last year? Yep, Evanna Lynch (also known as Luna Lovegood), Wright, Felton, Watson and Matthew Lewis (who played Neville Longbottom) had dinner, and they even shared some pics from their get together.

In June 2020, Radcliffe also said he was “absolutely” still in touch with his former costars, when asked where their relationship stands now.

Did Tom Felton And Emma Watson Ever Date?

But the two stars from the series who have continued to hangout the most are Felton and Watson, and many fans are convinced that they secretly dated for a while. And get this — they even jetted off to Africa together in August 2019.

And a few months later, the actor could not stop gushing over the brunette beauty in an interview with Daily Mail.

To add fuel to the fire, when asked if he could see them dating, Grint told Entertainment Tonight, “Yeah I could. There was always something. There was a little bit of a spark.” OMG.

Will The ‘Harry Potter’ Cast Ever Reprise Their Roles For A Reboot? 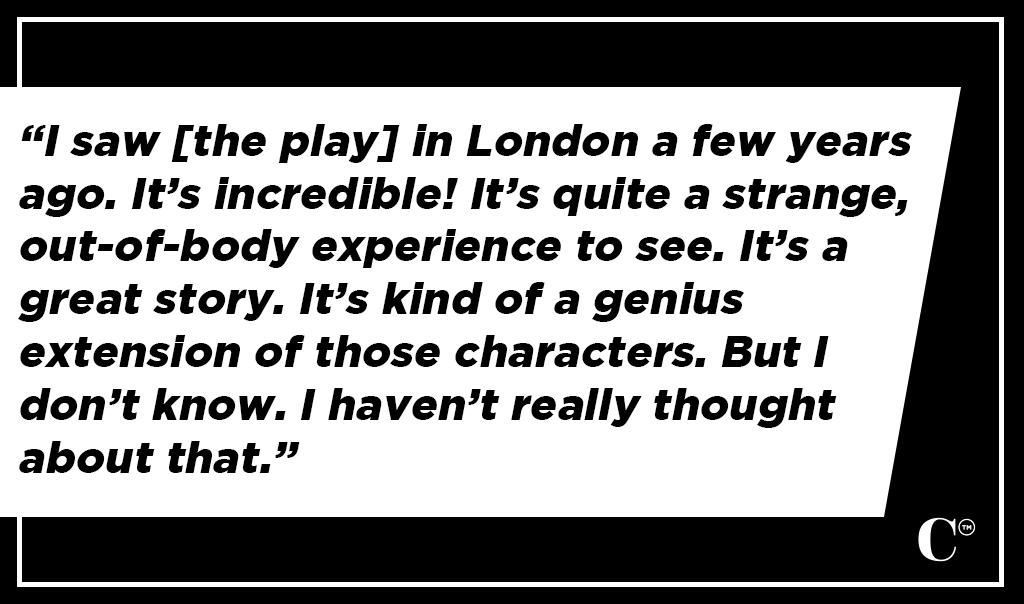 Since the eight-part movie series was such a big part of a lot of our childhoods, it’s only natural for fans to wonder if the stars will ever return and reprise their roles for a reboot. Especially since the author who wrote the books that the films were based off — J.K. Rowling — wrote a new part of the story called Harry Potter and the Cursed Child. It takes place years later — when Harry, Ron and Hermione are adults — and it follows their kids as they set out on their own adventures! It’s now become a play on the West End in London and on Broadway in New York City — but will they ever turn it into a movie? Well, Grint previously said that he would definitely be down to star in another flick.

“Never say never!” the 31-year-old told Entertainment Tonight. “I saw [the play] in London a few years ago. It’s incredible! It’s quite a strange, out-of-body experience to see. It’s a great story. It’s kind of a genius extension of those characters. But I don’t know. I haven’t really thought about that.”

As for Radcliffe, he isn’t ready just yet, but he isn’t ruling it out for the future.

“You never want to close a door on anything, especially something that’s been so good to me,” he explained. “But I do think, at the moment, I’m definitely not at a stage where I would feel comfortable going back to it. Who knows if in 10, 20 years I would feel differently about that, and I think I’ve got a little while before I’m sort of age-appropriate for this Harry.”

What Have The ‘Harry Potter’ Stars Been Up To Over The Years? 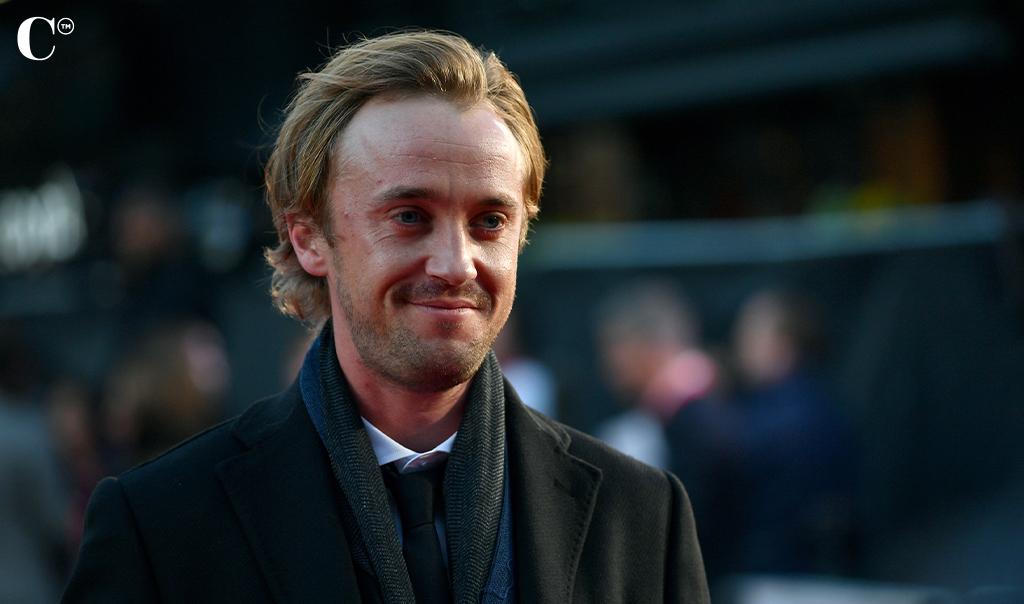 After the Harry Potter series ended, Felton continued to act. He went on to star in Rise of the Planet of the Apes, The Apparition, From the Rough, In Secret, Belle, Murder in the First, Against the Sun, Risen, Message from the King, A United Kingdom, Stratton, The Flash, Megan Leavey, Feed, Ophelia, Origin, Braking for Whales and more. He’s also got three new movies in the works, so yeah, the list seriously goes on and on! That’s not all. The actor also stepped into the music industry, and released four EPs over the years. As for his love life, he dated Jade Olivia Gordon (who portrayed Draco Malfoy’s wife in the HP movies) from 2008 to 2016. Now, it looks like he’s single.

What about Radcliffe, you ask? Well, Harry Potter was just the beginning for him! Afterwards, he starred in The Woman in Black, Kill Your Darlings, Horns, What If, A Young Doctor’s Notebook & Other Stories, Trainwreck, The Gamechangers, Victor Frankenstein, Swiss Army Man, Now You See Me 2, Imperium, Lost in London, Jungle, Beast of Burden, Guns Akimbo, Escape from Pretoria, Miracle Workers and others. He also headed to Broadway, and starred in the plays How to Succeed in Business Without Really Trying, Equus and The Lifespan of a Fact. So impressive! He’s been dating actress Erin Darke for eight years.

As for Grint, prepare to have your minds blown because the star is now a father! Yep, he and his girlfriend, Georgia Groome, welcomed a baby girl together in May 2020. As for his career, he has acted in Servant, The ABC Murders, Snatch, Sick Note, Moonwalkers, Instruments of Darkness, Postman Pat: The Movie, CBGB, Underdogs, Charlie Countryman, Into the White and more. In 2014, Grint made his Broadway debut as Frank Finger in the play It’s Only a Play. Plus, he starred in the music video for Ed Sheeran‘s song “Lego House.”

Watson did not slow down after the Harry Potter series came to an end. She accomplished a lot, starring in titles like My Week with Marilyn, The Perks of Being a Wallflower, The Bling Ring, This Is the End, Noah, Colonia, Regression, Beauty and the Beast, The Circle, Little Women and more. She also took some time out of the spotlight to focus on her education, and she graduated from Brown University in 2014. Plus, the actress has dabbled in modeling, and has devoted a lot of her time to speaking out about feminism.

Tags: HARRY POTTER WHERE ARE THEY NOW