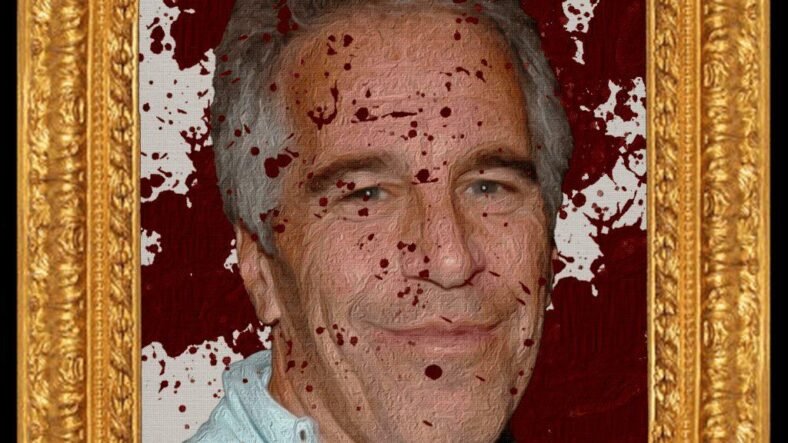 It’s fair to say Jeffrey Epstein’s art tastes ran to the creepy, weird, and oftentimes downright inappropriate. The now-dead convicted pedophile had a slew of bizarre paintings, including kids and nudes, chilling sculptures, and assorted off-kilter artworks scattered all over his many mansions around the world—in addition to his private Islands.

Yet it seems so many of Epstein’s friends and business associates, who were frequent visitors and regularly flew with him and bestie “Madam” Ghislaine Maxwell—along with a slew of very young beautiful girls, oftentimes underage—on the “Lolita Express” private jet owned by Jeffrey Epstein, didn’t blink an eye.

The artist, Edgar Degas said, “Art is not what you see, but what you make others see” and it’s pretty clear at this point that Epstein was capable of presenting as a very different person to many people, so that kind of fits with his personality skill set. 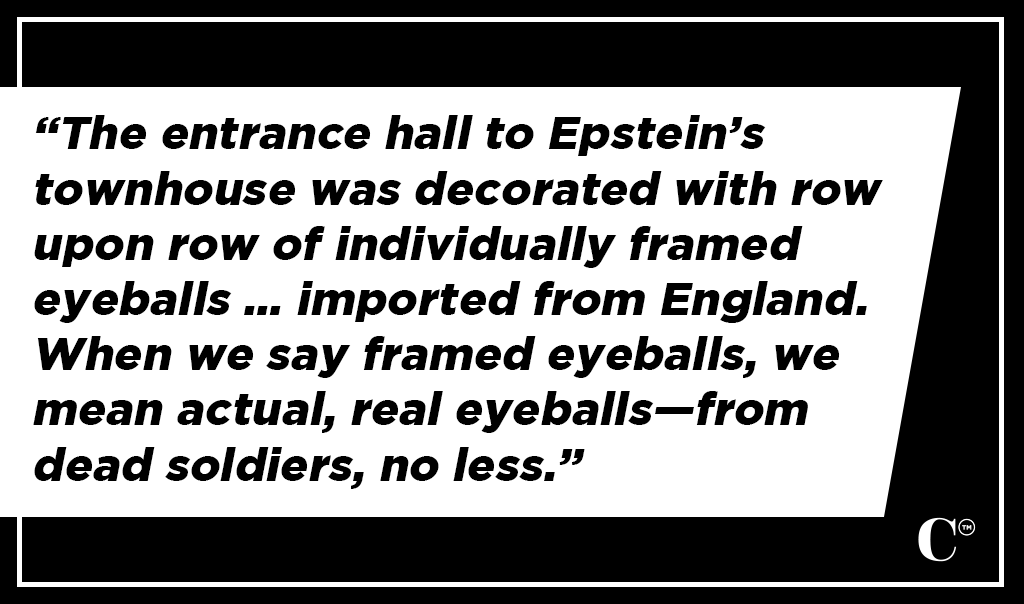 However, in contrast, Jarwaharlal Nehru once said, “The art of people is a true mirror to their minds,” and I side with the famed activist and former Indian Prime Minister on this subject—because it seems inconceivable for people not to have been at the very least a “tad disturbed” by Epstein’s art collection.

Well, in fairness though, art is subjective, so how about y’all make up your own minds? Read on for details about Jeffrey Epstein’s art collection, and at the end of the post, you can watch the video taken during a police search of the pedophile’s Palm Beach mansion.

Epstein was known to boast about the size of his $77 million Manhattan mansion, which is believed to be one of the largest private homes in the entire city, and located in the tony Upper East Side (on 71st, between Madison and Fifth), allowing for stunning views of Central Park.

But, Central Park appears to be the last thing you’d notice in Epstein’s house, as there was just so much creepy weirdness all around, everywhere, to catch your eye—literally, from the second you walked through the front door.

Keeping a creepy eye on you

According to a 2003 Vanity Fair article, titled “The Talented Mr. Epstein” (ouch, that didn’t age well), the entrance hall to Epstein’s townhouse was “decorated with row upon row of individually framed eyeballs … imported from England”.

When we say framed eyeballs, we mean actual, real eyeballs—from dead soldiers, no less. Yeah, that’s not creepy, bizarre, or weird, at all. And it just gets creepier and more bizarre from then on in.

One regular visitor to the home told the Times newspaper there was a giant chessboard at the bottom of the staircase, which consisted of “customized figurines modeled after his staffers dressed suggestively”.

The house is comprised of five bathrooms and innumerable bedrooms, within the 40 rooms that are spread across a whopping seven floors in total, and all of them contained creepy, weird shit—including a locked safe packed full of pornographic images of kids.

The weird gets even weirder…and even more creepy

The living room of the Manhattan Epstein mansion had a life-size female sex doll hanging from a chandelier.

On the second floor there was a mural of “a photorealistic prison scene that included barbed wire, corrections officers and a guard station, with Mr. Epstein portrayed in the middle” mounted on the wall.

“Jeffrey said, ‘That’s me, and I had this painted because there is always the possibility that could be me again,’” R. Couri Hay, a P.R. specialist, told the Times, explaining he was invited to Epstein’s home following the millionaire’s first arrest back in 2008, expressly to view the mural.

Jennifer Araoz, who claims Epstein raped her when she was 15-years old, said that the disgraced financier’s infamous “massage room” was adorned with photos of naked women and kids. Then there’s one of the bathrooms.

“He had a bathtub that was kind of like opened, and there were prosthetic breasts that he could play with while he was taking a bath,” Araoz told NBC News in an interview, remarking that she found it “odd”.

In the study there was a $5.9 million painting of a nude woman holding one of her bare breasts, a chilling self-portrait of Epstein, a decidedly weird oil painting of Bill Clinton wearing Monica Lewinsky’s infamous blue dress, and more than your average share of dead animals scattered around.

The Vanity Fair article notes there was a dead, stuffed black poodle that was placed on top of the grand piano in the study, which Epstein reportedly liked the point out to visitors, telling them, “No decorator would ever tell you to do that … But I want people to think what it means to stuff a dog”.

Oh, that’s deep, Jeffrey……real deep. Side note: just because you can, doesn’t mean you should.

Epstein didn’t just favor dead dogs though, he also loved himself a giant dead tiger too, this time in his home office.

A hedge fund trader who visited the house of horrors, told the New York Post that he’d taken photos of the large taxidermied tiger, which was perched on top of a giant desk.

“I don’t think the pictures really give proper dimensions,” he said. “The desk had to be one of the biggest desks I’ve ever seen, and that tiger just dwarfed it.”

He also took a photo of the dead poodle, which, he said, “looked like it needed to be dusted”.

In the mansion’s marble foyer, there was an absolutely humongous sculpture of a naked African warrior—twice-life-sized, and in Epstein’s “leather-room” where he liked to serve guests tea—or rather, his manservants clad in white gloves served guests tea—there was a huge Oriental fantasy painting of a woman holding an opium pipe and caressing a snarling lion skin.

Drink your tea up now! Nothing strange going on here!

Let’s move the creepy Jeffrey Epstein’s art tour to Palm Beach, Florida where things were every bit as weird, and even more butt-naked nude.

The police search video shows the property was littered with illicit photos and images of girls and young women, in addition to a topless photo of Ghislaine Maxwell (shudder).

There are shady paintings, sculptures, photos, sketches and posters everywhere, including a whole wall covered in nude photos of women and men, a painting of a nude woman lying on her back, and a photo of a very young woman, naked and lying on a beach. 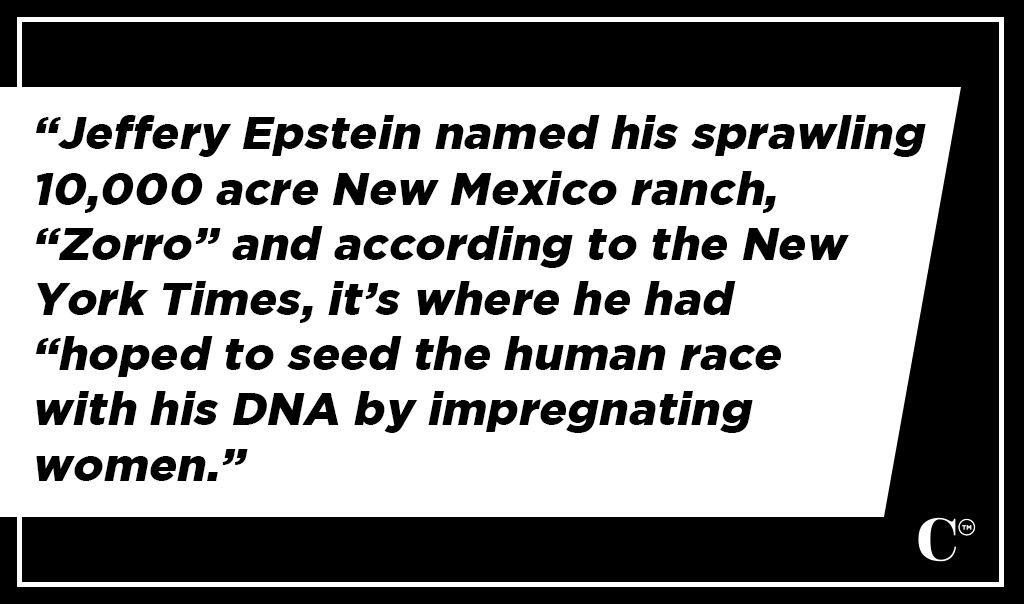 In the master bedroom there’s a large sketch of Maxwell, a painting of a nude woman, and a sketch of another woman’s bare ass—in fact, all throughout the Palm Beach pad there’s a multitude of photos, sculptures and paintings of women’s and girls’ bare butts, oh and some weird and creepy sculpture of a blind-folded person too.

Creepiest of all though, is what appears to be a dentist’s chair and metal medical cart that’s stacked with drills and other tools.

Jeffery Epstein named his sprawling 10,000 acre New Mexico ranch, “Zorro” and according to the New York Times, it’s where he had “hoped to seed the human race with his DNA by impregnating women.”

The residence, which is located in the Santa Fe community of Stanley, featured numerous swimming pools, log cabins, guest homes, a firehouse, its own airport hangar and runway, and a multi-story garage packed full of high-end sports cars.

However, according to a former-employee, who noted that security at the property was “extremely tight”, Zorro’s most outstanding feature was an absolutely gigantic and garish oil painting of a little girl, wearing a wedding ring, clinging onto a dead lioness’ corpse, which was hung at the bottom of the staircase for all newly arriving guests to admire. 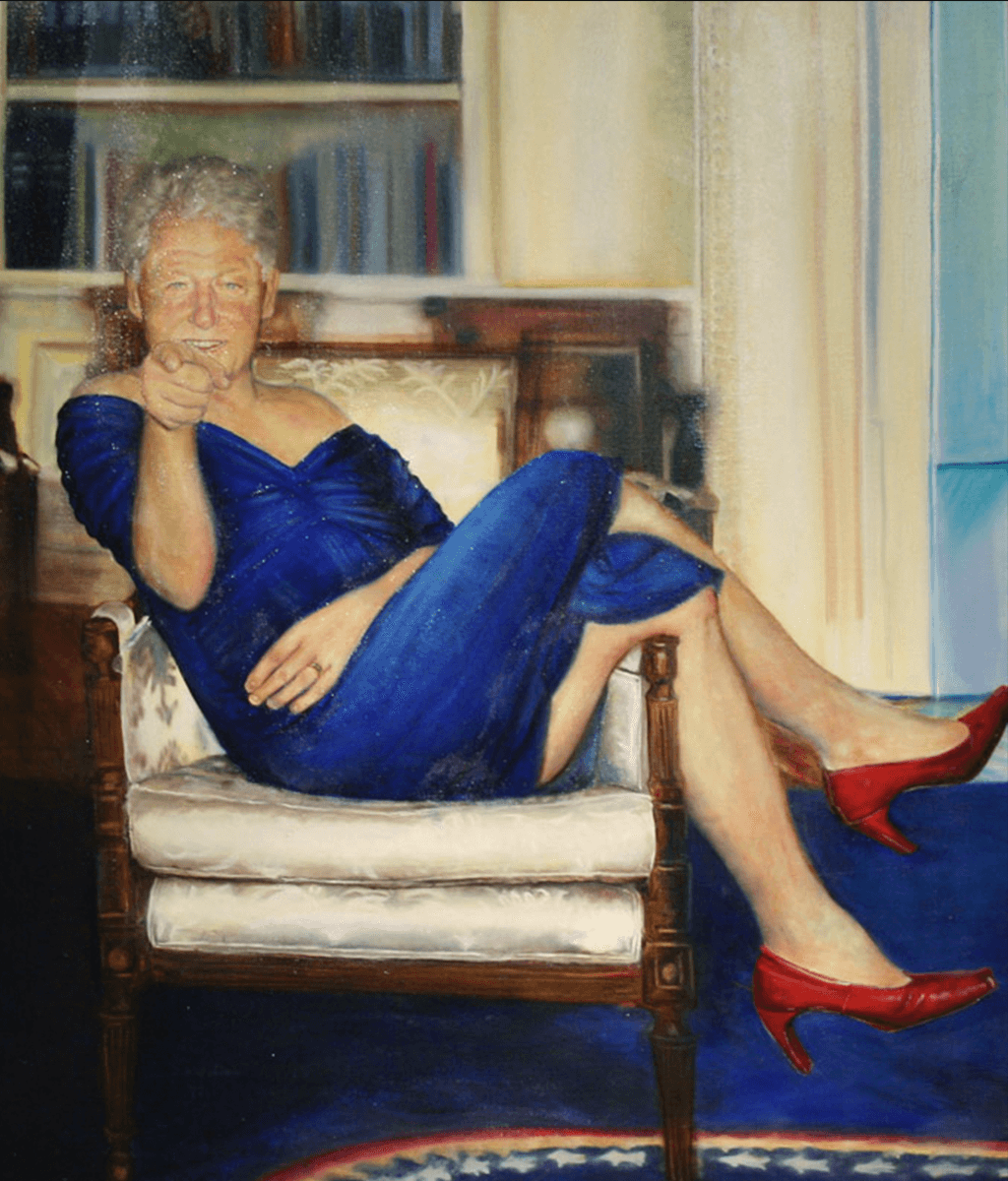 “We would talk about how creepy it was, this strange painting with nothing else around it. From the minute you got there, you felt the uneasy vibe,” the ex-worker told Fox News.

How large was the painting? Well, try 6 foot by 6 foot large. Quite the talking piece.

Plus, taking into account their father’s very close friendship with Epstein it would make for a beautiful Trump family heirloom.

How about the giant Bill Clinton painting? Well, given the fact that the Bill and Hillary were so tight with Maxwell that she even attended Chelsea Clinton’s wedding back in 2010, they’ve got to be a shoo-in for first dabs on that gem.

As for the rest? Well, the jury’s out there. At the date of posting, Jeffrey Epstein’s art collection has yet to be valued. And when it is finally valued, it could take years to even attempt to monetize it, given the fact that the dead sex offender signed a new will, just prior to his supposed suicide, transferring his entire estate into an off-shore trust fund.

Then there’s the issue that a lot of Epstein’s supposedly pricey art pieces were actually fake, according to an incredibly bizarre interview between Mother Jones and Epstein’s buddy, Stuart Pivar:

“Jeffrey was amused to have in his house fake art which looked like real art. Because of the fact that he was putting one over, so to speak. He thought that he was—how do you describe that?

“When you walked into this house, for example, there was a Max Weber or something like that, and it was a fake. And it amused him that people didn’t realize that.

“He was able to furnish his house with the fake paintings. Jeffrey had a collection of underage Rodins, for example, because what difference does it make if it’s real or not real? And if the real one costs nothing and the expensive one—it doesn’t make a difference.

“He was amused to put one over on the world by having fake art. He thought that he was seeing through the fallacy.”

Which brings us back to Degas’ quote once again, “Art is not what you see, but what you make others see”.