Jerry Falwell Jr., a prominent evangelical figure has posted and then very hurriedly deleted a shocking photo. Falwell, an outspoken 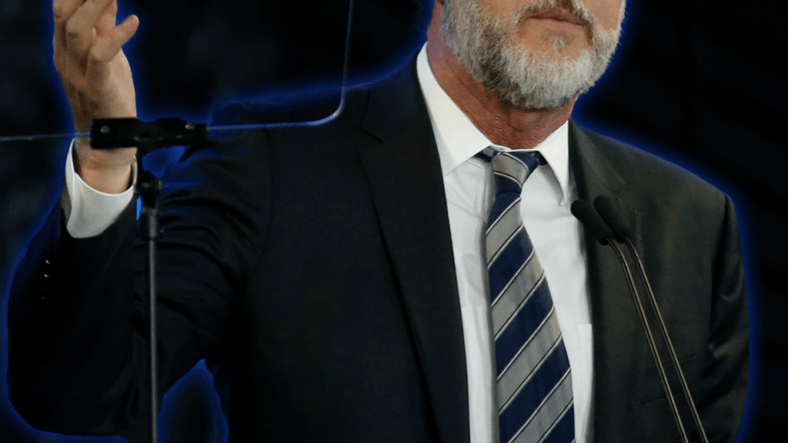 Falwell, an outspoken supporter of President Donald J. Trump, is no stranger to photo scandals and shocking revelations. His evangelical platform rests on a strict Christian doctrine, and he has very public opinions on the behaviors and beliefs of others. However, the president of the controversial conservative Liberty University has frequently been under fire for behavior that most Christians would consider unacceptable.

This apparent public hypocrisy has not stopped him from continuing his public-eye brand of evangelism, and the public is often left to wonder, “what IS he thinking?”

Falwell, son of famed tv evangelist and political activist James Lamon Falwell Sr., has always used his position of power to speak on his beliefs and his opinion of the state of America.

A well-known critic of former President Barack H. Obama, Falwell has spent years fighting what he considers the liberal scourge in America and the anti-Christian creep of laws designed to weaken the rights of faithful Christians in America. Vocal in his anti-gay sentiments among other opinions, the outspoken evangelical often targets politicians he feels are contributing to the decline of the American Christian. 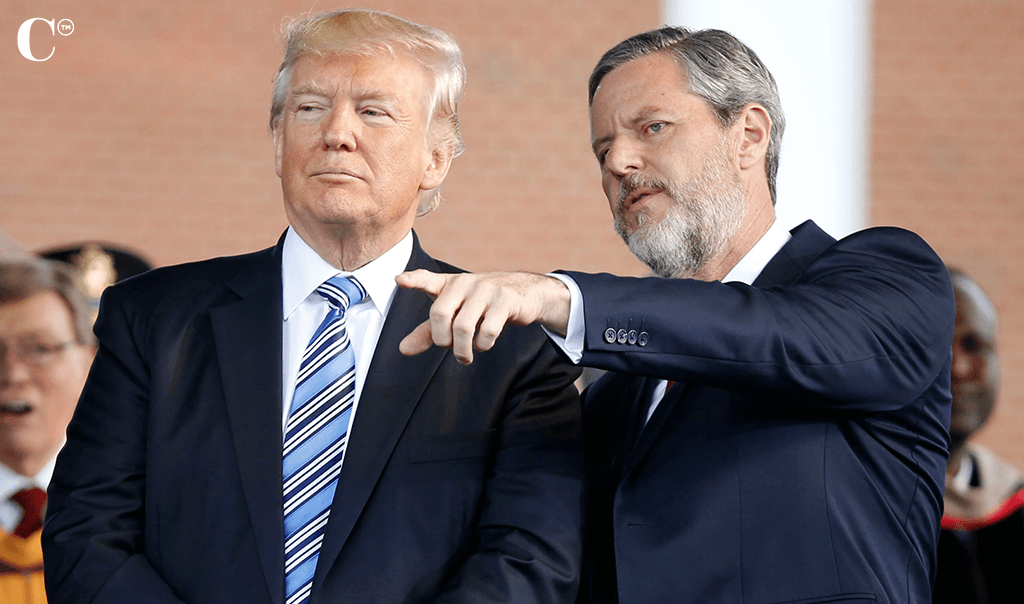 During a CPAC address in 2019, Falwell took verbal shots at United States Representative from New York, Alexandria Ocasio-Cortez, an outspoken supporter of democratic socialist ideals, something Falwell considers dangerous to the future of American society.

Bishop Talbert Swan, the president of the NAACP and a well-known author, summed up Falwell’s bizarre and inflammatory comments in a tweet, saying, “@JerryFalwellJr threatened to shoot @AOC if she tried to ‘take his cows’ during #CPAC. Here he threatens to kill Muslims: ‘…if more good people had concealed carry permits, we could end those Muslims…’”

Ocasio-Cortez slammed Falwell’s CPAC comments in a follow-up tweet, accusing him of Islamophobia. His support of President Trump has earned him several such verbal spars with political figures over the years, and his outspoken personality has drawn criticism and critique.

Some of this criticism is aimed at what many consider to be very odd behavior for a Christian leader.

According to a Reuters report, “Around 2011, Falwell, president of Liberty University in Virginia, and his wife, Rebecca [publicly known as Becki Tilley], began personal fitness training sessions with Benjamin Crosswhite, then a 23-year-old recent Liberty graduate…In 2016, Falwell signed a real estate deal transferring the sports facility, complete with tennis courts and a fitness center owned by Liberty, to Crosswhite. Under the terms, Crosswhite wasn’t required to put any of his own money down toward the purchase price, a confidential sales contract obtained by Reuters shows.” This transfer of University assets to a personal entity raises eyebrows and many questions about Falwell’s motives. In the same Reuters report, a response from Liberty University claims, “Falwell was just trying to be, ‘a business mentor.’”

But What About The, “Pool Boy?” 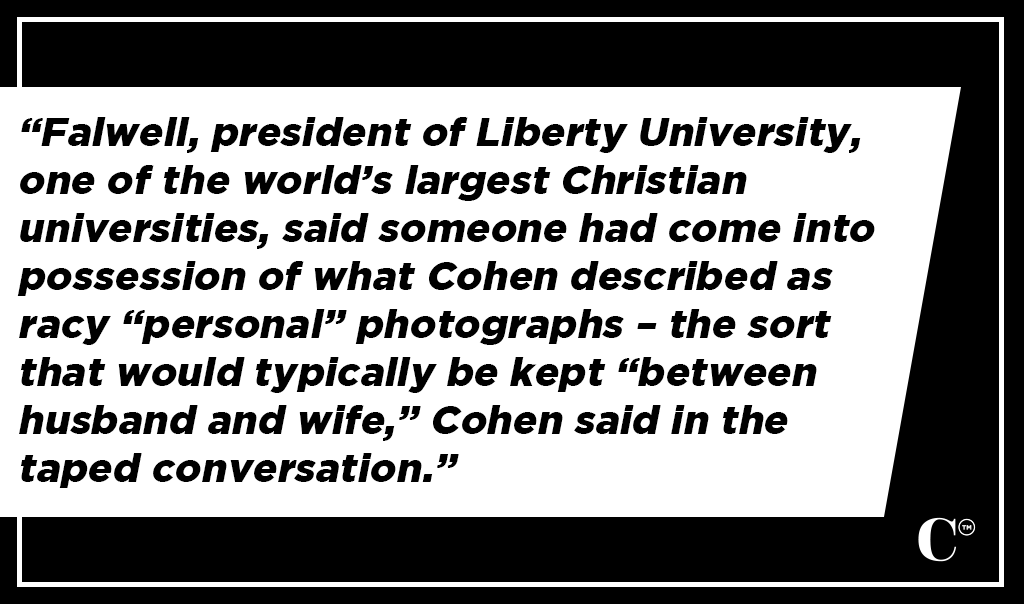 Granda denies any knowledge of racy photos, and, through his attorney, expressed his desire to be left alone. But where did these rumors come from? Why, again, is Falwell being involved in inappropriate exchanges with young men?

The Most Shocking Claim

These two incidents are not alone. What is, perhaps, one of the most shocking claims dates back to 2016 and the months leading up to the Republican primary for president.

Most evangelical leaders had galvanized between candidate Ted Cruz, a Tea Party Republican and outspoken Christian politician. So, it was alarming to them when one of their own, Falwell, turned on a dime at seemingly the last minute and endorsed then-candidate and outsider, Donald J. Trump.

Trump’s behavior over the years has been decidedly unchristian, and Falwell’s endorsement was a move that left fellow donors and supporters reeling.

Again, Falwell and alleged, “racy photos,” may be the center of this story.

Reuters reports that Michael Cohen, a well-known political fixer and infamous attorney for Trump, was called in to, “handle,” a situation involving Falwell. According to a tape of Cohen discussing the incident reported on by Reuters, “Months before evangelical leader Jerry Falwell Jr.’s game-changing presidential endorsement of Donald Trump in 2016, Falwell asked Trump fixer Michael Cohen for a personal favor, Cohen said in a recorded conversation reviewed by Reuters.

Falwell, president of Liberty University, one of the world’s largest Christian universities, said someone had come into possession of what Cohen described as racy “personal” photographs – the sort that would typically be kept “between husband and wife,” Cohen said in the taped conversation.” Cohen threatened to fly to Florida to handle the unnamed blackmailer himself, and the evidence was apparently destroyed. Cohen did claim, in the tape, to have kept one of the photos, and described the content as, “terrible.” The Falwells declined to comment on the story.

This latest curious scandal, however, involves a photo far more concrete than, “alleged,” but perhaps just as perplexing.

In the photo that Falwell posted on his own Instagram account, a woman with a retro hairstyle, who is definitely not the wife of the Christian leader, poses next to the tv evangelical.

Bizarrely, both the unnamed woman and Falwell have their pants unbuttoned and fully unzipped, and in Falwell’s hand is a dark looking drink which he referred to in the photo caption as, “just black water in my glass. It’s only a prop.”

Immediately after posting it, Falwell hurriedly deleted it without an explanation.

It leaves people to wonder who the woman was, and what the story is behind the suggestive and provocative photo. The 58-year-old evangelical seems to struggle with scandals and photographs. Hopefully someone close to the university president will tell Falwell to put the camera down for a little while.