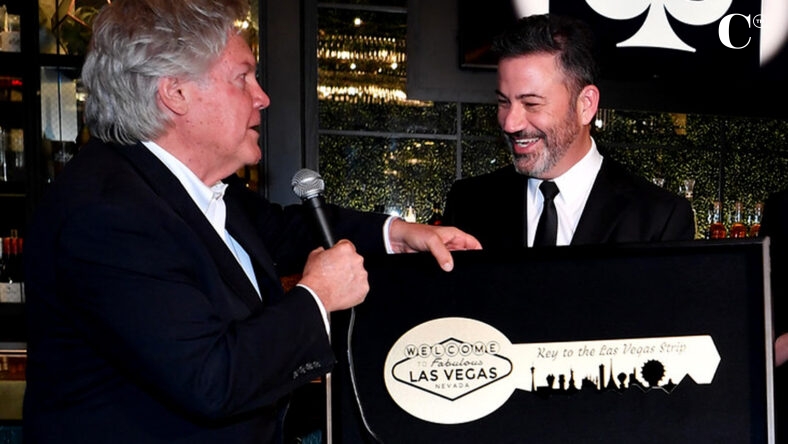 The late night television host of “Jimmy Kimmel Live” received the Key to the Las Vegas Strip earlier this month. Kimmel, a Las Vegas native, was joined by his wife Molly McNearney, Vegas political leaders and fellow comedians at his comedy club at the Linq Promenade for the accolade.

Also on the agenda for the weekend for Kimmel were a few other big celebrations. First, the comedian turned 55 in his hometown and also marked the reopening of Jimmy Kimmel’s Comedy Club.  “Thanks to everybody for coming out. We are very excited to be open again,” Kimmel told the crowd moments after getting the key.  “I hope it [the key] works. I am going to be testing it on your homes,” the comedian joked to fans. “As a kid who grew up here in Las Vegas it’s a great honor to have this club and to get this key.”

Kimmel’s Comedy Club first opened in the summer of 2019. The club was designed by the comedian himself and resembles his own living room according to Kimmel. The club sees both established and the best up and comers in comedy. Lunelle is a frequent performer. She has been joined by names like Tom Arnold, Chris Distefano and Paul Rodriguez. In fact, Jimmy Kimmel’s Comedy Club has been voted Best Comedy Club by the Best of Las Vegas awards.

Jimmy Kimmel Donates To Cause

An important cause in Vegas that got some attention from the Emmy winner was one that is close to Kimmel’s heart. The Nevada Chapter of the ALS Association got a big birthday boost from Kimmel. The Vegas native offered his support to longtime family friend Joey Porrello. Porrello, who was diagnosed at 28 with ALS in May is Kimmel’s godson. Kimmel both participated in the Walk to Defeat ALS in Las Vegas and helped with fundraising. The TV host matched $55,000 in donations in honor of Porrello and the comedian’s 55th birthday.

“Today we are walking in Las Vegas in support of my friend Joey to fight ALS! I will be matching $55k in donations. Link in bio. @JoeyDoesALS @ALS @ALSA_Nevada,” Kimmel posted on his social media.

In the coming year Kimmel will once again be hosting the Oscars, the comedian’s third time hosting. Kimmel previously helmed the Academy Awards in 2017 and 2018. It was the 2018 Oscars that made headlines for incorrectly awarading “La La Land” the best picture initially. It would soon be discovered that “Moonlight” was the correct winner.

But, that is small potatoes compared to what occurred last year during the live airing of the 94th Annual Academy Awards in which Will Smith slapped comedian Chris Rock on stage with an audience of millions watching.

As for how Kimmel will approach it this year, well that remains to be seen exactly. “It’s got to come up in some way. You know, I don’t want to really make light of it necessarily, because it wasn’t to comedians. You know, comedians are mad about it. It’s like, it’s one of those things that for a group of people that find everything funny, it’s not funny, you know?” Kimmel told Extra’s Rachel Lindsey. “When they read the wrong winner one year when I hosted the Oscars, we had to make mention of that the next year.”How exactly that will be addressed remains to be seen.

What you can count on is political talk from Kimmel. The late night host has never shied away from politics or politicians. The tone will most certainly be set in the coming months.
Kimmel hosts the 95th Annual Academy Awards on Sunday, March 12, 2023.