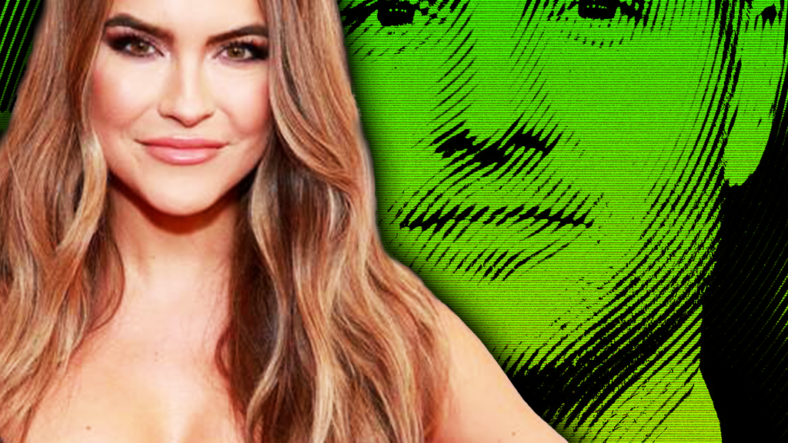 The third season of Selling Sunset– which premiered last Friday on Netflix- largely revolves around star Chrishell Stause getting a divorce from This Is Us star Justin Hartley.

On the season, Stause shares her side of the story and paints a very sad picture of what happened; however, we have exclusively learned from a source close to the Selling Sunset cast that reality is very different than the “reality” being painted on the reality show.

Back in July of last year, TMZ exclusively reported that Hartley and Stause were separating after only having been married for two years.

While TMZ revealed that Hartley had filed paperwork claiming “irreconcilable differences,”TMZ said it seems to have “come out of the blue” as Hartley and Stause had been seen together the week before Hartley filed for divorce. They noted at the time that “something must have happened.”

TMZ later updated their story to state that Hartley had listed the date of separation as “July 8th, 2019” which they said was bizarre as Hartley and Stause had been seen together “a number of times” since. They also revealed at the time that Hartley had requested Stause pay her own legal fees and was not wanting to pay her any spousal support.

While not a ton of details have been released about their divorce, the conversation started to heat up again due to Selling Sunset returning to Netflix- and their divorce, as we mentioned, plays a huge part in the show.

“I’m just kind of in shock with it all,” Stause tells fellow cast member Mary Fitzgerald about her divorce on an episode this season. “I’m trying to keep it together, but it’s just a lot all at once ’cause everybody in the whole world knows like at the same time that I knew. Have you ever been knocked over by a wave and you don’t know which way to swim to get up? I don’t think anyone ever gets married thinking that they’ll get a divorce. I’m definitely a hopeless romantic, and I feel stupid even saying that out loud.” 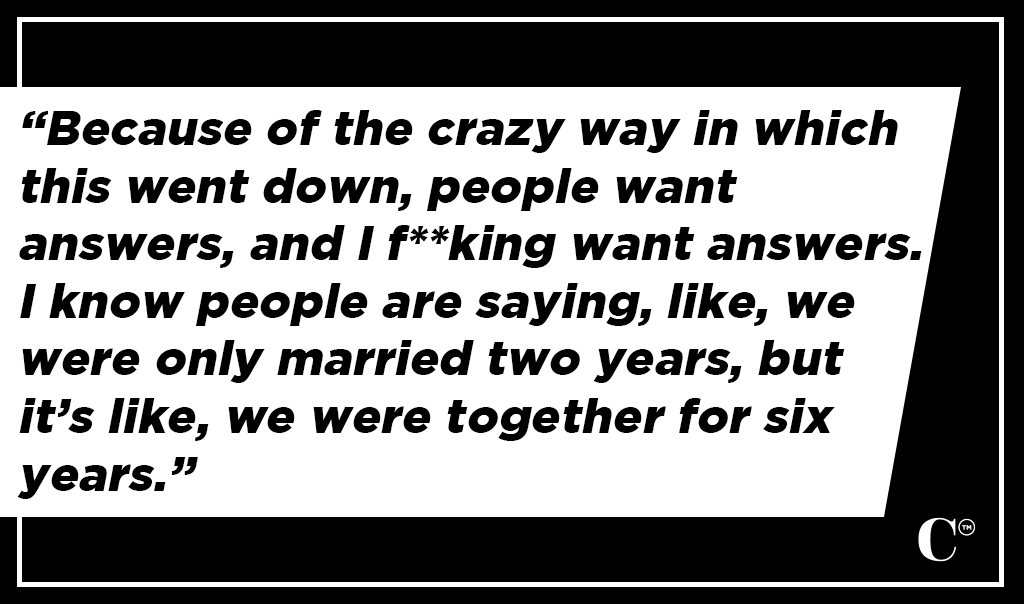 The episode before her divorce went public, Stause had organized a charity fundraiser in which she was auctioning off items including “coffee with Justin Hartley.”

Stating that she “thought we were totally fine,” Stause goes on to note that “We had a fight that morning over the phone. I never saw him since. We didn’t talk things through. Before we had a chance to figure anything out, he’d filed.”

She found out by text…

Stause also revealed how she found out about the divorce, explaining that “I found out because he texted me… that we were filed. 45 minutes later, the world knew.”

Stause still had more to say in the conversation with Fitzgerald, noting that “Because of the crazy way in which this went down, people want answers, and I f**king want answers. I know people are saying, like, we were only married two years, but it’s like, we were together for six years.”

“I talked to him right after because I thought that must be a joke,” Stause added, “but that was kind of the end of the communication. What am I supposed to say? What do you say after that?”

Stause still had more to add, explaining that “When I found out, I was minutes before leaving the house for work, so I immediately just grabbed a few things, and I just got out of there as fast as I could. I don’t think I really knew where I was going or what I was gonna do, but I just had to leave.”

Stause also stated that “Now I have to find a place to live; now I have to scramble and figure this out.”

READ MORE: “Selling Sunset Star Mary Fitzgerald- A Lot Has To Be Done For Me To Trust Christine Quinn Again”

“When I think of marriage,” Stause further elaborated, “I think of: You know, you work on things with people if they’re not perfect — no one is. You work on it. You talk about it. You don’t go out looking for greener grass; sometimes you have to water the grass that you have,” she said. “And that’s what marriage is. Sometimes it can be hard. I don’t think it should be more hard than easy, at all, but that’s why I’m so confused, because I didn’t feel like that balance was off. I just feel stupid.”

Chrishell Has More To Say About Justin

There is still more Stause had to say about her marriage to Hartley throughout the season, including the following:

In an US Magazine exclusive, a source dished a bit on Hartley’s reaction to Stause airing all of this on Selling Sunset. 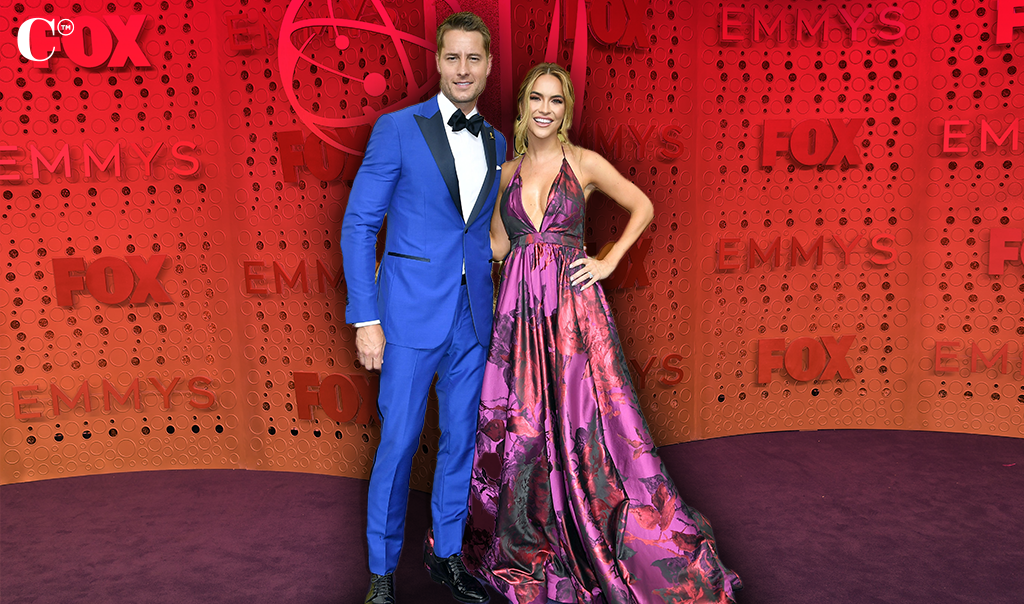 Their insider stated that “Justin has not watched the episodes but has been alerted to what is said. He’s irritated that she’s airing their private information publicly and knows there is more to the story than is being told. His close friends and family know what really happened, as does Chrishell, so ultimately it’s her choice of what is put out there.”

“The claims made in the show that something changed in Justin after his This is Us fame are completely false,” US Magazine’s source went on to add. “Chrishell knows that’s not what happened, so for her to let people believe that is upsetting to him.”

In an interview with ET Online last month, Hartley noted that “I’m a happy guy. I sleep like a baby. I don’t have anything on my mind I treat people the way I want to be treated and I have lovely friends who love me and I love them. And I’ve got this wonderful daughter, and I’ve got a great family, and I am a very, very lucky, lucky individual.”

So Why Did Chrishell Share Her Divorce On The Show?

In an interview with The LA Times, Stause spoke about why she decided to air her divorce drama on the show.

“It was a little bit of a struggle for me to decide to go forward and have the camera there for these really raw moments,” Stause explained. “But I am really, really, really proud of my second career in real estate. So I thought, if I was losing something that I thought was half of my life, how is it going to help me to throw away the other part of my life that I’ve worked so hard to build? If I walk away from that too, what am I left with?”

“To be honest with you,” Stause added, “in my position, even if I took every step perfectly, I’m still in a position to lose, because I’m still dealing with the public divorce in the public eye. It is what it is, and with the cameras there, I just did the best I could.” 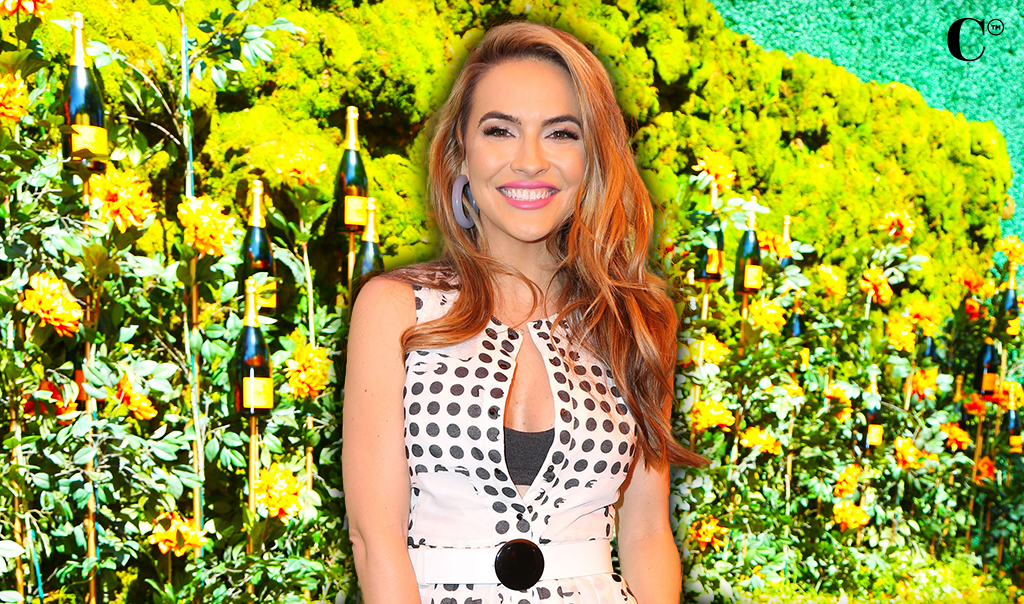 Stause elaborated by saying “That being said, I like the way that they handled it on the show,” she continued, hopeful that viewers going through a similar experience will be able to relate and feel less alone. “It does give a little bit of purpose to the pain.”

Interestingly, in the same interview, Selling Sunset creator Adam DiVello noted they ran the scenes they were going to use by Stause to ensure she was comfortable with what was going to air.

“I think it’s terrible that she knows there’s another side to the story and she’s just letting him get slammed,” our insider began by sharing with Celeb. “She’s blaming her silence on legal reasons, but she painted a picture that makes her look innocent when that’s not the case.”

“There is definitely more that the public doesn’t know,” Celeb‘s source added. 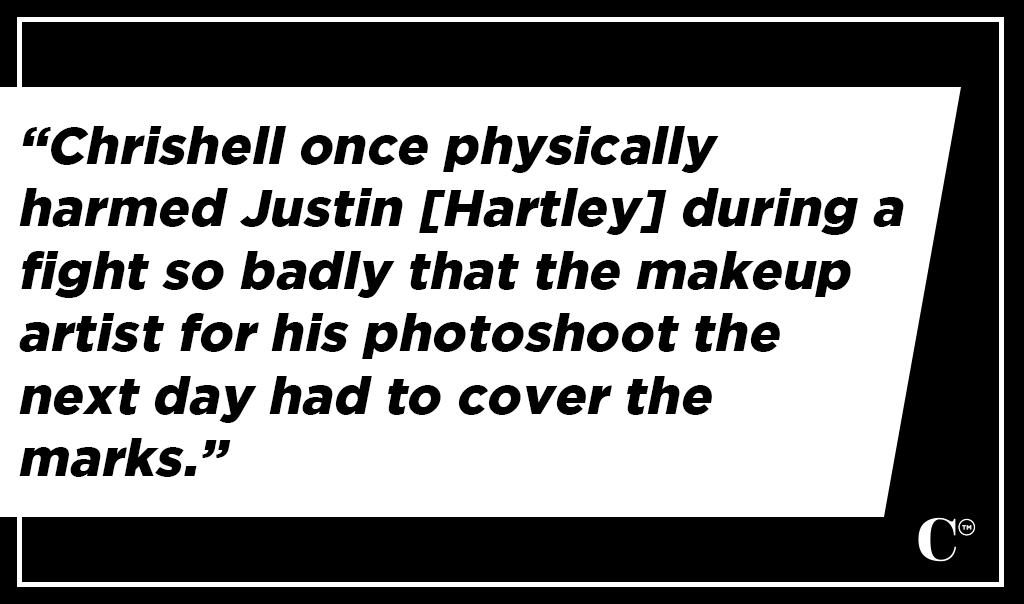 So what is it that the public doesn’t know?

Celeb’s insider alleged Chrishell has a history of being violent and the source claims that Chrishell “once physically harmed Justin [Hartley] during a fight so badly that the makeup artist for his photoshoot the next day had to cover the marks.”

Celeb‘s insider also noted that there have been “alleged rumors of infidelity” on Stause’s part; however, it should be noted that Stause has liked tweets alleging Hartley was unfaithful, which we discuss more below.

As if this wasn’t shocking enough, Celeb‘s insider went on to share how Stause even got onto Selling Sunset in the first place.

“She begged producers to cast her on Selling Sunset,”Celeb‘s source stated. “She offered appearances from Justin [Hartley] to add star power to the show. The only reason she was cast was for this reason but then she didn’t deliver.”

“So,” Celeb‘s source elaborated, “there has been rumblings amidst the cast that Chrishell has gone out of her way to do whatever it takes to not only secure her spot on the show, but to get the best edit and preferential treatment.”

Celeb‘s source wrapped with saying that, “It’s clear there is a lot more to this story than she’s letting on and people would be wise to wait until Justin’s side is out before so blindly having her back and bashing him.”

But Did Justin Cheat?

A new US Magazine story came out today and it denotes that Stause is “now liking tweets that allege” that Hartley cheated on her. 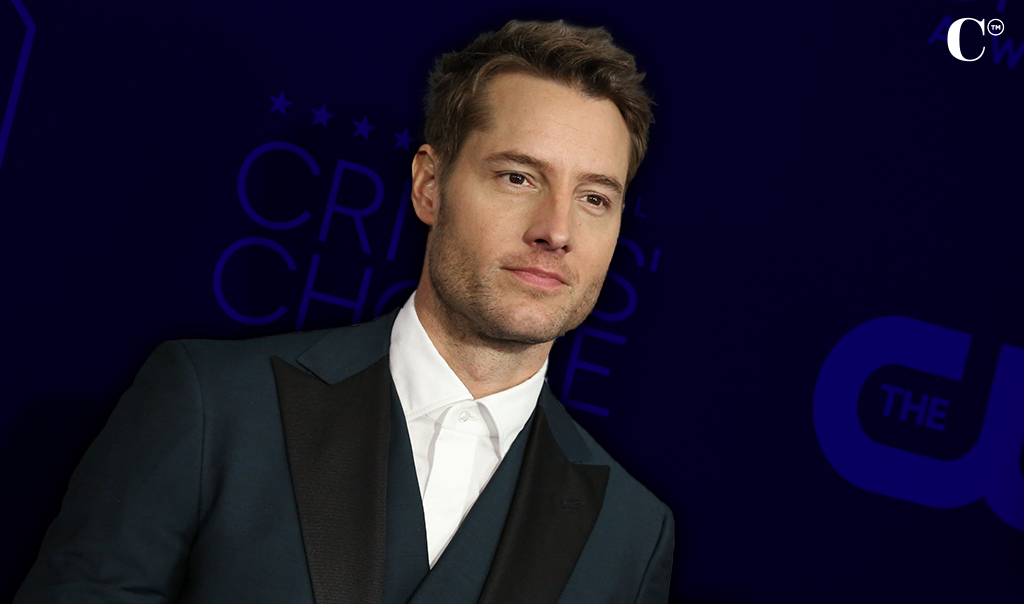 As US Magazine mentions, one of the tweets Stause liked was from August 7th, where someone tweeted “@justinhartley filmed a movie in Canada at the same time his new gf @SofiaPernas was filming the summer before they split. The timing seems like he probably cheated on @Chrishell7 and took a coward’s way out to avoid spousal support and gaslight her.”

The report mentions that Stause liked a tweet by Blind Gossip, linking to their story detailing that a “celebrity couple” split after the male in the relationship “fell in love with another woman.”

A source reportedly “close to Hartley” spoke to US Magazine and claimed Hartley did not cheat and any allegations claiming he did are “absolutely false.”

Upon receiving the information from our insider, we reached out to Stause’s publicist for a statement in an effort to allow her to respond to these allegations.

In addition, Plonsker adamantly denied any affair on Stause’s behalf, saying that Stause “has not had an affair.”