Kanye Suspended from Instagram After Lashing Out with Racial Slur

Kanye West is lashing out again on Instagram in a series of targeted posts after ex-wife Kim Kardashian‘s new beau Pete Davidson taunted him with a bedroom selfie. The feud between the pair has come to a head in recent days after Ye posted a video showing a stylized version of himself killing and decapitating a stylized version of Davidson, before buying him in the desert. From there, Davidson and Kardashian have remained relatively off the radar in response – until Davidson taunted West with a selfie of himself in Kardashian’s bed. Here’s what’s happened since then, including an Instagram ban for violating hate speech policies.

Banned for 24 Hours for “Hate Speech”

West has now been banned on Instagram for 24 hours after posts he made today violated Meta’s policies on hate speech. TMZ reports, “Kanye West is being put in Instagram timeout after going after Kim, Pete, Pete’s writing partner and a racist attack on Trevor Noah.

A spokesperson for Meta tells us Kanye’s recent posts violated Instagram’s policies on hate speech, harassment and bullying. As a result, we’re told his account has been suspended for 24 hours — where he won’t be able to post, comment, send DM’s, among other things.

This is the first time West has faced official sanctioning of any kind for his antics, including the music video which saw threats against the life of Davidson – and YouTube has opted not to remove.

The post that likely triggered the ban, detailed below, has already been deleted – but it was too late for Meta which felt the rapper has gone too far this time.

The Feud with Pete Davidson 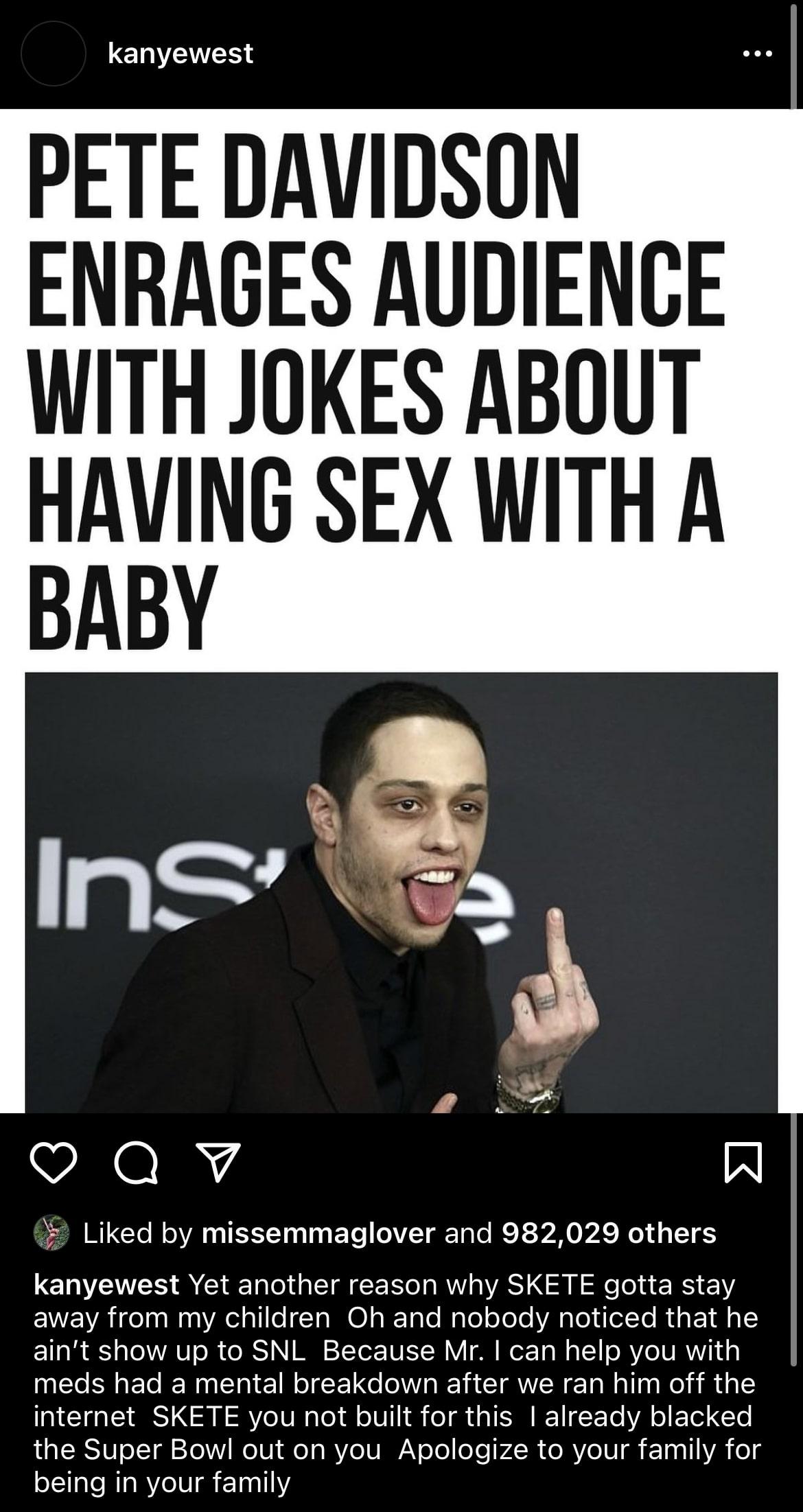 The feud between Kardashian’s ex and her current boyfriend is nothing new, but it’s reached fevered new heights in recent days. On March 2, West kicked it up a notch when he released a music video for his song “Eazy,” and the video – well, it was a doozy. A claymation West killed, decapitated, and buried in the desert a claymation Davidson. Roses then grew from the buried body and severed head of Davidson’s remains. A truck full of roses – exactly like the one West had delivered to Kardashian in the real world for Valentine’s Day – then drove across the screen.

The video ends with the words “everyone lived happily ever after / except s̶k̶e̶t̶e̶ you know who/ JK he’s fine.”

Kardashian and Davidson have been very reserved in their responses to West, preferring to live their lives and focus on Kardashian’s co-parenting peacefully with West, even as the rapper appears to spiral out of control. Davidson tried reaching out via text to West to keep things civil, reassuring the rapper that he wasn’t going to try to parent his children. West blasted him online, before – of course – deleting his social media posts. Davidson appears to have offered to help West seek mental health care, and West subsequently mocked him for his use of medications, at one point saying he was concerned that Davidson would get Kardashian hooked on drugs.

But that peaceful approach all seemed to come to an end with Davidson taunting West.  During a heated back-and-forth between Davidson and West, the latter asked Davidson where he was – and the comedian replied, “In bed with your wife” along with a shirtless selfie of himself. 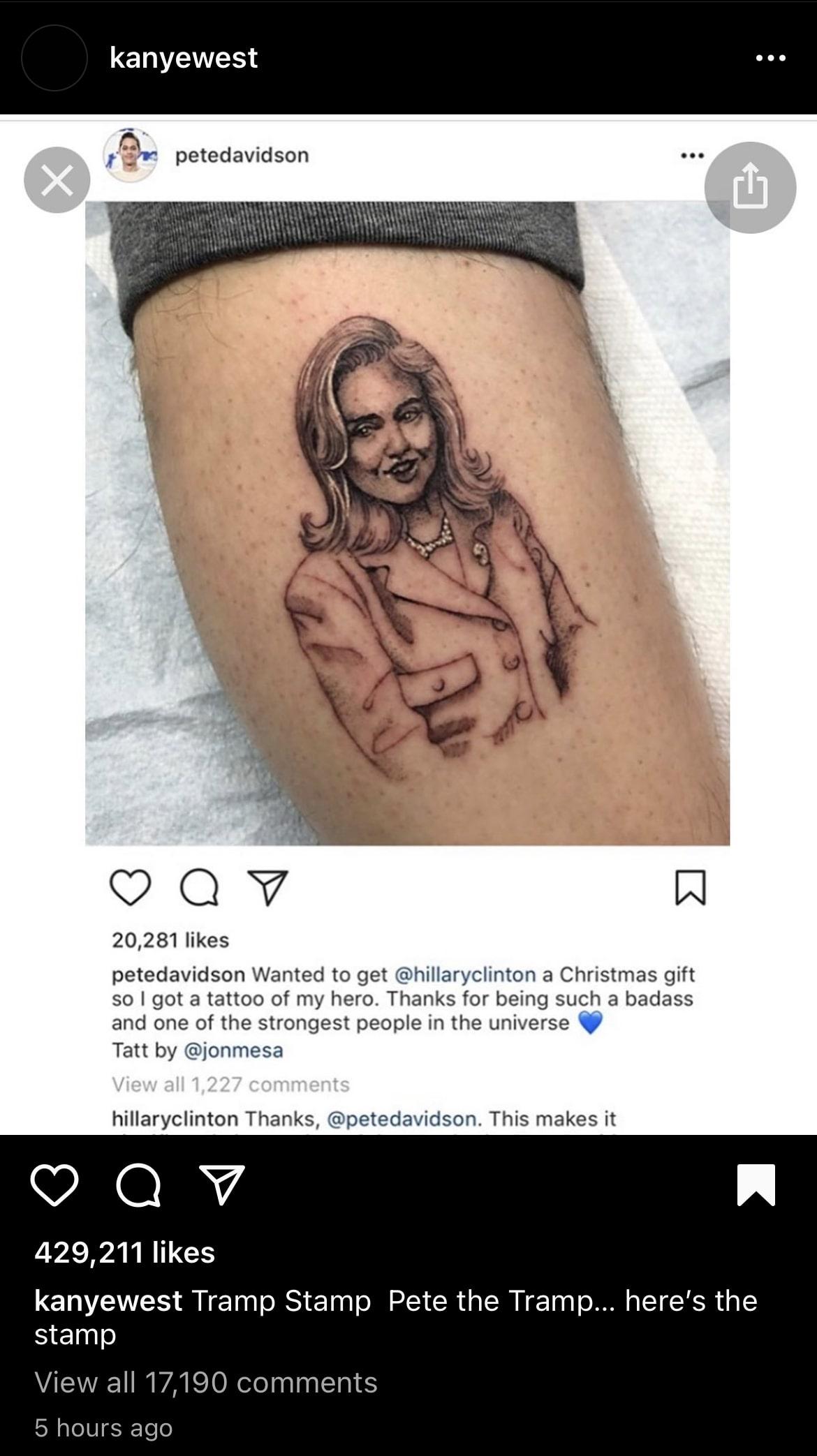 It would appear that this has set West off, and he’s unleashed a tirade online against Davidson, including sharing a screenshot of an article titled, “Pete Davidson Enrages Audience with Jokes About Having Sex with a Baby.” West explained in the caption, “Yet another reason why SKETE gotta stay away from my children  Oh and nobody noticed that he ain’t show up to SNL  Because Mr. I can help you with meds had a mental breakdown after we ran him off the internet  SKETE you not built for this  I already blacked the Super Bowl out on you  Apologize to your family for being in your family.”

In addition, West shared a picture of a Davidson tattoo of former Secretary of State and presidential candidate Hillary Clinton, with the caption, “Tramp Stamp  Pete the Tramp… here’s the stamp.”

Later, West added a post with a still from his “Eazy” video of the stylized West leaning over the stylized version of Davidson’s decapitated head, trimming roses from the corpse with the caption, “Y’all ready for Coachella” with a skull and crossbones emoji. So far, neither Kardashian or Davidson have responded to West’s latest volley. 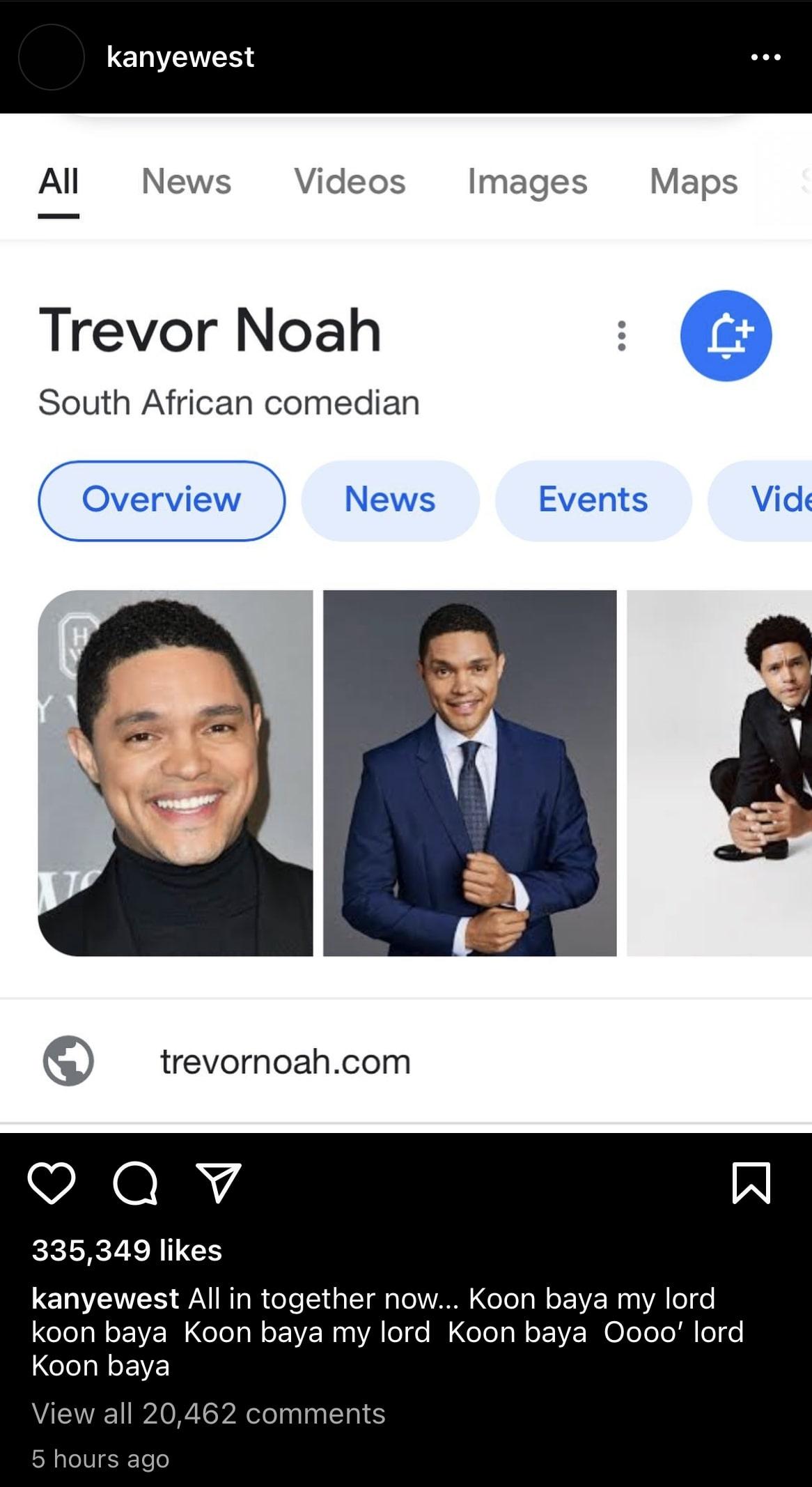 Of course, it’s not just Davidson drawing West’s ire online this week. West also took a shot online at Trevor Noah – host of The Daily Show. In a March 15 monologue, Noah addressed the way society is responding to West’s threats and escalating behavior. US Weekly shares, “‘What’s weird about the situation is Kanye West has told us that he struggles with his mental health,’ the political commentator shared during an episode of the Comedy Central series. ‘So I get it, you wanna have art as therapy. But here’s what’s weird that Kanye doesn’t understand. It’s like, what we’re seeing is — it makes you uncomfortable.’

Noah continued: ‘With Kanye, we don’t know how to feel. We don’t know how to worry. I think Kanye doesn’t seem to understand that. He goes, ‘Leave me to create my art.’ Yeah but Kanye, you told us you have problems. Now when we worry about that, you say we shouldn’t worry because it’s not [his] problem. Or it is [his] problems? Which is it?’”

West apparently didn’t like Noah’s address to the nation over his antics, and fired at him online with a racial slur in an Instagram post that has since been deleted. The caption read, “All in together now… Koon baya my lord koon baya  Koon baya my lord  Koon baya  Oooo’ lord Koon baya.”

It would seem that Noah has learned the lesson many in West’s orbit are learning recently: no good deed goes unpunished. 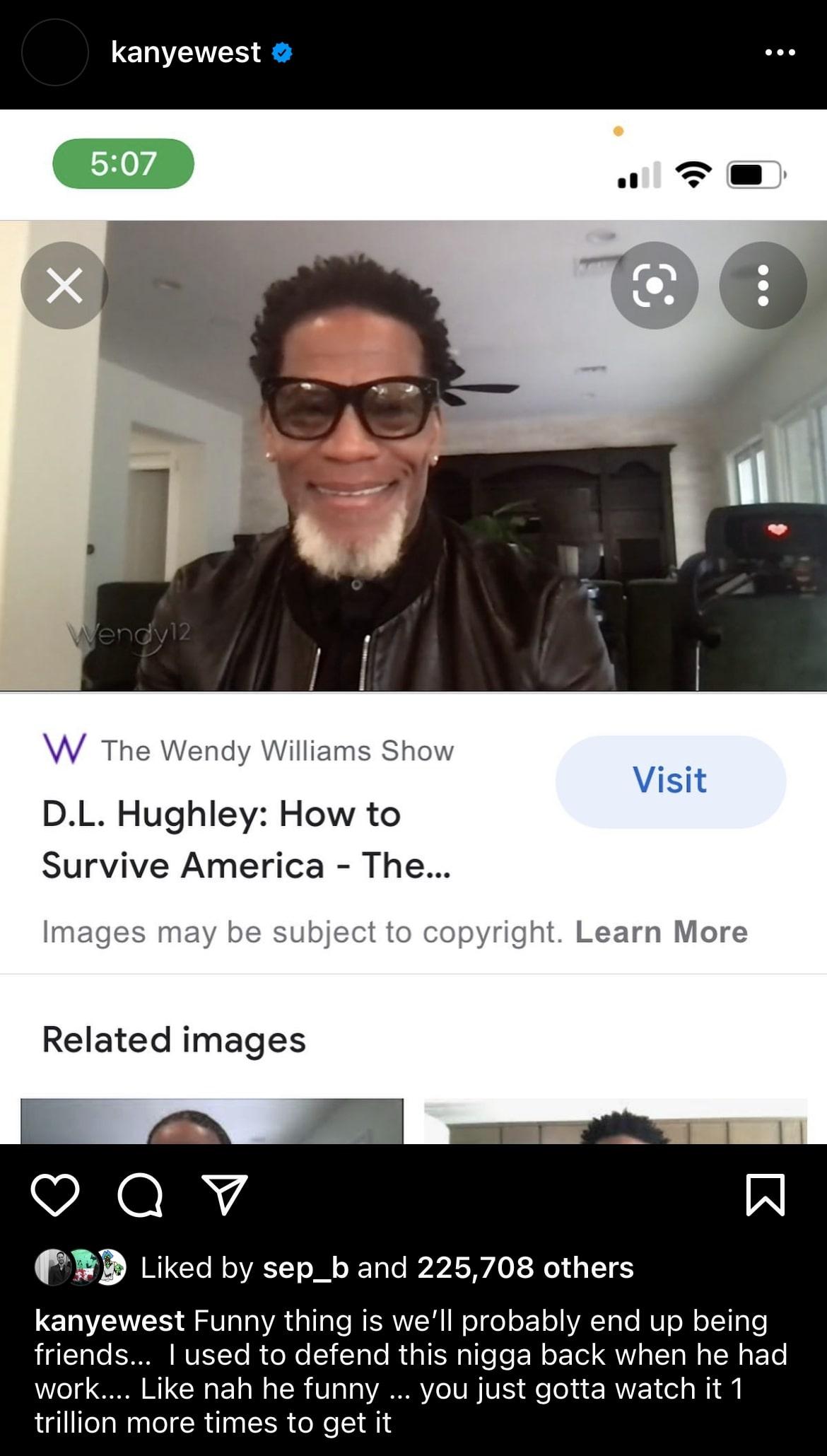 DL Hughley also received the sharp side of West’s online tongue today. Hughley posted on social media that West’s behavior was wrong, mocking his antics and taking swipes at him for his unfolding mental health crisis. Hughley has pulled no punches, stating clearly that West has been “stalking” Kardashian as the divorce plays out. 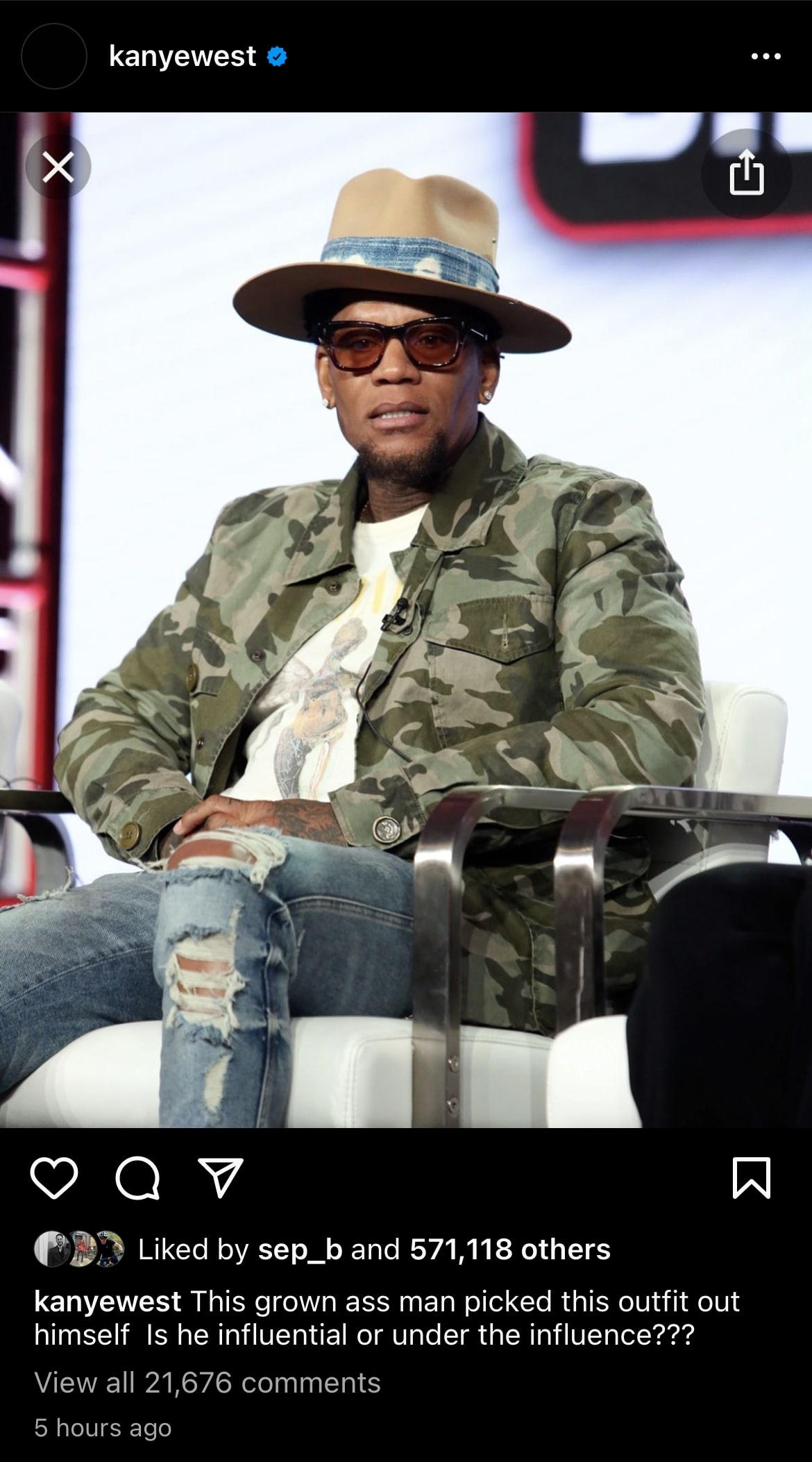 In response, West lashed out initially with a now-deleted post that read, “DL Hughley is a pawn Yeah I know a king not supposed to address a pawn but I address everything and find addresses DL So don’t speak on me or my children I can afford to hurt u.”

Per HipHop Wired, “Hughley responded hours later on Twitter, referencing Ye’s mental health: ‘Hmmm! Ain’t it weird that #Kanye supposedly has all these goons who will kill for him, but not one of them will get his prescriptions filled? Here’s a thought while you’re on your way to kill me in Calabasas, how about somebody drop by CVS and pick up his Xanax! Lol #TeamDl.’”

Hughley added, “It’s just too bad that you acting like a nut won’t stop [Pete] from bustin one!!”

Today, West posted another two swipes at Hughley, including one with a caption that read, “Verified

Funny thing is we’ll probably end up being friends… I used to defend this n—a back when he had work…. Like nah he funny … you just gotta watch it 1 trillion more times to get it.” And another that read, “This grown a– man picked this outfit out himself Is he influential or under the influence???”

West’s behavior continues to escalate, as more and more disconnected and worrying posts pop up and then are quickly deleted. West has publicly shared that he suffers from bi-polar depression, and his recent behavior aligns with someone in an unmedicated manic state. It’s a concern for Kardashian, who may have to take more drastic measures to ensure the safety of herself and her children – along with her new boyfriend – if West doesn’t seek help soon.

As the children get older, they’ve become more aware of the drama unfolding around their lives. Elle reports that a source has spoken to Entertainment Tonight about Kardashian’s concerns as the days wear on; “Kardashian is carefully considering her future options. ‘If Kanye doesn’t stop, she knows she will be forced to take more drastic measures,’ the source said. ‘She just doesn’t want anything bad to happen.’

A second source told Entertainment Tonight that Kardashian and West could end up in court over child custody. ‘Kanye has told his lawyer he wants a more formal custody agreement with Kim,’ that source explained. ‘The two currently have nothing in place, but Kim has the kids, and Kanye is allowed to see them whenever he wants, within reason. Kanye feels he’s not been getting enough time with his children and if his lawyer can’t work something out with Kim will go to court.’”

Unfortunately for West, his recent behavior almost ensures that a formal arrangement won’t work in his favor. And with no one in his life clearly making sure he understands this, the situation will likely end in more heartache for the rapper. However, considering the escalating threats of violence, heartache seems like an acceptable lesser cost.