As we’ve been covering this week, Kanye West has been quite busy. First, he held his first Presidential campaign rally (side note- make

As we’ve been covering this week, Kanye West has been quite busy. First, he held his first Presidential campaign rally (side note- make sure to order a Kanye For President tee-shirt here). At the bizarre rally, he made numerous outlandish statements including one about Harriet Tubman not freeing slaves and one about almost killing his daughter, North West. Then, he went on a Twitter rant where he accused wife Kim Kardashian of trying to lock him up and claimed his mother-in-law Kris Jenner was not allowed around his kids. After that, he announced his new album, Donda.

Then, late last night, West went on another shocking Twitter rant where he made some serious confessions and accusations. 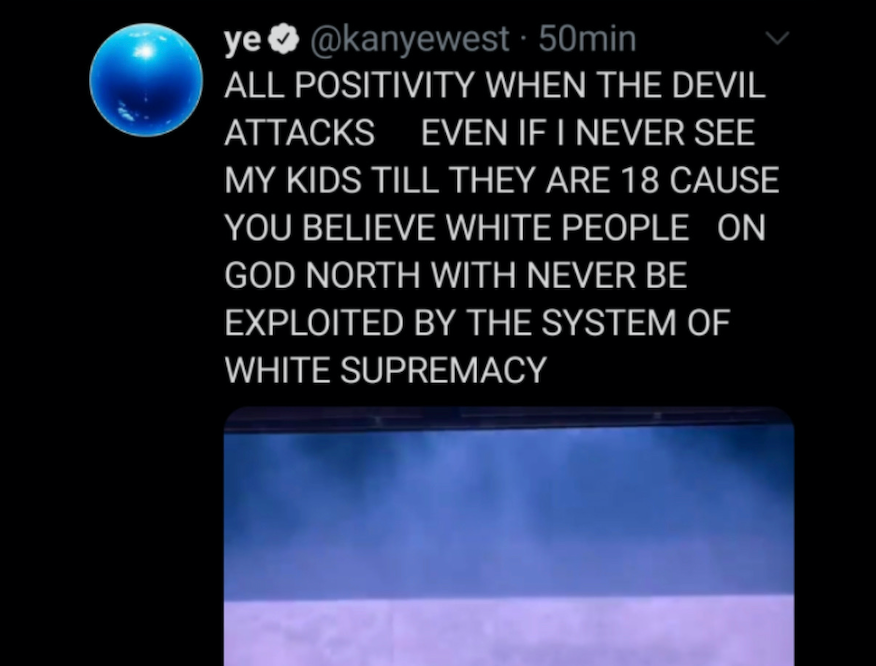 Kanye began with tweeting “All positivity when the devil attacks. Even if I never see my kids till they are 18 cause you believe white people on God North with never be exploited by the system of white supremacy.”

This first tweet was particularly interesting, as he intimates someone may be trying to keep his kids from seeing him. So what does he mean by white supremacy?

West made this very clear in his next tweet. 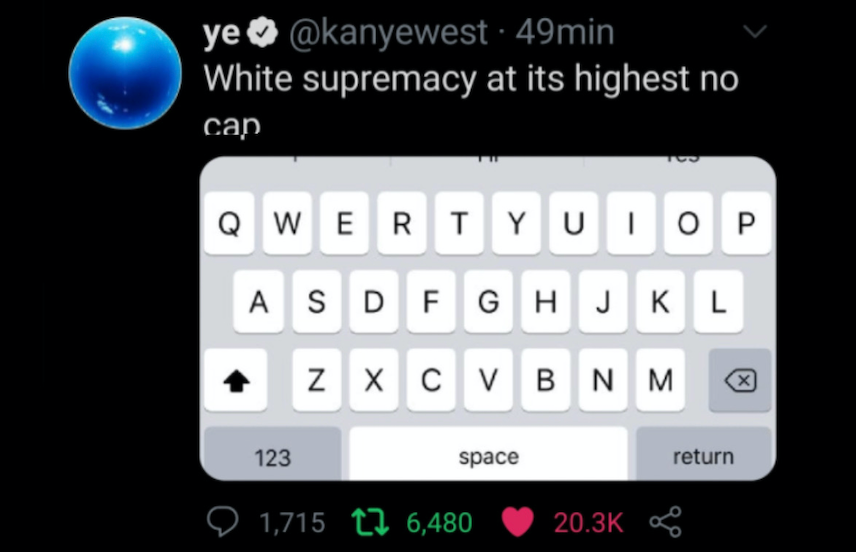 “White supremacy at its highest no cap,” he tweeted.

He attached the following screenshot of a conversation with Kris Jenner (the first text message he included in his Twitter rant the other evening, and now he is showing the world the second text he sent her last night): 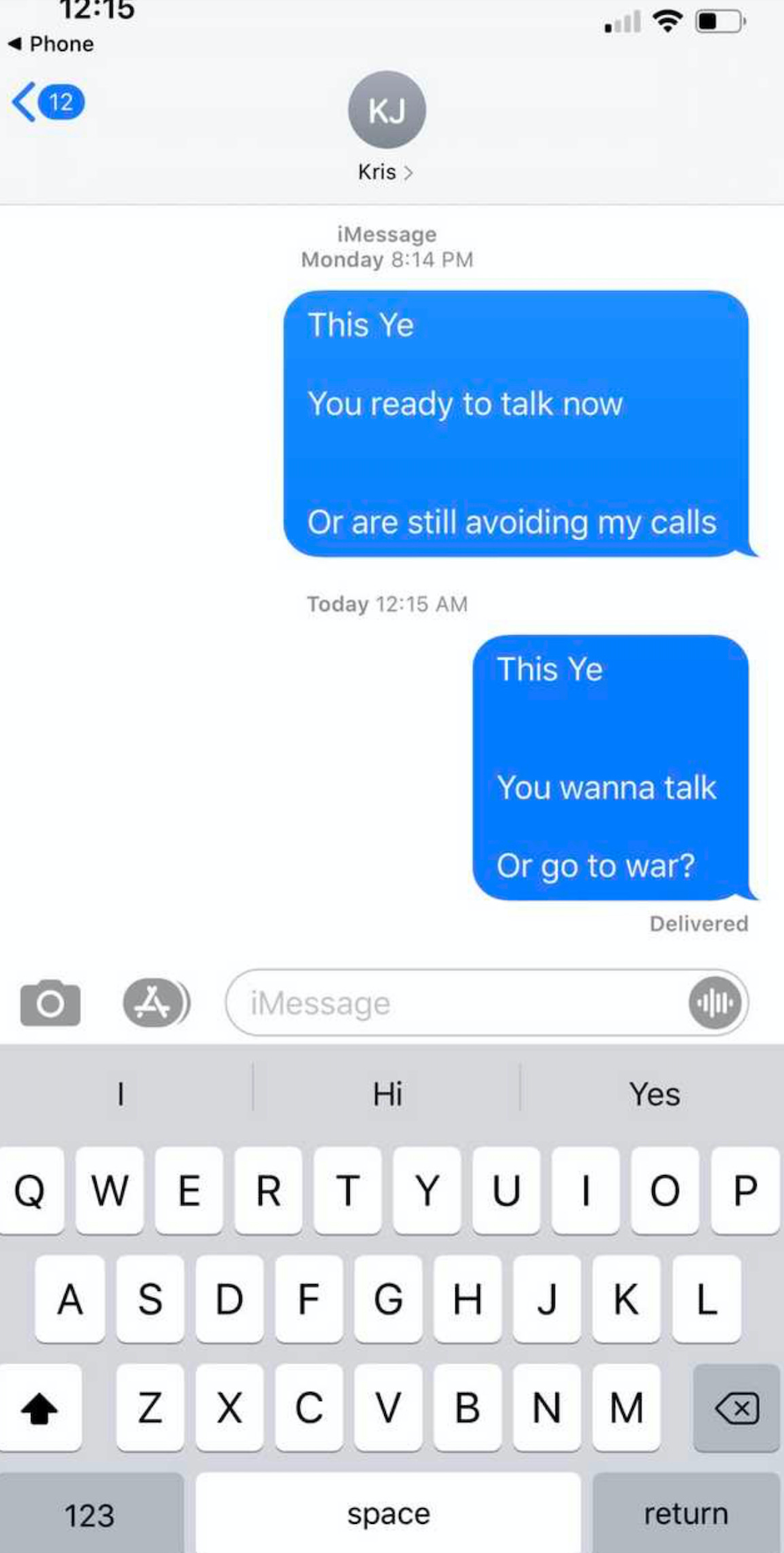 As you can see above, he texted Kris Jenner asking her if she wants to talk or go to war. 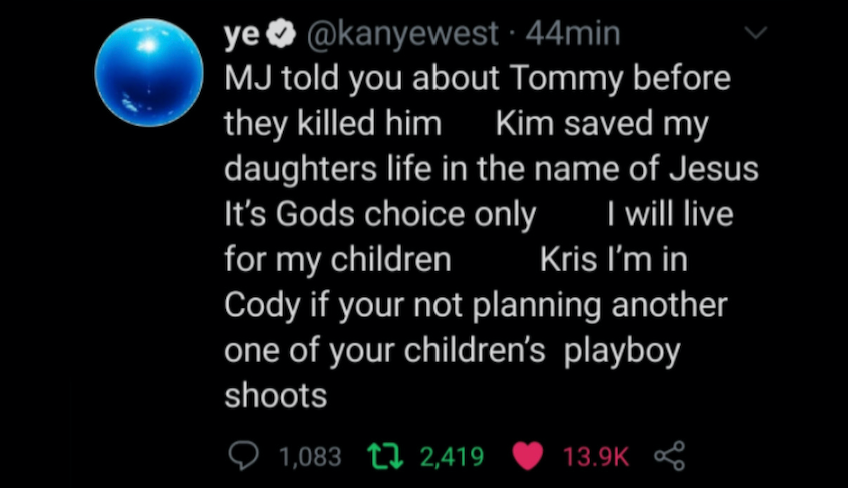 West’s next tweet read “MJ told you about Tommy before they killed him. Kim saved my daughters life in the name of Jesus. It’s Gods choice only. I will live for my children. Kris I’m in Cody if you’re not planning another one of your children’s playboy shoots.”

This tweet has a lot to break down. First, by “MJ” it seems he is referring to late singer Michael Jackson and implying record executive Tommy Mottola killed him/had something to do with his death.

West next claims Kim saved North’s life, which is likely in line with comments West made at his campaign rally about he and Kim deciding not to abort the pregnancy.

He lastly calls his mother-in-law out for “planing Playboy shoots” for her daughters. 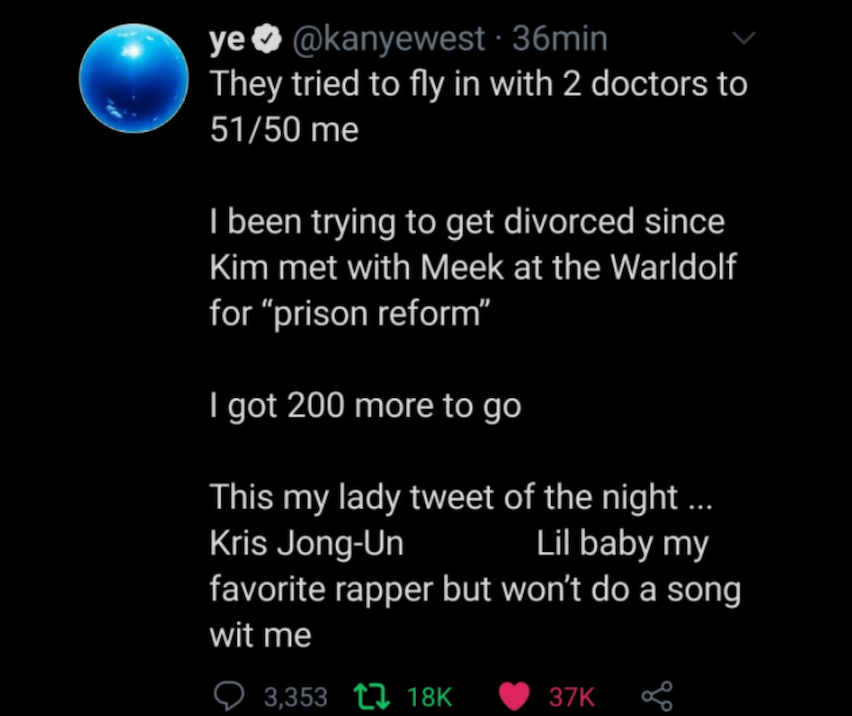 West’s next tweet reads “They tried to fly in with 2 doctors to 51/50 me. I been trying to get divorced since Kim met with Meek at the Warldolf for ‘prison reform.’ This my lady tweet of the night… Kris Jong-Un. Lil baby my favorite rapper but won’t do a song with me.”

Yet again, there is a lot to break down here.

First, West claims “they”- which we assume is Kris and Kim- came in with two doctors to get a “51/50” on him. A 5150 hold is where a person with mental illness can be involuntarily held in a psychiatric institution for up to 72 hours against their will.

West then shockingly claims he’s been trying to get divorced, and claims the reason has something to do with rapper Meek Mill. Specifically, he implies that Kim cheated on him with Meek Mill.

Then he seems to compare his mother-in-law to North Korea’s Supreme Leader Kim Jong-un. 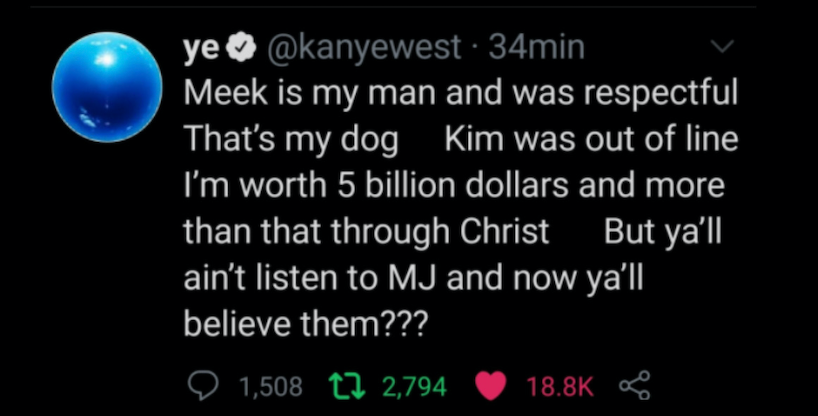 “Meek is my man and was respectful,” West said in his next tweet. “Kim was out of line. I’m worth 5 billion dollars and more than that through Christ. But y’all ain’t listen to MJ and now ya’ll believe them???”

Interestingly, in this tweet, he seems to have more of an issue with Kim than Meek. He also brings up Michael Jackson again, seemingly implying people didn’t listen to what Michael Jackson was saying but somehow are believing what people (likely Kim and Kris) are saying about him.

“Kriss and Kim put out a statement without my approval,” West then tweeted, calling out his wife and mother-in-law again. “That’s not what a wife should do. White supremacy.”

“Says the future president,” he followed this up with, referring to his current campaign running for President of the United States of America. 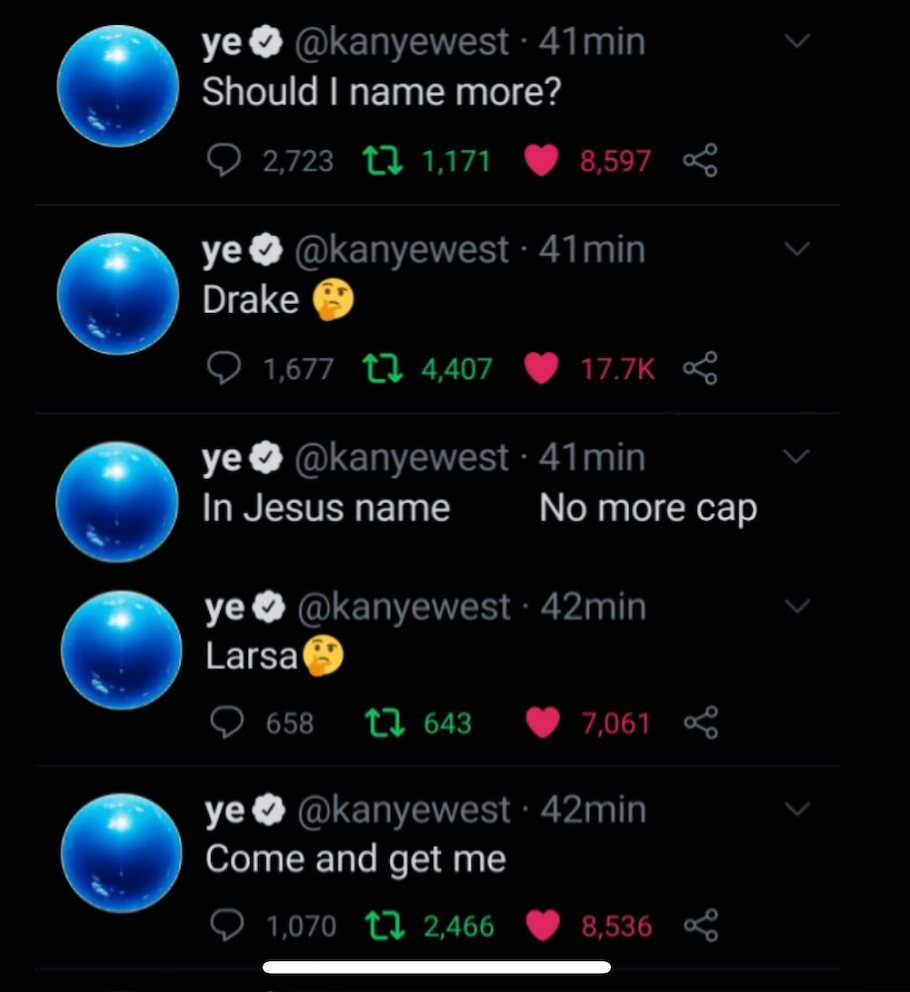 West then issued the following series of quick tweets:

As some on social media pointed out, it seems Larsa is referring to Larsa Pippen. One Twitter user (@dissheet) guessed this had to do with recent photos of Pippen and her 12-year-old daughter “twinning” in bikinis. They thought that West may be implying he didn’t want Kim sexualizing North. This Twitter user also had more thoughts about West mentioning Michael Jackson and Tommy Mottola: 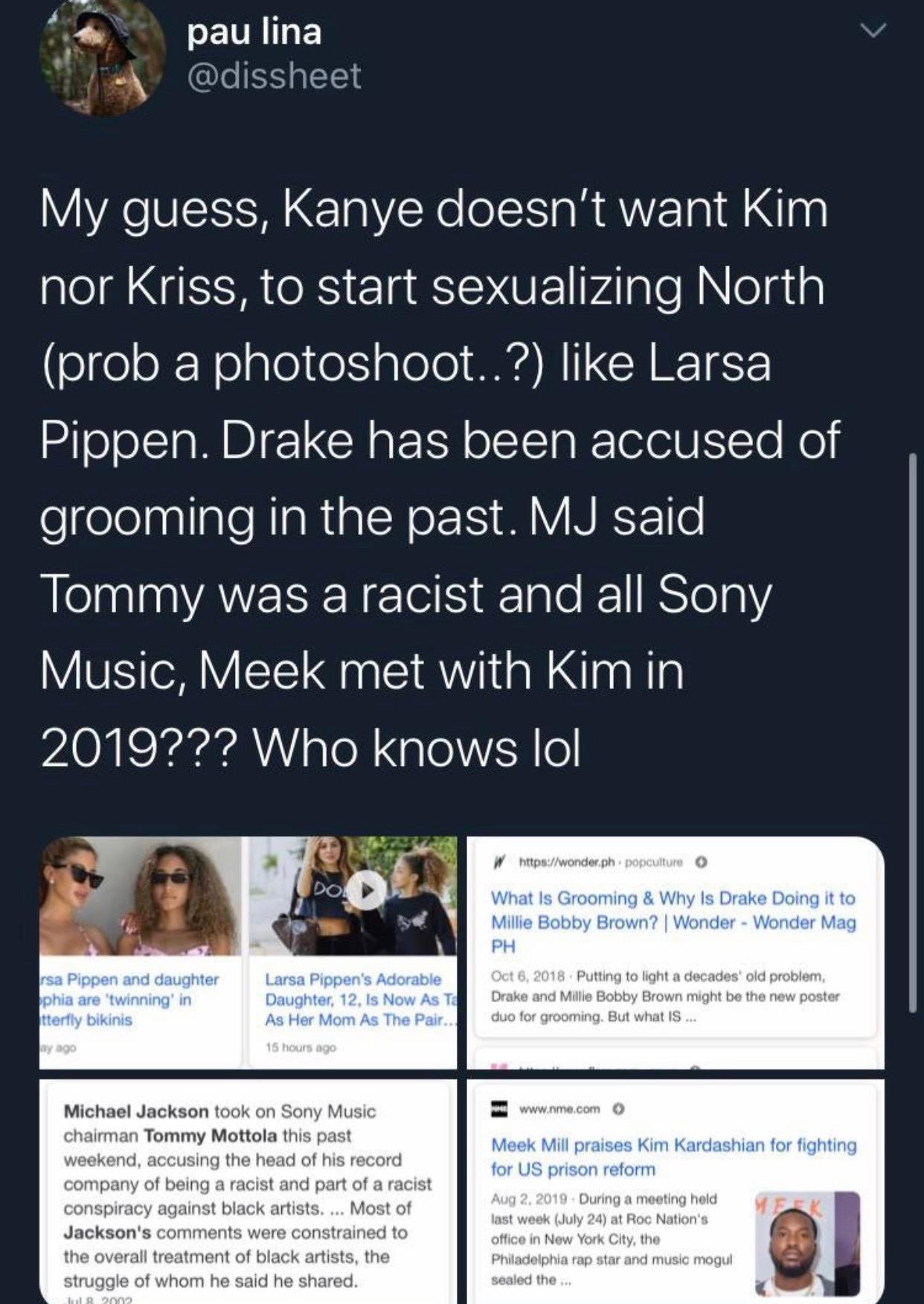 Aside from West mentioning Pippen, he also mentioned rapper Drake. This likely has to do with long-standing rumors regarding Kim and Drake hooking up. 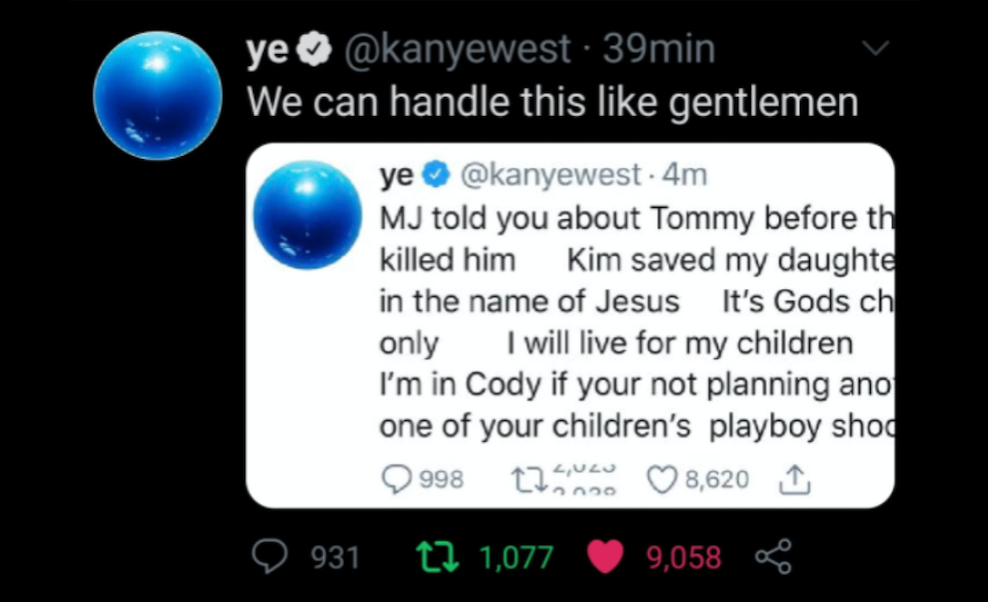 West then quoted one of his earlier tweets, adding “We can handle this like gentlemen.”

At this time, all that currently remains of last night’s Twitter rant is the tweet where West says “Says the future President.”

Also on his Twitter current is the following image which he captioned “DND: WTH CHLD this Friday”: 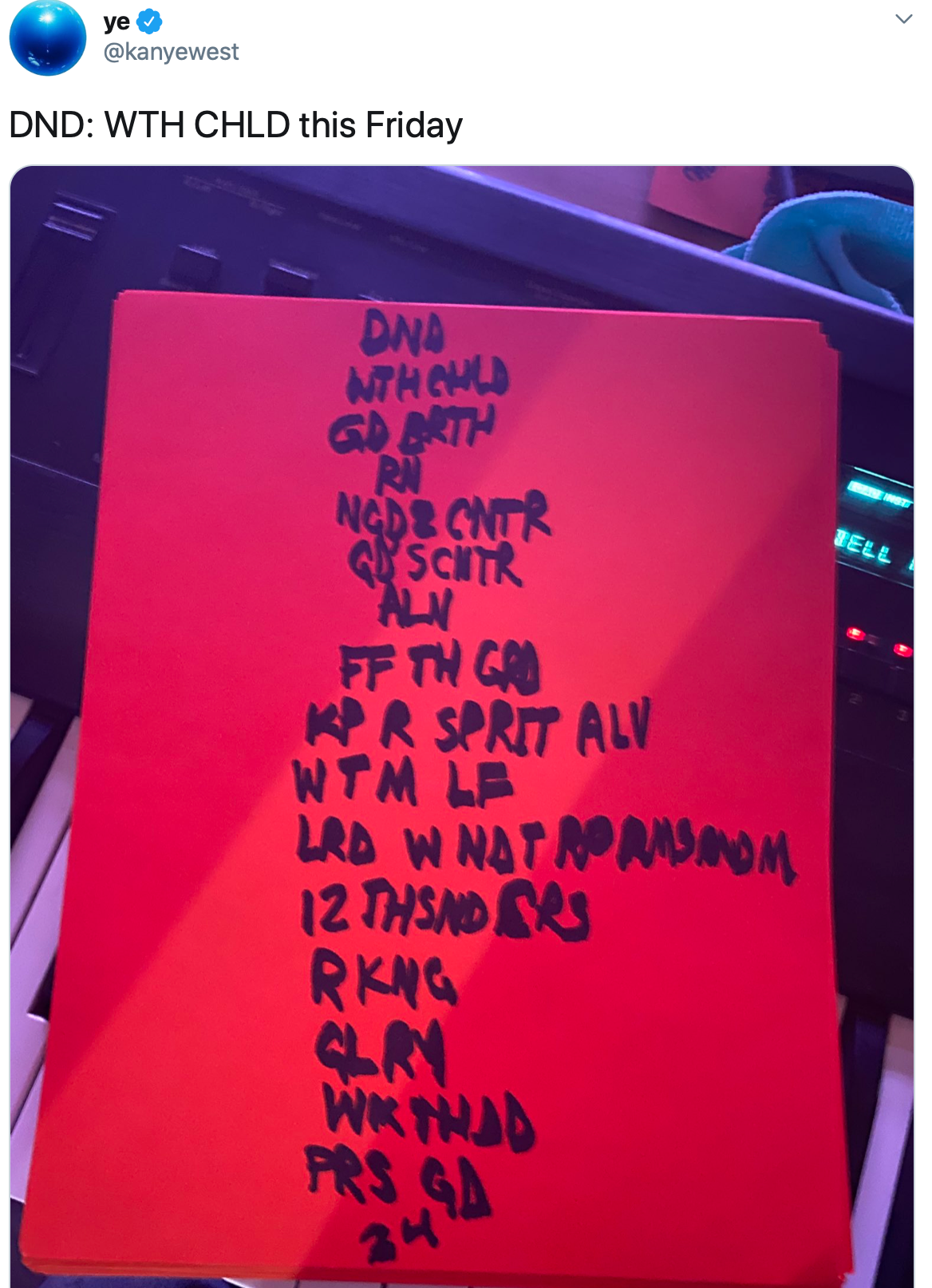 This likely is a track list of some sort for his new album, Donda, which comes out this Friday.

Since his rant, some internet sleuths have found lyrics in a Meek Mill song called “Respect The Game” from 2018 that they believe could potentially be about Kim.

While it’s uncertain if this is actually about Kim or not, some definitely think it is.

UPDATE: Kim has broken her silence on the situation. View her statement on our Instagram below:

No marriage is perfect – we truly hope @kimkardashian and #kanyewest find their footing again. Here is #kimkardashian’s official statement on #Yeezy’s recent behavior. Kanye’s deleted twitter rants are in the #linkinbio if you missed them. ❤️ ✊ #divorce #affair #meekmill #bipolarawareness

For now, this is the latest update on Kanye and Kim. Stay tuned, as we are sure there will be more to come.

If you are in crisis or you think you may have an emergency, call your doctor or 911 immediately.