Which Kardashian/Jenner Kid Will Be the First Billionaire?

The Kardashian family has been building an empire for decades. From not-so-humble famous beginnings with patriarch Robert Kardashian gaining notoriety

The Kardashian family has been building an empire for decades. From not-so-humble famous beginnings with patriarch Robert Kardashian gaining notoriety during the OJ Simpson trial, to daughter Kim Kardashian‘s infamous sex tape, Caitlyn Jenner‘s Olympic career and political aspirations, reality mega-hit Keeping Up With the Kardashians, and a retail empire that grows seemingly by the day, the family has its fingers in just about every pie.

One question about the family’s Hollywood success story is as yet unanswered: with one (Kim) Kardashian and one (Kylie) Jenner having already attained billionaire status, someone’s likely to be next. But we’re not looking at the Kardashian/Jenners – we’re looking at their offspring, who are numerous and famous in their own rights now. Which Kardashian/Jenner kid will be the first billionaire? CELEB investigates. 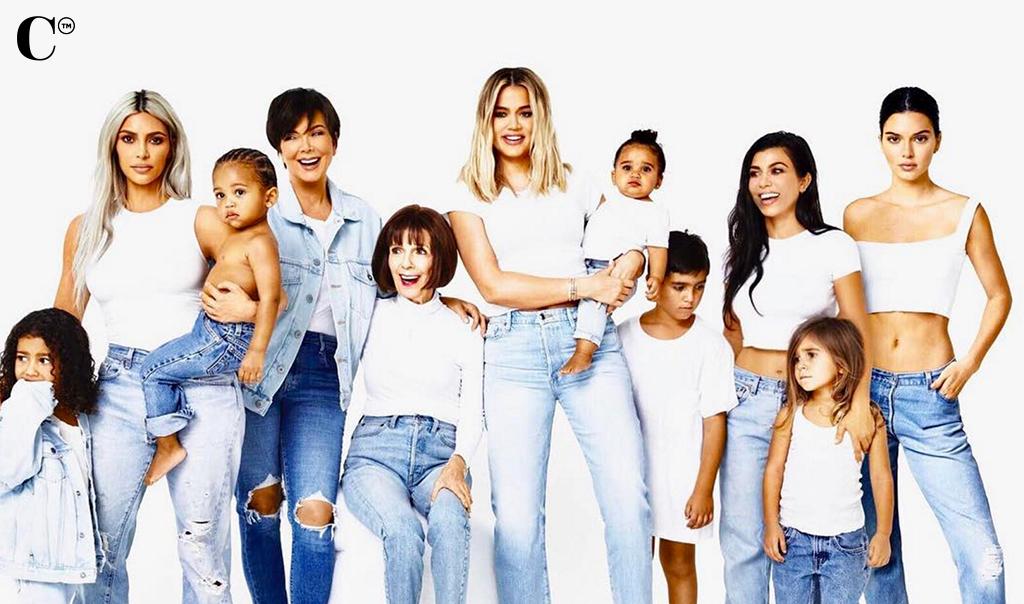 In order to determine who the first Kardashian kid to hit the big leagues will be, first you have to know who they are. While the first and second generation is divided into Kardashian and Jenners, it’s a little more complicated in the third generation, the little ones. You’ve got Disicks and Thompsons and Wests – and there are a lot of them. Let’s break it down: (Per Life and Style Mag)

This brings us next to the Jenners.

Now that we know how they’re all related, it’s time to get down to the nitty gritty and see who has it in them to become the next Kardashian billionaire. After all, with family like this – you’re bound to hit it big.

Move Over Kim and Kylie: The Next Kardashian Billionaire 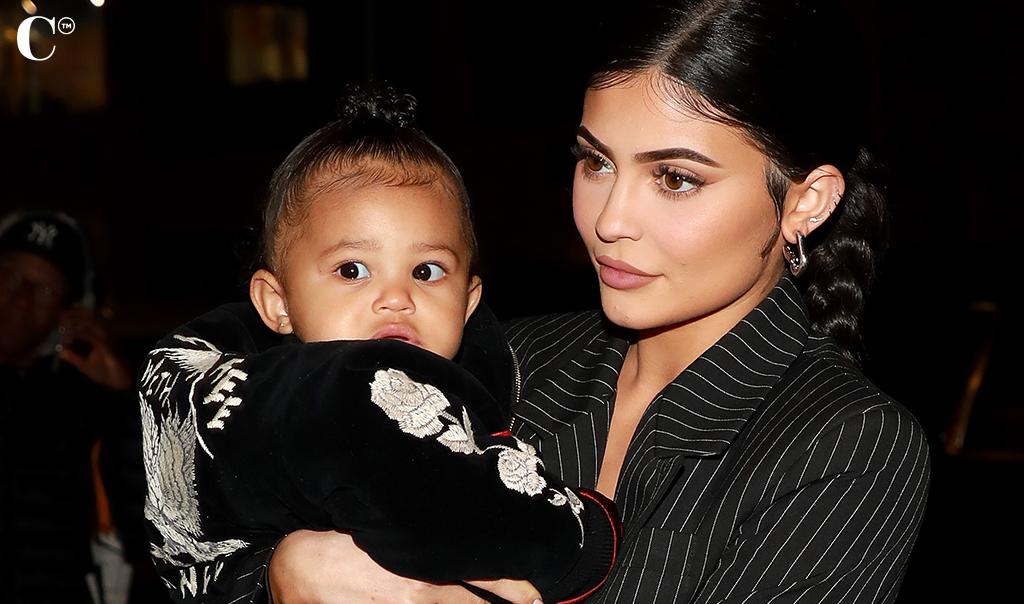 The kids are going to theoretically inherit some really huge empires. That sets them up to be wildly successful if they – and their parents before them – play their cards right. But wealth doesn’t guarantee exponential success, so which kid is likely to be the first one to earn that billionaire title in the next generation? Let’s take a look.

First, you have POOSH. Kourtney’s answer to Gwyneth Paltrow’s GOOP, POOSH is a multi-million dollar beauty and wellness brand. POOSH could go to any of her three kids – Mason, Penelope or Reign. But assuming the eldest takes the reins, Mason will hit adulthood with this wellness empire well in hand. So we’ll give this one to Mason.

Kim of course has multiple ventures, some more and some less successful. A lot of her interests are tied up with family members, making the succession to one of her four kids a little murky. But one brand that’s all her own is KKW Beauty, along with shapewear brand Skims. Let’s say as eldest North claims KKW – that leaves Skims for one of the other three, and youngest siblings are always spitfires so we’ll assume Psalm claims Skims. If KKW can dodge any major controversies, North is likely set up to inherit the more lucrative business between the two. So let’s hope it doesn’t turn out that KKW products are made from unicorn tears or something.

Khloe owns the Good American clothing brand, aimed at serving women of all sizes. Since True is an only child for now, this one’s in the bag.

Rob enjoys somewhat less notoriety than his enormously successful sisters – so while Dream could well launch a soaring business, right now this branch of the family gets to enjoy all the perks of being Kardashians, without the scrutiny. That might be the biggest win on the sly.

Kylie’s empire is as impressive as sister Kim’s, so little Stormi will inherit a booming business empire if Kylie passes it on to her. However, Stormi has one rocking advantage over her cousins – she already has her own brand. That’s right, Stormi comes in for the knockout punch in this scrap, after Kylie announced this week that the 3-year-old would soon launch her own secret brand. We’re fascinated to see how this plays out; after all, three year old fashion and beauty sense is a little sus. But when you’re a Jenner, maybe you’re born with a knack the rest of us lack.

We could get it wrong – maybe Penelope comes out of nowhere to build the better Kourtney legacy and Chicago is the next Kardashian-West superstar. But we feel confident that Stormi will be the first to attain billionaire status. The wee Jenner already has a significant head start when – if? – her secret brand comes to fruition. Of course, if this opportunity dissolves – it’s game on and anyone can take the title. 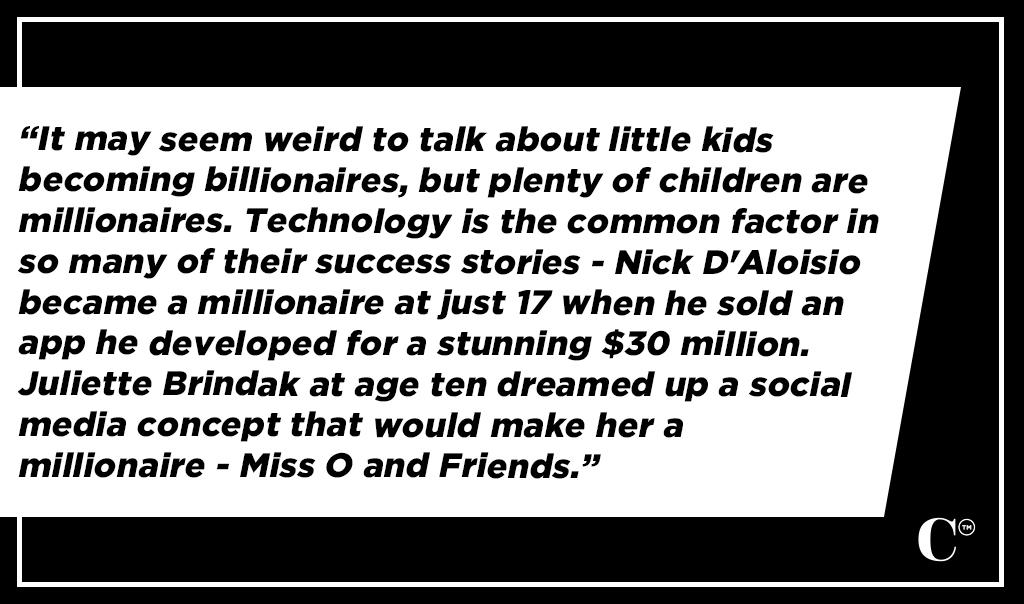 It may seem weird to talk about little kids becoming billionaires, but plenty of children are millionaires. Technology is the common factor in so many of their success stories – Nick D’Aloisio became a millionaire at just 17 when he sold an app he developed for a stunning $30 million. Juliette Brindak at age ten dreamed up a social media concept that would make her a millionaire – Miss O and Friends. Robert Nay was profiled as a millionaire by CNN at 14 – after creating a game app that briefly dethroned Angry Birds as most downloaded app.

Of course, there are some head-scratchers of ideas in there too. John Koon became a millionaire at 16 by selling aftermarket auto parts to MTV‘s Pimp My Ride. And Brennan Agronoff made millionaire bank by selling custom socks with a snappy turnaround time. And Benjamin Stern gathered enough money at his Bar Mitzvah to launch his own brand pitch – Nohbo. Nohbo is an eco-friendly solution to the overly packaged shower care industry, with each drop self containing shampoo, conditioner, body wash, or shaving cream. Shark Tank‘s Mark Cuban funded the next step in Stern’s career and he earned a cool million before graduating high school.

If these kids can start basically from scratch and build millions, the Kardashian/Jenner kids are certainly in good positions to turn their millions into billions.