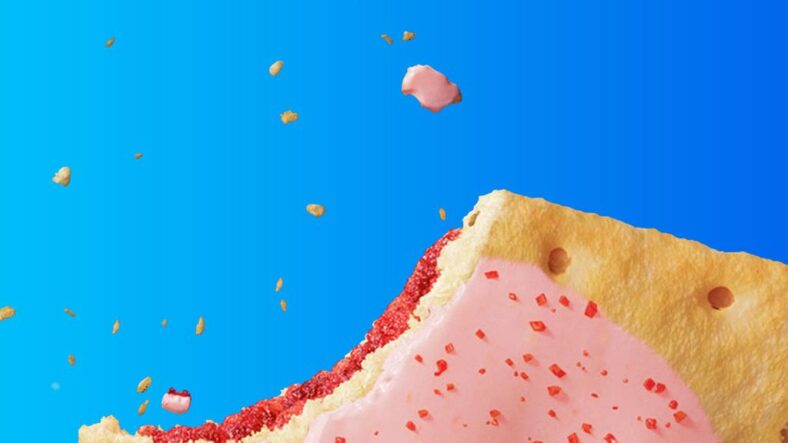 It’s the burning question that has kept men awake since the dawn of time and launched dozens of religions in quest of answers: does my Strawberry Pop-Tart contain enough strawberries? Okay, so maybe there’s no large swath of people actually asking this question, although it’s possible there’s a religion or two out there dedicated to the popular morning pastry. But there is one woman who’s taking her quest for answers to the courts, and asking for $5 million in relief from Kellogg’s, alleging that their Strawberry Pop-Tarts don’t contain enough strawberries. What does that mean? Well, the courts get to decide – the rest of us aren’t quite sure.

Pears and Apples and Lies, Oh My! 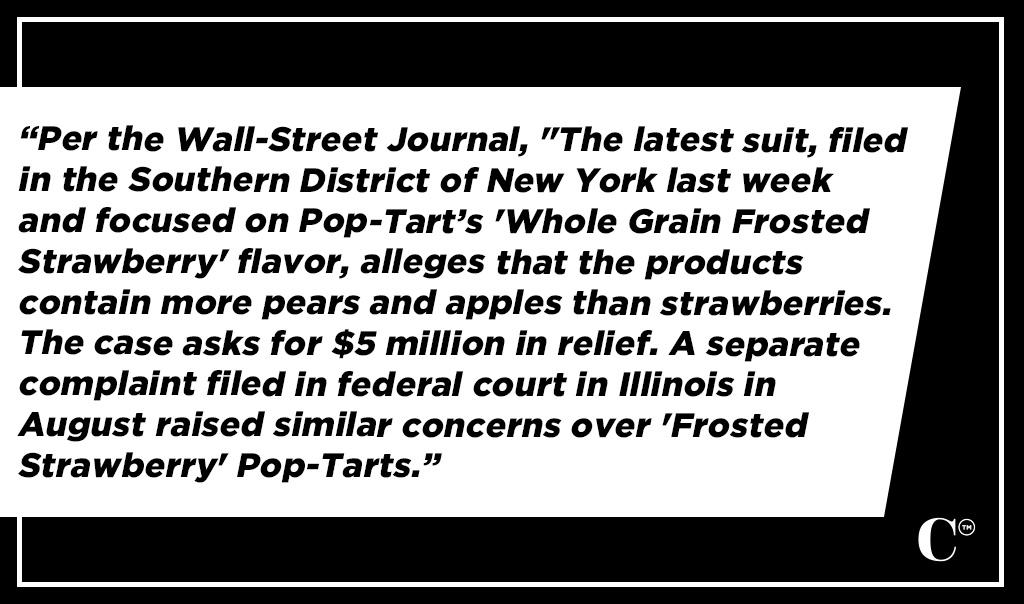 When you bite into your morning Pop-Tart, is it strawberries you taste, or lies? That’s what one New York woman hopes to force Kellogg’s to answer in a new lawsuit filed with the Southern District of New York. Believe it or not, this is the third such lawsuit filed over the last year asking if Kellogg’s is sitting upon a throne of lies or if their products really are bursting with strawberries as the packaging suggests.

Per the Wall-Street Journal, “The latest suit, filed in the Southern District of New York last week and focused on Pop-Tart’s ‘Whole Grain Frosted Strawberry’ flavor, alleges that the products contain more pears and apples than strawberries. The case asks for $5 million in relief.

‘The Product’s common or usual name of ‘Whole Grain Frosted Strawberry Toaster Pastries,’ is false, deceptive, and misleading, because it contains mostly non-strawberry fruit ingredients,’ according to the latest Pop-Tart complaint.”

We’re actually surprised to hear that there’s real fruit in them at all – be it pears, apples, or strawberries. Maybe we won’t feel so guilty next time we unwrap that silver foil and dive into a Strawberry Pop-Tart; if we can forgive all the lying, that is.

The goal of the lawsuit is to force Kellogg’s to be more transparent in their packaging. While the lawsuit is a little silly, we can all benefit from more honest ingredient packaging. For instance, those with allergies should be able to steer clear of their triggers, and people with diet restrictions also deserve the honesty. But when it comes to flavor? We hope they don’t change it. Kellogg’s is mum on the whole thing as they don’t respond to ongoing litigation. 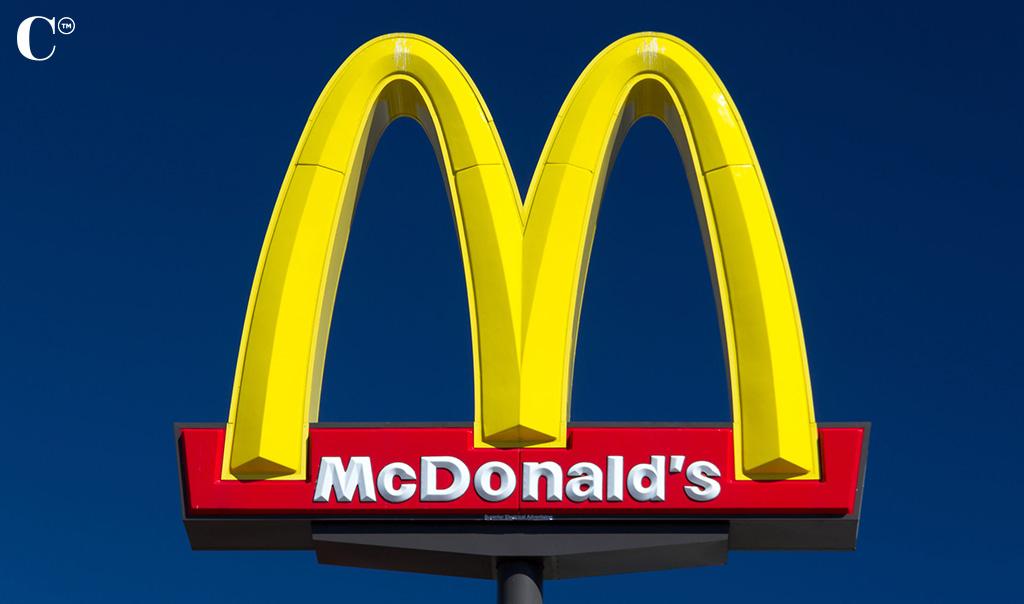 This is far from the only apparently frivolous lawsuit our great society has conjured over the years. And it would also be far from the only such lawsuit that creates positive change. Remember the lawsuit from the woman who spilled hot coffee and sued McDonalds? It turns out that lawsuit wasn’t frivolous at all. The employees at that McDonald’s ignored temperature guidelines and the woman was so badly burned across her legs and pelvic region that it took over two years for her recovery. Stella Lieback, 79, was left with 16% of her body having sustained third degree burns, including across her genitals and buttocks.

That’s a pretty rock solid reason to sue, and it forced McDonalds to reevaluate and strictly enforce the temperature on their hot beverages. But that lawsuit is often pulled up as the gold standard of frivolous, even if we know now that it’s far from silly. There are actually penalties and fines that can be levied against cases considered to be too frivolous, as the court isn’t looking to waste time and money on petty bickering. There are however certainly enough lawsuits over the years that have us scratching our head. But like the McDonald’s suit, there’s usually much more than meets the eye.

On Pop-Tarts and Other Fine Dining Options 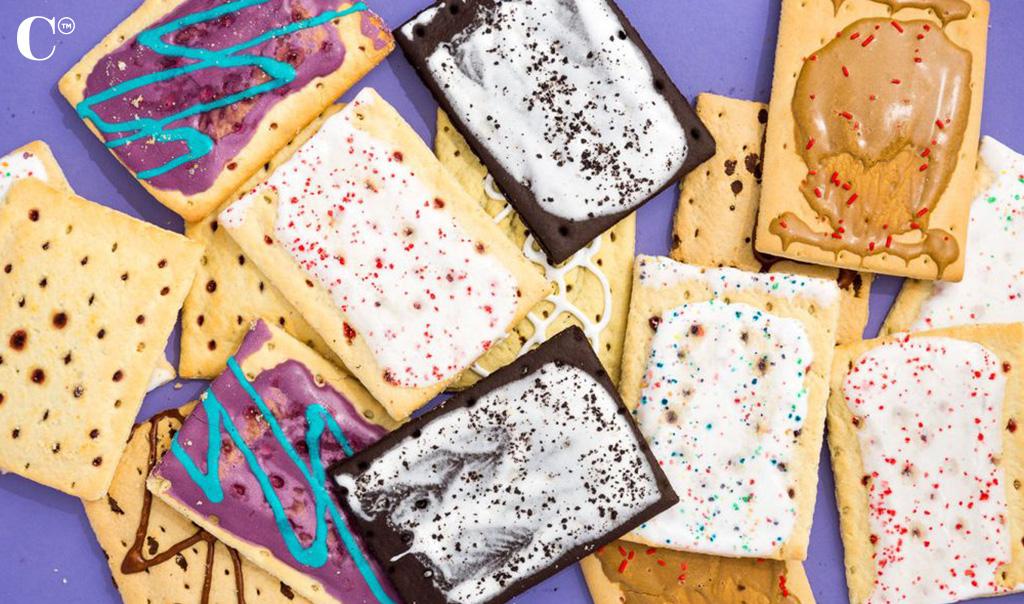 The meat of the Strawberry Pop-Tart lawsuit – if you’ll forgive our pun – may seem a little silly, but there is growing concern over the honesty on food labels. Take Coca-Cola for instance. They’re required to list their ingredients, but there’s that pesky “natural flavors” section. Of course, it’s a ploy to protect their age-old secret recipe. But what does it contain, and who may be susceptible to those ingredients? Because of the way labeling is handled currently, there are no solid answers.

Buzzwords like “antibiotic free,” “all natural,” and “Organic” lure shoppers into a false sense of control and insight into their food, when they’re basically meaningless. Sugar content is often downplayed even though consumable products are required to break it down by number and daily percentage of an average diet.

So what are we really eating? Is it a pear, or is it a strawberry? Hopefully the new Pop-Tart lawsuit – as silly as it is – will help further the cause of more honest and open labeling, which is good for everyone. In the meantime, don’t trust your Pop-Tarts. Or do; we won’t judge.